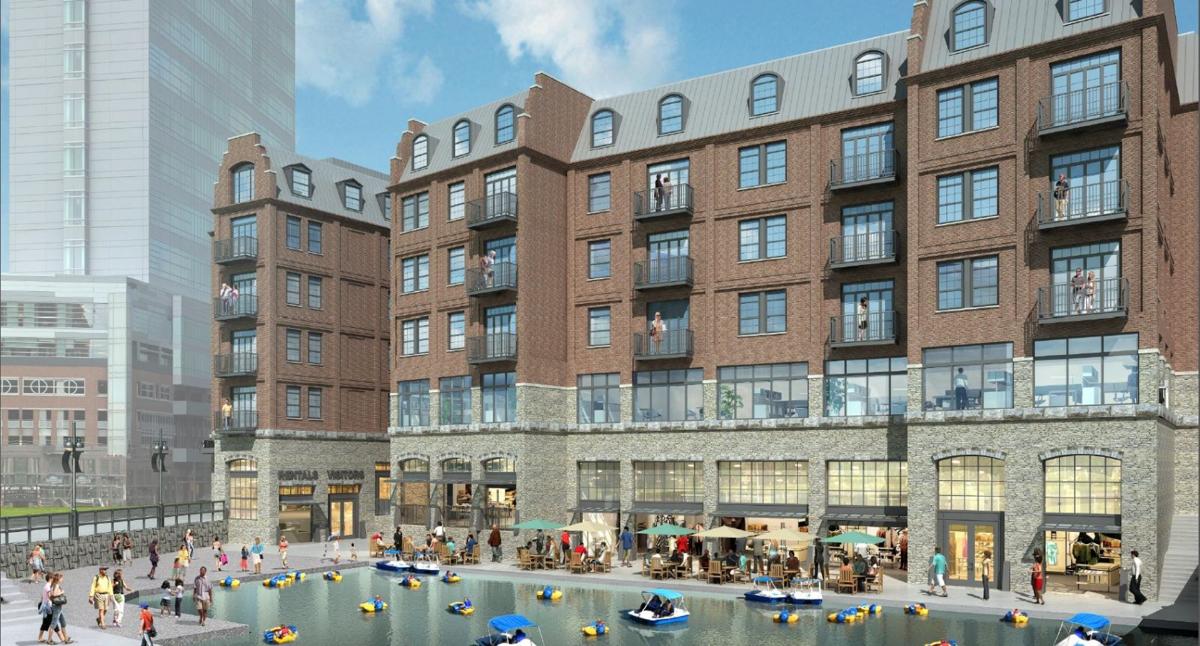 A rendering of Heritage Point, the new mixed-use project proposed for Canalside by developer Nick Sinatra. (Image courtesy of the Buffalo Planning Board) 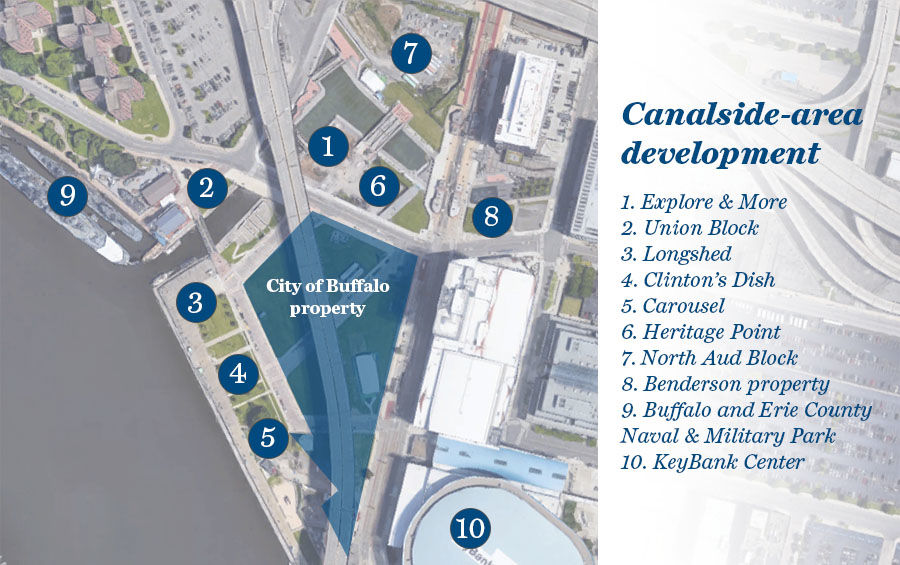 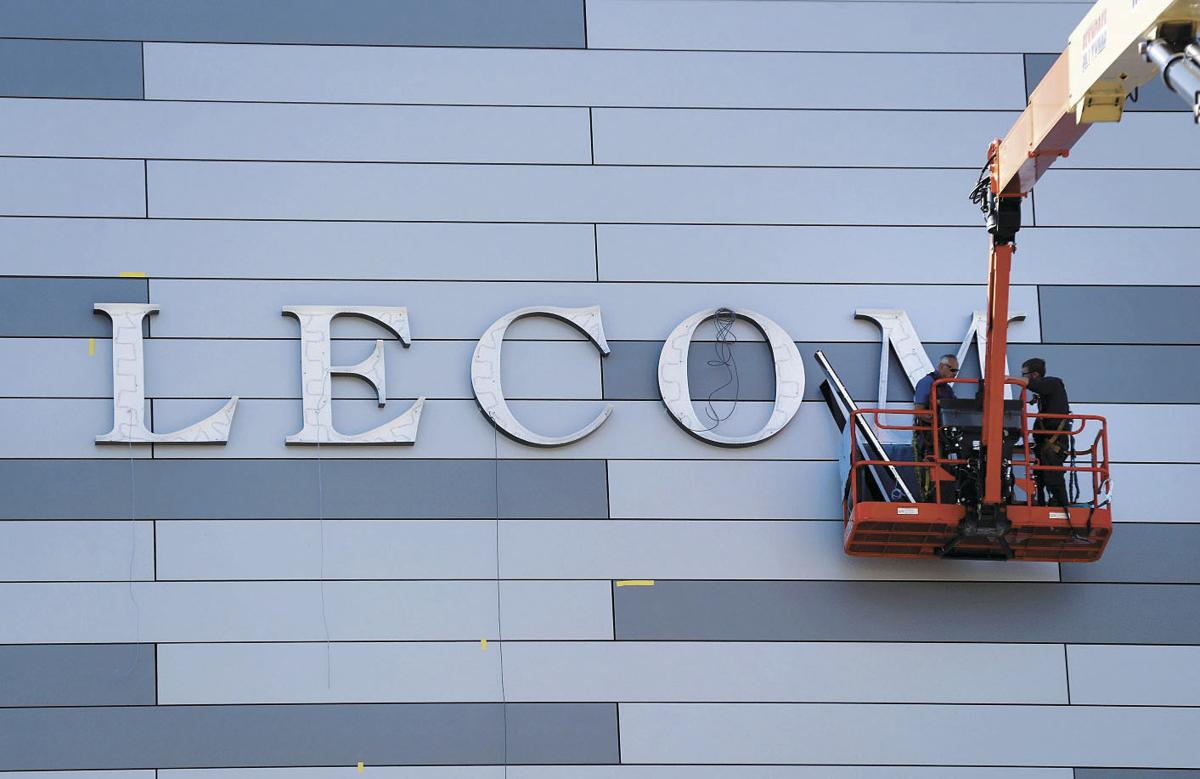 Crews put the letters on the outside of the Lecom Harbor Center in Buffalo Tuesday, September 17, 2019. (Mark Mulville/Buffalo News) 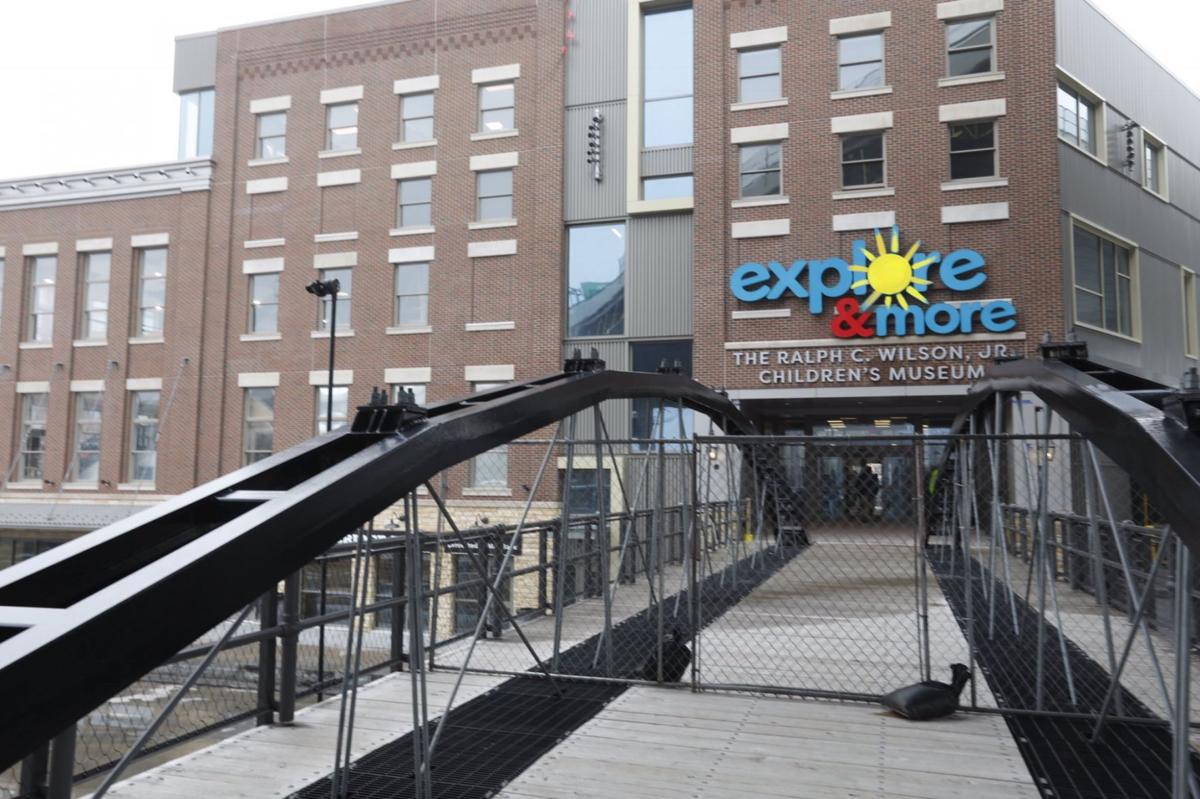 It's also about to get a lot more crowded.

A planned roundhouse carousel building and the first new residential project at Canalside are poised to get the go-ahead from state officials when the Erie Canal Harbor Development Corp. meets on Oct. 15.

The two designs for the Buffalo Heritage Carousel Roundhouse and Nick Sinatra's Heritage Point won the backing of the Buffalo Planning Board earlier this week. If the project gets approval from the harbor development agency, cleanup and construction work could begin shortly.

The $26 million investments will eventually bring two six-story buildings and the one-story roundhouse to Canalside. They will join the new Explore & More – Ralph C. Wilson Jr. Children's Museum, which opened in the spring with four floors of exhibit, lobby and cafeteria space.

The projects are part of a series of major developments that will bring big changes to Canalside. Beyond the carousel and Heritage Point projects, Benderson Development Co. is planning a five-story mixed-use building on a narrow lot at the corner of Washington and Scott streets. And work has begun on the planned Longshed – a two-story gabled-roof wood structure along the Canalside boardwalk that will house a two- to three-year effort by the Buffalo Maritime Center to build a replica 19th-century packet boat.

Those projects will be sandwiched between the 18-story LECOM Harborcenter, built a few years ago by Terry and Kim Pegula on a former parking lot, and the six-story One Canalside, which Benderson previously converted from a state office building into a Courtyard by Marriott hotel and the headquarters for the Phillips Lytle law firm.

And ECHDC still intends to seek additional projects for the North Aud Block, with more mixed-use buildings to come. Gov. Andrew M. Cuomo has committed $10 million to help the agency move forward with that section of Canalside.

"This has been the long-term plan to turn Canalside into a neighborhood, and we’re finally starting to see what I think is the second wave of construction," said Steven Ranalli, president and CEO of ECHDC, the state agency that is shepherding the development of Buffalo's waterfront. "Every step just builds confidence in the Canalside area, and the developments are feeding off each other."

State officials and developers say it's part of an orchestrated effort to ensure harmony in the designs, to hearken to the way Buffalo looked in its earlier days. They say the plans will retain the Great Lawn at Canalside and won't make the now-spacious area feel like it's a narrow strip fenced off by a wall of tall buildings.

"They’re all very complementary of each other," Ranalli said. "All these amenities build off each other. So I think everyone has done a great job of adding and complementing as the development goes forward."

All of which says that Western New Yorkers and visitors can expect a very different-looking Canalside in three years.

The pending start of the new projects shows how far Canalside has come in the last decade, after officials turned their attention from a failed Bass Pro Shops megastore at the Inner Harbor to a series of smaller and quicker efforts to reactivate the vast and underused swath of land.

"I think this is entirely consistent with the strategic plan, which is to create first and foremost a destination for the public to use," said Rep. Brian Higgins, a longtime advocate for waterfront development. "I think this is what all of us had envisioned Canalside would become a little more than a decade ago. The days of master plans collecting dust on a shelf, those days are over."

It also shows how much the district has matured, as efforts shift from bringing low-cost and ground-level entertainment to filling in the remaining empty acreage with apartments, offices, restaurants and stores.

"This is the natural build-out of Canalside, which will become a community made up of commercial and residential mixed uses," Higgins said. "Our vision, moving forward, is to position Buffalo, much like it was a major port of shipment in the country, as a premier recreational boating destination on the Great Lakes and Southern Ontario. And you do that by the kind of quality developments that are going to be the next phase."

That's where the new building boom comes in. Higgins cautioned, however, that the development should not become too congested or too high so that it cuts off mobility and access.

"You certainly don’t want to wall Canalside off," he said. "You want to give it the feel of a place that is publicly accessible."

Ranalli also stressed that green space and public access will remain central components. The Great Lawn that will "always remain in place," as will the various canals, historic streets and bridges between the buildings, he said.

"It may not be grass," he said, "but there will be a lot of open space and public realm for people to enjoy."

"I think these developments at Canalside complement the idea that getting people outside – walking, biking, kayaking – will drive our region’s revitalization," said Jajean Rose-Burney, the deputy executive director of the Western New York Land Conservancy. "New developments at Canalside, being directly downtown, strengthen our urban core and allow open spaces farther from downtown to remain open."

The planned Roundhouse structure is designed to house a fully restored 1924 wood DeAngelis Carousel, which was originally made by the Herschell-Spillman Carousel Cos. in North Tonawanda. Located next to Clinton's Dish and the Canalside beach, it will be operated from March through late fall by the nonprofit Buffalo Heritage Carousel, which will charge $1 per ride after its planned opening in July.

The $5.3 million project includes a $4 million octagonal timber-frame pavilion, constructed of treated natural Douglas fir, with glass enclosing it on five sides and doors that can be opened to the air. The one-story building will feature an interior public viewing walkway around the inside, a double-pitched black metal roof with blue solar-panel Bermuda shingles and a cupola on top. A triangular connecting room on the south side will house a heritage display.

On the other end of Canalside, the $21 million Heritage Point project calls for two uniquely shaped buildings to occupy two parcels of the South Aud Block – a lawn area and a gravel construction site, near the statue of Tim Horton and the Metro Rail station. Both buildings would be six stories in height, with brick and gray stone facades and mansard roofs to comply with ECHDC standards and mimic the historic look of the area.

The ground floors of each would include a bar, restaurants and retail space, with the possibility of patio areas spilling out into a public access alley between the buildings that will follow part of the route of the former Prime Slip. No tenants have signed on yet, said Amy Nagy, director of development for Sinatra & Co. Real Estate.

Upstairs, the project would include 61 one- and two-bedroom apartments, with 41 in the larger building on floors three through six, and 20 in the other one on the top five floors. The larger building also would have a level of office space on the second floor.

Most of the apartments would be leased at market rates, but the project includes some affordable housing as well, Nagy said. The interior finishes and rents have not yet been finalized, she said, but "we have received a lot of good market feedback on the rental units, and we are working with several potential tenants with letters of interest."

The brownfield site must first be cleaned up, so Sinatra officials plan to start environmental investigations this fall and winter, followed by the cleanup work in the first quarter of next year. Construction would begin in the second quarter of 2020, with completion in summer 2021.

The project does not include its own parking, but Nagy said the developer is negotiating for some "adjacent but closely connected offsite parking."

"We aware that this is Buffalo and people still do drive," she said.

Plans for Benderson's newest building have not been released, but the developer is now looking at a possible hotel for the long-awaited new project – whose previous iterations have also included restaurants and apartments.

The harbor development agency is in the planning process, bringing options forward for public comment and working with stakeholders to refine a preferred concept for the North Aud Block by year-end, Ranalli said.

"It’s always helpful for us and for the development community to have a little more certainty," Ranalli said. Once Benderson finalizes its hotel plan and Sinatra lays out the first-floor restaurant concept, he added, "it makes it that much easier for developers to envision themselves in the North Aud Block."

The goal is to update the Canalside general project plan, complete an environmental review and start issuing requests-for-proposals for private development on the site by the middle of next year, Ranalli added.

"I think that’s what that area has really been looking for and wanting," Nagy said. "They really have been looking to make that a broader-built environment so people can continue to come down and enjoy all the attractions that have been invested in."

Erie County's "orange zone" isn't a total shutdown of essential businesses, yet some here are closing down preemptively.

A rendering of Heritage Point, the new mixed-use project proposed for Canalside by developer Nick Sinatra. (Image courtesy of the Buffalo Planning Board)

Crews put the letters on the outside of the Lecom Harbor Center in Buffalo Tuesday, September 17, 2019. (Mark Mulville/Buffalo News)