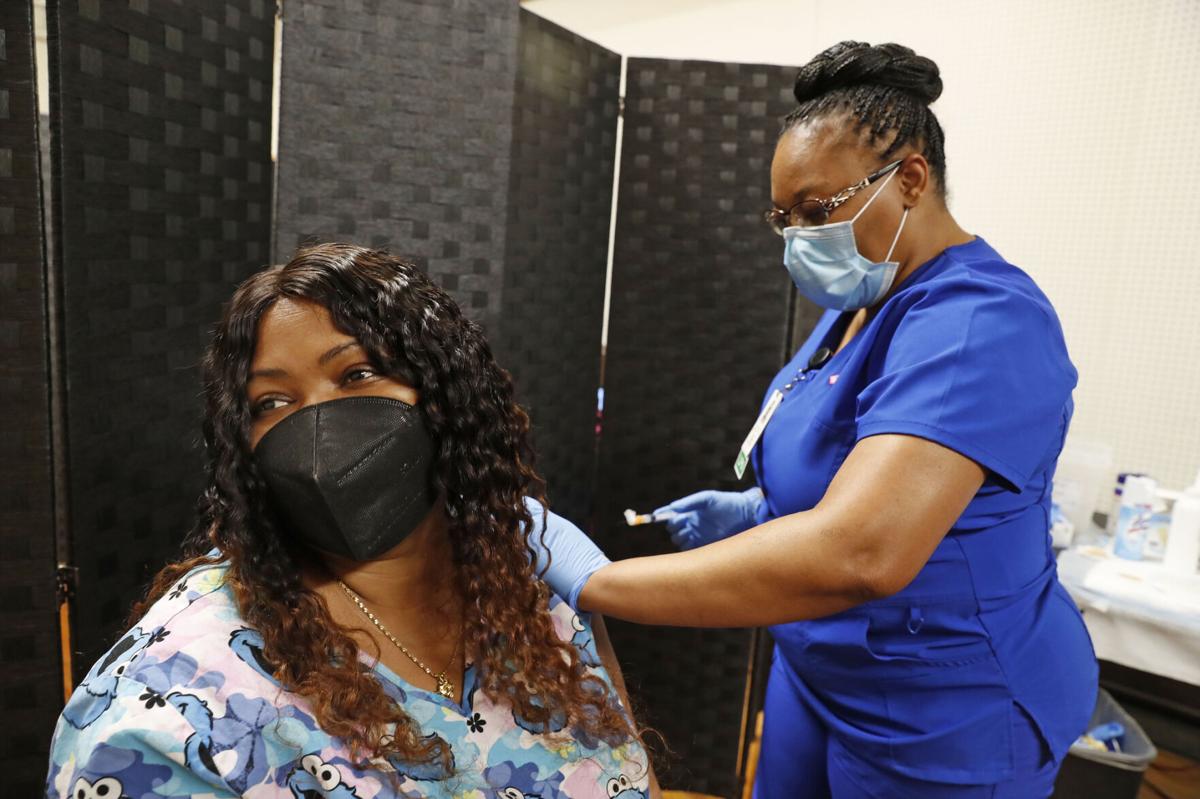 Tasheaka Jones of Buffalo gets her first dose of the Moderna vaccine from nurse Danesha McLaughlin at the Jericho Road Community Health Center on Broadway. 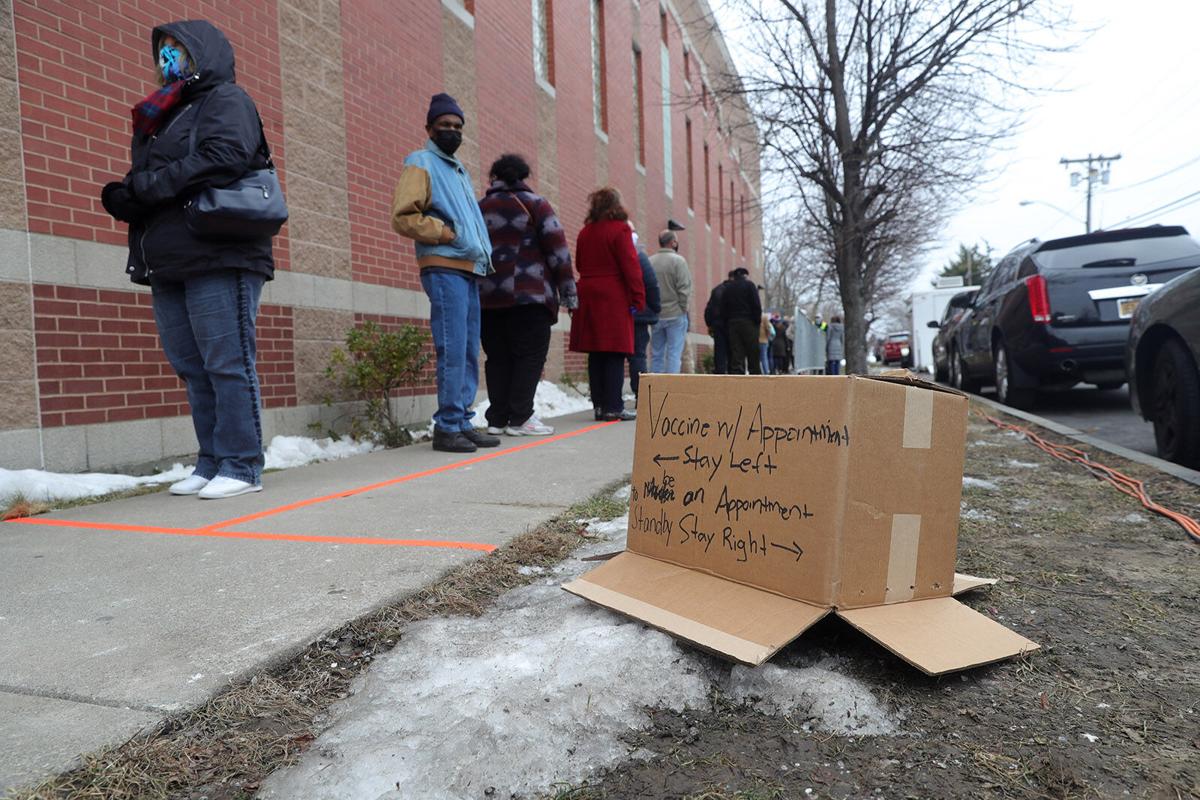 Earlier this month people waited outside to enter the Delavan Grider Community Center to get a Covid-19 vaccination or to make an appointment. The mass vaccination at the community center targeted Buffalo ZIP codes to reach traditionally-underserved neighborhoods with higher infection rates and more hesitancy about the vaccine.

The Rev. William Gillison, pastor of Mount Olive Baptist Church on East Delavan Avenue, was reluctant "very early on" to get the Covid-19 vaccine.

There was so much information and misinformation being disseminated, he said, that no one knew what to believe, which caused not only fear but also hesitancy among Black Americans and even the larger community.

“But once I began to know more about exactly … how the Pfizer drug and Moderna actually came about, then with that information, the hesitancy ceased for me,” he said, referring to the first two vaccines that received emergency use authorization in the U.S.

Barnwell, a college-educated Buffalonian who works as a counselor in behavioral health, has asthma, a medical condition that makes her more susceptible to Covid-19 and therefore eligible for a vaccine.

“It’s not a definite 'no' for me,” said Barnwell, who is Black, but she added she may not get the shot unless it becomes mandatory.

She points to a host of reasons for not getting the injection.

For one, she’s concerned about the drug’s long-term effects, especially on pregnant women should she consider having a child. She is also skeptical of the government, largely based on what she has heard about the infamous Tuskegee experiment, a decadeslong syphilis study that started in the 1930s during which federal officials enrolled hundreds of Black men in Tuskegee, Ala., in an experiment to examine the effects of untreated syphilis.

Her skepticism peaked once the government started focusing on making the vaccine more available to the Black community, she said.

“This just seems a little fishy," she said. "Why are you all so gung-ho to give us the vaccine when anything else we’ve ever asked for we had to fight for to get?"

Hesitancy like hers – and Gillison's, before he learned more about the process – is one reason politicians and public health experts say Blacks and Hispanics are getting vaccinated at a lower rate than whites in Western New York and nationally. That's despite the fact that a disproportionate number of African Americans and Latinos have died from the virus in the United States.

"We still have not reached fairness and equity in the number of vaccines," Gov. Andrew Cuomo said Monday as he announced an initiative to have houses of worship become vaccine centers with the state supplying the vaccine.

“Yes, the vaccine is safe. Yes, the medical community has said it, but I believe when the religious community says it, it’s going to bring an added credibility,” Cuomo added.

A November 2020 study by researchers at the schools of medicine at Stanford and Duke universities found that Blacks and Hispanics comprised 58% of all patients hospitalized for Covid-19 – far outpacing their percentages of the national population – and 53% of those who died from the disease.

In Buffalo, predominantly Black and brown neighborhoods such as the East Side's 14215 ZIP code and 14201 on the Lower West Side have higher infection rates. They were among 10 Buffalo ZIP codes initially targeted for mass vaccination at the Delavan Grider Community Center to reach traditionally underserved neighborhoods with higher infection rates and more hesitancy about the vaccine.

Access to vaccines is a big problem for minorities. But so is hesitancy, said Dr. Raul Vazquez, who has run his Urban Family Practice on the city’s Lower West Side for the past 30 years. He opened a second location in 2018 on Jefferson Avenue on the East Side. About 94% of his patients are Black or brown, he said.

“There is going to be hesitancy. I think the more we orient and teach people the benefits of the vaccine, then we’re going to get through the obstacles,” said Vazquez, who participated earlier this year in a virtual "Fireside Chat" sponsored by the state Covid-19 Vaccine Equity Task Force that explored the historical context and the science behind the vaccine.

Last month, Vazquez helped immunize about 350 at the Belle Center on Maryland Street on the Lower West Side as part of New York's strategy for reaching Black and Latino communities.

A need for more information

“You can’t just set up a website and say you can enroll for a vaccine or call an 800 number. You’ve got to get people warm bodies to talk to so that their questions can get answered,” he said. “What I’ve discovered over the course of the last few weeks is that the more information you give people, the more likely they are to decide to vaccinate.”

The Tuskegee experiment used Black men as guinea pigs, letting their syphilis go untreated in order to study the disease. In the 1950s, Puerto Rican women were similarly misused in the development of the birth control pill, with researchers using them because many state laws on the mainland prevented such experimentation. And the 1970s saw the forced sterilization of roughly a quarter of Native American women of child-bearing age.

“When you factor those things in, that’s an institutional memory that people have ingrained in their DNA," Pointer said.

George F. Nicholas, pastor of Lincoln Memorial United Methodist Church and co-organizer of the African American Health Equity Task Force, said hesitancy has been a factor, but the issue has been “overblown,” referring to national data showing that more Black people than white want to get the vaccine.

According to a national survey released March 12 by NPR/PBS News Hour/Marist, of the 1,227 adults polled, 73% of Blacks and 70% of whites said they either planned to get the vaccine or had done so already. Similarly, near equal percentages of Blacks (25%) and whites (28%) said they are reluctant to take the coronavirus vaccine. Among Latinos, 63% either had or intended to get a vaccine, while 37% were reluctant.

"I think it’s availability," Nicholas said, explaining the gap in vaccination rates if roughly equal percentages of Blacks and whites say they want the shot. "It’s one thing to be out there advocating for Black folks to go out and get this vaccine, and then not having those vaccines available. I think once we resolve the issues about access, I think you’ll find a great deal more African Americans taking advantage of getting the vaccine."

In fact, ideological differences appear to have much more impact than race when it comes to who wants to get vaccinated. A poll released last week from the Associated Press-NORC Center for Public Affairs Research found that 42% of Republicans say they probably or definitely will not get immunized, compared with 17% of Democrats.

Initially, there was a great deal of hesitancy among Blacks, Nicholas agreed, because of the history of “how our Black bodies have been experimented on and mistreated in this country in the health care system, and so the notion of the vaccine was problematic for a lot of people.”

But sentiment is changing, he added, as people became aware that Black scientists and researchers were involved in the development of the vaccines, like National Institutes of Health scientist Kizzmekia Corbett, who helped develop the Moderna version. He also noted that historically Black colleges and universities like Meharry, Howard and Morehouse conducted clinical trials for a vaccine developed by Novavax that is expected to seek Food and Drug Administration emergency use authorization in May.

In addition, African American scholars, medical professionals and others are educating the community that the vaccines have been vetted properly by the Centers for Disease Control and Prevention and the FDA and are safe.

Local efforts to build trust in the vaccine include "Telling the Whole Truth – Uncovering the Medical Mistrust,” a series of virtual town hall meetings on the Covid-19 vaccine that began last month, hosted by the Buffalo Common Council, the Buffalo Center for Health Equity and 1199 SEIU/Healthcare Education Project. The educational discussions are targeted at local Black and brown communities that have been adversely impacted by the pandemic.

Amid the campaigns to overcome vaccine hesitancy, Gillison has his own advice for other people of color – like Barnwell – who may still be unsure.

“If we feel white folks are trying to do something,” he said, “keep in mind, they’re taking the vaccine, too.”

More people are eligible, but vaccine allocation reduced in WNY this week

Dr. Nancy Nielsen, who heads a local committee on vaccination planning, said Monday that 27,510 doses have been sent to Erie, Niagara, Chautauqua, Cattaraugus and Allegany counties for this week.

People Inc. and the Mt. Olive Baptist Church want to construct a three-story complex for lower-income seniors that will eventually be owned and run by the church's nonprofit development arm.

As of Thursday, only 3.6% of the Niagara County residents who have received at lease one dose of the vaccine are Black, according to the state Health Department's vaccine tracker.

With no easy way to verify Covid-19 vaccine eligibility, people are on the honor system

Who double-checks to ensure vaccinations go only to those eligible? The answer, for the most part, is no one.

No computer. No smartphone. How are you supposed to get a vaccine?

Many at the highest risk of getting severely sick or dying of Covid-19 are also the least likely to have the technological access and ability to get themselves a vaccine appointment.

Tasheaka Jones of Buffalo gets her first dose of the Moderna vaccine from nurse Danesha McLaughlin at the Jericho Road Community Health Center on Broadway.

Earlier this month people waited outside to enter the Delavan Grider Community Center to get a Covid-19 vaccination or to make an appointment. The mass vaccination at the community center targeted Buffalo ZIP codes to reach traditionally-underserved neighborhoods with higher infection rates and more hesitancy about the vaccine.