Mayor Byron W. Brown has launched a petition drive to try and gain an independent line on the Nov. 2 ballot by disputing the petition filing deadline set earlier this year by the State Legislature. Brown's campaign is arguing in favor of the previous deadline, which would expire on Tuesday, but it would not cite the legal justification for its interpretation.

The Democratic and Republican commissioners at the Erie County Board of Elections on Sunday confirmed they were aware of the effort by the four-term mayor.

Jeremy J. Zellner, the Erie County Democratic Committee chairman and also the Democratic Board of Elections commissioner, said Brown contacted him last week and informed him that nominating petitions were being circulated to place his name on the November ballot as an independent candidate.

“The mayor called me and told me they were going to take this on and that they thought they have some case law,” Zellner said of court decisions. “I believe the state law is the state law, and until I get some more information from the county attorney and our counsel at the Board of Elections, I’m not going to talk about it.”

Zellner is supporting Walton for mayor after she won the party's primary with 11,718 votes to Brown’s 10,669 votes, according to certified results from the county Board of Elections. Walton's campaign late Sunday dismissed Brown's petition effort as "antics."

In explaining what that means, Erie County Republican Elections Commissioner Ralph M. Mohr said: “Under the new law, the filing of independent petitions was between this past May 18 and May 25. The change was due to the date of the primary being switched from September to June.”

Sofia Quintanar, spokeswoman for the Brown campaign, said the independent petition drive to try and place the mayor’s name on the ballot is viewed as an effort to better his chances for re-election.

“Due to the record low turnout during the Democratic primary, we felt it made sense to pursue this avenue to make sure every voice in Buffalo is being heard,” Quintanar said.

"I think in many ways this is a blessing in disguise," Brown said of his first defeat at the polls in 28 years, "because it is energizing the community and bringing the community together in ways I have not seen in a very long time."

As for case law suporting Brown's position, Quintanar said, “We are going through the process and not going to discuss the legal strategy at this point.”

"For a man who doesn’t even have a platform on his website, Mr. Brown certainly seems to have plenty of time for antics designed to author confusion," Myerson said. "While he focuses on devising new distractions, the Democratic nominee will continue talking with everyday Buffalonians about the issues that matter to them, and gearing up to assume office and build a safe, healthy Buffalo."

Pursuit of an independent ballot line for Brown, at this juncture, is a viable option, Quintanar said. She added that, at the same time, the campaign continues its write-in effort for the mayor.

A write-in effort requires each voter to write the candidate’s name in a box on the paper ballot, rather than fill in a circle beside a candidate’s name that is already listed on the ballot.

Could Buffalo's mayoral race be a $10 million campaign?

Both Byron Brown and India Walton are frantically preparing behind the scenes for the post-Labor Day blitz.

“We have so many people across the city in every district working on the 'write down Byron Brown' campaign and we are confident that one of these efforts will assure that the mayor wins on Nov. 2,” Quintanar said, adding that the campaign demonstrated broad support when “more than 1,000 supporters” recently showed up at a rally at Brown’s new campaign headquarters on Washington Street.

The Brown campaign says that though it agrees with the figure of 750, it is seeking more than 1,500 signatures to avoid any legal question should that become an issue.

Zellner and Mohr said that once the expected independent nomination petitions are submitted to the Board of Elections, they will schedule a hearing to rule on whether Brown will be placed on the Nov. 2 ballot.

Mohr declined to offer an opinion on the mayor’s effort, noting that he will be one of the people making the decision.

If the decision goes against Brown, his campaign officials said they expect to take the matter to court and have a judge rule on whether the mayor can be on the ballot.

And though Zellner is supporting Walton, he said he does not see a conflict of interest in deciding the question of whether Brown can be placed on the November ballot as an independent candidate.

“My job is to uphold my oath of office and to follow the law,” Zellner said, dismissing any notion of a potential conflict of interest.

John W. Conklin, spokesman for the State Board of Elections in Albany, said the petitions are a matter for the local elections board, but added that the statewide political calendar is not “a discretionary document,” and that established legal provisions dictate “what the dates are.”

If, however, the matter went to court, Conklin said: “It wouldn’t be the first time somebody went into court with the idea that they are going to change settled law. Everybody thought that the governor couldn’t appoint a lieutenant governor for decades and then Gov. David Paterson did and the state Court of Appeals said ‘sure.’ ”

Petitions for Brown’s effort to gain an independent line on the ballot began circulating Wednesday, according to campaign officials.

Not everyone can sign those petitions or serve as witnesses to the signatures, Mohr said, citing election law.

“A nominating petition can be signed by any registered voter living within the jurisdiction, the City of Buffalo in this case, who has not signed a petition for the same office,” Mohr said. “This would also exclude individuals from witnessing a signer of the petition, if they previously signed a petition.”

In India Walton's 2014 arrest, conflicting claims of threats and bullying

The Buffalo Democratic mayoral nominee was arrested seven years ago after she was accused, according to a police report, of threatening to break a co-worker's legs and saying, “I’m gonna take you out.” Walton and her accuser provide almost opposite versions of events.

Brown submitted more than 3,700 signatures on petitions to the Board of Elections Tuesday to secure an independent ballot line – called “Buffalo Party.”

Days ago, former Deputy Mayor Steve Casey signed a court document admitting that his one-man company violated federal law by engaging in a kickback scheme. It all occurred while Casey directed the workforce of New York's second-largest city – at the mayor's pleasure.

After India Walton upended the local political world by defeating Brown in last month's primary election, Buffalo's tiny band of Republicans may exert some influence yet.

At a small rally Wednesday for Democratic mayoral candidate India Walton, supporters said she was unfairly maligned in a Buffalo News report.

As people wonder what a democratic socialist might bring to Buffalo, a living, breathing example already exists in New York: the state Legislature.

In a recently closed campaign reporting period, Walton, a political newcomer and democratic socialist, raised an average of $6,000 per day in a 33-day period, most of it after her June primary win.

India B. Walton and Byron W. Brown barely acknowledged each other from opposite ends of a stage as they urged permanent status for a new $300 per child tax credit about to benefit thousands of children throughout Western New York and the nation.

Supporters are gearing up to provide whatever help – money, phone and text calls to Buffalo residents and knocking on voters’ doors across the city – that Walton needs.

Analysis: A mayoral contest for the Buffalo ages

Watch for the matchup between India Walton and Mayor Byron Brown to consume the region, Bob McCarthy says. 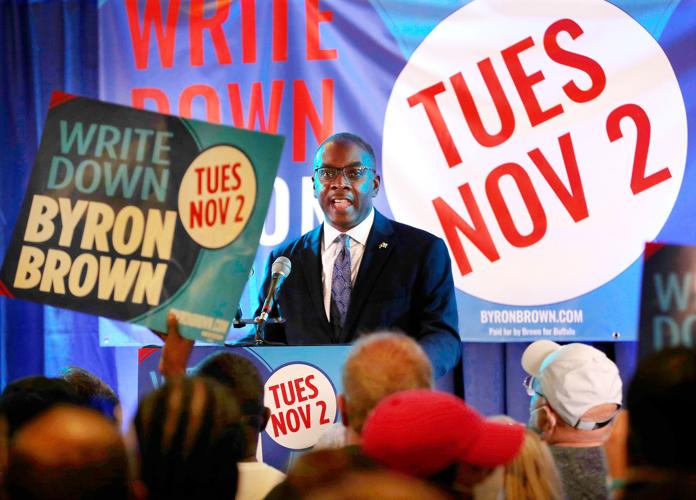 In addition to running a write-in campaign to try to win a fifth term, Mayor Byron W. Brown is now mounting a petition drive to get an independent ballot line, challenging state law that says the deadline for such an effort has passed. (News file photo) 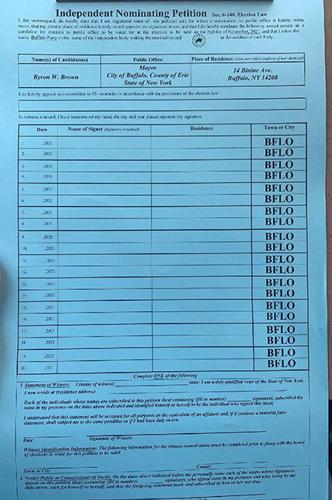 The petition circulated by Byron Brown in an attempt to gain an independent line on the ballot in November's mayoral election.