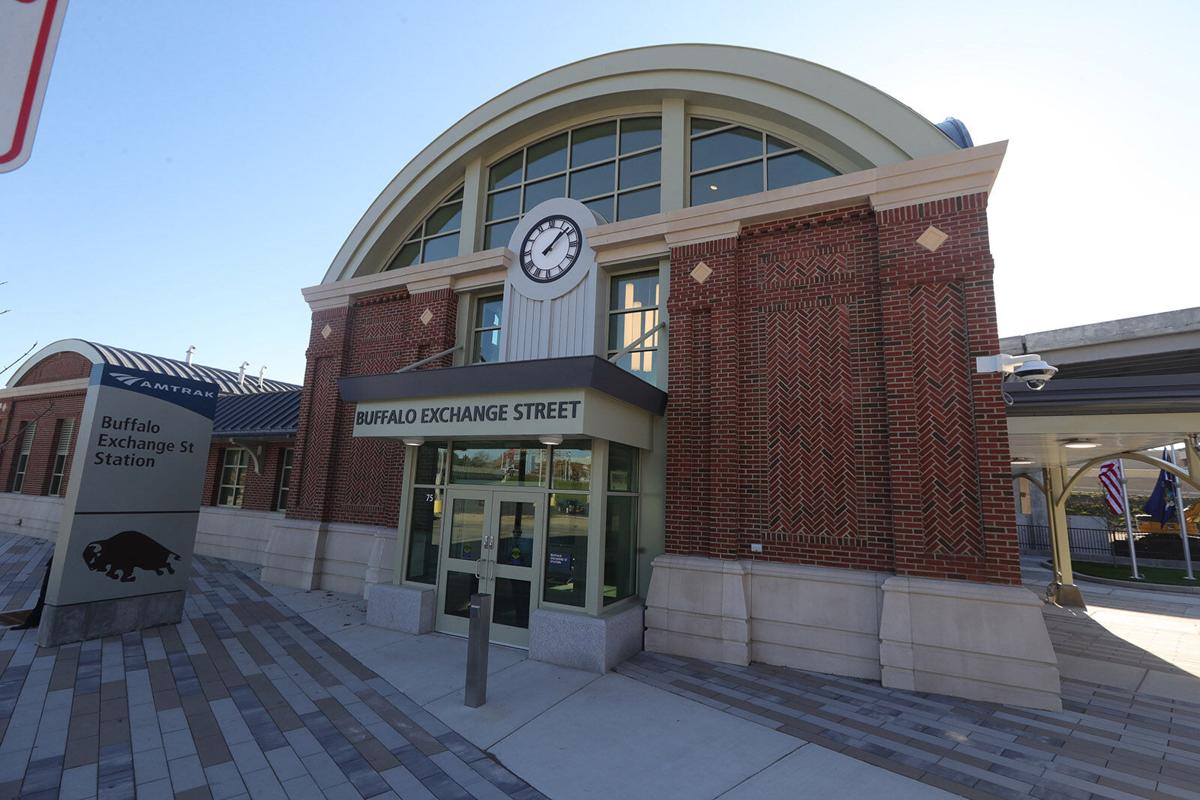 Visitors are impressed with the new Buffalo Exchange Street Station. 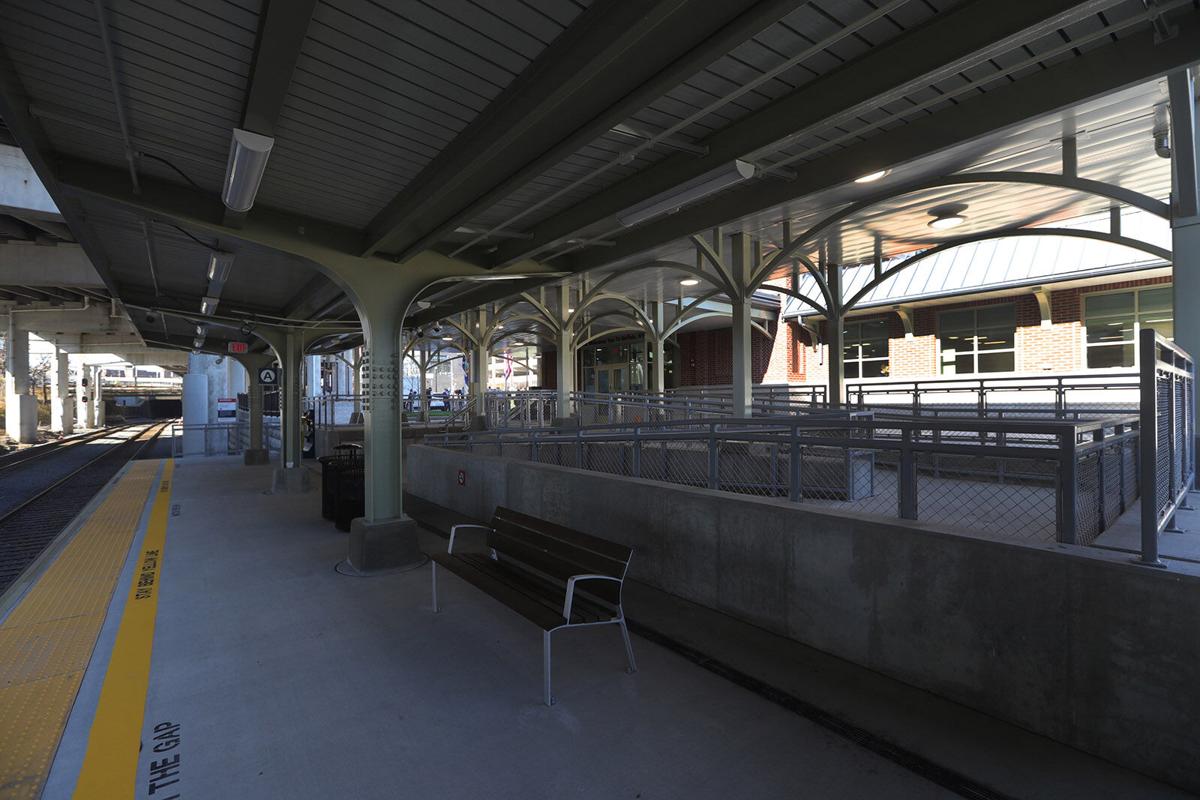 For a moment Jimmer Phillips thought he stepped off the Amtrak train in the wrong city.

"I thought I was in Cleveland," the local musician said recently.

He arrived as intended in Buffalo, but the new Buffalo Exchange Street Station caught him by surprise.

"Actually, I'm kind of impressed," Phillips said. "It looks really cool. It's got that old look."

The newly opened $28 million station is getting high marks from travelers and even those who just stop by to take a look. Its opening on Nov. 8 came three years after a contentious process that ended with the new station built on the site of the one it replaced, despite wide support for putting it at the Central Terminal on Buffalo's East Side.

The three-story brick train station's classic but contemporary look receives high marks. So, too, do the other features: the covered and raised train platform; the brightly lit, landscaped path under the Niagara Thruway; and signage guiding travelers to the nearby Metro Rail station.

Travelers also appreciate the longer hours. The station is open daily from 3:30 a.m. to 11 p.m. – a big departure from when it used to be closed evenings and on weekends.

"It's like a real train station," said Jackie Korchowsky of Amherst.

She and her husband, Daniel, made the trek to the station curious how it turned out.

"We always go to the Depew station and this is much nicer," she said. "You could actually be anywhere downstate. It definitely has that feel."

"It's gorgeous," said Megan Freeland, who drove with her two children from Corry, Pa., near Erie, to pick up her father. He was coming in on the Empire Service train that pulled into the station about 30 minutes after its scheduled 6:24 p.m. arrival from New York City.

"It looks like if you were to come to an old station in years past," she said.

The shoebox-size station that anchored the spot since 1952 was seen before its demolition last year as dreary, unwelcoming, unsafe and embarrassing for a train station in a city of Buffalo's size.

The Exchange Street station closed in 2016 after a partial ceiling collapse, setting off the push for a new train station. At the time, Buffalo had been the only major city in upstate without a new or significantly renovated train station in the previous 20 years.

The new station, built by the state Department of Transportation, was designed by Sowinski Sullivan Architects, which designed train stations in New York, New Jersey, Connecticut and Pennsylvania.

The station's ceiling, with intersecting barrel vaults, helps bathe the station in light. While still small – the waiting room seats 43 – the ADA-accessible station is nearly three times the size of the previous one. It is also at ground level and closer to the street to improve access and visibility, with the land it sits on raised 6 to 9 feet in places.

The station has bike racks outside and a vehicle waiting area in addition to parking spaces. Plans call for a Taste New York kiosk celebrating New York foods.

The raised platform caught the approving eye of Daniel Korchowsky.

"It's at the level that you can just walk on the train instead of going up the steps with your bags," Korchowsky said.

"It's a beautiful building, and they did a great job with the landscaping outside and the walkway coming in," Taylor said. "The materials fit with the rest of the city."

Taylor said she is disappointed the station isn't bigger. She also questions the location because trains can't head west without backing up and turning around due to the proximity to Lake Erie, something Amtrak won't allow.

Instead, passengers heading west have to depart from the Depew station.

"I want to go to Detroit and you can't do it from here," Taylor said.

The Lake Shore Limited once headed west from the Central Terminal, the iconic 1929 art deco station on the East Side that saw its last train in 1979, and which a nonprofit organization now seeks to revive.

After Gov. Andrew Cuomo announced in 2016 that state funding would be available to build a new train station, a panel formed by Mayor Byron Brown chose the same downtown location to be near Canalside and Metro Rail. The Central Terminal was the preferred location based on written and public comments, while another design close to the present location also had support.

The Buffalo station serves trains heading east toward New York City on the Empire Service line and northwest to Toronto on the Maple Leaf line. With reduced rail travel and Canada's border closed since March due to the coronavirus, the three trips daily in each direction have been scaled back to two.

“When this opens, people are going to see a modern, large building with a lot of amenities inside and out,” said Wahid Albert, chief engineer for the state Department of

Work to begin this winter on $28M Buffalo train station

Work on a $27.7 million train station coming to downtown Buffalo is expected to begin in early 2019 and be completed by the fall of 2020. The New York State Department of Transportation also announced Wednesday that Hohl Industrial Services and Scrufari Construction will construct the brick, three-story station on Exchange Street using the existing Amtrak station’s footprint. Buffalo

The proposed $20 million downtown train station would combine a classic and contemporary look, and would be nearly three times the size and in the same location as the current Exchange Street station. The three-story station will be at ground level after the land is built up six to nine feet in places – and moved closer to the

A new Buffalo train station should be located downtown, a site selection committee concluded Thursday. The vote was 11 in favor of downtown, 4 in favor of the Central Terminal, with one abstention. The Buffalo Train Station Selection Committee, led by Mayor Byron W. Brown, reached its decision after listening for about two hours to a presentation by an

Government and transit officials dominate the 17-member train study committee announced by Mayor Byron Brown on Tuesday. The members are expected to decide on a new location for a Buffalo train station six months after beginning. Two locations downtown, one at the Central Terminal and another in Larkinville have been proposed. “I’m grateful to Gov. Cuomo for asking me

Improving the on-time performance of trains should be a greater concern than where a new Buffalo train station is located, according to a tourism leader. Patrick J. Whalen, director of the Niagara Global Tourism Institute, said the slumping number of riders the past two years in Buffalo, and the fact that New York State had to spend $44 million  last

Coming to Exchange Street: Trains, but no buses ... for now

Despite talk of making the new train station multimodal, the NFTA signed Greyhound and New York Trailways to 10-year leases last spring to keep the buses at the NFTA facility.

A consensus has emerged among lawmakers that the time has come for a modern train station in Buffalo. Less clear is where it should be and who will take the lead locally in getting it

Buffalo left behind as other cities get new train stations

The Brown administration and Erie Canal Harbor Development Corp. want a new underground station at Canalside. A station there, officials say, would present a more attractive and safe environment for riders and expand the station’s

Visitors are impressed with the new Buffalo Exchange Street Station. 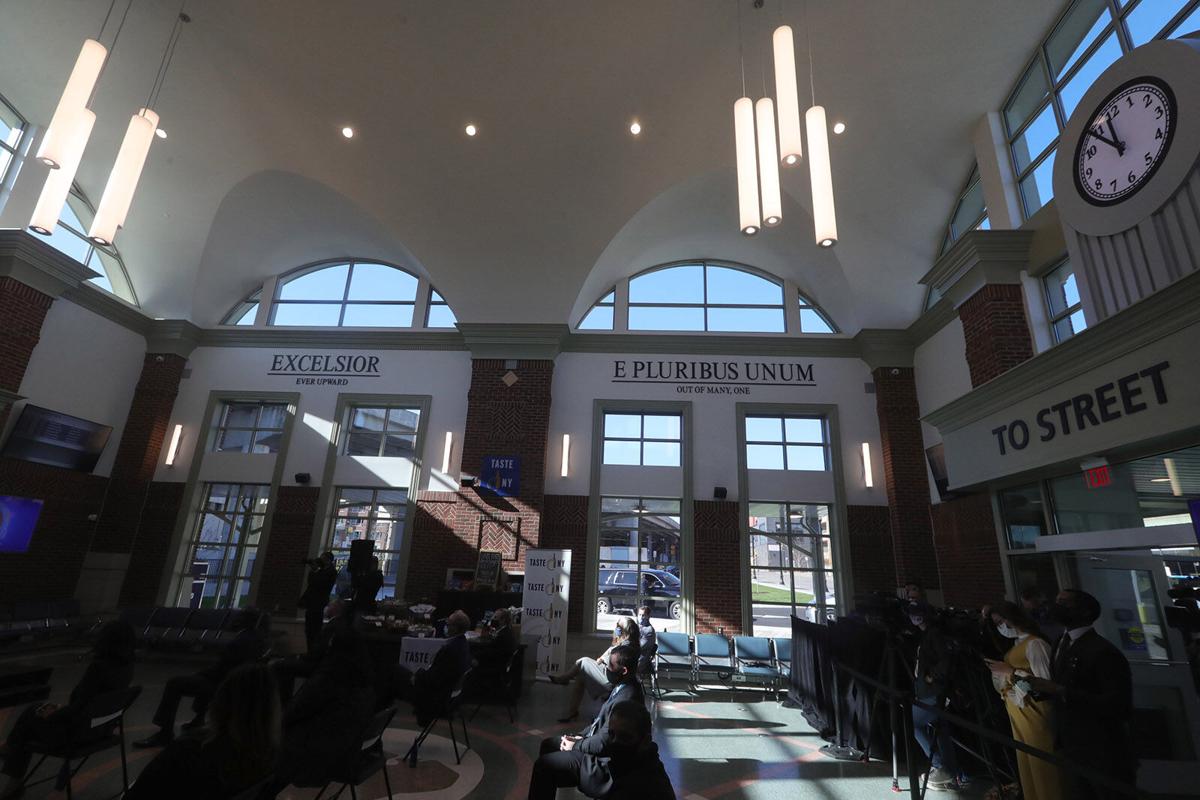 People gather in the lobby at the opening of the Buffalo Exchange Street Station. 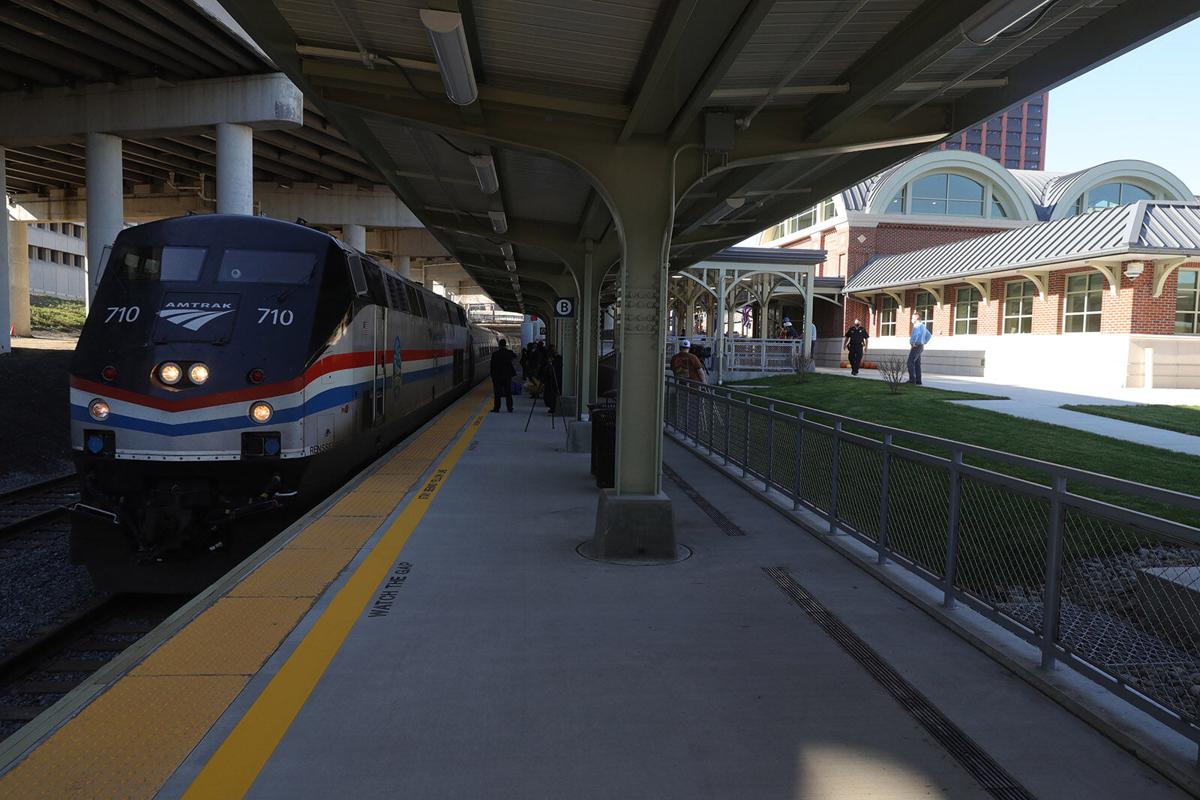 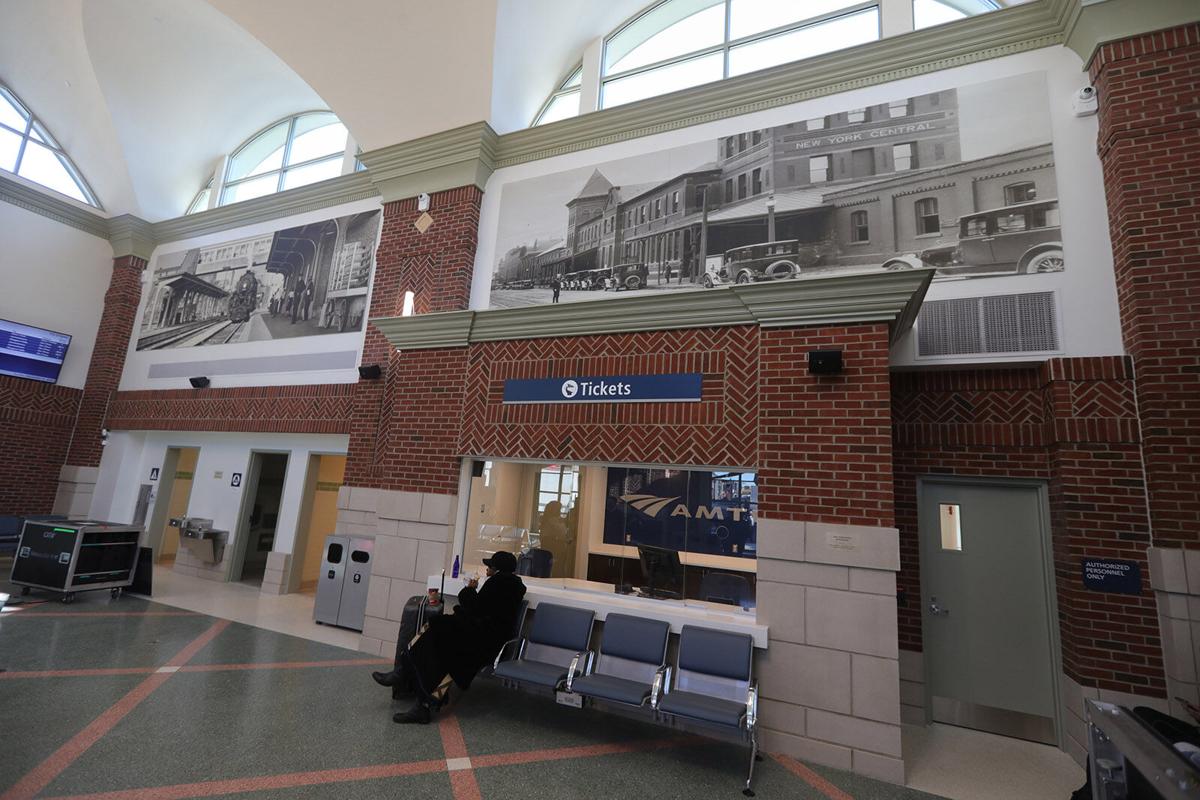