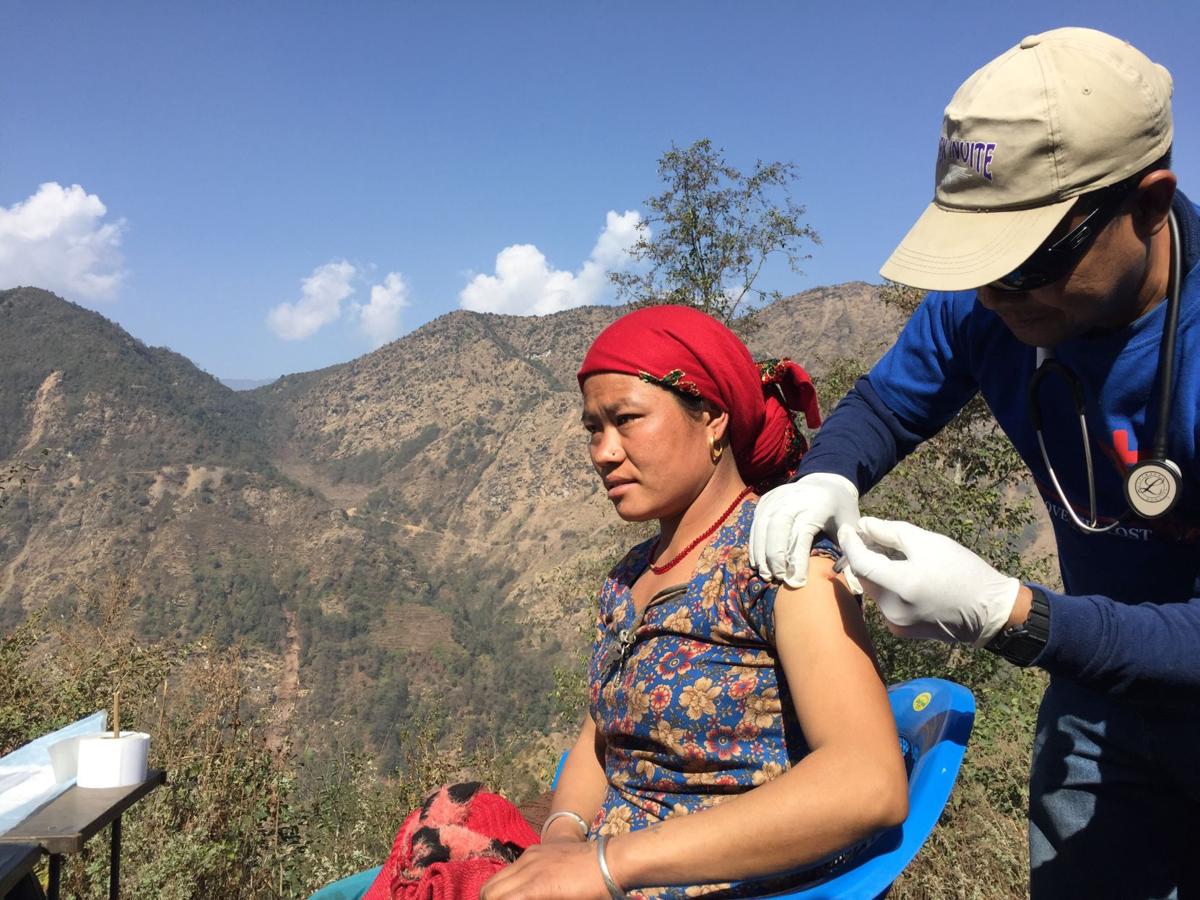 A member of Jericho Road Community Health Center's team in Nepal treats a patient in the remote village of Hagam in February 2017. (Jericho Road photo) 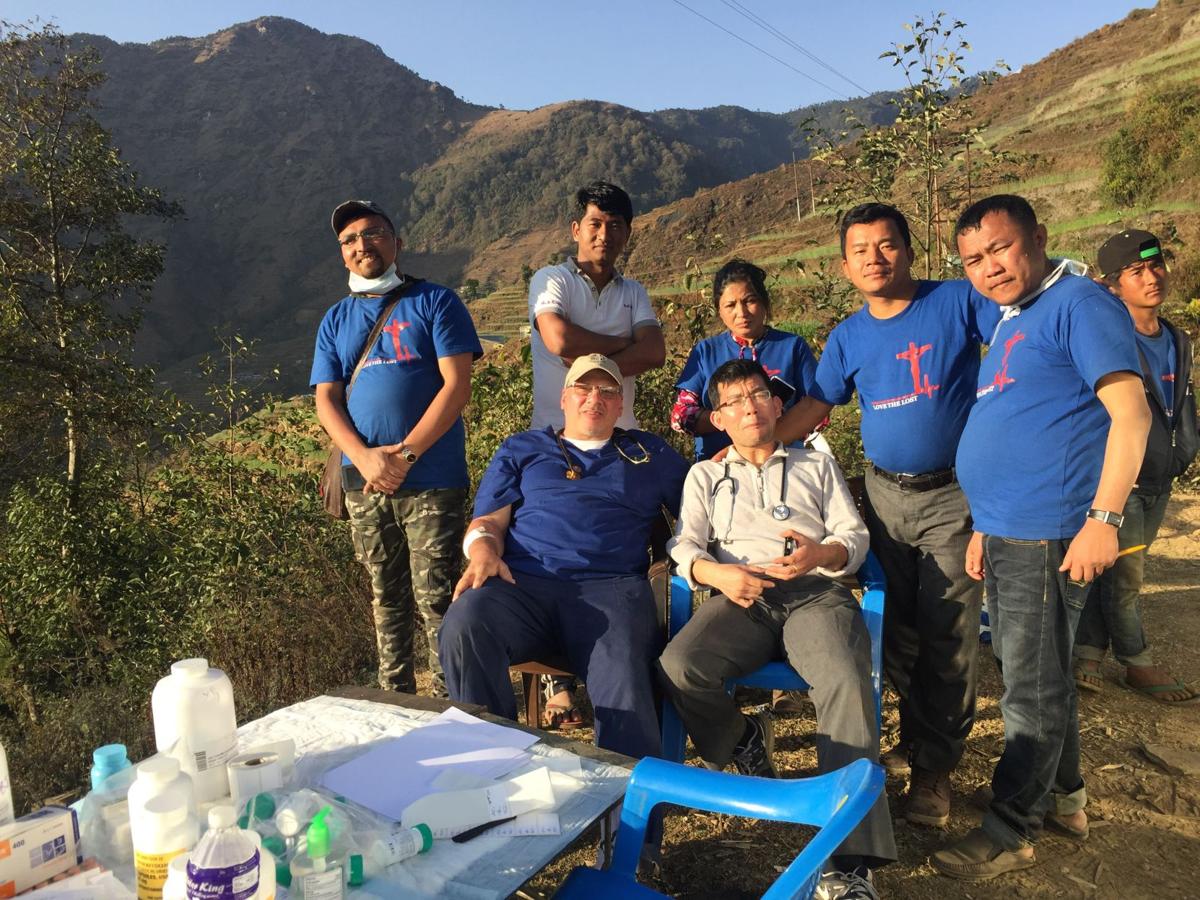 Part of the Jericho Road team in Nepal included (seated) Dr. Paul Violanti, left, and Norman Maran. In the rear are Arjun (white shirt) and, next to him, Maya Bhattarai. (Jericho Road photo) 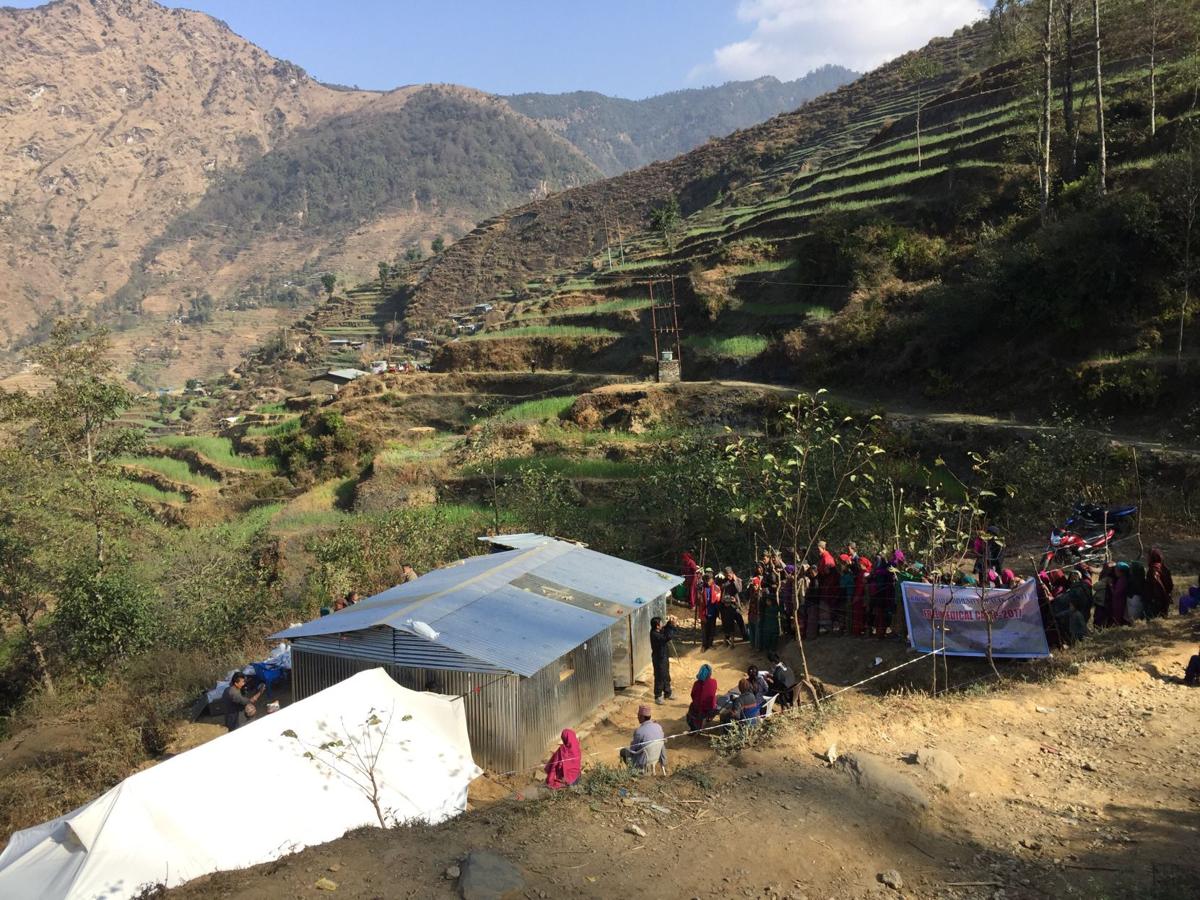 Hagam is a remote village in Nepal, high in the Himalayas and close to China’s Tibetan border. It can only be reached by motor vehicles via a treacherous, steep, one-lane dirt road. Locals are largely shut off from the advancements of the modern world, including health care. When a medical mission from the other side of the globe arrived to offer help last year, villagers encountered the first Caucasian they had ever seen.

That Caucasian was a doctor from Buffalo.

Dr. Paul Violanti, the director of global health programs at Jericho Road Community Health Center, was joined by fellow members of the Buffalo clinic as it made Nepal its latest outreach program.

“We’re building bridges between Buffalo and the Himalayas,” said Norman Maran, a Jericho Road medical provider trained as a doctor in his native Burma.

Jericho Road was founded in 1997 with a handful of doctors as a small clinic serving refugees and other low-income people on the West Side. Since then, it has expanded locally – and globally. It now has more than 300 employees in three Buffalo offices, and the Nepal program joins established clinics in the African countries of Sierra Leone and the Democratic Republic of Congo.

Jericho Road followed up its initial February 2017 visit to Nepal with another trip in March, and now there is an infrastructure in place to help villagers in Hagam and the nearby village of Habra. Jericho Road hired two workers – a medical provider and a spiritual care coordinator, and purchased medication and motorcycles to enable them to provide regular care.

“It’s just the start of something that is probably going to be a lot bigger,” said Violanti. “One of the stories here is how isolated these people are, up in the Himalayas – they are unreached people. It’s no different from being on one of those tropical islands.”

During their eight-day trip this March, the Jericho Road team treated more than 500 people between the two villages, which have a total population of about 3,000. The village of Hapra is even more remote than Hagam – it is only accessible by a 30-mile hike up and down a small ravine, which the Jericho Road contingent had to traverse while carrying all of their gear.

“I know the pain and needs of Nepal,” said Pastor Purna Tamang, a refugee of neighboring Bhutan who lived in Nepal for 20 years and has been at Jericho Road for five years. “There is no health care system, people are dying, children are dying without any care.”

What are now two clinics in Sierra Leone were first inspired by Phebian Abdulai, a refugee from that country who became a nurse at Jericho Road. A large influx of Congolese refugees to the West Side helped prompt the program in the Congo.

“It’s a natural progression of something that was already in our blood and already doing,” said Violanti.

The Nepal effort was prompted by Tamang, who advocated for a mission for several years. In the aftermath of the devastating 2015 earthquake that killed nearly 9,000 people and injured 22,000, he traveled by himself to offer help.

“Purna asked if we could help the Nepali people when we were building the Congo clinic … then the earthquake came in 2015 and he said, ‘I’m going, I can’t wait for you,’" Violanti recalled. “That’s what sort of pushed us over the edge – if he’s willing to do this on his own, we’re going to help him.”

“I was excited to make a reality, having these provisions and health care up in the mountain,” said Tamang.

Voilanti, Tamang and Maran were joined on the March trip by Maya and Arjun Bhattarai, who are natives of Nepal. She is a nurse practitioner. He is part of the care coordination team. The Bhattarais, after meeting with Violanti at a missionary conference, moved from Columbus, Ohio, to Buffalo to specifically join Jericho Road and help the mission to Nepal.

“That’s the way Jericho Road’s been,” said Violanti. “It’s always these little connections that just make so much sense. You know you’re on the right track, you know that this isn’t just something you’re trying to do on your own.”

The trip from Buffalo lasted 26 hours, then the team experienced logistical challenges routinely faced by the Nepalese people. Hagam is at an elevation of 8,000 feet, about 4,000 feet higher than the closest village that has a hospital and modern conveniences. The distance on land is but 4 miles, but a trip by SUV up the harrowing mountain road – on a cliff with no guardrails – takes about 90 minutes. When the area is hit by monsoon rains or landslides, the road becomes impassable by car.

The team treated people in a variety of ways, but one patient that stood out to Violanti was an 18-year-old boy who kept having seizures as he was walking up and down the mountain, leading to falls that resulted in a mangled leg.

“It was heartbreaking,” said Violanti. “His leg was really banged up and he needed a lot of care.”

The Jericho Road team treated him and the local worker, Pastor Ashish, was able to take him to Kathmandu for treatment.

“He was there six months and healed comfortably,” said Tamang, “and he went back to the mountain.”

“We go there, this is what we deal with,” said Violanti. “It’s like an emotional roller coaster because they don’t have anything, they don’t know what they don’t have, and they’ve lived like this for thousands of years.

“In these same villages, Christian missionaries were martyred … now a Buddhist lama is giving us land to build a clinic on, and they’re building the roads for us to come back.”

A local lama, a Buddhist priest, donated the land for the clinic to Jericho Road, and the equivalent of a county executive, Nepal’s chairman of Ward 6, has pledged to fix the roads to ensure better access for Jericho Road representatives.

"If I go with a Bible, they may murder me … but because I went with a blanket … " Tamang said, leaving the sentence unfinished. “We told them we are a medical missionary coming all the way from Buffalo to Nepal. They were welcoming."

Violanti says that Jericho Road treats almost the same number of people through its international programs as it does in the Buffalo area.

Jericho Road’s first office was on Barton Street on the West Side; it added a small medical center at 1609 Genesee St. in 2004 and opened a five-story, 110,000-square-foot building at 1021 Broadway, next to the Broadway Market.

A member of Jericho Road Community Health Center's team in Nepal treats a patient in the remote village of Hagam in February 2017. (Jericho Road photo)

Part of the Jericho Road team in Nepal included (seated) Dr. Paul Violanti, left, and Norman Maran. In the rear are Arjun (white shirt) and, next to him, Maya Bhattarai. (Jericho Road photo)