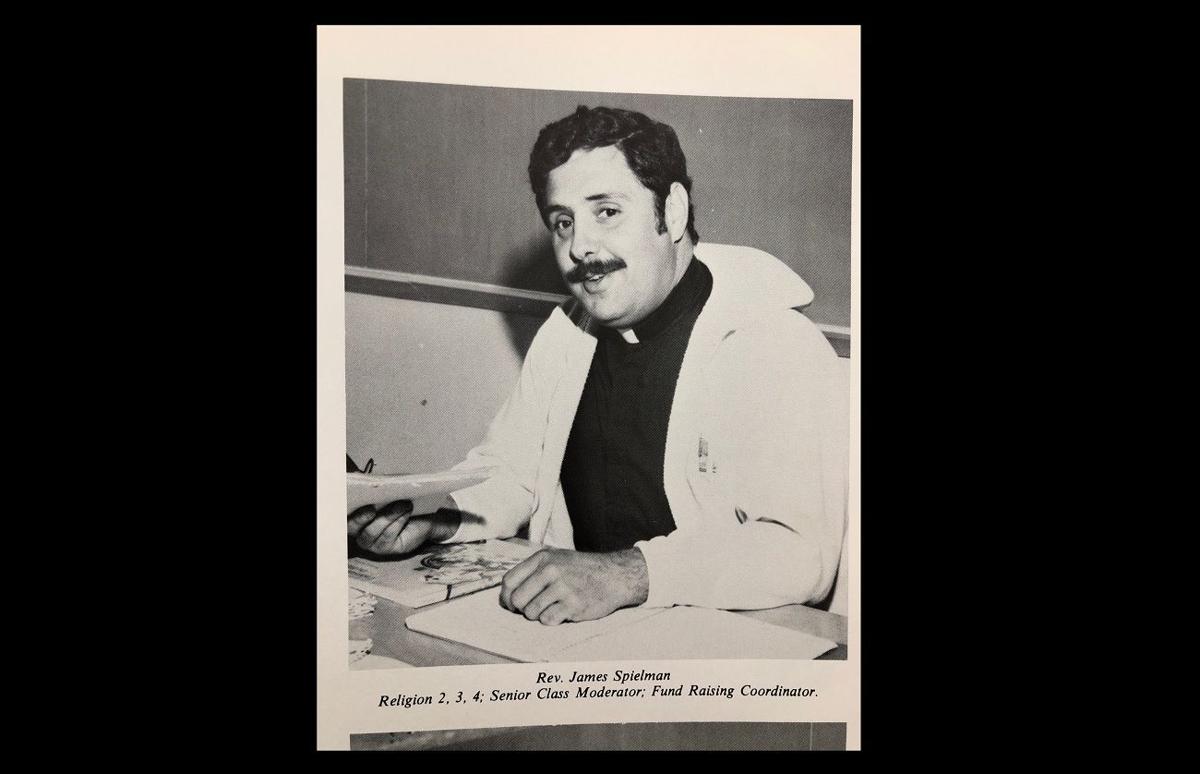 A photo of the Rev. James A. Spielman from the 1981 yearbook of Archbishop Walsh High School in Olean, where Spielman taught religion classes. 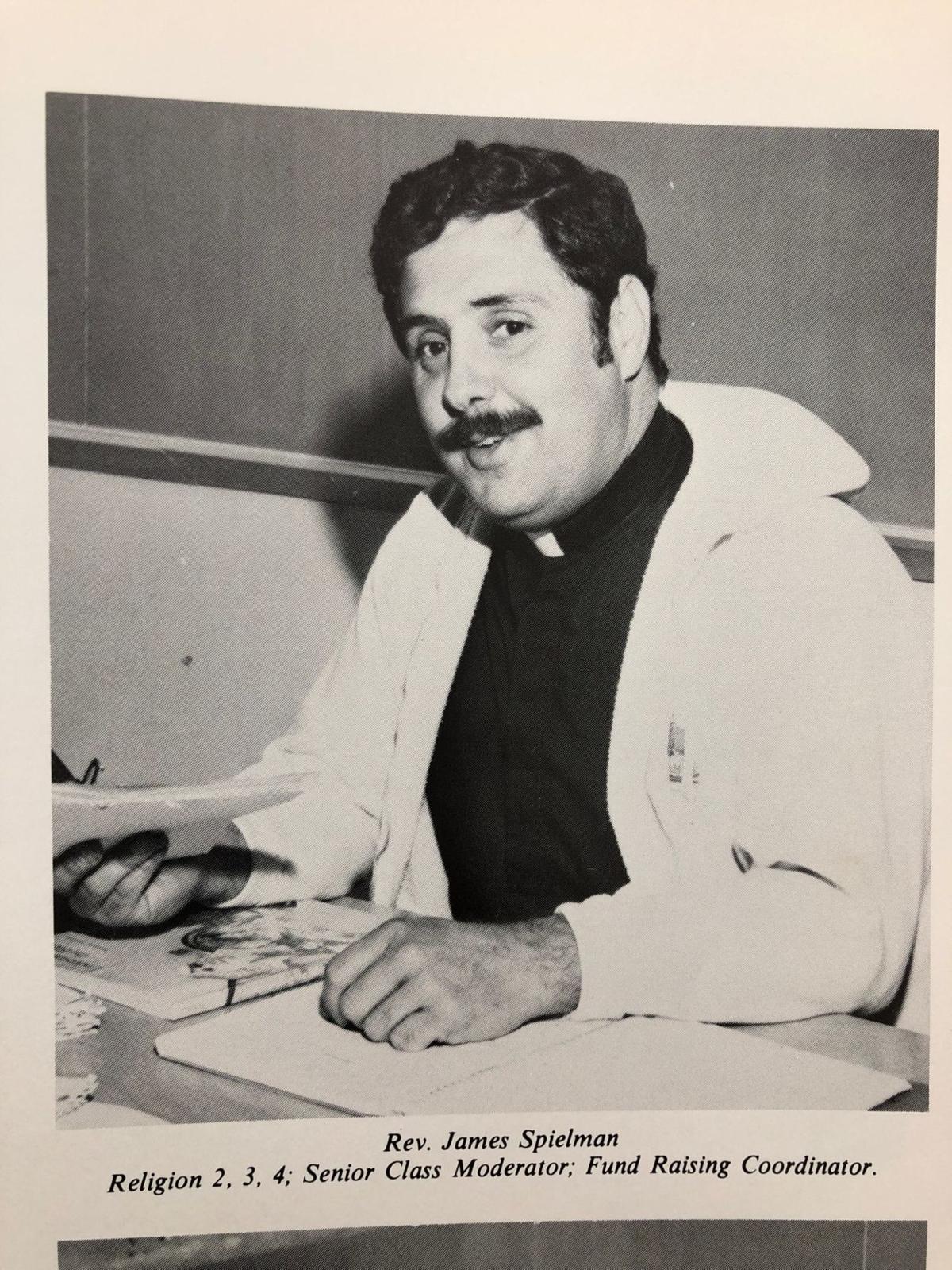 A photo of the Rev. James A. Spielman from the 1981 yearbook of Archbishop Walsh High School in Olean, where Spielman taught religion classes. Spielman was accused of sexually abusing a teenaged boy in a lawsuit that the Catholic Diocese of Buffalo paid $1.5 million to quietly settle in 2016,

The Catholic Diocese of Buffalo quietly paid $1.5 million in 2016 to a man who alleged a priest sexually abused him when he was a teenager more than three decades ago.

It was the diocese's second financial settlement of a lawsuit alleging abuse by James A. Spielman, a former diocesan priest who served in at least six Western New York parishes and taught religion at Archbishop Walsh High School in Olean.

The settlement is the largest that has come to light so far in the Buffalo Diocese for a clergy sex abuse case.

The News found the case in a recent search of federal court records from Hawaii, where the lawsuit was filed.

The massive settlement added to questions about whether diocesan officials have disclosed the full extent of clergy sex abuse in Western New York.

The alleged victim, who is 52, lives in Texas. In 2014, he sued Spielman and the Buffalo Diocese, along with the high school, the Diocese of Honolulu and the Southdown Institute, a facility near Toronto where offending priests were sent for psychological treatment and rehabilitation. He said he was 14 to 17 years-old and attending Archbishop Walsh High School, when Spielman repeatedly molested him at the school and other locations in both the Buffalo and Honolulu dioceses from 1979 through 1982.

The alleged victim accused the diocese of knowing that Spielman had molested children in the past, covering up the abuse and transferring Spielman from parish to parish despite his history of abuse. The diocese denied the claims in court papers.

The News is withholding the name of the man who sued. He could not be reached to comment, and The News does not disclose the names of sexual abuse victims without their consent.

The Buffalo Diocese and Archbishop Walsh High School, which had been operated by the diocese at the time of the alleged abuse and is now an independent school, agreed to settle with the victim for $1.5 million, according to court documents. The Diocese of Honolulu paid $25,000.

Earlier this month, diocesan officials said the diocese had paid out about $1.2 million in compensation to sex abuse victims over the past two decades. Diocesan spokesman George Richert said on Friday that the $1.2 million figure reflects only actual diocesan funds used to compensate victims. It does not include payments made to victims by the diocese's insurance plans, he said.

Richert declined to comment further on the Hawaii lawsuit, other than to say the settlement did include some funds paid directly by the diocese.

In the court records, Southdown Institute officials provided evidence that Spielman was treated there from Dec. 26, 1989, to May 25, 1990, and again in 1993 – years after the victim who brought the lawsuit said the abuse occurred.

Buffalo Diocese officials told The News in 2002 that the diocese had not in 20 years transferred any priests who had a credible allegation of sexually abusing a child to serve in another parish.

The 2016 settlement was in addition to a $150,000 settlement in 1994 of another molestation claim against Spielman. In that claim, a former altar boy accused the priest of repeatedly molesting him in an Allegany County cabin and in various parish rectories in the 1970s.

Spielman resigned from the priesthood in 1993, the same year the former altar boy's complaint was brought. Spielman moved to Alaska. He now appears to be living in Hawaii or in Allegany County, where public records show he stills owns a cabin.

Why suit was in Hawaii

Michele M. Betti, a lawyer for the victim who specializes in sex abuse cases, filed the complaint in U.S District Court for the District of Hawaii, in an apparent effort to make sure the case would not get dismissed because it was filed long after the alleged abuse happened.

In New York and other states, sex abuse cases like this one generally have been time barred because the accusers do not file a complaint to the court within a time period specified by law, known as the statute of limitations.

But some states in recent years have enacted legislation that allowed victims of sex abuse as children to come forward with complaints that previously had been time-barred. Hawaii was one of them. In 2012, Hawaii Gov. Neil Abercrombie signed a state law that opened a one-time, two-year window for victims to file lawsuits without being time-barred by the statute of limitations.

That's when Betti and another attorney, Jared A. Washkowitz, filed the case in Hawaii against the Diocese of Buffalo and the Diocese of Honolulu, where Spielman also had served as a priest in parishes on the islands of Molokai, Maui and Oaho, according to court papers.

The Diocese of Hawaii was known to have had a shortage of priests and often welcomed priests from other diocese and religious orders to serve in parishes and at schools, said J. Michael Reck, an attorney who handles clergy sex abuse cases across the country, including Hawaii. Reck did not work on the Spielman lawsuit, but he was aware of it.

The Buffalo Diocese could be sued in Hawaii because Spielman was there functioning in his capacity as a Buffalo priest, said Reck.

"Even though he's out in Hawaii, he's still working under the authority of his bishop in the Diocese of Buffalo," he said.

The alleged abuse victim reached a settlement with the dioceses on June 15, 2016. The terms of the deal were not disclosed at the time. The dollar amount became public in the victim's U.S. Bankruptcy Court filing in 2017.

Spielman, 73, was ordained to the priesthood in 1970 and assigned as a summer chaplain at Camp Turner, an overnight diocesan youth camp in Allegany State Park, near Salamanca. In the 1970s, he served at parishes in Springville, Jamestown and Salamanca, and he was assigned to teach at Archbishop Walsh in 1978.

The man who sued the diocese was a student at Archbishop Walsh from 1979 to 1983. He said in court papers people in the diocese knew that Spielman "had an unusual interest in minor boys" and "had frequent unsupervised contact with minor boys … for extended periods of time."

The court documents specified that another religion teacher, a Franciscan nun, walked in on Spielman hugging and kissing the student in a classroom at Archbishop Walsh. Employees of the Diocese of Honolulu also saw Spielman alone with the student when the priest took a group of boys on a trip to Hawaii in 1982, according to court papers.

The student first contacted an attorney as an adult after reading a 2002 account in The News about the former altar boy who settled his Spielman abuse complaint with the Buffalo Diocese for $150,000. He then began seeing a therapist and rape counselor in 2007. He cited in court papers "physical manifestations of emotional distress, embarrassment, loss of self-esteem, disgrace, humiliation and loss of enjoyment of life" among other psychological and physiological injuries suffered as a result of the abuse.

Spielman is among 23 priests who served in the Buffalo Diocese who have been publicly accused of sexual misconduct.

An admission in February by the Rev. Norbert F. Orsolits that he molested "probably dozens" of teenage boys before he was quietly removed from public ministry in 2004 stunned the region and raised new questions about whether diocesan officials had provided a transparent accounting of the extent of abuse in the diocese.

Orsolits' admission also prompted new sex abuse accusations against him and other priests. Soon after the admission, Malone announced a new diocesan compensation fund that will give some sex abuse victims a chance at a monetary settlement. Malone is also under renewed pressure from victims and their advocates from across the country to release the names of priests who were credibly accused of sexually abusing children.

Michael Toner, a parishioner of the University at Buffalo Newman Center in Amherst, said he has been involved in helping raise money at the parish level for both Catholic Charities and "Upon This Rock" and hasn't heard of people hesitant to donate because of the sex abuse scandal.

But Toner said he hoped the diocese would provide more information about which priests were credibly accused of abuse and how allegations of abuse were handled.

"My thinking is there's historically been so much coverup and so much secrecy that it's maybe time to take a chance on transparency to bring healing and to let people who thought they were alone know that, 'No, you are not,' " he said.

A photo of the Rev. James A. Spielman from the 1981 yearbook of Archbishop Walsh High School in Olean, where Spielman taught religion classes.

A photo of the Rev. James A. Spielman from the 1981 yearbook of Archbishop Walsh High School in Olean, where Spielman taught religion classes. Spielman was accused of sexually abusing a teenaged boy in a lawsuit that the Catholic Diocese of Buffalo paid $1.5 million to quietly settle in 2016,