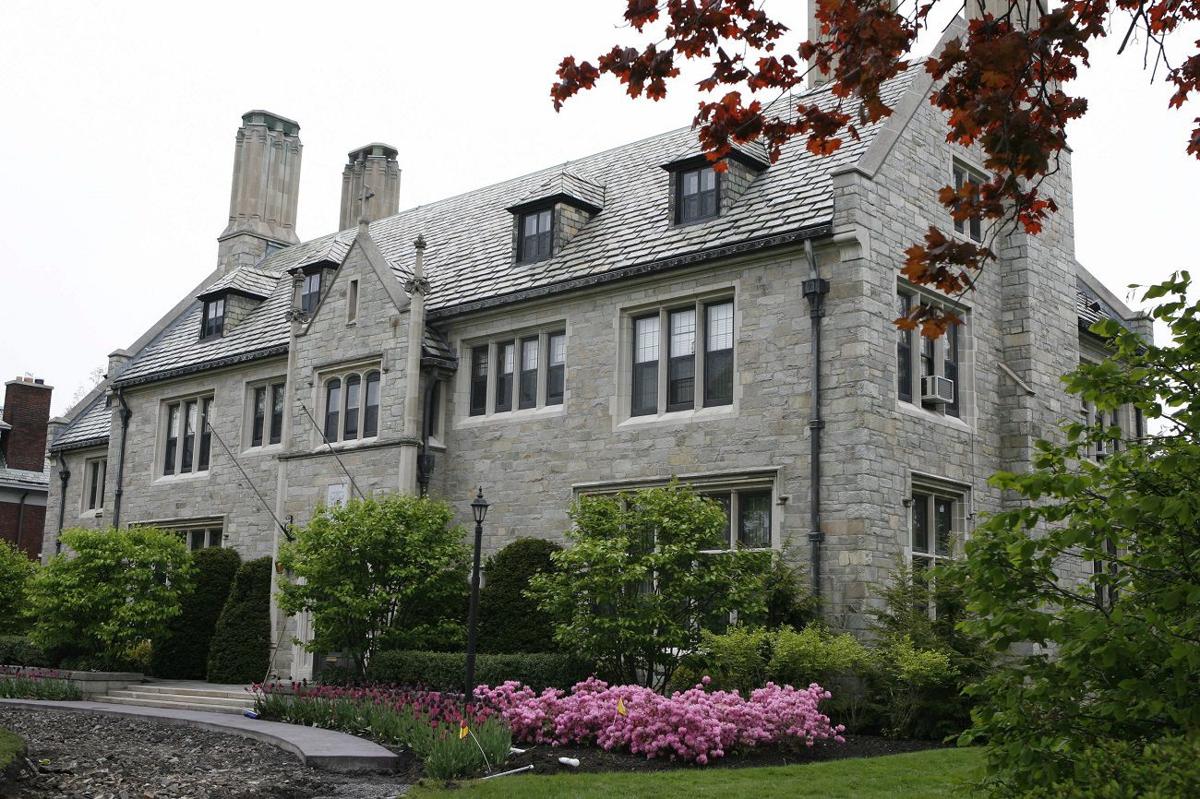 The Diocese of Buffalo's property on Oakland Place in Buffalo, which serves as the bishop's residence, pictured in May 2007. (Sharon Cantillon/News file photo) 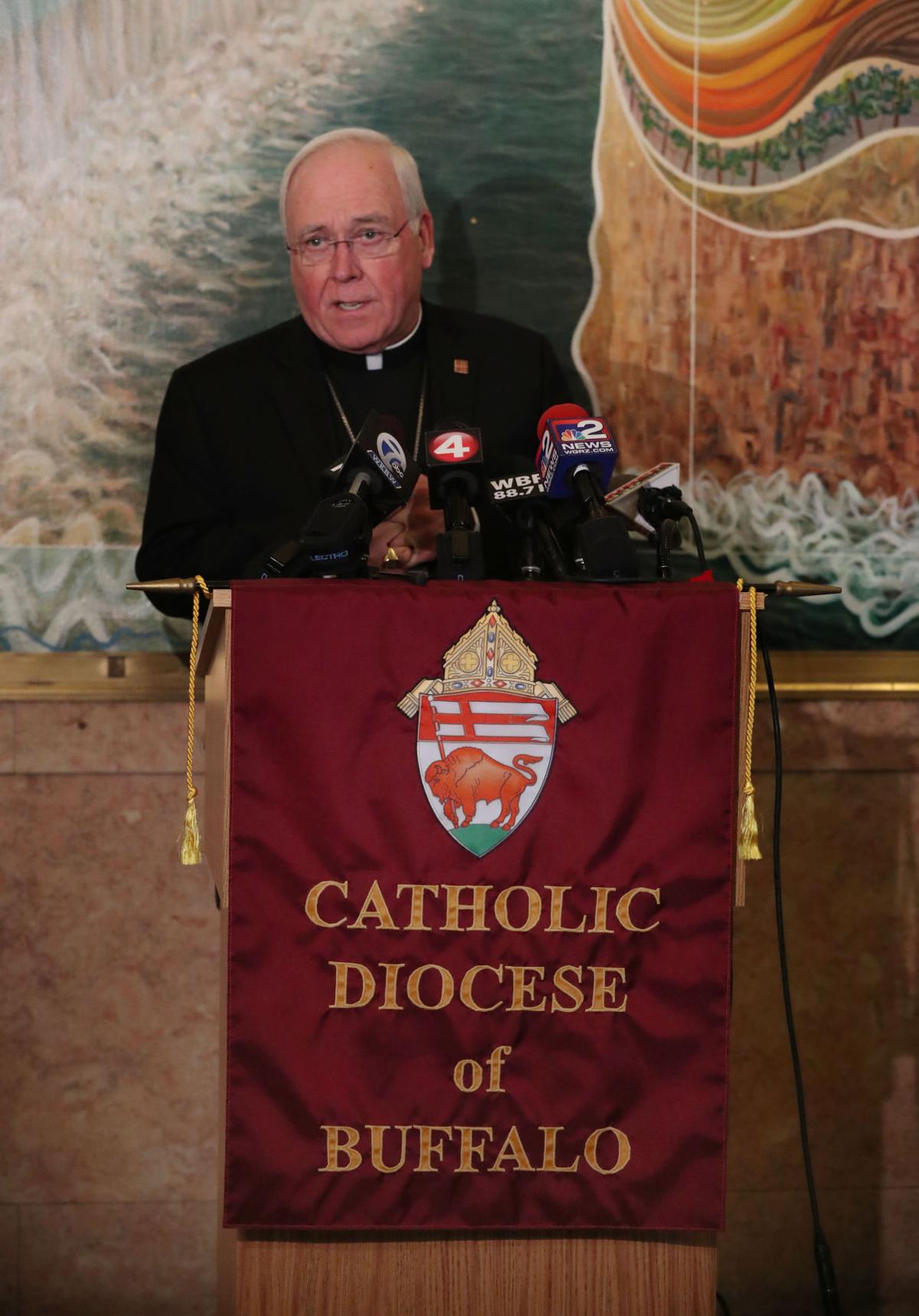 Bishop Richard J. Malone mentioned in March that no Catholic Diocese of Buffalo properties would be off-limits from the possibility of being sold to help compensate childhood victims of clergy sexual abuse.

The sell-off started on Tuesday, with Malone's sudden announcement that he will put on the market his own residence, a palatial mansion on one of Buffalo's most exclusive streets that's been home to Buffalo bishops since 1952.

Malone said the decision was made "in the face of this crisis of reaching out to victims and the need really to have strong resources" to compensate clergy abuse victims through a program he announced in March.

"We do have some good resources for that already, but we know we'll need more so we decided to put the residence on the market," he said.

The residence at 77 Oakland Place is assessed at $1.3 million with a full market value estimate of $1.91 million. The Tudor manor house, designed by architect E.B. Green, has nine bedrooms and six bathrooms in 11,050 square feet of space. It features four massive stone chimneys, a slate roof and a separate apartment above the five-car garage.

One real estate agent predicted the home would fetch over $2 million. "It's going to be a huge number," said Susan Lenahan of M.J. Peterson Corp.

Malone will move into a former convent at St. Stanislaus Parish on Buffalo's East Side after the sale.

The diocese also plans to sell Sheehan Residence, a home for retired priests at 336 Linwood Ave., to raise money for a fund to pay medical benefits for retired priests. That property is assessed at $490,000, but is fully valued at $720,588.

And Malone acknowledged that the Catholic Center, the diocesan headquarters at 795 Main St., could be next, saying "we are open, at some point, to the sale" of the former Courier-Express office building at the corner of Main and Goodell streets.

"For two or three years we've been looking for a smaller space," said Malone.

When the diocese purchased the building in the early 1980s, it had 220 employees working in the Catholic Center. Today, the number is around 140 people.

Some Catholics have urged bishops for years to sell the bishop's mansion, saying it was too much of a luxury to maintain at a time when parishes, schools and some Catholic missions had been forced to close.

Diocesan officials in the past maintained that having the Oakland Place home saved the diocese the expense of renting hotel, restaurant or conference room space for many events and visits. The diocese bought the property 65 years ago for $50,000. At one time, it was the most valuable home in the entire city.

Malone lives in the house with his secretary, the Rev. Ryszard S. Biernat. Monsignor Paul A. Litwin, who was diocesan chancellor for several years, recently moved out after he was named as pastor of Christ the King parish in Snyder.

Malone said in a 2013 interview with The News that the residence "works for us, and really it's cost-effective. If we didn't have that, I'd have to live some other place. We'd have to buy some other place. It would have to be large enough, because I really do believe in the principle of bringing people into the bishop's home. It's why it's a big deal when people have an audience with the pope inside the apostolic palace, not just out in the square."

A retired priest’s Feb. 28 admission that he had molested “probably dozens” of boys in the 1970s and 1980s reignited concerns that the abuse scandal in Western New York was more widespread than diocesan leaders had previously acknowledged. The Rev. Norbert F. Orsolits admitted the abuse to The News after Michael F. Whalen Jr., 52, of South Buffalo, accused the priest of molesting him on a ski trip in the early 1980s. Other men followed Whalen with similar allegations against Orsolits and other Buffalo priests.

Under intense pressure, Malone in March released the names of 42 diocesan priests credibly accused of sexual misconduct with minors, a list that included men who had been quietly removed from ministry years ago with no public explanation.

The Buffalo Diocese also joined several other dioceses across New York in offering a voluntary program to compensate sex abuse victims through a process in which two retired judges will review claims, independent of the diocese and determine settlement award amounts. Victims have until June 1 to file a claim.

At least 58 priests who worked in the Buffalo area have been publicly linked to sex allegations in recent decades, according to a list compiled by The Buffalo News.

Priest pushed for sale of mansion

The Rev. Roy Herberger was particularly pleased by the news that the bishop's mansion was being put up for sale. The retired priest has been pressuring diocesan leaders to sell the mansion for over 30 years, harping on the conflicting appearance of the bishop living in a grand mansion while religious leaders preach about sacrifice and helping the poor.

"It's about time. I'm very happy that the bishop and the diocese has made the decision," said Herberger, who recalls being in the mansion on one occasion.

"Unless the bishop and the diocese shows a sign that they're ready to make a sacrifice, how can they ask others? It's the symbolism of what it meant that we're willing to do something ourselves to show people that we'll take the first step and hopefully you'll follow our example."

Herberger said he first urged such a sale during a "big symposium" of regional bishops and priests held at the Adam's Mark Hotel several decades ago, when leaders were calling for a new focus on the poor while sitting in "a beautiful hotel with fine china." He's repeated his message many times over the years, but was either dismissed or ignored.

"Unless we can be leaders and show people, what can we expect others to do?" he said. "At least something good is finally being done in that area."

Other diocesan priests also supported the move to sell the building.

Malone met with the diocesan Council of Priests Tuesday prior to the announcement and the consultative group of clergy reached "full consensus that this was the right step to take," said the Rev. Peter J. Karalus, chairman of the Council.

"The topic of selling the bishop's residence has surfaced on and off for decades," said Karalus. "I don't think anyone was surprised by it because it's been an issue."

The bishop's Oakland Place mansion was built in 1900, but has been in the hands of the diocese since December 1952, according to county records. The stone house occupies one acre, and has two-and-a-half floors.

The Sheehan Residence for retired priests is a three-story brick building at Linwood and West Utica Street that originally was built in 1928 as the rectory for what was then St. Joseph Cathedral on Delaware Avenue. The “New Cathedral” as it was known was demolished in the 1970s and the former rectory has been used ever since as a residence for retired priests. It is a 17,376-square-foot building with 10-foot ceilings, a full basement and a detached garage. The building features 12 suite-style units.

Three other diocesan residences for retired priests will be used to accommodate the men now living at Sheehan Residence.

News of the two properties being put on the market was met with excitement by real estate brokers, whose cellphones were lighting up with calls and texts from clients almost immediately.

"It's an amazing piece of property, with a very, very large backyard," said Lenahan, of M.J. Peterson Corp., who had received two phone calls and a text by midafternoon. "The first floor is lovely. The public rooms on the first floor are gorgeous. The inside rooms are as nice as the exterior."

Kristan Andersen, a vice president and broker at Gurney Becker & Bourne, agreed. "It's a great opportunity for somebody in the city of Buffalo, and I can definitely see it being purchased as a single-family home," said Andersen, who had texts from two clients.

"It's really a special residence, in one of the best streets in Buffalo," she added. "It's a beautiful spot, and an exciting opportunity for the right buyer. I think there will be significant interest and for this type of property that has not been available in countless years."

Malone said he did not know if the sale of the mansion will be enough to pay all claims. "We know, or at least we hope we can achieve significant resources from that that will help the reconciliation program bring some healing to victims," he said.

As diocese prepares to pay victims, its primary source of money: parishioners

Malone has said in the past that the diocese also will rely on insurance and investment reserves to pay for claims, while trying to assure parishioners that gifts to Catholic Charities and the Upon This Rock capital campaign will not be used for the reconciliation program.

The two properties are just part of a much larger real estate portfolio that the Catholic Diocese owns in Western New York, including individual churches, schools, cemeteries, offices, other religious facilities, parking lots and even vacant land. Many of those are owned directly by separate parishes, even though they are ultimately controlled by diocesan officials.

The Catholic Diocese directly owns at least 46 properties with at least 90 acres of land in Erie, Niagara, Chautauqua, Cattaraugus, Genesee and Allegany counties, according to county records.

While the church-owned land is not taxed, the properties are assessed at $30.81 million.

The Diocese of Buffalo's property on Oakland Place in Buffalo, which serves as the bishop's residence, pictured in May 2007. (Sharon Cantillon/News file photo)