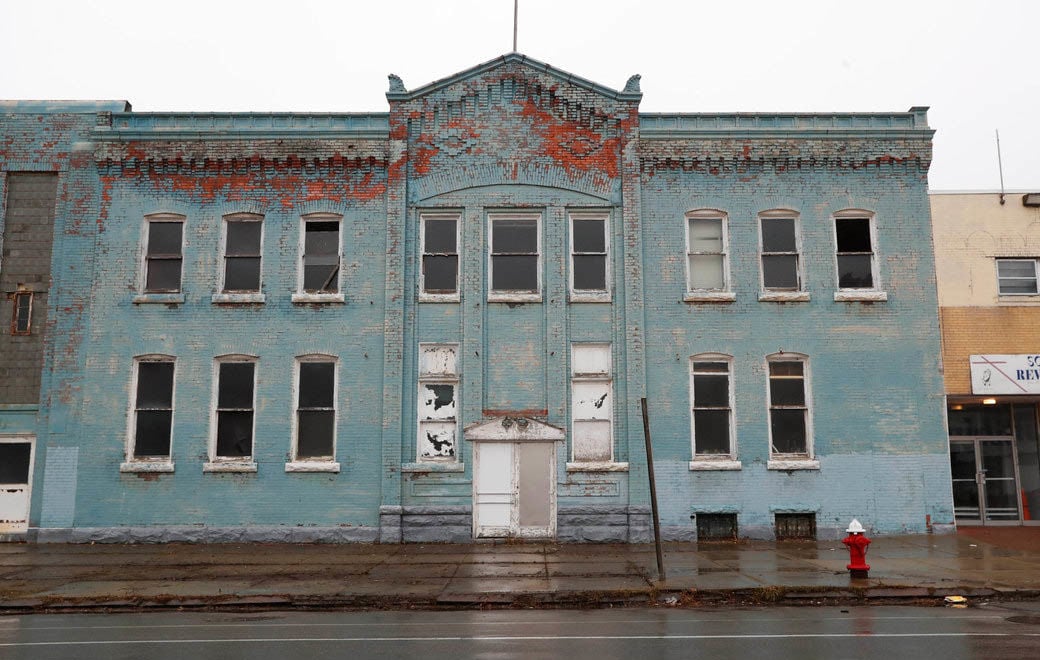 Locations stand to benefit from the state's East Side $65 million initiative. The former Schreiber Brewery at 662 Fillmore Ave. is being restored for use by Buffalo Brewing Company. (Sharon Cantillon/Buffalo News) 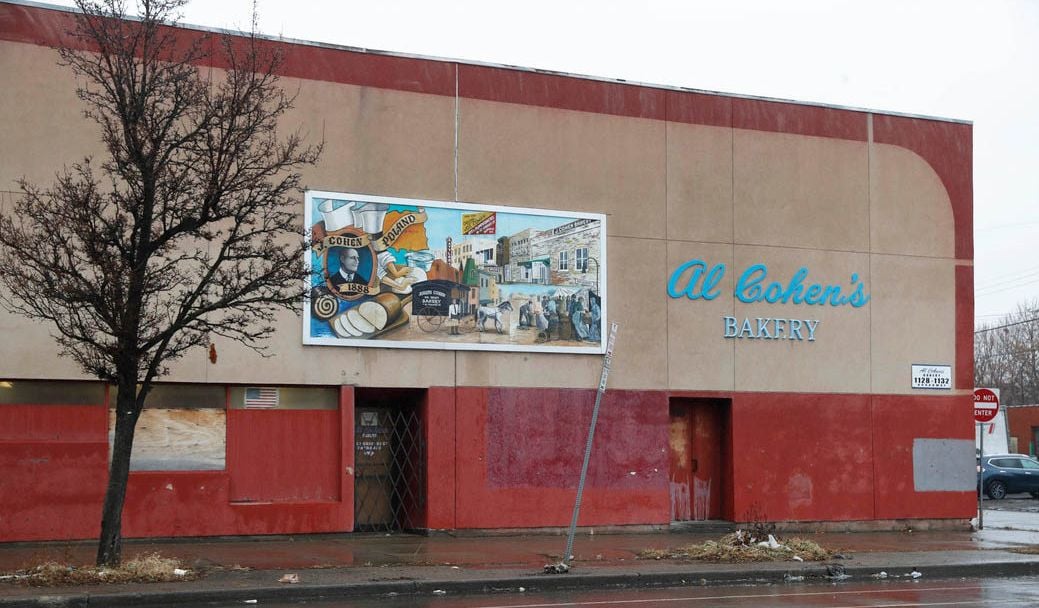 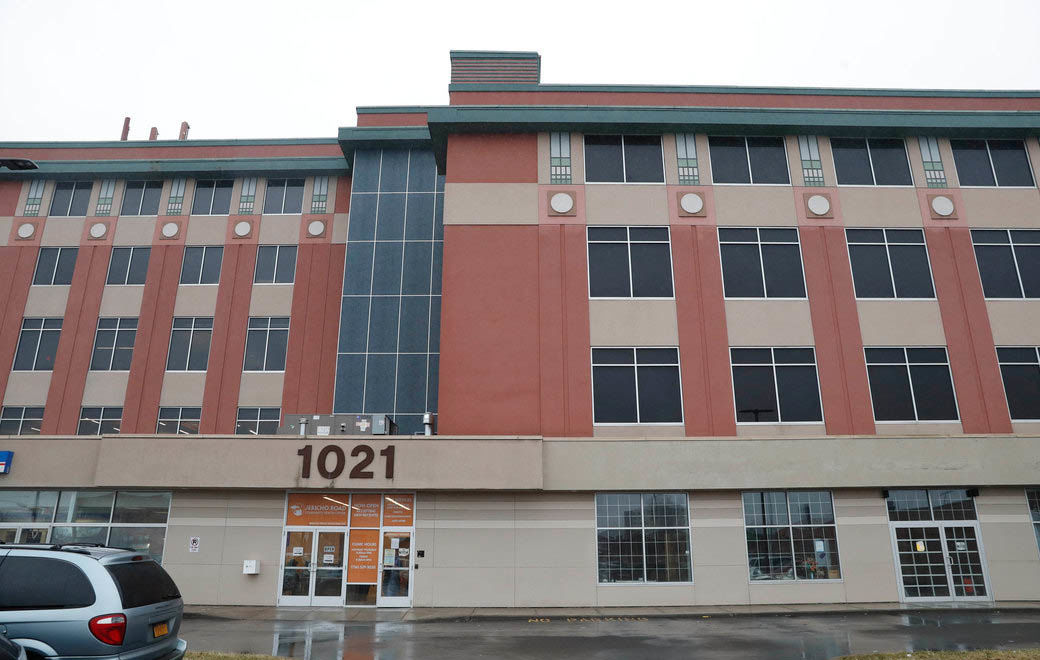 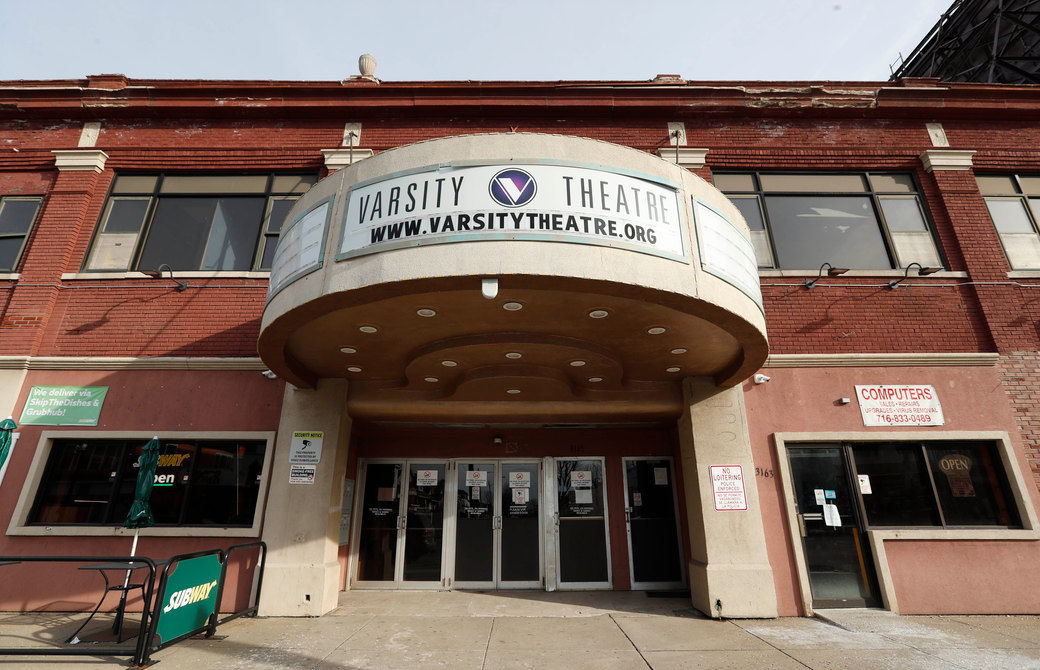 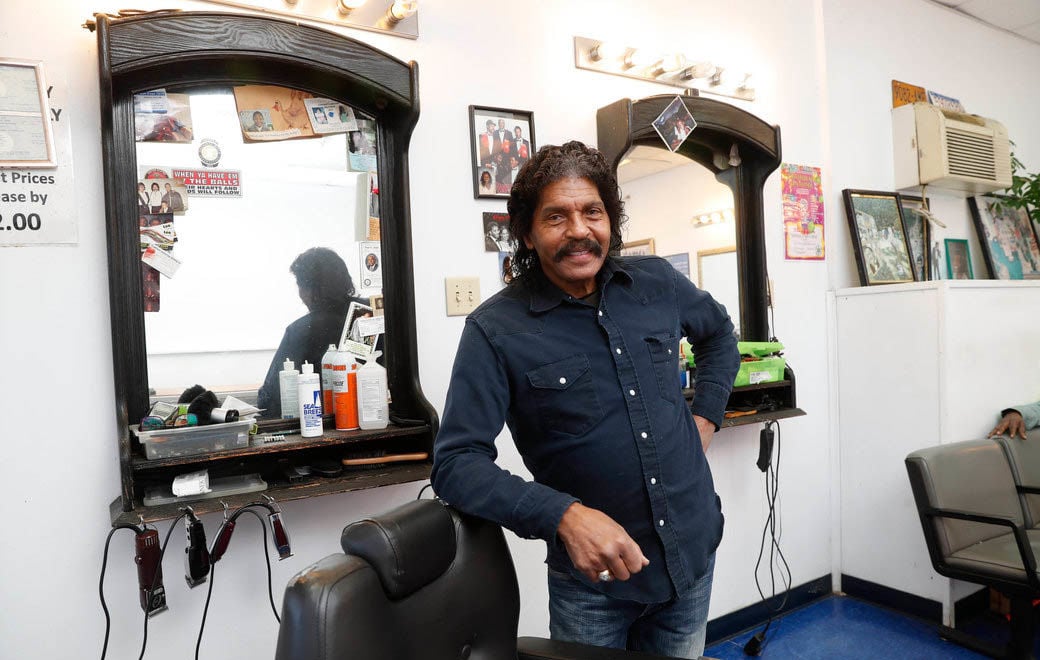 Leroy Love, owner of Mr. Love & Sons Barber Shop at 1388 Jefferson Ave. in Buffalo is planning to use the state program to remodel his business., (Sharon Cantillon/Buffalo News) 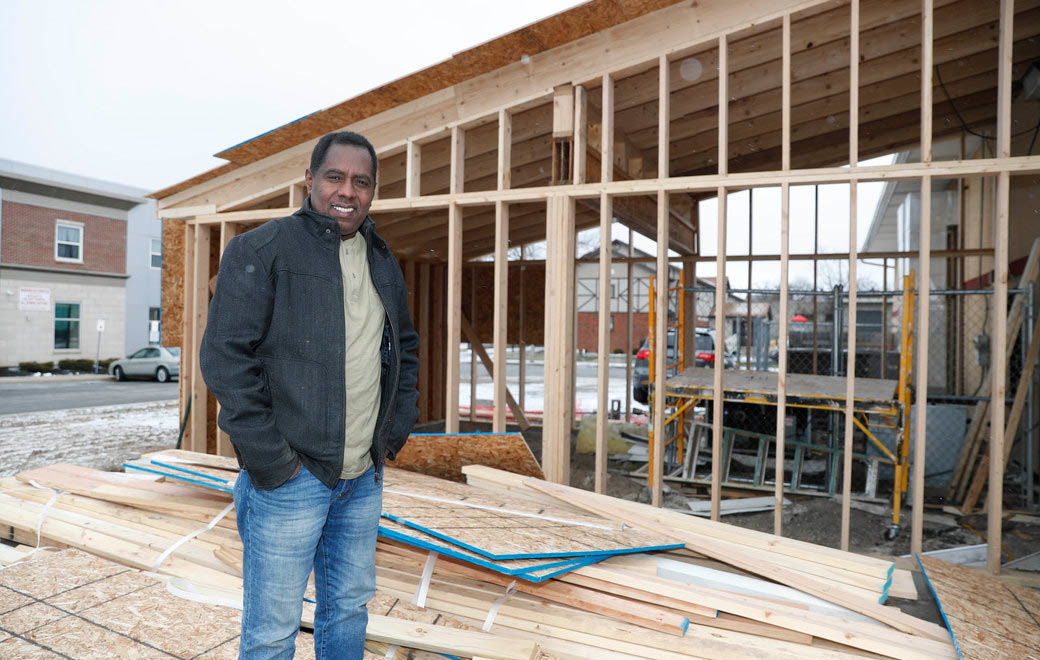 Ahmed Saleh, owner of Mandella's Market at Jefferson Avenue and East Ferry Street in Buffalo is building an addition on the back to carry fresh fruits and vegetables and prepared foods. He was assisted by the Buffalo Billion II's East Side Corridor Economic Development Fund. (Sharon Cantillon/Buffalo News)

Small businessman Ahmed Saleh took advantage of a new state program for the East Side with his $145,000 expansion underway at Mandella Market.

The expansion includes a new storeroom and kitchen to provide fresh fruits and vegetables and offer prepared foods at his convenience store on the corner of Jefferson Avenue and East Ferry Street.

"It is a great opportunity for me and for the East Side," said Saleh, an East African immigrant and SUNY Buffalo State graduate. "It has been a forgotten area for decades, if you look at the East Side honestly."

The plan focuses on nine areas along the north-south commercial corridors of Michigan, Jefferson, Fillmore and Bailey avenues. Portions of those streets will also get new streetlights, sidewalks, bike lanes and traffic-calming measures. The makeover, known as "complete streets," will promote walkability.

The plan calls for stabilizing jeopardized older buildings and refurbishing street facades. It seeks to help homeowners make improvements and avoid foreclosure, and it also targets abandoned properties that contribute to blight and unsafe conditions.

"MLK Park, Colored Musicians Club, Broadway Market and the Central Terminal are just some of the community assets we are investing in," said Eric Gertler, Empire State Development's acting commissioner. "These sites are key to strengthening the East Side’s economic potential, capitalizing on its history and celebrating the strong sense of cultural pride.”

"We knew we had this catalytic moment of $65 million going into the East Side," said Laura Quebral, the director of the University at Buffalo Regional Institute who helped bring the groups into the project. "This moment was a rare one, and they said there is a greater good here and we believe in it."

"It's a five-year initiative, and we're going to be at the table helping to provide guidance and insight through those five years," said Lawrence Cook II, vice president of the John R. Oishei Foundation. "We're not just writing a check. We're going to stay engaged."

The East Side project announcement last March came after the state invested $90 million from Buffalo Billion II in the Northland Corridor.

That project has seen vacant industrial buildings on the East Side repurposed for workforce training in advanced manufacturing through the creation of the Northland Workforce Training Center and the addition of Buffalo Manufacturing Works.

Now, a more comprehensive plan for the East Side is beginning to be implemented.

One approach in the plan calls for providing direct assistance to community anchors like MLK Park and the Buffalo Museum of Science.

Lights will be installed in MLK Park and its greenhouses refurbished. A road that runs through the park will be narrowed. The nearby business district is getting a complete street makeover from the northern edge of the park at North Parade to Best Street, with the City of Buffalo expected to extend that work to East Ferry Street.

Restoration of the nearby Buffalo Museum of Science's original front stairs will begin this year following decades of disrepair.

A master plan and marketing plan are expected to be completed this year to give direction to the Broadway Market. The plan aims to make the market more responsive to the immigrant-rich and increasingly diverse Broadway-Fillmore neighborhood.

Construction at the Central Terminal, expected to begin later this year, will activate a part of the concourse for year-round community use. Additional funds will be spent to tie the former train station more closely to the Broadway Market and the neighborhood.

"It's taking a whole swath of the hard-to-tackle East Side and really making a coordinated effort to partner with the community on a future," Pellegrino Faix said.

"I have heard from the Broadway-Fillmore community that it feels like a sense of stability has come," she said. "The state investments and the city's investments feel like something good is happening."

Other past and present community mainstays would be helped under the state's plan. Funds are expected to complete the restoration of the Varsity Theater, an anchor in the Kensington-Bailey district, as well as the restoration of the nearby, long-vacant former Schreiber Brewery on Fillmore. Torn Space Theater's expansion a few blocks away is underway.

New and recent projects are also being helped. Funds are being used to build first-floor retail space for the Nash Lofts, a mixed-use development under construction at Broadway and Michigan, and a building on Broadway anchored by Jericho Road Community Health Center and WNY Human Services Collaborative.

The plan also gives local business owners a financial incentive to make renovations. They pay the first 15% for up to $50,000 in interior and exterior improvements. Applicants are invited to work with an architecture firm to prepare plans for submission with their applications.

Applications are due Jan. 31, with decisions expected in February and March. Work is expected to begin this summer.

"We want there to be visual improvement on the street," said Stephen Karnath, executive director of Broadway-Fillmore Neighborhood Housing Services. "Just doing a roof without improvements to the facade wouldn't make an impact."

Al Cohen's Bakery, which employs 20 workers on Broadway, hopes its application is selected.

"We want to freshen up the facade," co-owner Chris Covelli said. "Part of the grant would allow us to build much-needed office space on the Broadway side of the building. I just received the initial rendering of our facade, and we're very happy with it. It's going to brighten up the corner."

"The program is great," Love said. "I was glad it's available because it's badly needed down here."

Love is waiting to find out the cost, but expects to redo the front of the building he's cut hair in for the past 28 years. He wants to change the front sign, windows and doors and present a "whole new fresh look" inside the barber shop.

Love said he has no qualms with the 15% buy-in for business owners.

Love is no stranger to government grants for economic development. He received $104,000 in city funds about a dozen years ago to refurbish his barbershop.

Each of the four corridors targets the locations where improvements are thought to have the most immediate impact. In the Broadway-Fillmore area, that's Fillmore between Paderewski Drive and Sycamore Street and between Reed Street and Memorial Drive. Both stretches open to the Central Terminal.

"Our goal is to have at least several projects under construction this summer – hopefully high-profile projects," Karnath said.

The geographic restrictions to Fillmore Avenue have some business owners unhappy.

Atiqur Rahman, a hardware store owner on Broadway who is helping other Bangladeshi immigrants navigate the application process, said there is significant interest. But at the same time, business owners located blocks from the target area who want to take advantage of the program are unable to.

Rahman said he hopes the program can be expanded in the future.

The East Side has 1,650 acres of vacant land and 850 vacant commercial addresses, according to the state's study. With that in mind, the plan calls for training East Side residents and building owners in real estate development.

"We had a lot of people that came to us in the community engagement process and said, 'I own this building, I want to renovate the second floor and do some apartments. I would do a coffee shop or a bookstore, but I don't know how to do it,' " said Amanda Mays, Empire State Development's regional director.

The program will provide access to individuals who can help business owners put together a budget and a proposal that can be shopped to banks and others for funding.

The application process to enter the program began this week. The program is expected to begin in April. Business owners who go through it will also be eligible for capital grants.

Another part of the plan provides funds to help stabilize and preserve at-risk historic buildings by enticing owners to redevelop them.

“We are losing buildings that could be a redevelopment opportunity," Mays said. "We want to find a way to stabilize mothballed buildings. Maybe we put $20,000 to patch the roof and then they enter the community real estate program and they're able to develop it.”

The complete street makeovers along the four corridors will be designed in the spring and will undergo a public planning process beginning with Bailey Avenue this summer. Completion of all four corridors is expected to take three years.

City officials want to reduce Main Street from Goodell to Ferry from four lanes to one lane in each direction.

The grants come from a five-year, $5 million fund set up by Empire State Development as part of a $65 million East Side Corridor Economic Development Fund.

Locations stand to benefit from the state's East Side $65 million initiative. The former Schreiber Brewery at 662 Fillmore Ave. is being restored for use by Buffalo Brewing Company. (Sharon Cantillon/Buffalo News)

Leroy Love, owner of Mr. Love & Sons Barber Shop at 1388 Jefferson Ave. in Buffalo is planning to use the state program to remodel his business., (Sharon Cantillon/Buffalo News)

Ahmed Saleh, owner of Mandella's Market at Jefferson Avenue and East Ferry Street in Buffalo is building an addition on the back to carry fresh fruits and vegetables and prepared foods. He was assisted by the Buffalo Billion II's East Side Corridor Economic Development Fund. (Sharon Cantillon/Buffalo News)