Subscribe for $1
Read Today's E-Edition
Share This
[BN] Chronicles: The origins of Buffalo’s Juneteenth Festival, 1976
0 Comments
Share this
Support this work for $1 a month
Steve Cichon

As America geared up to celebrate 200 years of freedom and independence with the celebration of the bicentennial in 1976, there were some in Buffalo who weren’t seeing their own stories reflected in the festivities.

“Such a celebration, one that Blacks and other poor persons can identify with, is necessary to remind us of the struggles that our forefathers encountered in the building of this nation,” said William L. Gaiter, then Executive Director of BUILD in a 1975 interview with Courier-Express writer Henry Locke.

“Juneteenth is not a date or a place, but a spirit,” said Claudia Sims, one of the founding mothers of the event.

“This celebration is necessary because we were kept out of the mainstream of this nation’s history, except for an occasional mention of some accomplishments of a select number of Blacks whose inventions were too great to hide," Gaiter said.

Gaiter, Sims and much of Buffalo’s Black community made the event an opportunity to elevate and be proud of their community, their people, and their African and African American history. Six young former drug users took it upon themselves to clean up and paint murals on boarded-up buildings along Jefferson Avenue where the festival was going to take place.

"One picture speaks louder than words,” said James Vaughan, one of the former addicts painting up Jefferson Avenue. "And if we can motivate the brothers and sisters and show them that life isn’t all about drugs, prostitution and the fast life, maybe they can elevate themselves to greater heights.”

Vaughan and the others wanted their murals to inspire respect. A painting on the historic, but then closed Pine Grill featured a zoot-suited pimp and a luxury car – but the words "Stop dope, lies, rape, prejudices and murder” made it clear that this wasn’t a celebration of that lifestyle.

"If we can make the people start respecting the walls, maybe it will spread and everyone will start respecting their community and themselves more,” artist Vaughan told reporter Henry Locke. Locke was a Courier-Express district circulation manager turned staff reporter who spent most of the 1970s reporting on issues of race and poverty in Buffalo.

With a freshened-up Jefferson Avenue, that first four-day festival featured a parade, artists, professionals, youth sports clinics with Buffalo Bills star receiver J.D. Hill and Buffalo Braves star Randy Smith. War Memorial Stadium and the Apollo Theater were main sites for the events. The king and queen were crowned at an event with the Swahili royal titles in the name – the Malik and Maliki Ball, held at the New Skateland at 33 E. Ferry.

Locke wrote “the revitalization of the Black business community came a step closer to reality” when 75,000 people attended that first Buffalo Juneteenth – even after rain delayed some of the festival.

The event "created a feeling of togetherness and showed that people in the Black community could come together in a unified effort to rebuild Jefferson Avenue," said Gaiter as the event drew to a close.

“The recent Juneteenth celebration here in commemoration of Black freedom proved that unity in the Black community is possible and that such a festival can be peaceful,” wrote Locke.

“We made liars out of all the doubters,” said Gaiter. And the police agreed.

The early Juneteenth festivals were more than just a party or even just a commemoration of the day enslaved people gained freedom in Texas – it was about showing Buffalo as a whole what Buffalo’s Black community was all about.

“Now that the first two festivals are history, all of the doubting Thomases should be convinced that major programs can be held in the heart of the Black community and maybe they now will join us in our future effort,” Gaiter told Locke after the second event.

"We can’t do it alone,” Gaiter continued. ‘‘But with the help of the total community, I'm sure that the Inner City can be revitalized and made into the growing community it was before it was abandoned by city officials.”

Perhaps the biggest sign that Juneteenth has become a transcendent event is that the original meaning can sometimes get lost in the fun of it all.

Following Buffalo’s 10th Juneteenth celebration in 1985, Eva M. Doyle wrote, in part, in the Buffalo Criterion, “Juneteenth should be more than a carnival or more than food. It should represent essence of the Black community in all its struggles, historically, culturally, politically, economically and socially. And hopefully in the future, it will.”

In 2021, as Buffalo celebrates its 46th Juneteenth, the nation looks to the years ahead – when Buffalo’s celebration and commemoration will be a part of the nationwide federal observance of the day when slavery ended and all people finally became free.

How some companies are celebrating Juneteenth in unique ways this week

Newspaper clippings from the first and second Juneteenth festivals in 1976 and 1977.

Courier-Express reporter Henry Locke closely followed Buffalo's Black community during the 1970s, and was among the first to report on the planning of Western New York's first Juneteenth Festival. 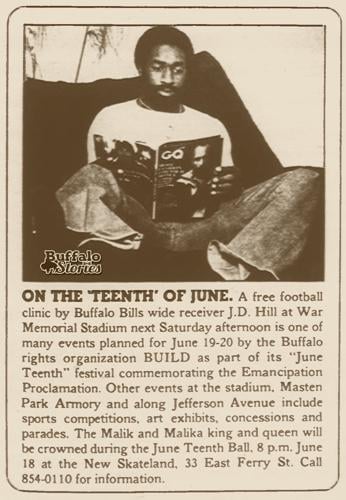