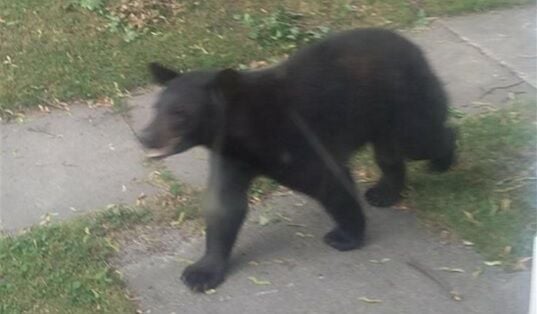 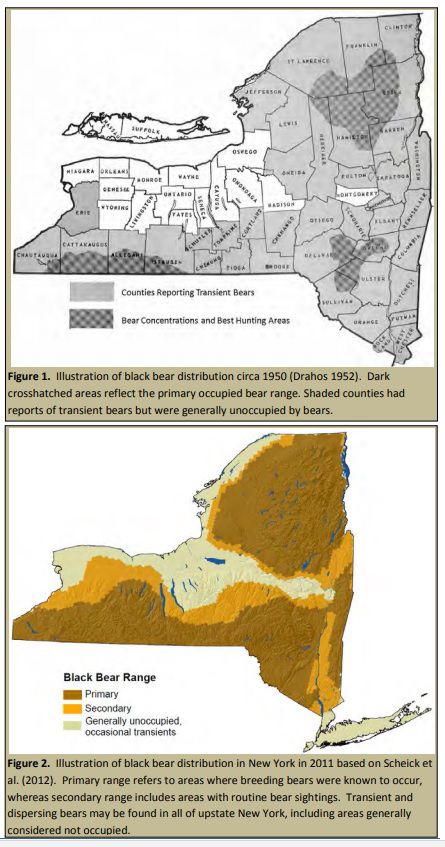 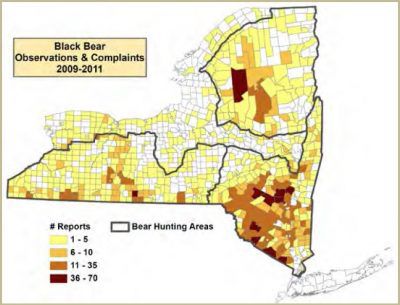 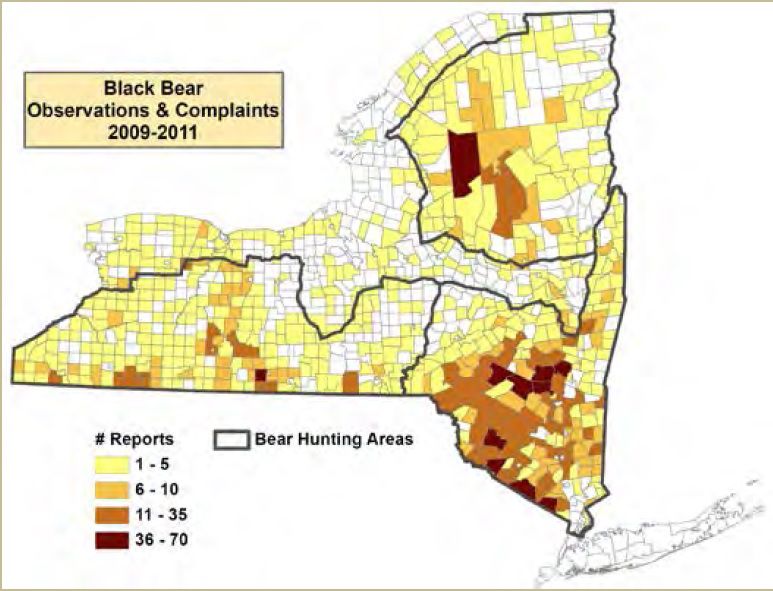 In a week's time, there's been a bear spotted in Clarence Center, in several spots in Amherst and in North Tonawanda, Wheatfield and Youngstown.

Another report came early Tuesday morning near the escarpment in Lewiston.

Though the numbers are small, reports to the state Department of Environmental Conservation this summer of bear sightings in Western New York have doubled from a year ago, DEC wildlife biologists said.

"These reports can add up quickly when one bear is observed and reported to us by a number of people in the same area,"  said Ryan Rockefeller, a DEC wildlife biologist.

Wildlife experts can't say for certain why there have been more sightings this year, but they do know that the range of bears has expanded over recent decades.

Rockefeller said it's possible a single bear is racking up a bunch of the reports all at once. Or, maybe not.

"It wouldn’t be surprising if it was the same bear," Rockefeller said.

Without distinctive markings such as ear tags, biologists haven't been close enough to tell if the bears – or bear – are male or female.

Tuesday morning, Lewiston Police were searching for a bear after a caller told them it was headed up the Niagara Escarpment near Mohawk Street.

It was the latest in a series of reports over the last week or so from North Tonawanda, Amherst and Clarence.

The local range of black bears is primarily confined to the Southern Tier counties of Western New York, the DEC said.

But it’s not unusual for the animals – especially younger male bears – to be on the move into secondary, higher populated locations this time of the year, Rockefeller said.

In general, DEC data shows bear populations in western and central New York State may have slowly increased over the last two decades.

It's hard to get a good census on bears because of their reclusive nature, but biologists can make some assumptions on population based on the numbers and ages of bears harvested during hunting season.

For the first time on record, more than 1,000 bears were taken across the Southern Tier by hunters in 2014, according to the DEC's 2017 black bear harvest summary. That number has remained consistent over the last four years.

What's certain is that their range is expanding.

Land use could be the chief explanation for the expanded range of area black bears.

As recently as the mid-1990s, DEC data shows their range was confined mainly to the extreme Southern Tier near the border of Pennsylvania. But bears across Western New York have more habitat as agricultural lands gradually subside into forest and shrubbery.

The DEC's most recently published data shows there were between 1 and 5 reports of bear sightings in the towns of Amherst, Clarence and Newstead over the three-year period from 2009 to 2011.

June and July is their time to hunt for food and a mate.

Rockefeller said it's unclear why there have been so many reports this year — it's double the number of last year's reports, but on par with 2016 — but it could be because these sightings are coming from areas with higher density of human populations.

“When a bear gets into an area like this, the sighting reports go up really quick,” Rockefeller said.

Earlier this spring, the DEC received reports of bear sightings in Hamburg, Aurora and Elma.

Rockefeller said that unless the bear or bears frequenting suburban towns become a public nuisance, the agency is content to "let nature do its thing."

"It's not our first reaction to get up there and capture the bears," Rockefeller said. "They are usually pretty good about finding their way out."

And, Rockefeller said, this particular bear isn't being much of a nuisance, so far.

"It's just kind of walking through," Rockefeller said.

To make sure it stays that way, experts encourage the public to enjoy the novelty, but become bear savvy.

"It's a rare occurrence that you get to see a black bear," Rockefeller said. "If it's just a bear being a bear, obviously don't approach it. Keep your distance."

Into the bear's den: Biologists check out mother bear and her three cubs

Having black bears reclaiming their former ranges is a conservation success story, but in almost every case of problems with bears, it's caused by humans, said John Kanter, a senior wildlife biologist at the National Wildlife Federation.

"People are making it easy for them to get a quick and easy meal: bird feeders, improperly stored garbage, pet food on porches, inadequate protection of backyard chickens, open composting — the list goes on," Kanter said. "People can avoid conflicts with bears by removing (these) fast food opportunities."

"You're never going to teach a bear not to go after free bird seed or free garbage," Rockefeller said. "Once they get it once, they are very good at remembering where they got food. Every time they get food, it's like they get a reward to come closer to the house."

And under no circumstances should people intentionally feed bears, biologists said.