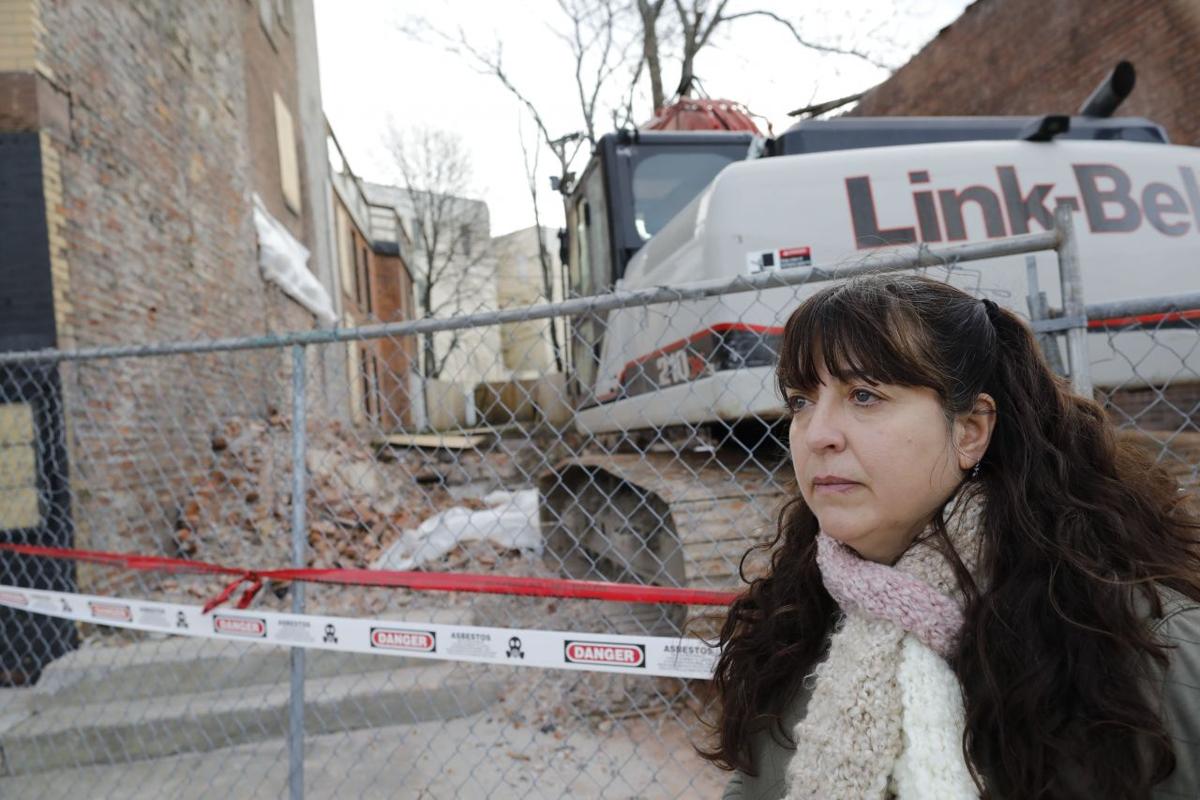 Susan Adamucci, owner of Two Wheels Bakery, looks into the pit where the building that housed her business since 2018 was demolished after the roof collapse rendered the 1860's-era building unsafe, Sunday, Dec. 8, 2019. She estimates upward of $90,000 of restaurant equipment was lost in the demo, a major setback for her business, which is continuing with the help of friends. (Derek Gee/Buffalo News) 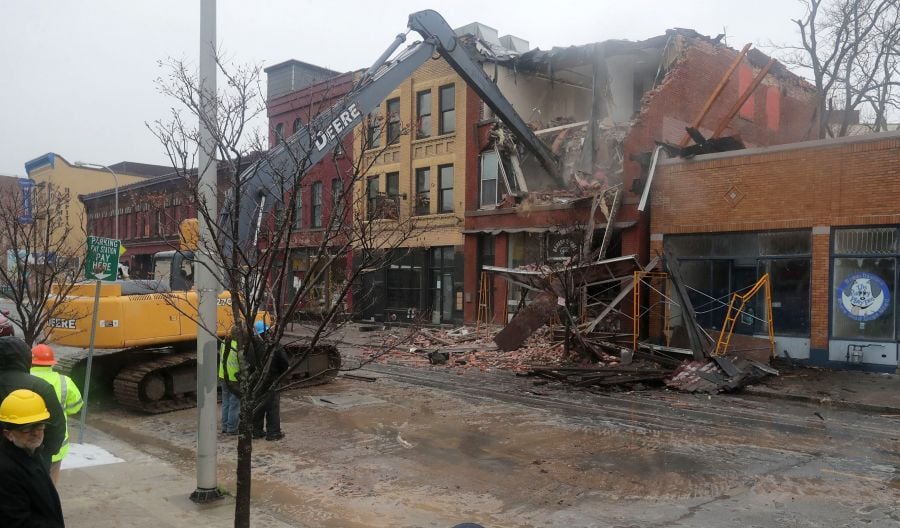 Two Wheels Bakery & Cafe was a tenant at 435 Ellicott St., where an emergency demolition was ordered by the fire marshall Wednesday. (John Hickey/Buffalo News) 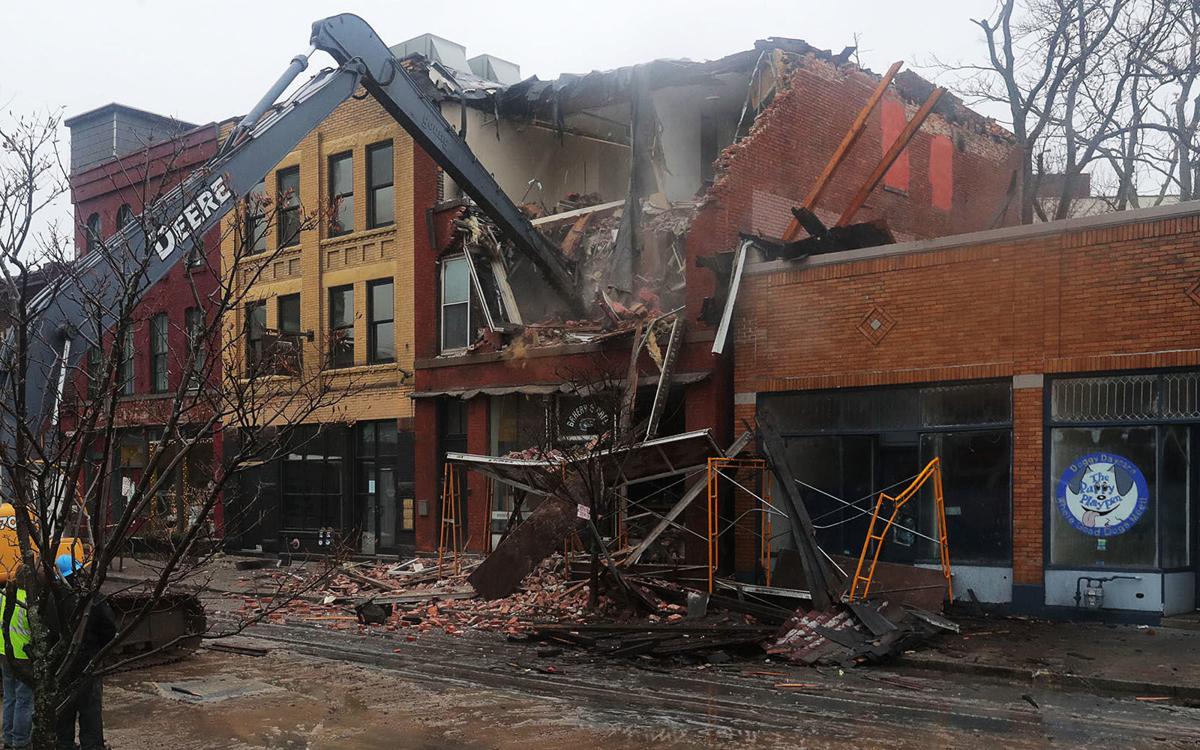 Two Wheels Bakery & Cafe was among the tenants at 435 Ellicott St., where an emergency demolition was ordered by the fire department. (John Hickey/Buffalo News)

As Susan Adamucci drove her 12-year-old son to school last Wednesday, she heard on the radio that a building was in peril in downtown Buffalo.

A short time later she learned the property being torn down included Two Wheels Bakery & Cafe, which she opened in April 2018 as the city's lone fully gluten-free bakery.

Adamucci estimated the overall loss in bakery and restaurant equipment at between $80,000 and $90,000.

"This whole experience has been devastating," Adamucci said. "I have a family. I'm the sole breadwinner in that family, and I put a lot of time and money and energy and love into this venture."

The emergency demolition at 435 Ellicott St. was issued after the roof collapsed inside the 1860s-era, three-story Italianate brick building. Adamucci rushed to the site, but could only watch helplessly knowing her two ovens, double refrigerator and freezer – as well as a ventless hood and an exhaust hood that by themselves cost $39,000 – were irretrievable.

Adamucci, 50, is expecting to find out this week if she will recoup equipment losses from her insurance company. She also plans to sue property owner Bruce Adler of Buffalo Properties Ltd., registered downstate in Nyack, to cover lost income and other losses.

This was the second major structural collapse at the building over the past 3½ months.

Two Wheels Bakery had been closed since Aug. 21, when a chimney crumbled, damaging the roof and causing bricks to fall on the south side of the building.

In addition to Two Wheels, the building had two upstairs apartments that also became uninhabitable that day.

Flying bricks also forced the closure of Puppy Playpen, located in an Adler-owned building next door.

A structural engineering report called for by the city specified the damages in need of repair.

"At that point, the building was definitely salvageable," Adamucci believed. "All Adler needed to do was get the roof done and repair a few rows of bricks."

But no work was done during the 104 days that transpired between the first roof collapse on Aug. 21 and the Dec. 4 emergency demolition triggered by the additional roof damage.

Adler, who owns multiple properties on Ellicott and Oak streets, has a history of housing court violations. But the seven citations written up for 435 Ellicott St. – six filed on Aug. 22, and a seventh on Sept. 4 – failed to make their way to Housing Court Judge Patrick M. Carney during that time period.

Adler, whose insurance claim in August was rejected, could not be reached to comment.

For Adamucci, the demolition capped a difficult period with her landlord that began after she signed a lease in November 2015. Adler failed to reconfigure unsafe basement stairs or put in wooden flooring stipulated in her lease, Adamucci said. She was forced to pay for the work so she withheld rent for a year to compensate, she said.

Adamucci was still determined to make the space work because she felt the location was ideal.

"I wanted to be downtown and easily accessible," Adamucci said, referring to its proximity to the Kensington Expressway. "I loved that it was at the end of the 33 to make it easy for people that were not in the city, or were even a little afraid of the city to come in, too. It also had a beautiful courtyard in the back.

"I also loved the beautiful brick building," she said. "I really felt like the building had been sitting for the most part, but we were going to bring life back to it."

Adamucci suffers from an autoimmune disease, and she opened her gluten-free bakery in April 2018 to be a safe place to eat for people unable to digest gluten. The chocolate cherry and lemon currant scones, red velvet cake, double chocolate cookies and other offerings were meant to appeal to everyone.

"A lot of people who were not gluten-free were coming in for these items," Adamucci said. "That was the concept.  When I hit a recipe and my tester said I can't even tell this is gluten-free, that's when I had a winner."

The growing business and glowing testimonials on social media gave her confidence she had made the right choice.

"We had a phenomenal summer," Adamucci said. "We were showing a lot of growth and were beginning to cover all of our operating costs," she said, noting it can take two years for a restaurant to operate in the black.

But Adamucci said she could not ultimately compensate for the landlord's neglect.

"I was just trying to run my business and make it work,' Adamucci said. "I really felt like I had this horrible landlord but if I just focused on the business and paid my rent then I would be OK. It didn't work out."

Adamucci said she has been deeply moved by the "the support and love" received the last several days. The owners of Feature Eatery, located downtown, have allowed her to use their kitchen so she can keep her wholesale business going, including baking gluten-free pies for Thanksgiving and preparing baked products for Christmas.

"They have allowed us to come into their kitchen twice a week since this happened in August, and they won't let us pay them," Adamucci said. "It makes me want to cry to think about the kindness that they have shown us."

A GoFundMe campaign to help Two Wheels recover can be found at gofundme.com/f/two-wheels-bakery-amp-cafe.

Adamucci has plans to rebound by relocating to not one but two sites.

One would be a retail baking operation she plans to open in early 2020 at a building rented at 1006 Grant St. in Black Rock.

A cafe is also planned on the West Side at the corner of Plymouth and Pennsylvania avenues. She expects to open in the spring with the help of an investor.

Adamucci said she hopes the city will be prodded by what happened to better police out-of-town landlords who don't maintain their properties.

"There's a big hole in this beautiful block," Adamucci said. "People could say it was an old building, but there are tons of buildings that are the same age that are fine.

"I hope the city will now put in place policies to hold commercial landlords responsible for these buildings that are just crumbling," she said. "Imagine if – God forbid  – anyone had gotten hurt that day."

Despite a host of challenges, Two Wheels Bakery at 1006 Grant St. opened Aug. 21.

Susan Adamucci, owner of Two Wheels Bakery, looks into the pit where the building that housed her business since 2018 was demolished after the roof collapse rendered the 1860's-era building unsafe, Sunday, Dec. 8, 2019. She estimates upward of $90,000 of restaurant equipment was lost in the demo, a major setback for her business, which is continuing with the help of friends. (Derek Gee/Buffalo News)

Two Wheels Bakery & Cafe was a tenant at 435 Ellicott St., where an emergency demolition was ordered by the fire marshall Wednesday. (John Hickey/Buffalo News)

Two Wheels Bakery & Cafe was among the tenants at 435 Ellicott St., where an emergency demolition was ordered by the fire department. (John Hickey/Buffalo News)