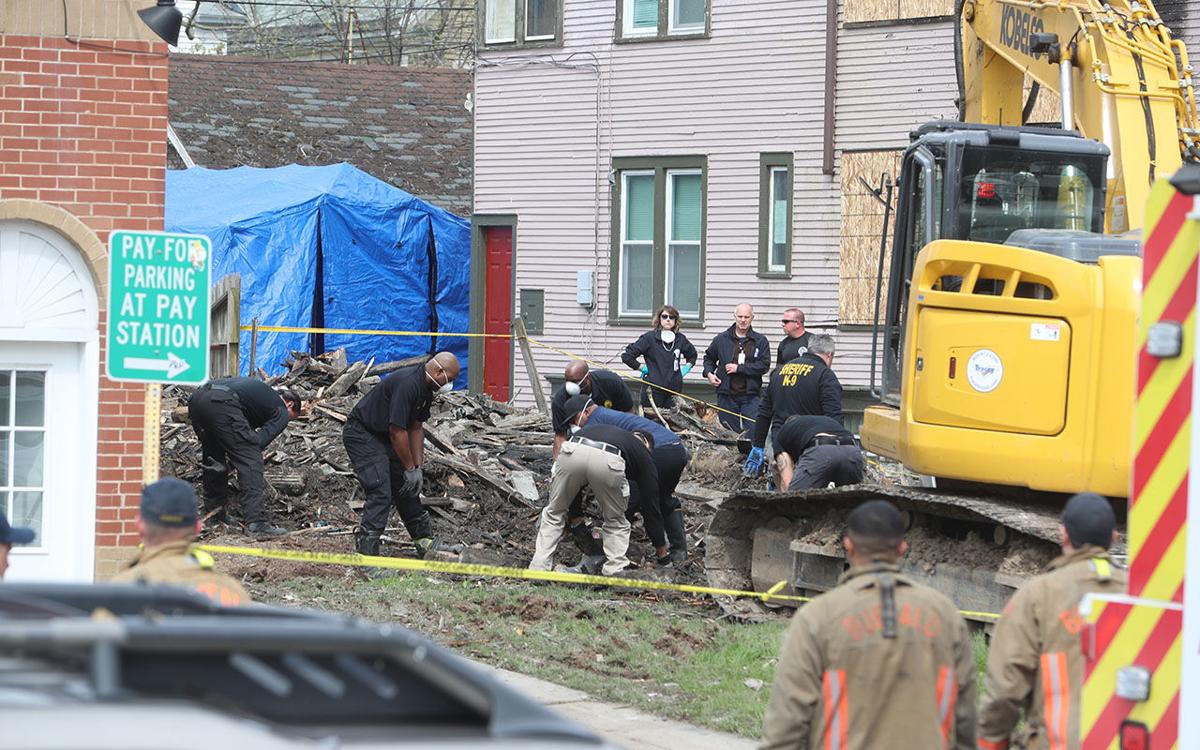 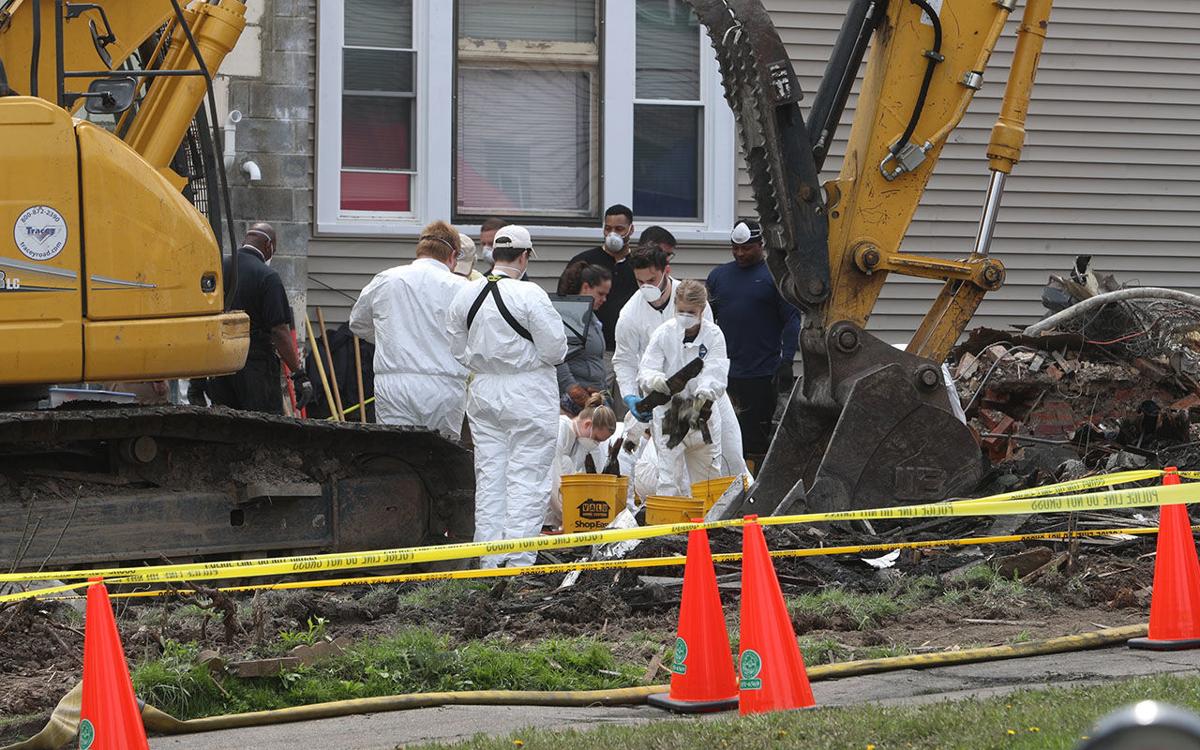 Forensic Anthropology students from Mercyhurst College assist digging by hand in search human remains at a fire at 1074 Elmwood Ave., as teams of investigates look for more remains, in Buffalo, on Thursday, May 9, 2019, after Buffalo Fire Commissioner William Renaldo confirmed human remains were found at site. (John Hickey/Buffalo News) 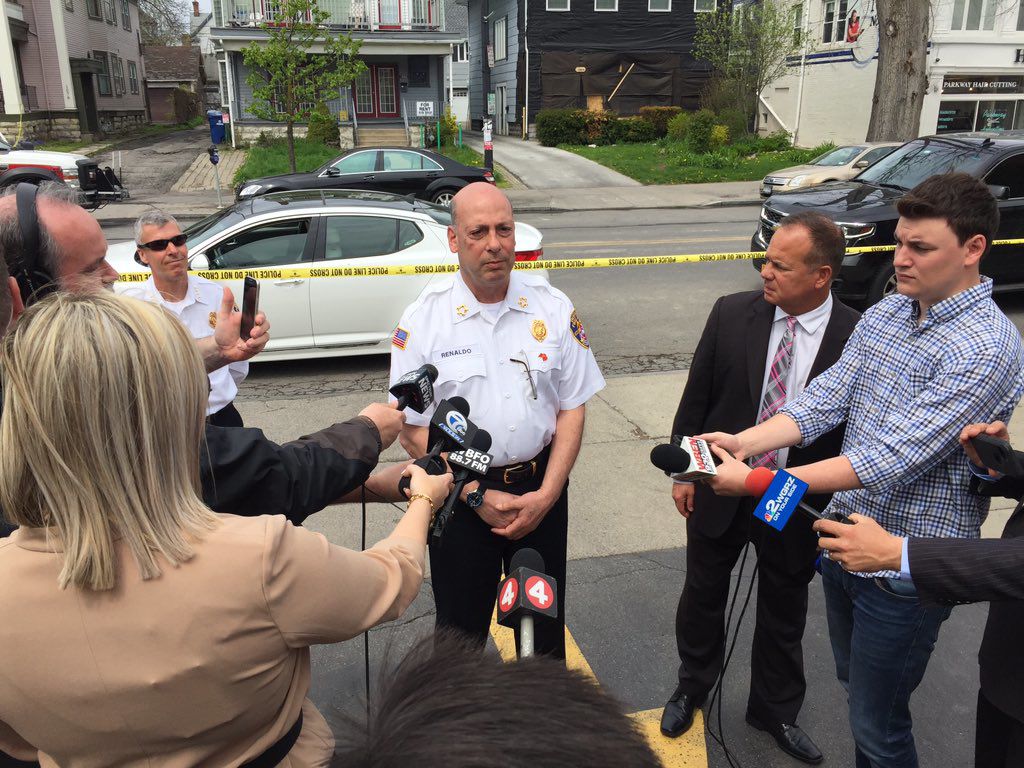 Fire Commissioner William Renaldo updates reporters on the remains found in the rubble of an Elmwood Avenue house destroyed by a fire. (Keith McShea/Buffalo News) 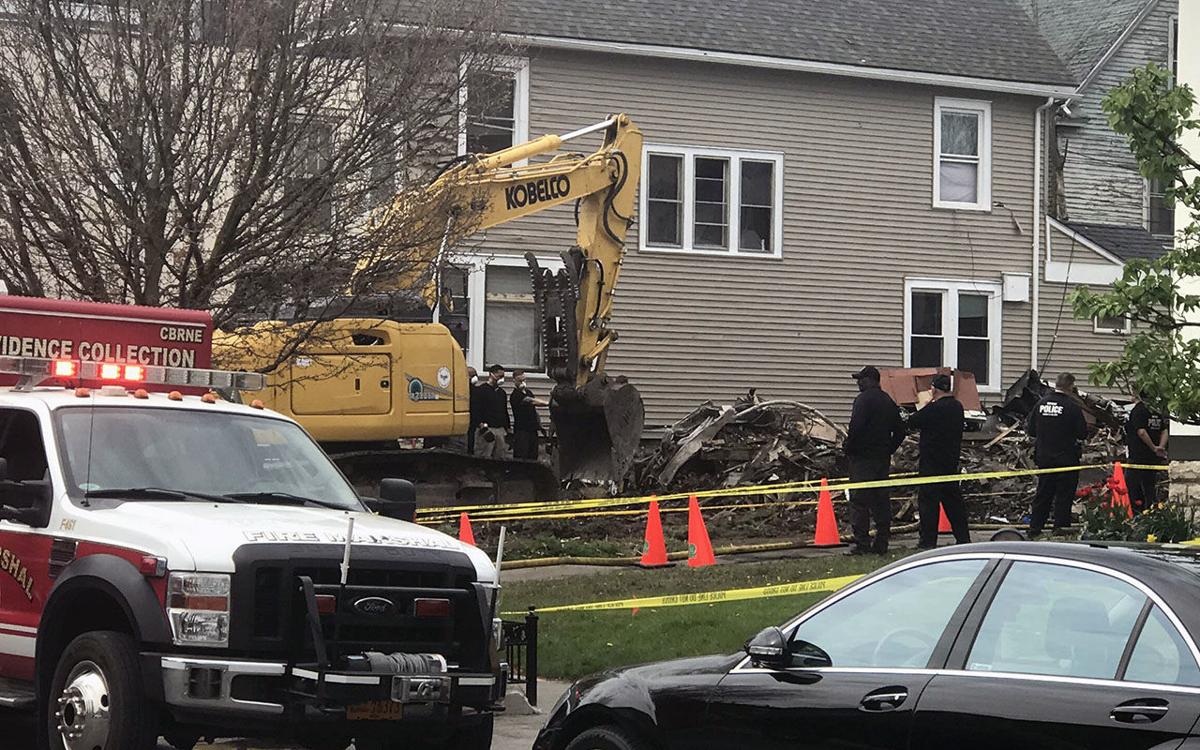 Buffalo police and fire investigators search the remains of an Elmwood Avenue fire for a missing man on Wednesday, May 9, 2019. (John Hickey/Buffalo News)

A police source earlier had reported human remains and clothing had been found at 1074 Elmwood Ave.

Curtis Brown, 55, is the tenant who is unaccounted for.

Renaldo said later Thursday that 90 percent of the remains had been located and that the medical examiner confirmed the remains were from one body.

"Late this afternoon, we just discovered upwards of 90 percent of the body of the individual that we think we're looking for," Renaldo said, at a 5:20 p.m. news conference across from the excavation site.

Renaldo said it will take time to make an identification. An autopsy is scheduled for 8 a.m. Friday, he added. "Then we'll try to make our final determination of who this person is," Renaldo said.

Renaldo said cadaver dogs from the Erie County Sheriff's Office “hit” on an area last night, which prompted the continued investigation at 8 a.m. Thursday. Once the dogs reacted to a spot in the wreckage, the Erie County Medical Examiner’s Office confirmed there were human remains there.

"In this case they proved to be very valuable," he said, of the dogs.

Renaldo said there was a great deal of inter-agency cooperation in locating the remains, including assistance from the Sheriff's Office, the Buffalo Department of Public Works, the Medical Examiner's Office and Buffalo Police.

"We also had some students from Mercyhurst (University in Erie, Pa.), who were here at the request of the Medical Examiner's Office who helped us sift through the debris this afternoon," Renaldo said. "I'm told they assisted a great deal," he added.

Dennis Dirkmaat, chairman of the applied forensic sciences department at Mercyhurst, serves as adviser to the 13 graduate students in forensic anthropology who took part in the excavation Thursday.

"Typically, we're involved with remains out in the woods or buried bodies and when we find the bones, they're not burned and the tissues are not burned. These fire scenes are probably the most difficult of the ones that we deal with, other than, say, plane crashes and things like that," Dirkmaat said.

The three-alarm fire started at around 2 a.m. Wednesday. The three-story structure burned nearly to the ground in the early morning hours.

Later Wednesday morning, an excavator demolished the remainder of the building, knocking down walls and other parts of the structure.

On Thursday, the same excavator was assisting personnel from the fire department and Medical Examiner's Office in the search for remains.

Authorities said five people lived in the building and that they believed at least one of the residents was not home at the time of the fire. The other three male tenants were sent to the hospital.

Until Thursday, they had been unable to account for the fifth resident.

Renaldo said the cause of the fire is not known.

He said investigators were waiting to talk to one of the 60-year-old tenants, with hopes that might help them determine the cause. "The one person who may be able to shed a little light on this is still at (Erie County Medical Center) intubated and unable to communicate," Renaldo said.

Renaldo said he was not aware of any code violations at 1074 Elmwood.

Excavation operations will resume at about 8 a.m. Friday.

"We'll probably work throughout the day to get the rest of the house down and hauled away," Renaldo added.

Forensic Anthropology students from Mercyhurst College assist digging by hand in search human remains at a fire at 1074 Elmwood Ave., as teams of investigates look for more remains, in Buffalo, on Thursday, May 9, 2019, after Buffalo Fire Commissioner William Renaldo confirmed human remains were found at site. (John Hickey/Buffalo News)

Fire Commissioner William Renaldo updates reporters on the remains found in the rubble of an Elmwood Avenue house destroyed by a fire. (Keith McShea/Buffalo News)

Buffalo police and fire investigators search the remains of an Elmwood Avenue fire for a missing man on Wednesday, May 9, 2019. (John Hickey/Buffalo News)