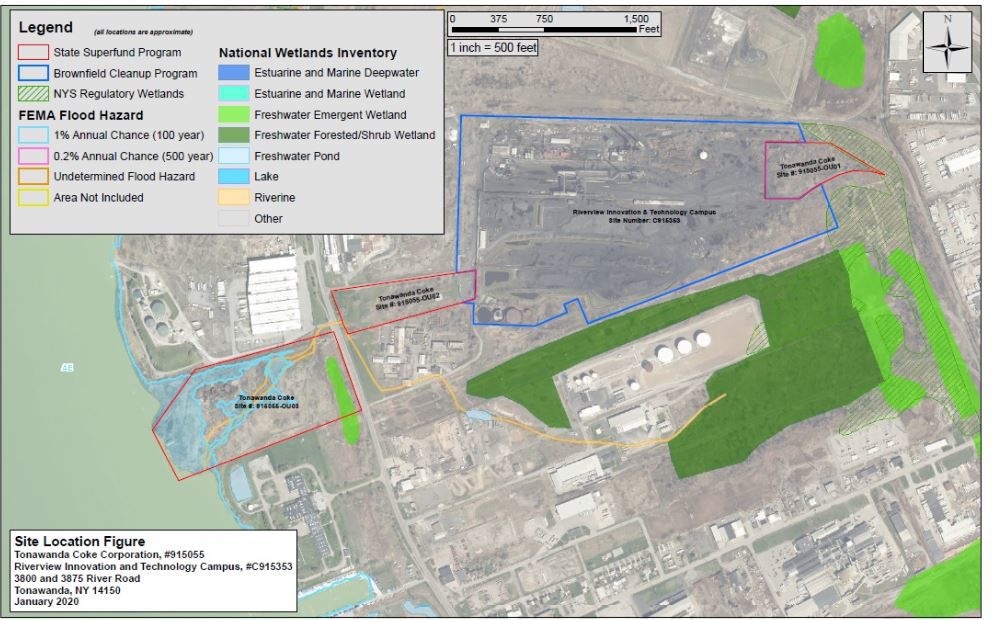 Tonawanda Coke's toxic legacy – the subject of lawsuits, criminal prosecutions and a large-scale corporate bankruptcy – is not limited to the brownfields site a local developer wants to transform into a campus for data centers.

Now shut down, the former manufacturing plant is also home to a state Superfund site with three separate parcels of land considered toxic enough to be a threat to human health.

One of the parcels is a 26-acre site bordering the Niagara River.

On Friday, the state announced plans for cleaning up and redeveloping a large portion of the former coke plant, raising questions about what will happen to the Superfund site.

Two of the site's three parcels adjoin the area earmarked for a brownfields cleanup by Jon M. Williams, the Buffalo developer who bought the property as part of Tonawanda Coke's liquidation.

In announcing their approval of Williams' brownfields'' application, state environmental officials also made public a new consent decree with Honeywell International, which owned the plant at one time.

The consent order means Honeywell accepts responsibility for the on-site contaminants at the Superfund site and will complete a full investigation and remediation, according to the state.

"With the agreements announced today, DEC will ensure the former plant site will be responsibly and aggressively cleaned up under the state’s strict standards so that it can be redeveloped and help contribute to the region’s economy,” Basil Seggos, commissioner of the state Department of Environmental Conservation, said in a statement.

Williams said his project will have no direct impact on the Superfund cleanups but, in combination with them, will result in a comprehensive remediation of the entire site.

“The two programs essentially run side by side and are governed by the same regulations, the same enforcement measures, and the same design criteria," he said Monday.

Clean Air Coalition, the group most responsible for casting a spotlight on Tonawanda Coke's environmental crimes, is opposed to Williams' brownfields plan and instead is pushing a federal Superfund cleanup.

The coalition believes a brownfields approach will allow Tonawanda Coke's polluters to walk away from much of their responsibility.

The group is also questioning the wisdom of using a brownfields strategy on part of the site and a Superfund approach on three other portions, two of them adjoining the brownfields area.

"The state has already deemed three portions of this site to be hazardous to human health," said Rebecca Newberry, executive director of the coalition. "So why make the decision to enlist 86 adjoining acres into a separate program providing tax credits."

Newberry said it's hard to believe that the dangerous contaminants that led to three Superfund designations don't exist elsewhere given two of the sites' proximity to the brownfields' location.

"This should be one site, a state Superfund site or a federal Superfund site," said Judith Enck, a former regional administrator with the U.S. Environmental Protection Agency. "I've been there and this is one heavily contaminated site, especially near the river."

Enck called the state's mixed approach "baffling" and asked, "Why would you use state tax credits when you have a known polluter?"

She also thinks the state is setting a dangerous precedent that will encourage other polluters seeking to escape responsibility for their actions.

The state announced the new consent order on Friday but it's unclear how it may differ from the only other consent order at Tonawanda Coke – a 2019 decree requiring Honeywell to clean up the Superfund site along the Niagara River.

As a result of that order, the Environmental Protection Agency mobilized a team of experts just days after the plant closed to conduct "emergency response activities" at the riverfront site.

The decree also details the EPA's concerns about the possible release of hazardous material into the environment and points to three above-ground storage tanks with known contaminants inside. The agency says the tanks have been damaged and weakened by standing water.

Honeywell, in a statement Monday, said it will work hand in hand with Williams and the DEC while cleaning up the three parcels of contaminated land.

"For example, investigations will be done at the same time, and data collected for both programs will be used by DEC and both parties,” the company said in a statement.

The DEC, in its announcement Friday, said the consent decree will ensure that all three sites are cleaned up and, in combination with Williams' brownfields project, lead to an overall site that is, not just clean, but also reusable.

Unlike the Superfund, the brownfields program provides for the demolition of buildings and other site improvements, Williams has said in the past.

His redevelopment plan is the latest chapter in the history of a riverfront venue that, in recent years, came to symbolize environmental degradation.

A fixture in the town for decades, Tonawanda Coke was convicted of criminal wrongdoing at a federal court trial and fined $25 million.

The company shut down in October 2018.

The Egyptian cookbook for the visually impaired

The Egyptian cookbook for the visually impaired

Later this summer, state officials will take the first step in determining what a century of industrial use left behind at the Tonawanda Coke plant. Their plan, which was unveiled Wednesday, is already attracting criticism.

The state Department of Environmental Conservation and the Town of Tonawanda have formed a new community-based organization to support the cleanup and revival of the former Tonawanda Coke Corp. brownfield site.

The demolition of the smokestacks, planned for June 5, is a sign of progress in the cleanup of the Town of Tonawanda brownfield site, where remediation efforts began in 2019.

Demolition of smokestacks a milestone in Tonawanda Coke cleanup, but 'much more work to be done'

Developer Jon Williams, who bought the property with plans to revive the 125-acre industrial wasteland as a campus for data centers, said his firm has already made considerable progress in remediating the property.