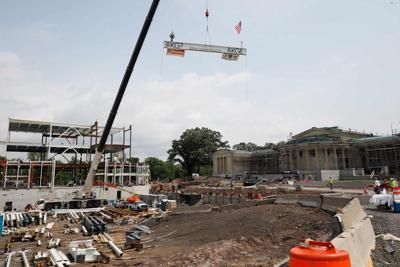 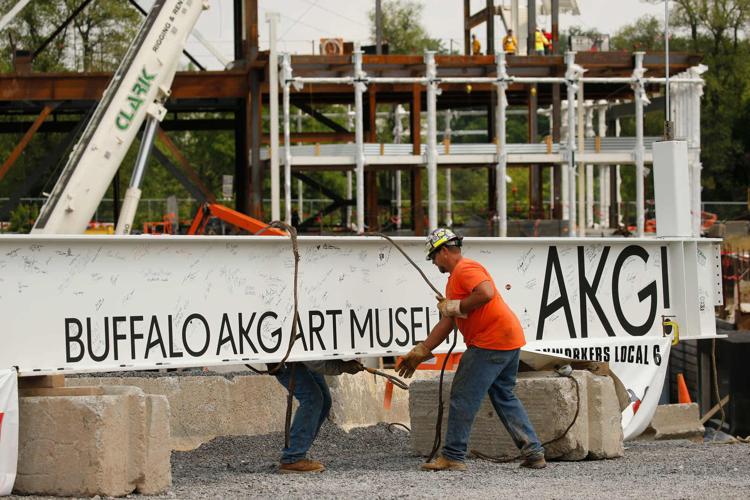 Workers carefully affix the rigging to the final steel beam before it is lifted to the top of the Albright-Knox's new Jeffrey E. Gundlach Building during a topping out ceremony to mark the completion of the steel frame, Wednesday, July 7, 2021. 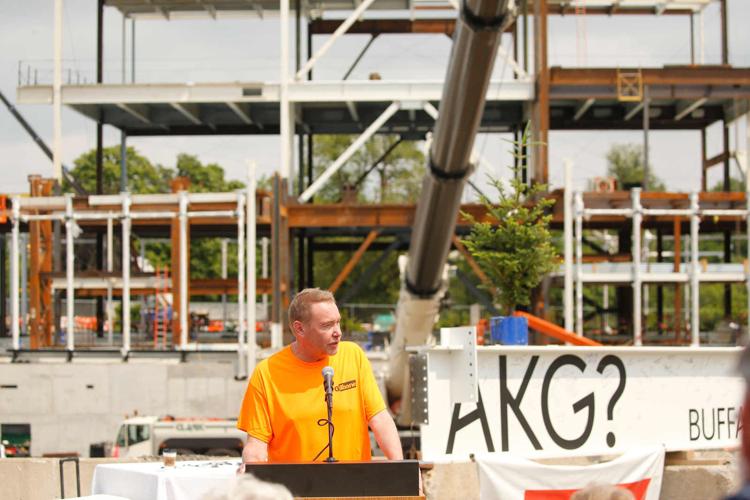 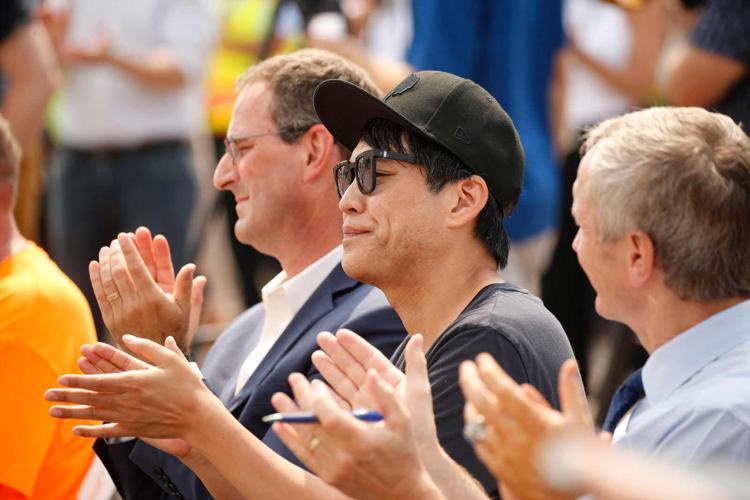 Shohei Shigematsu, the lead architect for the AK360 project, center, applauds during the topping out ceremony to mark the completion of the steel frame of the Albright-Knox's new Jeffrey E. Gundlach Building, Wednesday, July 7, 2021.

As a crane lifted the last steel beam into place Wednesday on the Albright-Knox Art Gallery's new building, money continued to come into the museum's treasury to meet a patron's $2.5 million challenge grant.

Some $1 million has been pledged in the three weeks since Jeffrey Gundlach made the matching grant offer, said Janne Siren, the museum's director.

"If the government monies come in and we make this match, we'll be nearly at the finish line," Siren said.

In addition, Rep. Brian Higgins has a $1 million request before the House Appropriations Committee to pay for the nearly 1-acre lawn that will replace a surface parking lot and cover an underground parking garage now under construction.

Together, the three government payouts would account for $8.5 million, leaving just $2 million more to be raised.

Other funding sources are also being pursued, Siren said.

Siren said he was encouraged  by the community's response to Gundlach's matching grant offer.

"It was incredible to see how fast the community reacted," Siren said.

Museum officials, staff, supporters and political leaders gathered for the topping out ceremony Wednesday for the new structure, to be called the Jeffrey E. Gundlach Building.

With the steel frame in place, Gilbane Building Co. will begin pouring concrete floors in the Gundlach Building. Installation of the glass walls is expected to follow in the fall.

"This is a remarkable moment," Siren said. "Much work remains to be done in the coming year, but the topping out of the Gundlach Building is a potent symbol of just how far we have come since breaking ground in November 2019."

The expanded museum, at a cost of $168 million, is expected to reopen in fall 2022, three years since the museum closed in November 2019. When it reopens, the museum will become known as the Buffalo AKG Art Museum. AKG stands for the museum's major contributors: John J. Albright, Seymour H. Knox Jr. and Jeffrey E. Gundlach.

"That took leadership to do that in July 2020," Siren said. "It solidified our board's belief in the project at a time when the world was surrounded by a pandemic."

Poloncarz said he honored the county's commitment knowing it would help move the project along and keep people working.

A new report by UB Regional Institute concludes the construction of the new campus has already brought significant economic benefits for the city, region and state.

The report said 84% of the construction money is being spent in New York State, with 52% in Erie County and 21% in Buffalo.

"Every dollar invested in the construction of the Buffalo AKG Art Museum generates twice as much in total economic impact for New York State," the report said.

Annual economic impacts of the expanded museum are projected from $36 million to $47 million. At least 134 full-time employees are anticipated when the museum reopens, and an increase of 80,000 visitors are predicted that would project annual visitation between 185,000 and 205,000, about 40% from out of town, the report said.

An estimated $3 million to $4 million in local and state taxes are expected to be collected.

The semi-transparent building being erected on the northern end of the campus, along Elmwood Avenue, will allow the museum to more than double its exhibition space and serve as the new entrance.

The new building calls for an indoor sculpture terrace that will encircle the main galleries and provide a 360-degree wraparound view of the surrounding landscape.

A bridge will connect the new North Building and E.B. Green's historic 1905 building, and improve the museum's ability to handle and transport valuable artwork. The building is undergoing roof, masonry and drainage repairs and re-creation of the grand staircase.

The 1962 Gordon Bunshaft addition will be used for educational purposes and exhibition space, and a 6,000-square-foot community space will be marked by a "Common Sky" sculptural canopy.

The Editorial Board: Progress at Albright-Knox, new role for Roswell Park worth celebrating

A couple of notable developments in Buffalo shouldn’t go unheralded:

A fire Wednesday on the roof of Albright-Knox Art Gallery's 1905 building did no damage to the building or artworks inside, Gilbane Construction said in a statement.

Titled "Infinity Room – My Heart is Dancing into the Universe," the piece is one of 20 in a collection by Kusama and is a room covered on all six sides with mirrors and filled with polka-dotted lanterns that change color.

It is easy to see the progress of the Jeffrey E. Gundlach Building two years into construction on the Albright-Knox Art Gallery grounds, but Covid-19-related supply chain problems have pushed its reopening as the Buffalo AKG Art Museum into the first half of 2023.

'Common Sky' installation to begin at Albright-Knox this week

The canopy, designed by Danish-Icelandic artist Olafur Eliasson and German architect Sebastian Behmann of Studio Other Spaces, is one of the museum's most significant additions in the expansion now underway.

All of the exterior work should be done by fall, said Jamie Robideau, the museum's director of facilities planning and management, with interior work completed over the winter months, leaving landscaping as the last step of the project.

As the AK360 expansion nears its end phase at the Albright-Knox Art Gallery, take a look back on all of The Buffalo News' coverage of the mass…

The Buffalo AKG Art Museum, previously known as the Albright-Knox Art Gallery, announced today that its new three-story translucent building under construction will open May 25, 2023, along with the museum's extensively renovated 1905 and 1962 buildings.

The billionaire bond trader and investor who grew up in Snyder announced the community challenge grant Tuesday on Twitter.

Most of the money came from the sale of Luca della Robbia's circa-1450 Relief of the Madonna and Child, which sold for slightly more than $2 million. 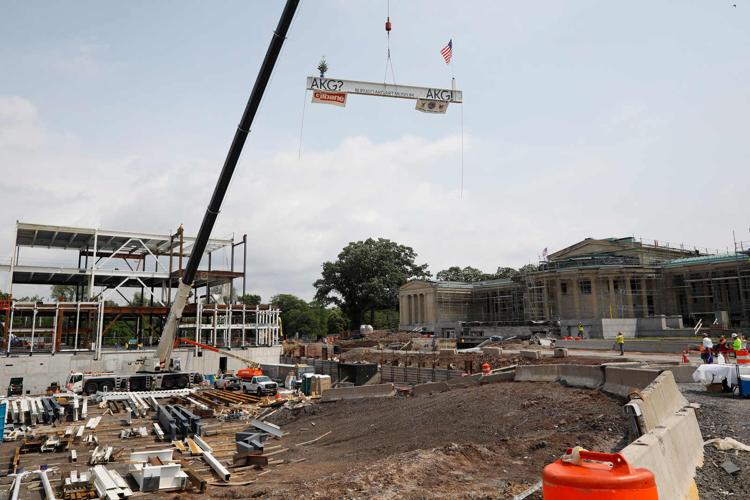 The final steel beam is lifted into place atop the Albright-Knox's new Jeffrey E. Gundlach Building, which is under construction amid the gallery's AK360 campus expansion, during a topping out ceremony to mark the completion of the steel frame, Wednesday, July 7, 2021.

Workers carefully affix the rigging to the final steel beam before it is lifted to the top of the Albright-Knox's new Jeffrey E. Gundlach Building during a topping out ceremony to mark the completion of the steel frame, Wednesday, July 7, 2021.

Shohei Shigematsu, the lead architect for the AK360 project, center, applauds during the topping out ceremony to mark the completion of the steel frame of the Albright-Knox's new Jeffrey E. Gundlach Building, Wednesday, July 7, 2021. 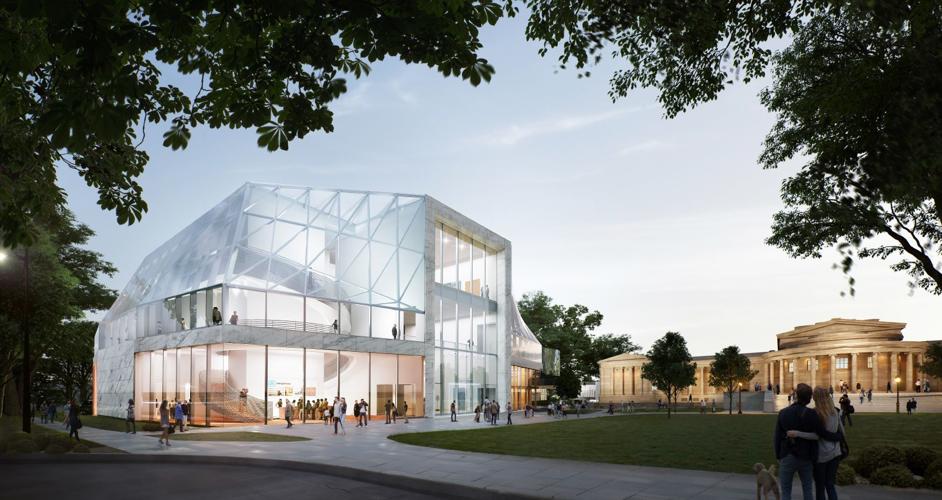 An updated rendering of the new building at the Albright-Knox Art Gallery.