As virus spreads, so does peace and community on Buffalo's East Side
0 comments
Share this
Support this work for $1 a month
1 of 2 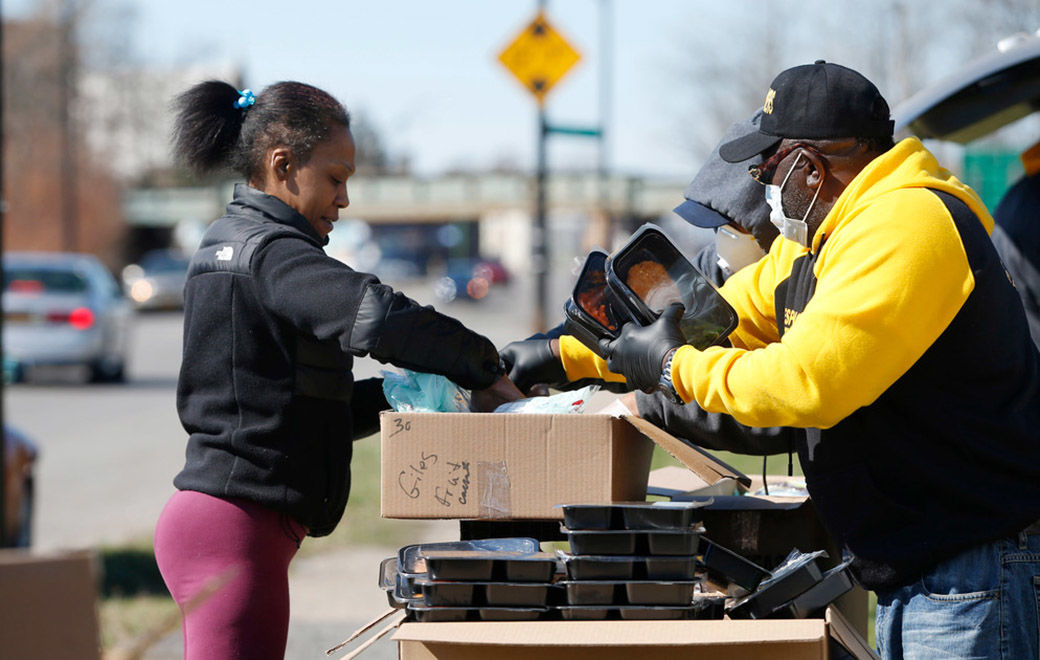 Kim Young, of Buffalo, who was laid off from her job during the Covid-19 outbreak and whose husband's hours were cut, gets free meals for her family Wednesday, April 1, 2020. The meals are being distributed by Buffalo Peacemakers and Stop the Violence every Wednesday at Genesee and Kilhoffer streets. Here, Michael King, left, and Anthony James of the Peacemakers help out. (Sharon Cantillon/Buffalo News) 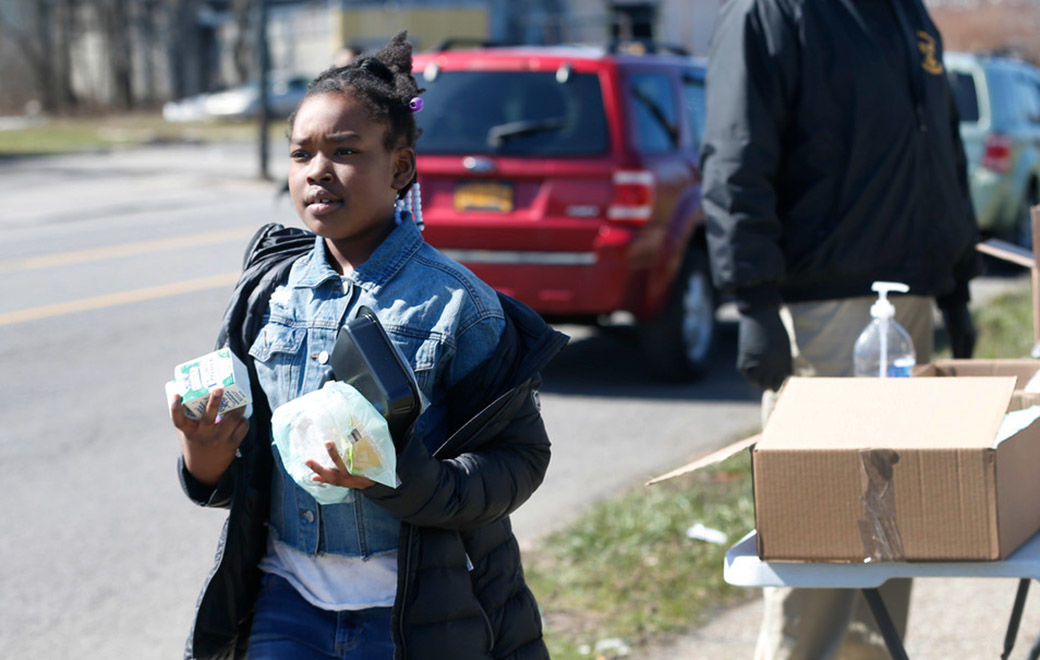 Andrae Colvin-Wilson, 8, came with her brother and mother to get free breakfast and lunch distributed by Buffalo anti-violence groups on Wednesday, April 1, 2020 . Buffalo Peacemakers and Stop the Violence have been doing a food giveaway every Wednesday Genesee Street at Kilhoffer Street on Buffalo's east side during the Covid-19 pandemic. (Sharon Cantillon/Buffalo News)

A group of teenage boys wandered over to a buffet table laden with prepackaged breakfasts and takeout containers of spaghetti and meatballs on a vacant lot at Genesee and Kilhoffer streets. They each grabbed a couple of cartons of grape juice.

"It's awful," Jacob Jackson, 15, a student at International Preparatory School at Grover Cleveland, said Wednesday. Social distancing has been tough for young people like him, he said, and the school work that was sent home has been confusing.

"We don't know how to do it," he said. And then he left with his juice and his friends.

Murray Holman, executive director of the Stop the Violence Coalition and a member of Buffalo Peacemakers, and one of his partners, Kenneth "Blue" Stephens, spend much of their time and energy steering young people away from trouble.

But these days, with the city virtually shut down, the streets of the East Side of Buffalo have been mercifully peaceful.

So instead of stopping the violence, now they're focusing on feeding the people.

Every Wednesday, Holman, Stephens and other members of Stop the Violence and the Peacemakers, have been giving away free food.

They collect packages of breakfast food and lunches from Buffalo Public Schools, which have been distributing free meals twice a week across the city, and from other groups donating food to the hungry. On April 1, they also had takeout meals made by local restaurants through the stockthefreezer.com initiative.

"We're taking it to the people," Holman said. The giveaways are taking place around the corner of what would have been the new headquarters for Stop the Violence, the Peacemakers, SNUG and Back to Basics Ministries. It was burned down in an arson in January. They hope to rebuild it.

In the meantime, with so many people laid off and children at home with nowhere to go, Holman and his fellow Peacemakers are doing what they can to make sure people in the community have food on their tables.

"Come on out!" beckoned Mary Martin, a Peacemaker, on Facebook Live. "We're at Genesee and Kilhoffer. Bring a bag!"

Kim Young pulled over in her van when she saw the volunteers and the tables.

A mother of four, she lost her job as a busser at the Original Pancake House in Williamsville. Her husband's work hours have been reduced. They've gone through their emergency savings of $500 in a week and a half.

Young said she just started getting unemployment and she'll get food stamps starting this weekend. So she was glad to find the food donations Wednesday.

"I just saw this by the grace of God," she said.

Another mother, Tasha Coleman, stopped by to pick up food for her two daughters. As a home health care aide, she must continue to work. "A lot of us feel we shouldn't," she said.

She carried home some spaghetti and bagged apples. "It's healthy," she said. "Everything matters."

Andrae Colvin-Wilson, 8, came with her brother and mother. "Yay!" she squealed when she saw the selection of breakfasts and lunches.

"I miss school," she said. "I miss my teacher, Mrs. Jakubowski."

A steady stream of people came to the table Wednesday. A woman asked if they were taking donations. "No, no," Holman said, and he encouraged her to take some food. A man with a giant bag of cat food draped over the handlebars of his bike stopped by, too. Another man just asked for a squirt of hand sanitizer.

At moments it was tricky to keep people from crowding around the food.

"Back'em up!" Holman bellowed in his baritone that in the past would come in handy while scolding troublemakers.

Crime in the city hasn't stopped completely. There were four homicides in the past week, all on the West Side.

But for now at least, the East Side hasn't seen the kind of street violence it too often does, despite a shooting near Schiller Park on Sunday afternoon that left a man with a non-life-threatening leg wound. Holman thinks the quiet on the East Side comes from people having to face a common foe together instead of each other.

Kim Young, of Buffalo, who was laid off from her job during the Covid-19 outbreak and whose husband's hours were cut, gets free meals for her family Wednesday, April 1, 2020. The meals are being distributed by Buffalo Peacemakers and Stop the Violence every Wednesday at Genesee and Kilhoffer streets. Here, Michael King, left, and Anthony James of the Peacemakers help out. (Sharon Cantillon/Buffalo News)

Andrae Colvin-Wilson, 8, came with her brother and mother to get free breakfast and lunch distributed by Buffalo anti-violence groups on Wednesday, April 1, 2020 . Buffalo Peacemakers and Stop the Violence have been doing a food giveaway every Wednesday Genesee Street at Kilhoffer Street on Buffalo's east side during the Covid-19 pandemic. (Sharon Cantillon/Buffalo News)