As sections of rail trail open in Southtowns, residents seem to love it or hate it
0 comments
Share this 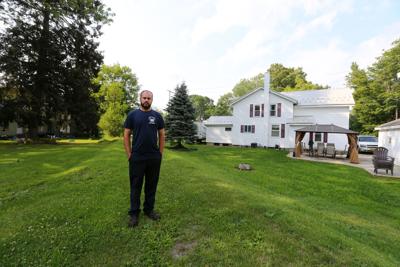 Trains used to rumble down the tracks in the middle of Scott Wohlhueter's backyard in Colden, and he'd rather have a train than a trail there.

But in Orchard Park, Victoria Meister can't wait until the trail at the edge of her property connects with the Village of Orchard Park.

Both live next to the old Buffalo & Pittsburgh Railroad, which is being developed into the Erie Cattaraugus Rail Trail, a 27-mile route extending from Orchard Park to Ashford in Cattaraugus County along the old rail bed.

The railroad gave the trail group a 49-year lease three years ago, with the ability to extend it for another 50 years. Railroad ties and rails were removed from most of the trail in 2010.

"We are opening sections as we can, based on the current condition of each section and available funding. The pandemic has accelerated some of these openings as local residents have been venturing outside more in search of nature and exercise," Deborah Fenn, president of Erie Cattaraugus Rail Trail, said in an email.

Wohlhueter grew up in Colden, and when he and his wife bought their house on Lower East Hill Road in December, they knew about the trail, which has not yet officially opened.

"I knew there was talk, but I didn't expect it to be progressing as fast as it is," Wohlhueter said.

The rail right of way is 15 feet off the corner of his house, he said, and it cuts the property in half.

He mows the grass on the trail, which grows on a 3-foot-high section where the tracks stood.

He said the former owner of the property said trains could shake the pictures off the wall when they went through. But Wohlhueter thinks that would be better than people walking down the trail.

Orchard Park section the most recent to open

The 1.7-mile Pop Warner section in Springville opened in 2016, and 3.5 miles of unimproved trail from Springville to Sibley Road in East Concord opened in the summer of 2019.

The 2-mile Orchard Park section opened last August for limited local use, as there is no parking available at the entrances on Jewett Holmwood and Ellicott roads. There are plans to improve the Orchard Park and East Concord sections.

Some neighbors formed a group to fight the Orchard Park section, but not everyone is opposed to it.

Meister has lived on Scattertree Lane in Orchard Park for four years. She said she and her husband heard about the trail before they bought the house and thought it was a great idea.

"I want to see nature and the beautiful surroundings we have in Western New York," she said. "It's a great place for families to walk safely."

She wants to be able to use the trail to walk from her home off South Freeman Road to the Village of Orchard Park, but that section is not open yet.

Meister said there is a fence on her property because of the family dog, but she is not concerned about lack of privacy or vandalism.

"Who is coming to Orchard Park to cause a ruckus on our trail?" she said. "If someone is having dinner, I don't think anyone's looking to stop and stare in your window."

Could be part of larger trail

GObike Buffalo is taking the lead in establishing an 80-mile Southern Tier Trail, with the support of the Wilson Foundation and the Community Foundation for Greater Buffalo. Alta Planning and Design was hired for planning, outreach and development of the trail, which would link to the Genesee Valley Greenway Trail to Rochester.

The feasibility study conducted by Alta Planning and Design estimated it would cost about $34 million to fully develop the 27 miles of the Erie Cattaraugus, including infrastructure improvements to the railbed, culverts, trail heads, parking and developing the Cascade Bridge over Cattaraugus Creek.

Erie Cattaraugus Rail Trail is funded through private donors, and the group is working on getting corporate sponsorships and grants from charitable and philanthropic organizations, Fenn said. The group has raised more than $50,000 for improvements to the Orchard Park section.

When the railroad was being built in the 1880s, Ned Winter's house on Lower East Hill Road in Colden was right where the railway wanted to lay the tracks, so the house was moved, he said. The corner of the house now sits about 1 foot from the right of way, he said.

"If the railroad came through and wanted to put a train in, that would be perfectly fine," said Winter, whose family has owned the property since the Great Depression. "But having an influx of people walking directly by my house isn’t something I would be looking for."

The elevation of the trail is at window level, Winter said. It is not known when this section would open.

"As soon as they do that, everybody will be able to walk by, look through my windows and be able to have a conversation with me," he said.

He said he thought the feasibility study would identify places where the rail trail would not work, like the section near his house.

"This really isn't going to work in this area," Winter said. "The best route would be to take Route 240 and miss this whole area around me."

Fenn said there are a small number of people opposed to the trail. The trail group tries to address all reasonable concerns from neighbors, she said. One property owner was worried people might cut through his property to access the trail, so the group installed signage, and a municipality suggested placing mile markers on the trail, which the group did, she said. Others have asked for expensive capital projects.

She said Alta Planning and Design, which did the feasibility study, shared a number of options for houses that are close to the trail, including plantings, berms and fencing.

"Unfortunately, some residents who have asked for fencing and drainage improvements, are simultaneously asking elected officials and foundations to block all funding for the trail, which is disingenuous, as this is the very funding that we are trying to secure on their behalf to address their requests," Fenn said.

Fenn said there are many supporters and friends of the trail groups in each community who volunteer with trail maintenance and monitoring.

But it's not just neighbors who have issues with the trail.

In Orchard Park, there were 74 people who sent emails or spoke in favor of the trail at a meeting last October, while three opposed the trail. That was the night the Town Board voted 2-1 to oppose the trail until it obtained the consent of adjacent property owners, who had complained to board members. Patrick Keem, who was supervisor at the time, said the Orchard Park section opened without the knowledge of the board or property owners.

Councilman Conor Flynn voted against the resolution, because he said federal law is quite clear that the railbeds are to be preserved for possible use by railroads in the future.

"Historically, this issue has been framed as the town having the authority to either stop the further development of the trail or support its uninhibited growth," Flynn said in a Facebook post explaining his vote. "This is an incorrect framing of the town’s role. The town cannot stop the trail from being developed, even if it wanted to."

That was the third vote by the board on the trail. The first one, in 2008, strongly supported the trail. Then in 2019, citing concerns and unknowns about the trail, the board voted 2-1 in favor of a resolution that said the town maintained interest in the trail, but would take no stand on it until it saw the plans.

Imagine hiking or riding your bicycle from Buffalo to Rochester by going south to Springville, across a scenic 1890s cascade bridge, then onto Salamanca, along the Allegany River to Olean and north to Hinsdale. From there, you link up with the Genesee Valley Greenway Trail to Rochester. That’s the vision of the 80-mile Southern Tier Trail, a multi-use trail

The path to a new Southtowns trail looked smooth. Then things got rocky.

From upscale subdivisions near the beginning of the trail in Orchard Park, to rural landowners in Aurora down to Ashford, many who live next to the proposed trail are against the

The trail links two counties, five towns, two villages and one hamlet – the towns of Orchard Park, Aurora, Colden and Concord, the villages of Orchard Park and Springville and hamlet of West Falls in Erie County and the Town of Ashford in Cattaraugus 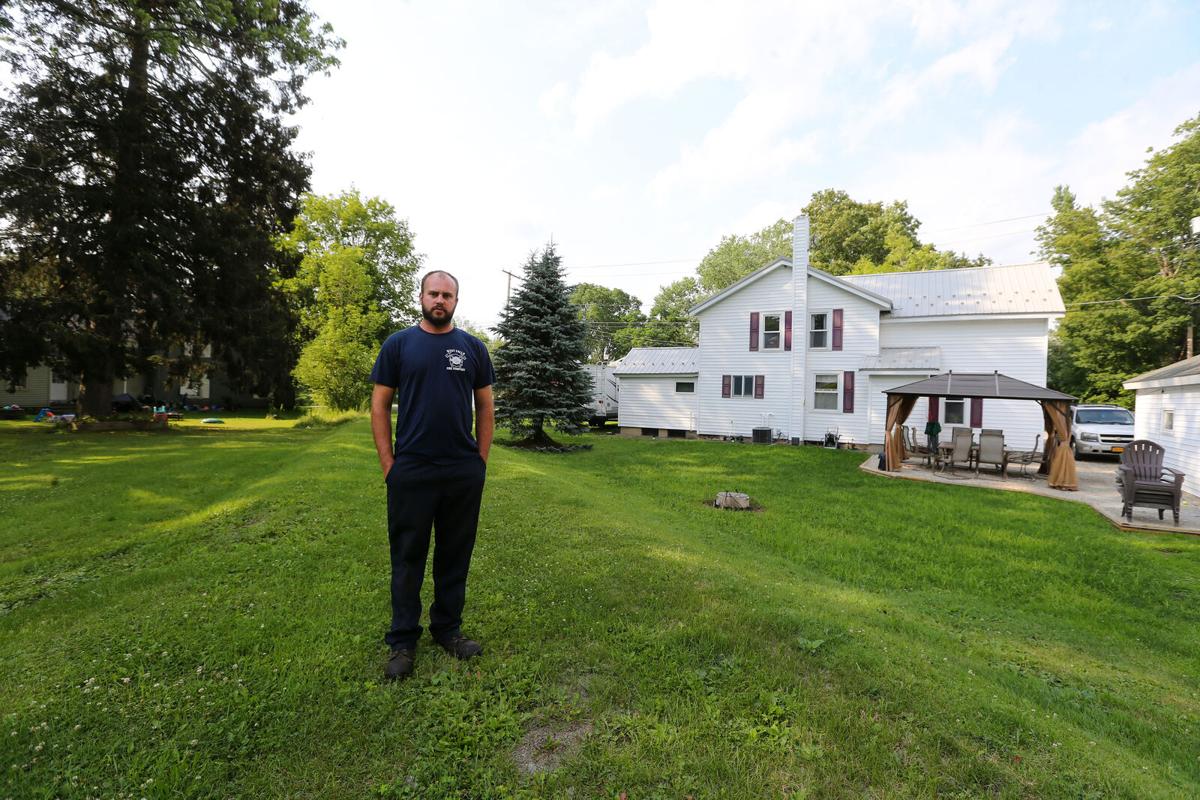 Scott Wohlhueter stands on the Erie Cattaraugus Rail Trail path that cuts through his backyard in Colden on Thursday, July 15, 2021. The trail is built upon an old railroad track on a right of way on his property. 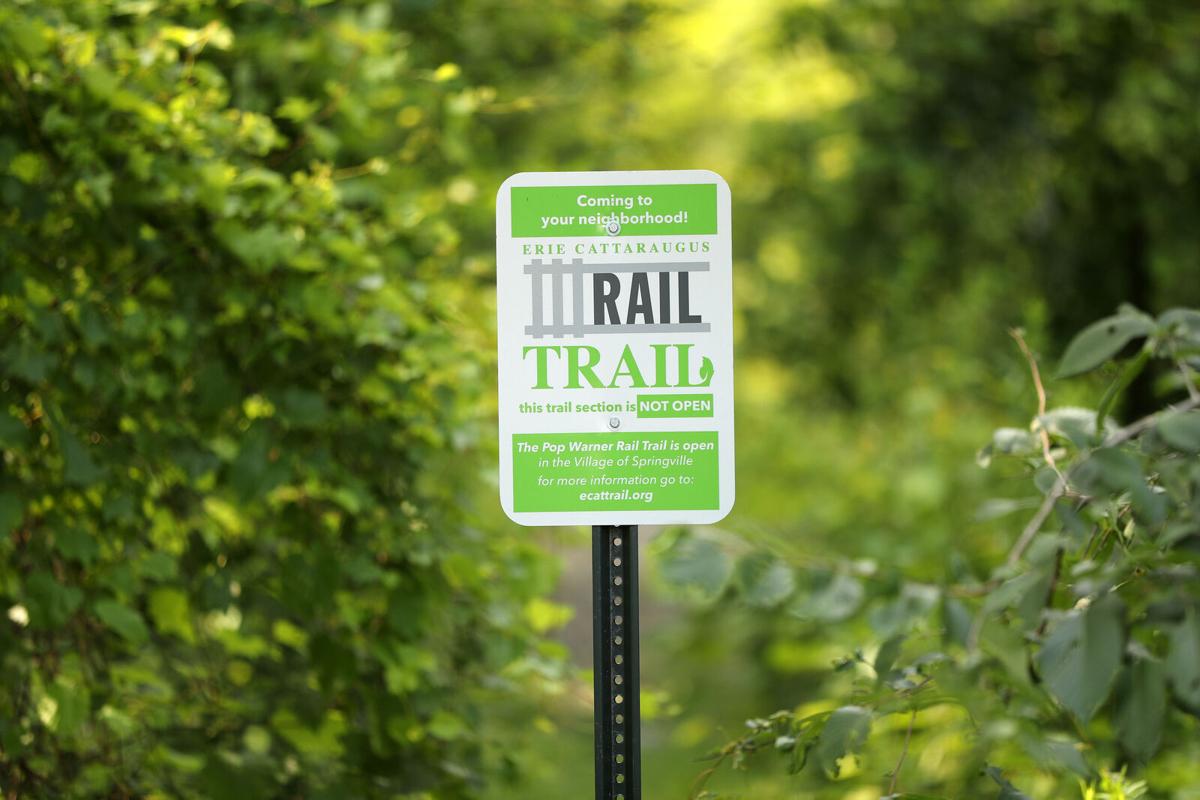 A sign on the Erie Cattaraugus Rail Trail, which passes  through the backyards of some homes in Colden on Thursday, July 15, 2021.