Amid pandemic, flu has virtually disappeared in the US; Pfizer studying 3rd dose to fight variants

Local officials and residents are upset by that, with companies having applied in every county in Western New York to cover thousands of acres of land with solar panels or wind turbines.

They also worry about the water. There would be no local control over proposals to put wind turbines in Lake Erie or Lake Ontario. Environmentalists and developers agree it's only a matter of time before those proposals come.

The law passed in April abolishes siting boards, which included two residents from a community affected by a project. A new state agency, the Office of Renewable Energy Siting, will rule on renewable energy applications – keeping in mind the target established in a 2019 state law that 70% of the state's electricity must come from renewable sources by 2030. The law also bans 100% of carbon emissions from power production by 2040.

Public comment must be sought and local governments can say whether a project complies with local laws, but the new state law says any local law can be overridden if the new office considers it "unreasonably burdensome in view of the targets and the environmental benefits of the proposed major renewable energy facility."

And the law says if the new office doesn't make a ruling within one year of the completion of an application, the project's permit "shall be deemed to have been automatically granted."

"I think it takes even more rights away from the communities than the little bit that they had," said Newfane Supervisor Timothy R. Horanburg, whose town is included in the site of a proposed 2,000-acre solar project.

"Just because public comments are allowed doesn't mean they're going to be taken into consideration," said Pamela Atwater, head of Save Ontario Shores, a citizen group that battled a wind power project in Somerset and Yates for five years.

"There is no public involvement plan, there’s no preliminary scoping statement, which is a point where the applicant would describe the project and some of the details relating to it. There is no requirement for an evidentiary hearing, which is very significant, because that was an opportunity for experts to be called who would speak to specific issues with the project," Atwater said.

Cambria Supervisor Wright H. Ellis said the burden shifts to the municipality to show its law is not unreasonable, and there is no board to vote on that issue.

The new law sets aside Article 10 of the Public Service Law, unless a developer who has already applied wants to stick with the old process. Get ready to hear developers and opponents argue over the faster process in Article 94-C of the Executive Law.

“Things weren’t happening under Article 10, so they just made it easier for (developers) to do it," Horanburg said.

Ellen Banks, conservation chair of the Sierra Club's Atlantic Chapter, disputed the notion that the public has lost its chance for input on proposed projects.

"I know that people who are opposed to renewable energy say there’s not much of a voice, but if you read the bill, which was passed in the short session this spring, there still is," Banks said.

“One thing the opposition almost never talks about is, what is their alternative? Is it to keep burning stuff and poisoning our atmosphere forever?" Banks asked. "Their answer to that is usually, ‘You can put solar panels on your house.’ Which is great, but it’s just not enough to replace fossil fuel burning.”

Turbines in the lakes?

The state plans a feasibility study on offshore wind power, followed by a bidding process for the right to construct such a project.

"A New York State Great Lakes Wind Feasibility Study would provide a broad assessment that considers wind energy development in Lake Erie and Lake Ontario through a framework that is sensitive to environmental, maritime, economic, and social issues while considering market barriers and costs," said a white paper issued in June by two state agencies.

Diamond already has done preliminary research on sites in Lake Erie off the shores of southern Erie County.

"We have found no deal-killers in the lake," Wissemann said.

"I'm not in favor of wind turbines in the lake," Evans Supervisor Mary K. Hosler said.

But there would be no local control at all over a wind project in Lake Erie, local officials, environmentalists and developers agree. All the decisions would be made in Albany.

"Any say that the town has ends 1,500 feet off the shoreline," Hosler said. "We don’t really have jurisdiction there, but our community is a lakefront community."

Yard signs have appeared along Route 5 opposing the yet-to-be-disclosed project.

"It's in anticipation of what might be coming down the road," Hamburg Supervisor James M. Shaw said. "There's a lot of angst."

"That’s why you see these signs popping up, because this is really a grassroots effort. These energy companies are lobbying hard in Albany," Hosler said.

There's no way to meet the state's targets without large-scale wind and solar projects, proponents say.

"The goal for the next few decades would require almost as much power plant construction as the entire 20th century – since Edison and Tesla commercialized electricity," Wissemann said.

It's already clear that one of the major issues cited by critics will be whether construction on the lake bottom will stir up contaminated sediment and endanger the safety of the region's drinking water.

The state Department of Environmental Conservation said it has never studied the issue.

“The lakes were very, very polluted and a lot has been done to restore them. That could be undone very easily," Atwater of Save Ontario Shores said.

"The idea of stirring up toxins, there’s no evidence to support that," said Banks of the Sierra Club. "The method of construction is such that there would be minimal disruption to the lake bed."

She said the turbines probably would be anchored in concrete slabs laid on the lake bed, although Wissemann said underwater cable would be needed to take the electricity to the power grid.

Banks said opponents shouldn't look at the turbines at the old Bethlehem Steel plant in Lackawanna as a precedent.

"People look at our Steel Winds project and from certain camera angles it looks like they’re sitting on the beach. Well, they are. But offshore wind would be miles out into the water," Banks said. "I wouldn’t want 100 of them, but spread out across the lake, a modest number of them could really replace a lot of filthy gas-burning plants that cause pollution and illness. In reasonable proportions, it would be definitely a good thing."

Mother throws four children out window during fire in Turkey

Mother throws four children out window during fire in Turkey

The Lighthouse Wind project, proposed by Apex Clean Energy, is in limbo.

The new process empowers a newly created state agency to rule on large-scale wind and solar energy projects within a year after a developer's application is deemed complete.

Citizens Against Wind Turbines in Lake Erie rallied Saturday morning in Chautauqua County against the placement of “industrial sized” wind turbines in the waters of Lake Erie. Leaders of the advocacy group cited environmental, public safety and economic concerns about the prospect of turbines being built in the lake. They were joined at the rally by state Sen. Chris

Solar power companies are beginning to take a more aggressive approach to gain support for their projects, playing up the financial benefits for host communities. EDF Renewables, the San Diego developer pursuing the Ridge View Solar project in Newfane and Hartland, has offered $32 million over 25 years to the towns, the county and the affected school districts. Its

EDF Renewables has filed documents in Albany to begin the process of seeking a permit to put solar panels on 2,500 acres – equivalent to 1,890 football fields – in southern Erie

Environmentalists are weighing the potential risks, including collateral damage to birds, bats and fish, against the benefits of harnessing wind

There is no formal proposal to install wind turbines in Lake Erie waters off Western New York. But nearly 100 people showed up at an Erie County Legislature meeting on Thursday anticipating or fearing that day is coming soon. Clean energy advocates pressed legislators to be open-minded about wind energy use. Though there are currently no freshwater wind farms 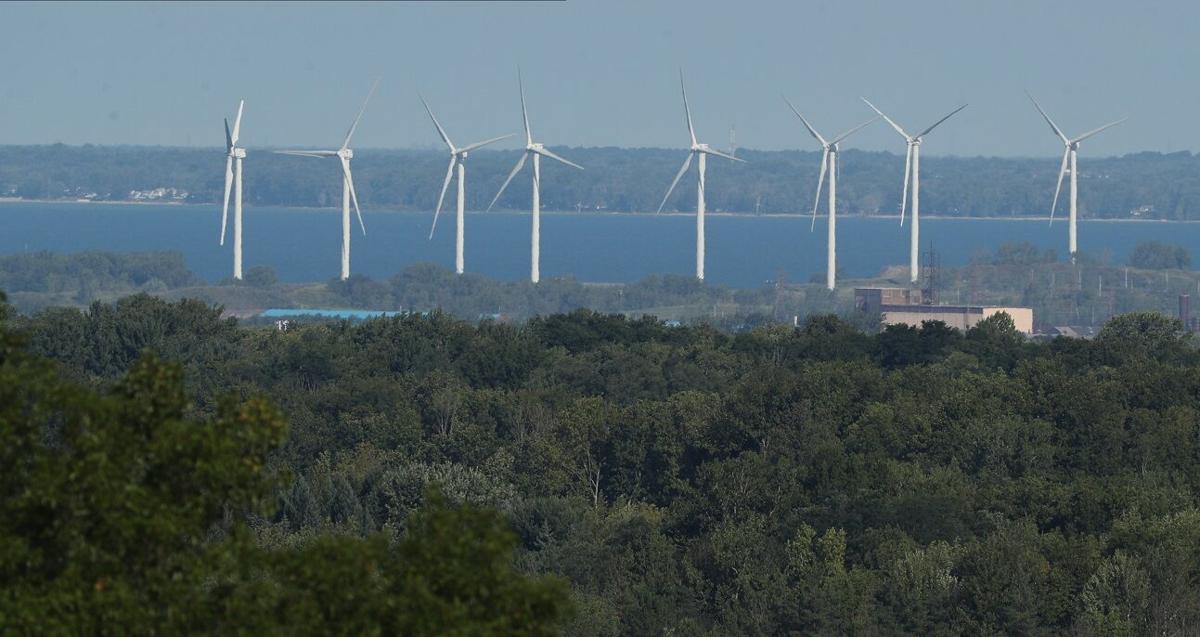 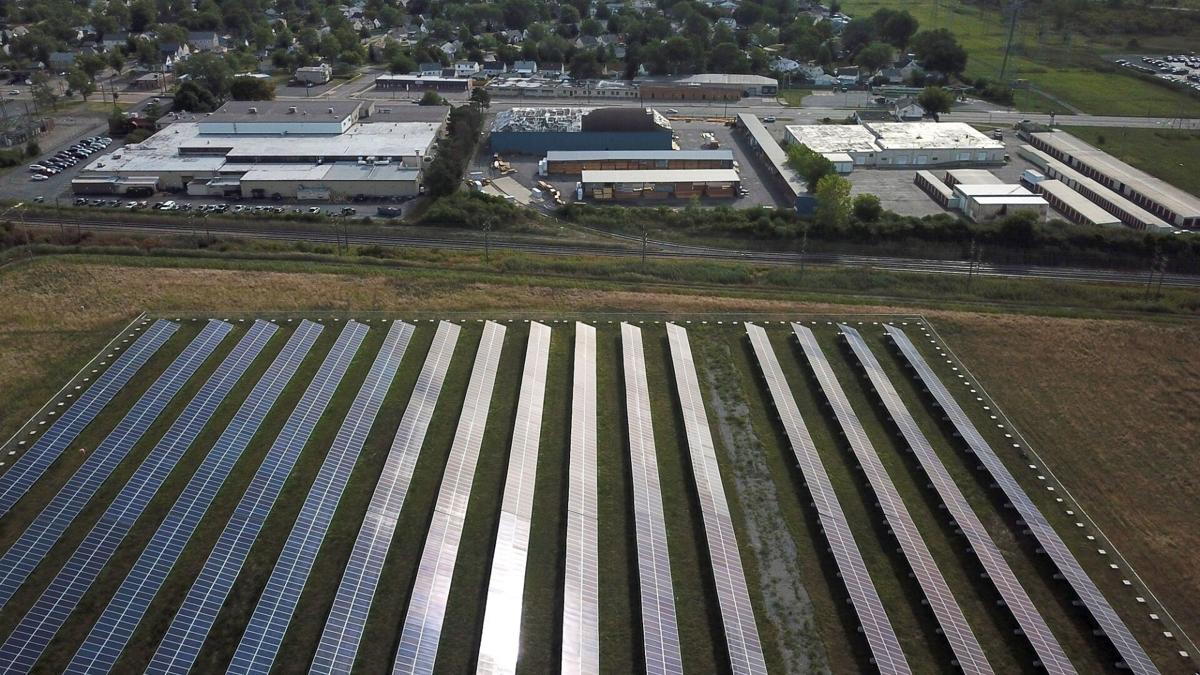 Solar panel array between Two Mile Creek Road and Millitary Road with the I-290 to the south in Town of Tonawanda. 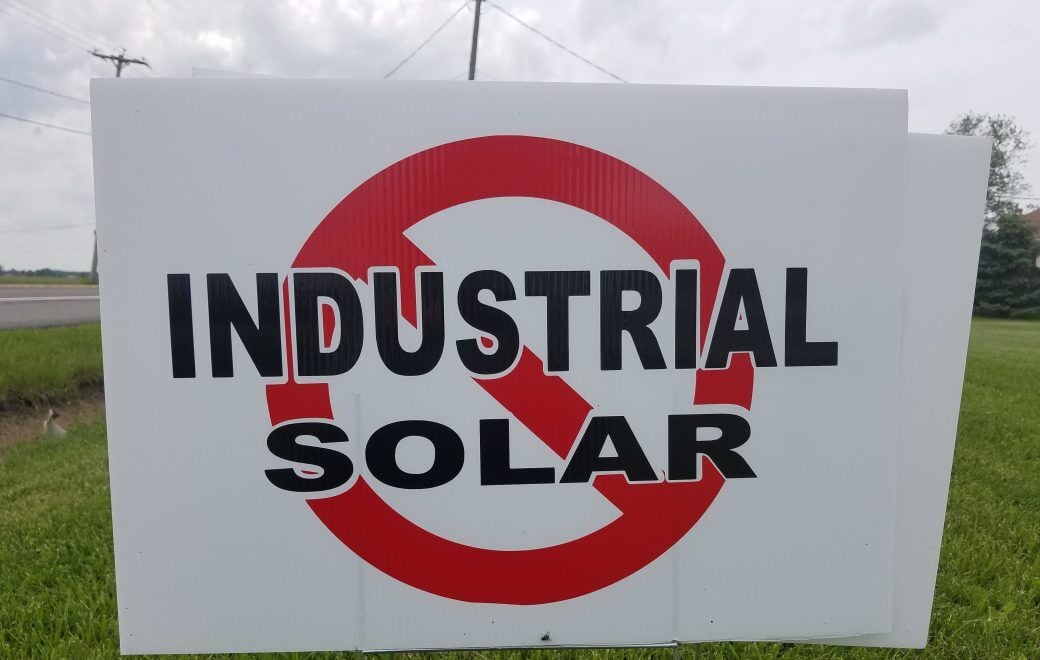 A yard sign opposing the Bear Ridge Solar project on a lawn in Cambria on June 19, 2019. (Thomas J. Prohaska/Buffalo News)