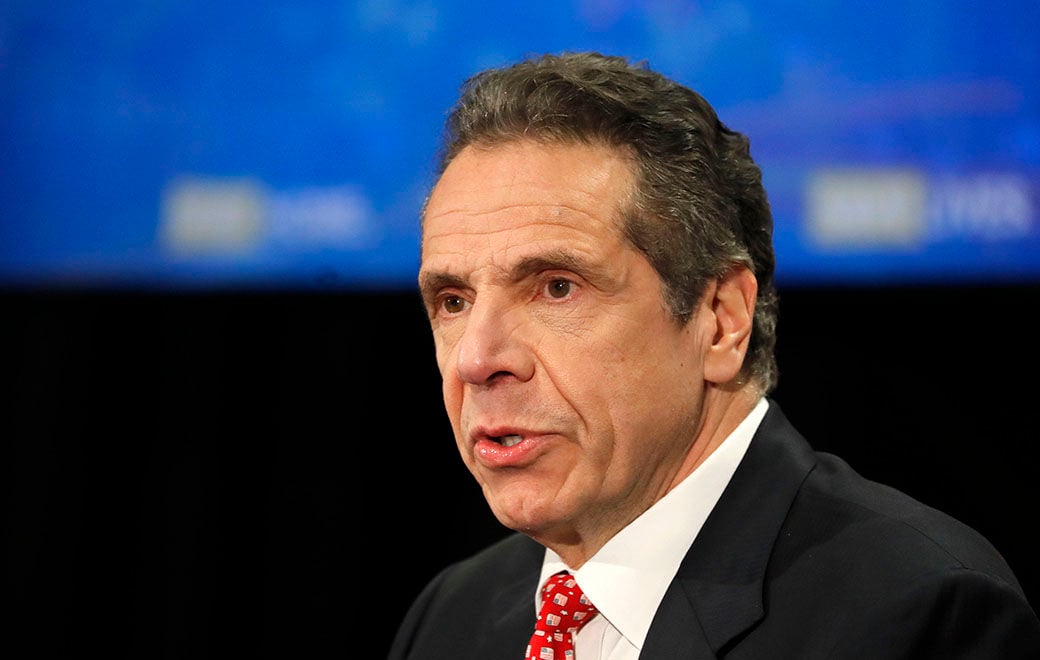 A lawsuit accuses Gov. Andrew Cuomo of overstepping his powers in responding to the Covid-19 pandemic. (Mark Mulville/News file photo)

ALBANY – Four weeks after a new state budget was put in place and at a time when they are crafting their own tax and spend plans, 700 school districts across New York State still have no idea how much state aid they are getting from Albany – a make-or-break funding source for schools.

But they are certain of something: Money is about to fall off the table in advance of the Cuomo administration giving its first specific peek sometime next month just how much the state will reduce vital aid to all local government entities, including schools.

How dire is it?

With Gov. Andrew M. Cuomo proposing a possible 20% cut in state aid to schools – an idea that surfaced for real over the weekend less than four weeks into the state’s new fiscal year – the New York State School Boards Association said Monday that districts statewide could be forced to cut a range of student programs and lay off tens of thousands of staff.

“The quality of public education in all of our communities – urban, suburban and rural – is at stake," said the education group.

On Monday, the group joined Cuomo and others in making a clear plea: Washington needs to step in with a bailout – on top of those for everything from unemployment benefit payments to small businesses and health care – that this time is directed in unrestricted money for states and localities, like schools, to use to balance their red-ink budgets. But that is no sure thing and, even if aid flows directly to the state government, no one knows how much Albany will try to keep for itself or share with local governments.

“We must begin to fully grasp the reality of what a draconic, three-tiered budget scenario for 2020-21 looks like: A: survivable; B: devastating; and, C: unrecoverable," wrote Buffalo Superintendent Kriner Cash in an email to the district’s board and his top staff last Thursday.

The letter, written before Cuomo’s budget office warning Saturday evening, said that any further cuts in revenues by Cuomo or the federal governor “will cast us into the devastating or unrecoverable” scenarios.

Over the weekend, the Cuomo administration released a gloomy assessment of just how bad things are in the new fiscal year that began April 1.

Schools, especially reliant on Albany, will feel considerable pain. State Comptroller Thomas DiNapoli last week noted that school districts outside New York City rely on the state for an average of 38% of their annual revenues; many get 60% or more and some, like Buffalo, rely on the state for more than 80% of their school funding, district officials said.

The Cuomo administration on Saturday released its legally required financial plan for the new state budget, and it showed revenues will come in more than $13 billion below projections. As a result, Cuomo said state aid to localities – schools, counties, cities, others – can expect cuts in the range of 20%. That will not be known until mid-May.

Schools face a July 1 fiscal year start for their budgets. Most, except large districts like Buffalo, have residents vote on the budgets. That was to occur May 19 this year, but that date has been pushed back until at least June 1. Assuming an actual vote by residents does occur this year, officials say it will take 30 to 45 days once a state aid number is released by Cuomo in order for districts to hold voting.

“At this stage, it’s just an exercise in trying to evaluate options," Robert Lowry, deputy director of the New York State Council of School Superintendents, said of districts’ attempt to plan budgets without a core set of state numbers known yet.

The state budget approved earlier this month in Albany contained $27.9 billion in aid to public school districts. That included a $1.1 billion cut in state funding, which was offset by the same amount in a special federal stimulus bailout measure passed in the early days of the pandemic.

Special powers given to Cuomo by lawmakers allow him to cut as he wishes during the fiscal year, though lawmakers could return to Albany and make changes to his ideas during a brief, 10-day window.

A top legislative leader did not rule out tax hikes – such as on wealthy New Yorkers that Cuomo rejected in March – to try to stave off deep budget cuts.

“We certainly do not want to balance our budgets on the most vulnerable. We don’t want to balance budgets on our students, on our already hard-hit communities, our middle class … I think everything has to be looked at," Senate Majority Leader Andrea Stewart-Cousins, a Westchester Democrat, said Monday on WCNY’s "The Capitol Pressroom" radio show on Monday.

In a private phone conference with Senate Democrats last week, Stewart-Cousins discussed the idea of hiking state income taxes on millionaires in New York and has directed lawmakers to consider possible revenue sources that could be on the table when the Legislature returns in the weeks ahead to Albany, sources said Monday.

In a statement to The Buffalo News, Assembly Speaker Carl Heastie, a Bronx Democrat, said the federal government has to "step up because from a human perspective these cuts would be devastating and unacceptable and certainly not in line with New York's spirit and values.''

The first “measurement period” for Cuomo to consider amending the budget is April 30; that takes into account the first 30 days’ worth of tax and other revenues in the new fiscal year.

With Cuomo’s new powers, the school superintendents’ association has been warning school leaders since the end of March not to make firm spending plans based on state aid included in the new budget passed several weeks ago. Cuomo and lawmakers resisted some calls to delay adoption of a state budget – or to do it in phases – until the Covid-19 economic picture became clearer.

Some school districts would like local budget voting day to be held on June 9 – though exactly how it will be done safely with social distancing rules or recommendations is not entirely sure. But if the state aid number isn’t known until mid-May, Lowry said it will be difficult for districts to meet various advance requirements – such as holding public hearings – to be able to have a vote on June 9.

Besides not knowing when shuttered schools will reopen, districts are facing unprecedented financial pain.

Consider if state aid is held flat, which in practice results on a local level cut because of various contractual increases, such as teachers salaries. A flat state aid situation would generally lead to some staff vacancies left vacant or cuts in equipment purchases and the like.

Now, consider a double-digit state aid cut. Albert said such a scenario could result in larger class sizes because of fewer teachers, cuts in elective courses such as AP or music and arts, as well as after-school programs and sports. Beyond teachers, losing jobs would be administrators, counselors, bus drivers.

At the Cleveland Hill school district in Cheektowaga, Superintendent Jon MacSwan on Monday noted that the district’s board last week adopted a budget for the fiscal year starting July 1.

If there is a mantra for school leaders like MacSwan for these times, it is: flexibility. And, perhaps, growing fear.

“This is something that’s going to be a moving target right through January next year," he said of the district’s finances. Sixty percent of the district’s annual revenues come from Albany. The preliminary budget the board adopted represents “a ceiling” for spending in the coming school year, he said.

With no school leader knowing what Cuomo might do in terms of state school aid, all they can do is ponder what his 20% cut to education actually means. If Cleveland Hill, as just one local example, saw a 20% state aid cut: “There will be significant staffing and program cuts across the board," MacSwan said.

He cautioned that there are no specific cuts in mind yet, but that a major reduction in state aid could end up increasing class sizes, reducing staff and paring back services offered at a district-run family resource center that provides everything from counseling for students and their families to efforts to get some parents more involved in their children’s education.

“Everything and anything would have to be considered," he warned Monday.

There is some precedent for what happens when the state pulls back on aid to schools. The state school boards association said the job losses in the immediate years after the Great Recession in 2008 totaled more than 20,000 positions statewide – hitting slots for teachers, psychologists, counselors and administrators through a combination of early retirements, layoffs and attrition.

Robert Mujica, Cuomo’s budget director, released a report Saturday that showed the economic hit from Covid-19 will be deeper and longer lasting than the Great Recession or the 2001 terrorist attacks. The report was done by the Boston Consulting Group; it was done pro bono, though the firm on April 4 was paid $795,000 by Mujica’s office for an unrelated consulting job.

For now, the Cuomo administration is clearly trying to put the onus on Washington for a stimulus measure directed at states and localities. “In the absence of federal aid, we will have no choice but to move forward with these devastating and unprecedented reductions," Mujica said over the weekend about $8.2 billion proposed in state aid to localities, including schools.

A lawsuit accuses Gov. Andrew Cuomo of overstepping his powers in responding to the Covid-19 pandemic. (Mark Mulville/News file photo)