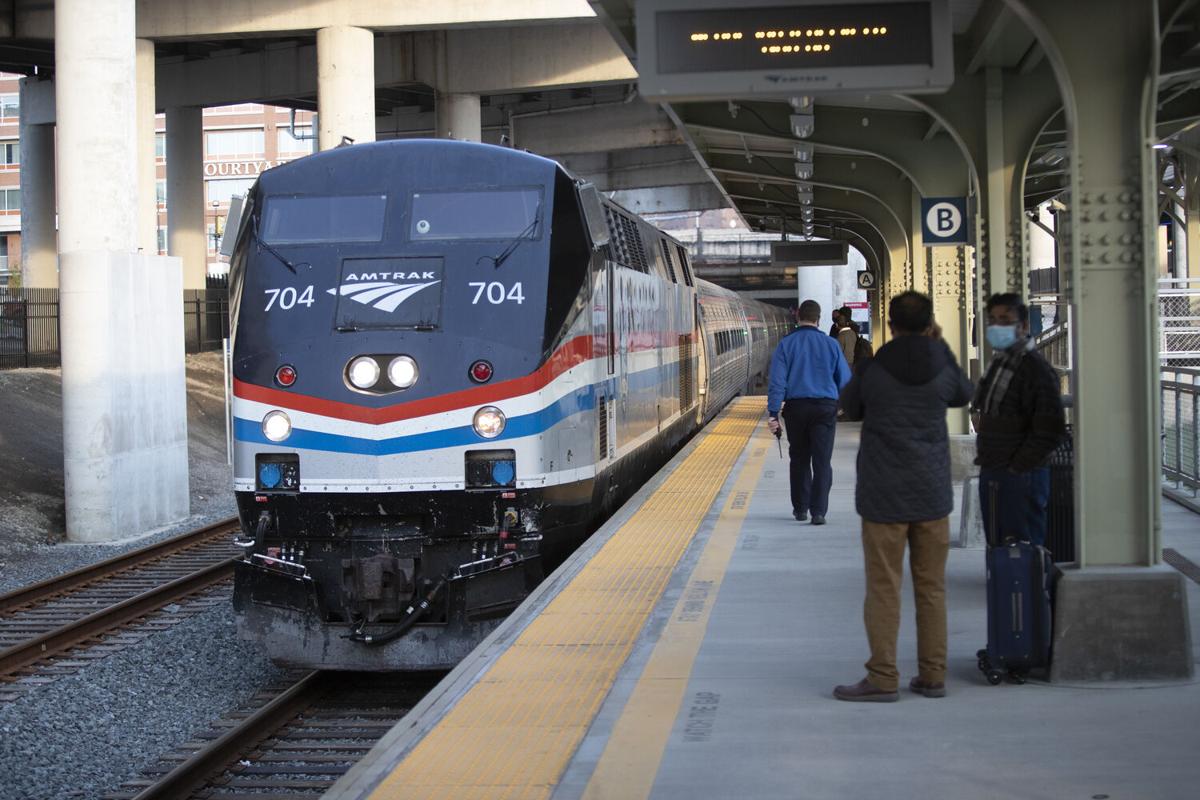 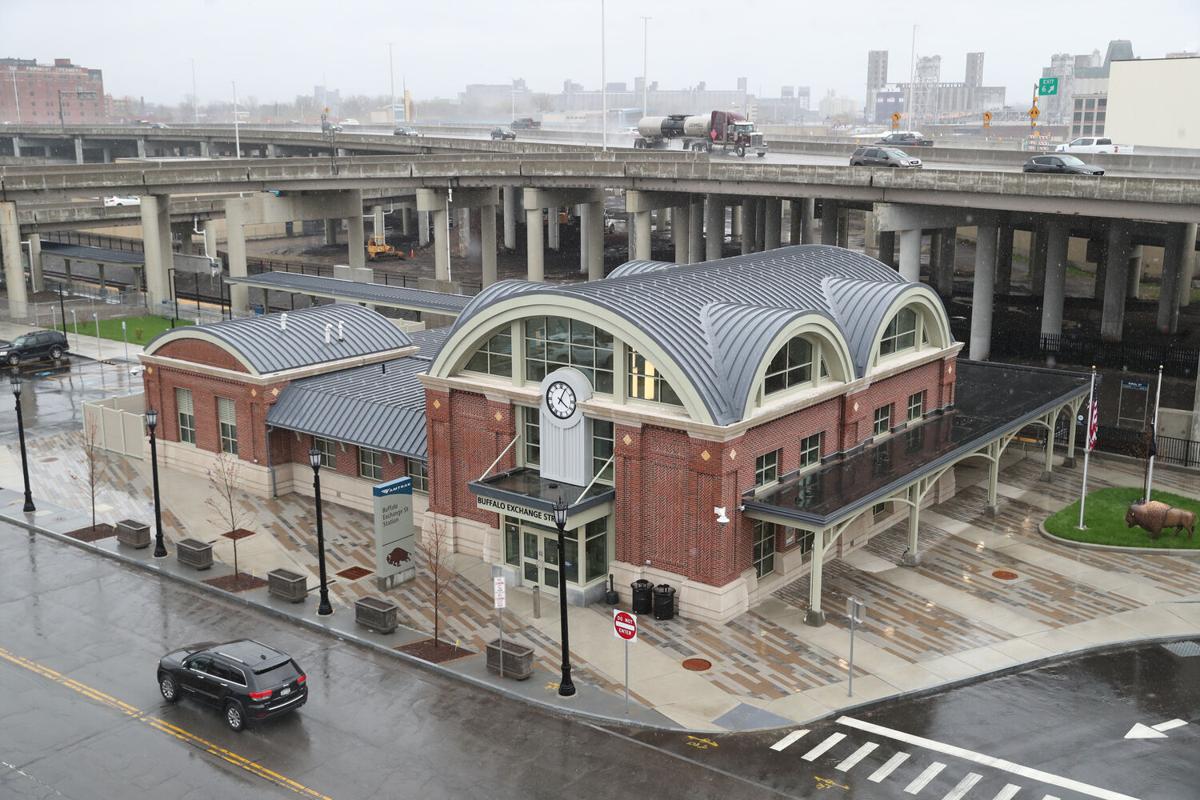 The Buffalo Exchange Street Station is south of Sahlen Field and within walking distance of Niagara Square and Canalside.

But an oft-delayed, 11-year high-speed rail study by the state Department of Transportation isn't due to be completed until spring 2022. Without the study, passenger train advocates fear New York State won't be able to take full advantage of the geyser of rail dollars expected later this year.

Their frustration comes as they watch Gov. Andrew M. Cuomo push along other projects.

"When you get to the capital and go west by rail, it is an absolute embarrassment," Kennedy said. "No one is going to use what should be very convenient and dependable and reliable rail service when it is none of the above."

Kennedy introduced legislation this month calling for a commission to study high-speed rail and a hyperloop, a futuristic transportation concept of Elon Musk's, but he still wants the DOT to complete the environmental impact statement for high-speed rail.

"The DOT absolutely needs to get the EIS finished," Kennedy said. "It should have been done a long time ago."

Others are not as worried about missing out on funding.

Epstein said not having a completed study hasn't kept federal funds from a number of statewide rail projects. That includes constructing a double track from Albany to Schenectady to alleviate a major bottleneck, as well as building new train stations in Buffalo, Niagara Falls and Rochester.

"These completed projects will leverage benefits from additional funding for rail under Biden's American Jobs Plan," Epstein said. "There is nothing in the plan that would preclude New York from benefitting from increased federal investment in passenger rail corridors."

But a state official with knowledge of the process said New York State would be in a much better position if the study was finished, especially for a hoped-for, large-scale project.

"It doesn't take you out of the mix for funding, and I think the Empire Corridor under a Biden administration probably gets something," the official said. "But the reality is it probably has an effect on how much you get. If you are up against a high-speed rail project in North Carolina or on the West Coast, I think the government would rather throw money at a project that's ready to go rather than one that needs further study."

Cuomo has had little to say about wrapping up the study. Instead, in his 2020 State of the State address, he called for convening a panel of engineers to "re-examine and rethink strategies" for bringing high-speed rail to New York.

That was 16 months ago, and the panel has yet to be established.

A DOT spokesman said the department is working with the governor's office to have a panel selected "in the near future."

Biden got the nickname "Amtrak Joe" because he took the train from his home in Delaware to Washington, D.C., over the course of three decades while serving in the Senate.

He's now in the position to make a transformational change in passenger rail service.

Amtrak's 15-year plan calls for addressing a backlog of repairs, providing intercity rail service to 160 communities and expanding service in underserved corridors, especially in the South and Midwest.

The state's top rail priority is an $11.3 billion plan to replace the North River Tunnels, a more than century-old structure damaged by Hurricane Sandy in 2012 that carries 200,000 passengers daily under the Hudson River between New York and New Jersey.

But Western New York stands to benefit regardless of what happens with improvements along the corridor.

The plan includes adding one or two daytime trains between New York City, Buffalo and Cleveland. Currently the only train available to Cleveland departs the Depew Station at 12:20 a.m. and arrives in Cleveland at 3:33 a.m.

Amtrak is also considering a train that would serve Dunkirk; Erie, Pa.; and Ashtabula, Ohio; and more future excursions to Toronto.

The study's stated intent is to bring high-speed passenger rail to the 463-mile Empire Corridor that runs from Penn Station to Niagara Falls Station.

There are two portions of the route in upstate and Western New York – Empire Corridor West, which extends 294 miles from Albany to Buffalo, and the 27-mile Niagara Branch.

The track west of Schenectady to Niagara Falls is owned by CSX, a freight company that operates dozens of freight trains on one of the company's busiest routes in the country. That differs from the track between New York City and Poughkeepsie, which is operated by Metro North, and the track north to Schenectady that's leased to Amtrak.

Amtrak is restricted by CSX to a top speed of 79 mph because the freight carrier says higher speeds would put its own crews at risk. The average speed is 51 mph.

Amtrak trains are also often forced to wait while freight trains get priority. Some can be as long as two miles long, with only a conductor and engineer on board to deal with breakdowns when they occur.

"I've been on so many Amtrak trains where I'm waiting outside of Syracuse or someplace else because a freight train was either broken down or ahead of us, and we had to wait for that to clear," said Hank Olejniczak, a train enthusiast.

The law that set up Amtrak 50 years ago this month stated passenger rail would have priority over freight in return for the private freight railroads giving up the loss on their passenger service and having Amtrak take over.

But changes to the law, Becker said, have weakened that edict.

The Surface Transportation Board, a federal agency that handles disputes between railroad companies, has ruled in a series of cases in recent years that freight carriers have a public responsibility to give Amtrak priority over freight trains, but whether that's actually occurring more often is "the $64,000 question," Becker said.

The high-speed rail study is examining five speed options. They range from 90 mph to 125 mph, with the latter considered at the low end of the "high-speed" category. Trains in Europe and Asia typically travel between 150 mph and 200 mph.

The 125 mph option, which would make the trip from Buffalo to Albany last under two and half hours, would require creating a separate right-of-way costing $14 billion, estimated in 2015 dollars, over twice as expensive as the next costliest alternative. The study gave a completion date of 2035.

The Federal Railroad Administration expects to receive the study from the DOT in July and issue its Record of Decision in spring 2022.

If high-speed rail isn't pursued, the Empire State Passenger Association claims addressing choke points that slow train travel and raising low speeds along the corridor, such as going from 25 to 50 mph, would still have a big impact.

That includes addressing curves that need to be rebuilt or adding a double track where a single track is now shared by Amtrak and CSX, such as between Buffalo and Niagara Falls, Becker said.

Tom DeSantis, a retired city planner in Niagara Falls who played a leading role in the planning and construction of Niagara Falls Station, suspects political reasons for why the study hasn't gotten done after all these years.

"I think that after some of the federal rail money dried up during Obama's presidency, it became the poor stepchild," DeSantis said.

"I think the thinking was: 'Why are we pursuing a project we're just going to be criticized for – there's no money to actually deliver anything within an election cycle?' I think they just made an internal decision not to pursue rail projects."

But DeSantis said the DOT knows projects have to be ready when federal funds become available and should have been prepared.

"They should have been advancing these things so their projects were ready to go," DeSantis added.

State Sen. Sean Ryan is also frustrated over how long the study is taking.

"For years, we have had this never-ending review of the Empire Corridor," he said. "It's been a planning failure not to have concluded the study."

Ryan said the new train stations built along the corridor in recent years are nice, but they aren't enough to boost travelers.

"We built new train stations in Buffalo, Niagara Falls, Rochester and Albany, but what's the use if you don't have reliable rail service?" Ryan said.

Watch now: U.S. to require foreigners entering by land to be fully vaccinated

The Editorial Board: As Biden focuses on improving rail service, State DOT must finish delayed study

While we remain skeptical about a “build it and they will come” approach to the rail service between Niagara Falls and Toronto, there is an ar…

Bring back streetcars to Buffalo? Some lawmakers say yes

The way federal infrastructure dollars will be disbursed could help those seeking to bring streetcars to Western New York.

Despite 'underwhelming' ridership, a call for enhanced Amtrak service to Toronto

An average of only 44 people a day either board or exit the two arriving and two departing passenger trains each day at the Niagara Falls Amtrak station.

Buffalo left behind as other cities get new train stations

The Brown administration and Erie Canal Harbor Development Corp. want a new underground station at Canalside. A station there, officials say, would present a more attractive and safe environment for riders and expand the station’s

The Buffalo Exchange Street Station is south of Sahlen Field and within walking distance of Niagara Square and Canalside.