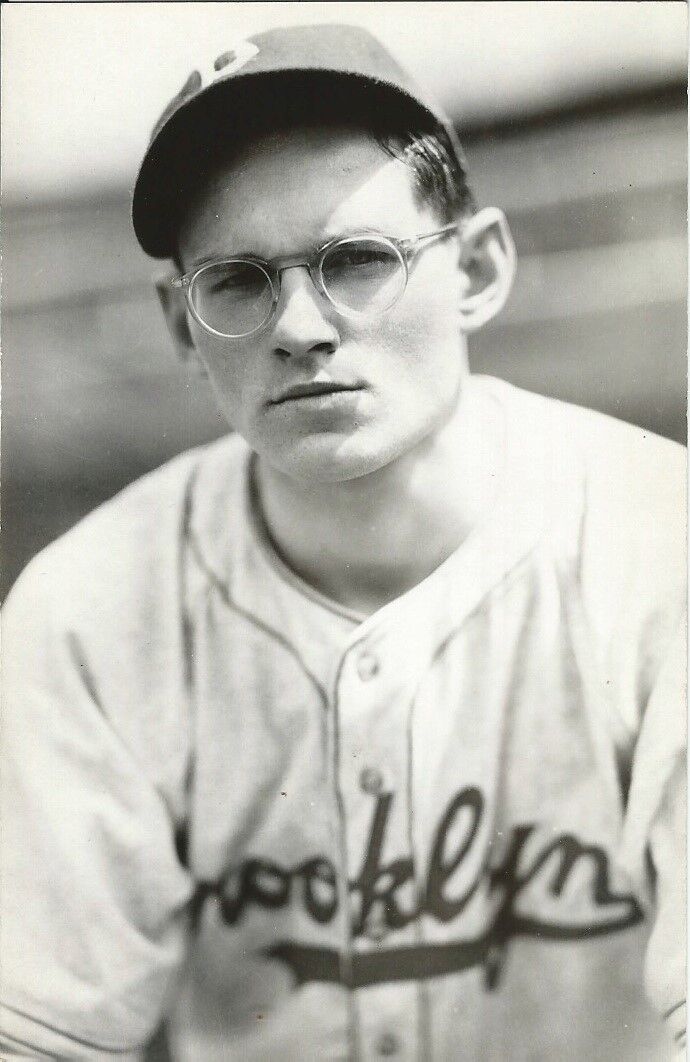 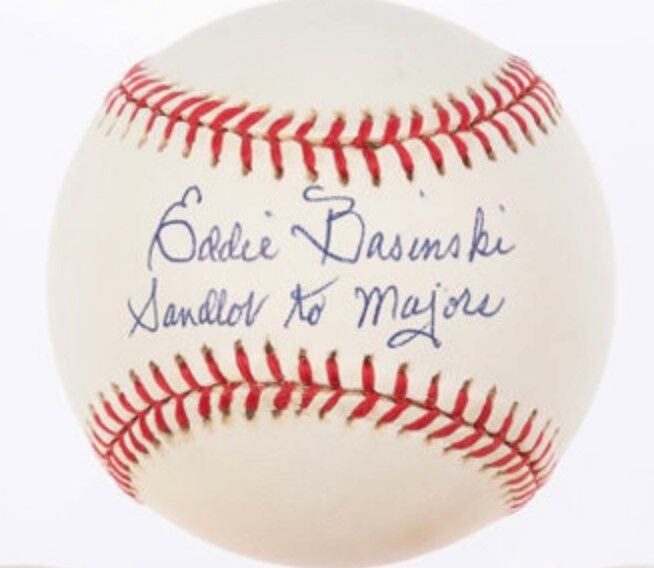 Eddie Basinski holds a unique place in our cultural history. Who else played for the Brooklyn Dodgers – and the Buffalo Philharmonic?

We lost him the other day, at 99. If the name is unfamiliar, even in his native Buffalo, just remember this: Basinski played second base, but never second fiddle.

The end came last Saturday, in Oregon, where he was a legend for his 11 seasons with the Class AAA Portland Beavers. He was, at the time of his death, baseball’s second-oldest former major leaguer (behind George Elder, 100, who played 41 games for the 1949 St. Louis Browns).

What’s more, Basinski is apparently the only modern ballplayer to go directly from sandlot leagues to the major leagues without ever having played baseball in high school, college or the minors. He went from Houghton Park to Ebbets Field, with no stops in between.

This feat was once featured in Ripley’s Believe It or Not, which termed it “a 10 million to 1 shot.”

He played second base and shortstop for the Dodgers beginning in 1944, when many major leaguers were gone to serve in World War II. (Color blindness and poor eyesight kept him out of the draft.) His skill as a classical violinist caught the attention of Dodgers broadcaster Red Barber, who acknowledged his slick infield plays with: “The violin is playing sweetly today.”

Dodgers manager Leo Durocher doubted that Basinski could really be so good on the violin, so they made a bet. Basinski made good by bringing his prized instrument to the clubhouse, where he entertained the Dodgers with selections from Cole Porter, Irving Berlin and Victor Herbert.

Basinski’s biography on the website of the Society for American Baseball Research tells that tale and many others from a remarkable life. It begins with his birth, in Buffalo, as Edwin Frank Basinski on Nov. 4, 1922. His working-class Polish-American family lived on Spann Street, near Clinton.

Basinski had rheumatic fever at age 4. This was the cause of his terrible eyesight – 20-800, by his own account. The steel-rimmed glasses (with Coke-bottle lenses) that he wore in the majors were a part of his public persona. Dodgers president Branch Rickey said they gave him the look of an “escaped divinity student.”

Or a concert violinist. Basinski started on the instrument at age 5 thanks to his mother, Sophie, who played the piano. Basinski was a natural – on the violin and on the ballfield. But his father, Walter, thought baseball was a waste of time, so Eddie Basinski had to sneak off with pals to play. Later he got his father’s grudging approval to try out for the team at East High School, but baseball coach Pop Yerke decided he wasn’t good enough.

Basinski would later say he thought the coach had cut him partly because he wore glasses but mostly because he played violin in the school orchestra. “The music department would be furious” if he had made the team, Basinski figured. That’s when he took to playing serious baseball on his own with a group of friends, who included Warren Spahn, the future Hall of Fame pitcher.

“I had something going for me in baseball,” Basinski once told the author Craig Allen Cleve. “I was quick on my feet. I could leap. I had long arms. I thought this is it for me. There isn’t any other way. For me, it was trying to find some way to gain some sort of recognition, so I wasn’t just one of those Polish punks over there from Kaisertown in Buffalo.”

Basinski played tennis and ran cross-country at the University of Buffalo because it had no baseball team at the time. He was busy outside of school, too: As a freshman, he played violin as last chair for the Buffalo Symphony Orchestra, according to his SABR biography, which says that by his junior year “he had challenged and outplayed 40 other violinists to become a concertmaster.”

(A spokesperson for the Buffalo Philharmonic told me this week that she could not find Basinski on its roster of musicians from that era, but she said the records from that far back are incomplete – particularly when it comes to members who played part time – and it’s entirely possible that he did play in the orchestra.)

Basinski graduated from UB in 1943 with a degree in mechanical engineering and began work at Curtiss-Wright, helping to build warplanes. By then he was also playing shortstop in Buffalo’s top sandlot leagues. Enter Dick Fischer, a baseball scout who owned a local sporting goods store. He had his eye out for major-league talent at a time when some of the game’s greats were serving overseas. And Fischer convinced Rickey to have a team scout come to Buffalo to have a look.

The Dodgers signed Basinski to a contract, and he joined them in 1944, but only so they could evaluate him and decide at what level he should begin in the minors. For two weeks, he took batting practice with the Dodgers and then changed to street clothes to watch games from the stands. Then, on May 20, in Cincinnati, as he was changing out of his uniform, Durocher called out that day’s starting lineup.

“He called, ‘Basinski, shortstop,’ ” his son Dave told The Oregonian newspaper. “And at that moment his life changed forever.”

Basinski hit a triple in his second at bat and handled seven chances at short, throwing one runner out by 10 feet. Durocher called him “Bazooka” for his arm. He earned other nicknames over the years, too, including “The Professor” (for his glasses) and “The Fiddler.”

In Portland they called him “Spider,” for his crouching stance as a fielder. Dave got the same nickname, he told me by phone from Los Angeles, where he is a television director. His father was a lifelong model-train aficionado, Dave said, because as a boy he’d been fascinated by the trains at Buffalo Central Terminal.

Basinski’s major-league career lasted all of 203 games. He played for the Dodgers for parts of the 1944 and 1945 seasons. Then, as many players returned from the war, he spent 1946 in the minors. The Dodgers traded him to the Pittsburgh Pirates in 1947 and he played part of that season for them. Then the Pirates sold his rights to the Portland Beavers – and that, too, is a moment that changed his life forever.

He played 11 seasons in Portland, sometimes performing violin recitals at home plate between games of doubleheaders. He was a good hitter and great infielder who earned places in the halls of fame of the Pacific Coast League and the state of Oregon.

His obituary in the Oregonian this week was written by Samantha Swindler, a reporter who lives in a home that Basinski once owned. She says she sometimes gets letters for him at her address from fans seeking autographs. “Basinski was often included on lists of the greatest Beavers of all time,” she wrote in the obit, “and was once voted by fans as the ‘Most Famous Beaver.’ ”

The Beavers waived Basinski in 1957, when he was 34. Then he played for the Seattle Rainiers under manager Lefty O’Doul, who would give Basinski the hit-and-run sign from the third-base coaching box by playing an invisible violin.

“Hardball on the Home Front: Major League Replacement Players of World War II” is a 2004 book by Craig Allen Cleve that centers on nine lesser-known players, including Basinski, who made their big-league debuts during the war. In the book, Basinski says that he turned down an offer to join the Yankees after the 1947 season so he could stay with the Beavers.

“It was probably a terrible mistake,” he told Cleve. “They won a lot of pennants after that. I would have been part of those great teams and made all that money. A lot of players who are just average players are highlighted because they won pennants.”

Basinski stayed in Portland because he loved the Pacific Northwest. “When I got here I was floored by the beauty,” he once told The Oregonian. “And the people were just great. Buffalo neighborhoods were divided among ethnic groups, and gangs guarded their turf. Somebody who didn’t belong there was beaten up. Back there you’d introduce yourself and … they’d immediately categorize you. That didn’t happen in Portland. It finally dawned on me, and I said, ‘Hey, this is America.’ ”

After baseball, Basinski worked for 31 years as an accounts manager for a truck line in Portland. Dave Basinski says his father was a local celebrity who for decades served as a popular dinner speaker for Kiwanis and other service clubs. Turns out the natural-born ballplayer and violinist was a natural storyteller, too.

Well, sure. But Betty never played for the Dodgers.

Or for the Buffalo Philharmonic.

Erik Brady: Weather was a factor too in only other Bills-Patriots postseason meeting

“The snow-covered gridiron reduced the effectiveness of the power running of (Cookie) Gilchrist,” The New York Times said in its report, “but did not seem to hamper Ron Burton or Larry Garron,” the Patriots’ running backs.

As for the goalpost-storming day in 1988, Bills fans can thank one Frederic Charles Smerlas that the game got to overtime at all.

Preston Ridlehuber is, depending on your point of view, a footnote to football history – or the most important man who ever played it, writes Erik Brady.

Erik Brady: Nothing mattered more to John Bowman than family. And for him, Buffalo was family.

Basinski was one of the ever-dwindling group of retirees not receiving an MLB pension.