The longtime director of a Christian youth camp in Delevan is refusing to step down despite complaints that he inappropriately touched young women and girls at the camp and when he was a youth pastor in the 1990s at one of the area’s largest churches.

The Chapel in Amherst said it cut ties with the Circle C Ranch following an internal investigation by a Texas lawyer that found Wayne Aarum had engaged in a “pattern of inappropriate behaviors,” such as stroking the legs and touching the clothed breasts and genital areas of young women and teenage girls.

Attorney Kimberlee Norris said she interviewed 21 women who alleged “inappropriate touch” by Aarum. Some of the allegations date back to 1990s, when Aarum ran a ministry program for high school students at the Chapel. Other inappropriate behaviors allegedly occurred during his time as Circle C Ranch director, since 2000, although none of the complaints related to behavior within the past five years.

Aarum, 54, denied the allegations and has refused to step down as camp president. He has the backing of the camp’s board of trustees, which released a response to Norris’ report stating that “there is no substantial evidence supporting” the claims.

Norris also wrote to the New York State Office of Children and Family Services with a list of dozens of inappropriate actions alleged against Aarum, including entering cabins without knocking or announcing himself, while girls were changing clothes; meeting alone with girls in his office after lights out; whispering intimate statements to girls, such as “I love you” and “You are so beautiful”; and giving back massages that included rubbing of girls’ buttocks.

“Girls, now women, who participated in the investigation said that the behaviors became so normalized that they assumed others, including parents and ministry leaders, knew and approved,” Norris wrote in her letter to the state office.

The allegations also were referred to the Cattaraugus County Sheriff's Office, which is investigating, according to Sgt. Drew Silleman.

Circle C Ranch's board of trustees said they did their own investigation. The board – which consists of Wayne Aarum, his brother, Wes, and Daryl Dekalb – posted a 34-page report on the camp's website, along with a response to Norris’ report and various statements objecting to the Chapel’s actions.

In one letter, the board accused the Chapel’s executive pastor, John Camardo, of defamation. The board also claims that the Chapel is attempting to use the women’s claims to generate controversy and take over the 315-acre rural camp that has been in the Aarum family since 1968.

Aarum recently tested positive for Covid-19 and was seriously ill. He was not available Wednesday to speak to The News, said Dekalb. But Dekalb defended Aarum as a "true Christian" and said he had done nothing wrong.

"He totally denies any wrongdoing whatsoever," said Dekalb, who is also a former member of the Chapel board. "Wayne has ministered to thousands and thousands of kids over the years, and we never heard anything from anybody."

"This is why we're suspicious of these charges. We've seen nothing, heard nothing, and they're operating from an anonymous standpoint with everybody, and we believe they have an agenda ...  to take over the ranch," Dekalb added.

In an interview in March with WKBW-TV, Aarum said he had "zero recollection" of touching anyone inappropriately.

Officials at the Chapel said they were first made aware in 2019 of allegations about Aarum’s inappropriate behavior at the camp and took that information to the Circle C Ranch board, according to a statement provided to The News and posted on the Chapel's website.

Chapel leaders learned a few months later about additional allegations of inappropriate behavior by Aarum during his time as a church staff member from 1991 to 2000. They spoke to Aarum, who denied any wrongdoing, according to the Chapel's statement.

“The membership was advised that the independent investigation credibly confirmed a pattern of inappropriate interaction with young women involved in The Chapel's student ministry in the late 90s and also uncovered ongoing inappropriate interaction with young women not associated with The Chapel who had been involved in the previously referenced local youth camp over the last two decades,” The Chapel said in its statement.

Chelsea Carnahan, 28, recounted how Aarum would stroke her back and hair, hold her hand and touch her legs during one-on-one counseling sessions and talks when she was a Pioneer High School student from 2006 to 2010. She also attended First Baptist Church of Arcade, where Aarum is pastor, and volunteered at the Circle C Ranch in the winter.

“He’d get uncomfortably close to my face, and I remember thinking as a teenager about the tension of him being so close to my face, like is he trying to kiss me?” said Carnahan, who now lives near Tampa and works in a restaurant. “I remember a lot of hugs lasting a little too long.”

Sometimes he would grab her from behind and pull his pelvis tight to her body, she said. Carnahan described Aarum’s actions as “grooming” and “sexual predation.” She also accused Aarum of inflicting what she termed “religious trauma” on her.

Carnahan said she was not among the 21 unidentified women cited in the investigative report. She said she reported her complaints to Camardo after Aarum’s denials were posted online at the camp website.

Aarum and his supporters have maintained that he is unable to properly address claims being brought against him because he doesn’t know who has made them. But Carnahan said she has made clear on social media who she is and what she alleges Aarum did.

Aarum’s denials prompted Elle Campbell to post on Twitter that she was one of the “21+ victims and 27+ corroborators” who were interviewed for Norris’ report. Campbell declined to comment further when contacted by The News.

In its response to Norris’ report, the Circle C Ranch board suggests that the volume of complaints against Aarum was related to the work he did, often with troubled teenagers. But the allegations are from a small percentage of the young people Aarum has worked with over the years.

"Wayne’s work prevents teenage suicides, avoids teen pregnancies, postpones too-young marriages, helps confront bullying at school, teaches how to respond appropriately to parents and authority figures, how to survive peer pressure, and how to defend their faith in a kind, positive way,” the board said. “It is very difficult to do this kind of work successfully from across the room. That always raises the risk that someone will find the teacher to be too close for comfort. Speaking the truth to a difficult situation can be met with hostility, fear, and a wide variety of other responses.”

The board’s own investigative report also suggested that the unidentified women cited in Norris’ report may have misinterpreted Aarum’s gestures of good will because of a “common type of trauma in their past ... that makes them ultra-sensitive to certain kinds of verbal Bible teaching or certain physical actions such as hugs that are entirely appropriate and not at all offensive to other women in the same circumstances.”

The case has cracked a small window into the inner workings of the Chapel, one of the area’s largest and most influential nondenominational Christian churches. The Chapel has thousands of members on its rolls and helped launched several other congregations in Western New York.

Some Chapel members expressed anger and frustration over how leadership handled the investigation of Aarum, who was popular with many people connected to the church. Wayne’s brother, Wes, was highly regarded as a minister at the Chapel for many years, as well. Wes Aarum recently resigned from the Chapel after declining to step down from the Circle C Ranch board, according to a transcript of a meeting Camardo had with church members in January.

The 75-page transcript, which was posted online at the Circle C website, reveals rifts within the congregation, with members pressing Camardo for details about the investigation of Wayne Aarum and the resignation of Wes Aarum.

Some church members objected to what they considered a lack of disclosure earlier about the allegations against Aarum, while others suggested the investigation was tilted against Aarum.

Some members defended Camardo’s handling of the situation, including an unidentified board member in the meeting who pointed to the Catholic Diocese of Buffalo’s troubles in recent years “for sweeping all of this stuff under the rug.”

“When you are a leader of a church and somebody comes to you and says somebody on your staff abused kids while he was on your staff, what would you expect him to do?” the speaker said.

At one point in the meeting, Randy Fancher, a former trustee of the Circle C Ranch, said the camp’s board hired an attorney more than a year ago to investigate an allegation against Wayne Aarum. The attorney advised that Aarum step down as president and camp director, but the board didn’t follow through on that advice, said Fancher, who no longer is on the camp’s board.

Fancher said the camp had documented instances in which other camp leaders had approached Aarum about his actions.

“There was documentation of people going to Wayne and saying, ‘Hey listen, like, we love you, but you need to be careful of this.' And this started 20 years ago,” said Fancher. “I, myself, personally 20 years ago sat down with Mr. Wes (Wayne Aarum’s father) and said, ‘I love Wayne with all my heart, but I saw him interact in a way that was just inappropriate.’ ”

Fancher said he also has heard firsthand accounts from women “who are truly victims.”

Camardo also told the congregation there was no truth to the rumor that the Chapel was attempting to take over operation of the camp.

Wayne Aarum and his wife, Julie, in an interview with WKBW-TV about allegations that Wayne Aarum inappropriately touched girls and young women while a youth minister at the Chapel and at Circle C Ranch, a Christian camp he runs in Delevan. 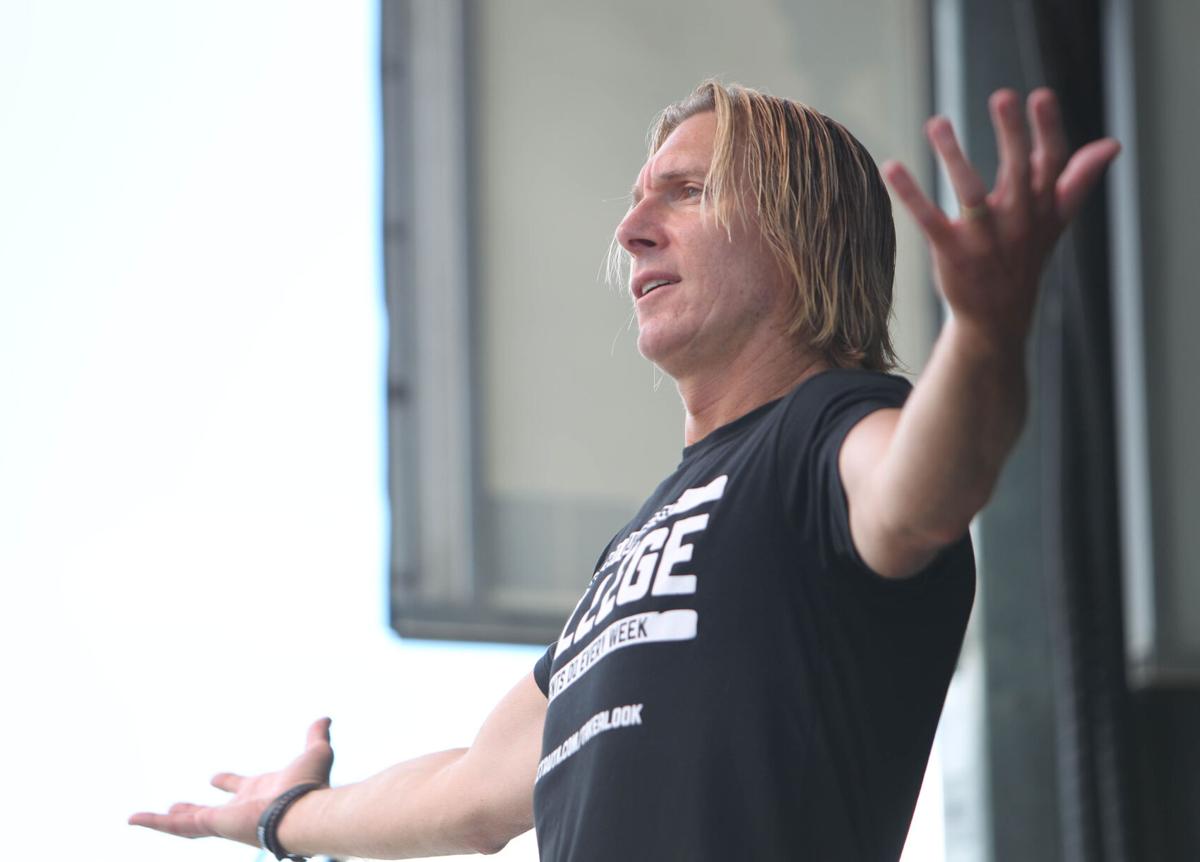 Wes Aarum preaches at Kingdom Bound at Darien Lake in 2012.