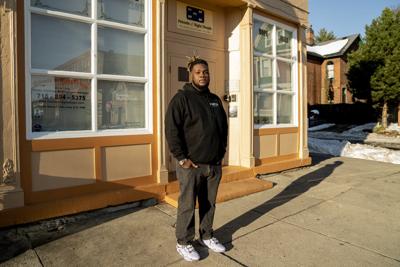 This will always be Thanksgiving, as Mark Talley perceives it:

He is in fifth or sixth grade, a little guy growing up near Humboldt Parkway in Buffalo, and he wakes up to an aroma commanding the whole place. He rolls out of bed and hurries to a kitchen at the center of it all, where his mother is moving fast between the table, the stove and every counter in the room.

Geraldine Talley – "Gerri" to close friends – has been up since 3 a.m. or so, cooking. She will spend the entire day in the kitchen, with the food coming in one unending celebration. Turkey and dressing are the features, but there is so much else, offerings drawing deep on family heritage from Alabama, where Gerri was born.

Candied yams. Collard greens. Cornbread. Macaroni and cheese. Then there are oh-so-good desserts, the German chocolate cake and sweet potato pies. While the child is drawn straight toward those delights, his mother pulls him back: “Not yet!”

Dinner, Gerri says, is still a long ways off. But then she remembers, as if by chance, in a routine that plays out the same way every year: the yams. That little piece of sweet potato pie. Maybe she does have a little extra, just a little piece, and that sweet stuff in that bowl over there … would Mark mind using a spoon to clean it out?

“Mom loved Thanksgiving,” said Talley, 33, who maintains she loved it even more than Christmas. Her passion was cooking. She took joy in feeding her three kids, as well as all the relatives and friends streaming in for the better part of two solid days. This holiday, in many ways, defined who she was.

Talley, in his own fashion, will step in for her this morning.

“I’m just trying to help as many people as I can,” he said, “and it just coincides that my mother’s favorite holiday was Thanksgiving.”

The service Friday was, first and foremost, a celebration of Geraldine Chapman Talley's life, but also a call to action by speakers to stand united against hate.

Gerri Talley died on May 14, one of 10 people shot to death by a man investigators say was a white supremacist mass murderer at the Tops Markets on Jefferson Avenue. She died while shopping in a place that was a bedrock part of neighborhood life, and Mark Talley said he realized quickly – at a time when it seemed as if “nothing had meaning anymore” – that he had only one choice, in response.

“I couldn’t let evil thoughts take hold,” he said, turning instead to what he calls “my therapy and my sanity and my coping mechanism.” He had spent much of his adult life working with people – especially youths – who were distraught or felt abandoned. He willed himself to shift from his own anguish to the pain always simmering around him, in his city.

Within days of losing his mother, Talley made a call to Patty Krehbiel, relationship manager at Friends of Night People on Hudson Street, which attempts to amplify community awareness and response to homelessness – while "serving humanity daily," as Krehbiel puts it, through meals and services. Talley, who already volunteered with the Friends, explained that people were bringing food to his house in a flood beyond what he and his wife, Rosh, could ever eat, and he asked Krehbiel: Could guests of the Friends use it?

In a sense, that call ignited the web of alliances leading to where you will find Talley on Thursday morning, hurrying between the corner of Utica Street and Jefferson and the Friends of Night People kitchen, two spots wrapped together by the same Thanksgiving outreach. To make it happen, Talley and his new Agents for Advocacy organization joined forces with a coalition of Buffalo civic groups or businesses.

His primer was a community barbecue he organized in the summer, an event that fed more than 600 people on Jefferson. It was a swift education in knitting together a collective goal, the reason his phone is now almost always at his ear, and one request he made for this piece was providing thanks to so many stepping in to help today:

Volunteers will distribute hundreds of Thanksgiving meals in bags to those in need, while offering fresh Thanksgiving pies. They will also hand out clean socks and underwear. The driving force, Talley said, is addressing civic suffering and displacement in the wake of the pandemic.

Turning tragedy into purpose: How the son of a Tops shooting victim is coping by giving back

Mark Talley, the son of Tops shooting victim Geraldine Talley, is channeling his grief into something positive to help others and to help the community where he was raised.

She grew up in foster homes. Her "Fostering Greatness" organization is dedicated to helping young adults transition from foster care into stable and secure lives in the community. The tale of any foster child, she said, begins with parental loss, and she said Talley – always empathetic – has an understanding that now reaches the most untouchable of levels.

“He knew first-hand the trauma they were going through,” she said of the community she serves. She and Talley are planning a special meal and celebration for December, a way of providing warmth and support to young people in foster care whose pain is keenest as they near the holidays.

Daniel has no doubt about Talley’s motivation.

Talley is working on a book to bring all of it together. He will describe a period as a young man when he was drifting – he realizes now just how much he was at risk – and Gerri Talley helped bring him back to the kind of ethic he now tries to embrace.

All of it leads him to recall last Thanksgiving, when he did not go over to his mom’s until later in the day. Unlike his mother, he describes himself as a natural introvert. He said he struggles to be comfortable in crowds, and the holiday parade of people sometimes wore him down.

As Thanksgiving afternoon rolled into evening, Gerri called and said: “Are you coming over for a plate?” Knowing what it meant to her, Talley showed up. He walked into rooms where the aroma brought him straight to when he was a child, and his mother again had a special plate set aside for him. Before he left, he hugged her and said that he loved her.

There was every reason to believe that moment would be repeated many more times in their lives, and the only way he can bear that it is gone is to provide – through his own approach – what Gerri knew the day was for.

Krehbiel, who lost her mother to illness last summer, has a notion of his grief. So does Daniel, whose mom died last year, though they both speak with a certain awestruck gratitude of the way Talley contemplates the hatred that led to Gerri's death, then channels such loss into what will happen Thursday on the streets of Buffalo.

Sean Kirst: In Buffalo, hearing the song of a grieving child who 'could not weep anymore'

Lives of untouchable meaning wiped out, officials say, because of rigid, shallow poison.

It is a blasphemy. This is Buffalo. Each of the dead is us,

True communion that may be our one searing path forward.

Reflecting on that process, Talley described a turkey giveaway held the other other night to benefit the Peacemakers. He had a chance to speak with Buffalo Bills offensive lineman Dion Dawkins, who listened intently to Talley’s story and then offered this response.

The way Talley heard it, Dawkins was saying there are moments in life when, for whatever reason – sometimes painful, and sometimes beyond your own control – you are suddenly given a clear voice that rings out in the crowd. You have a singular chance to use it for healing, inspiration and to bring about real change, and Dawkins seemed moved by what Talley is doing at such a crossroads, behind an impetus set in front of us today:

It is Thanksgiving, where a son finds the root of everything. 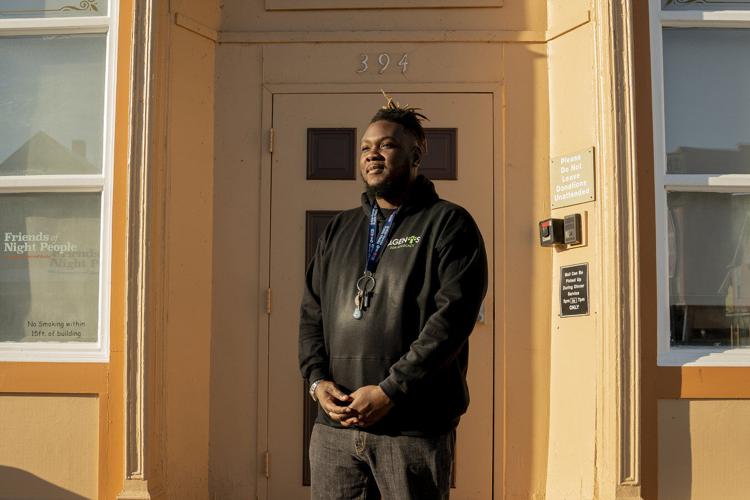 Mark Talley in front of the Friends of the Night People kitchen: The organization is one of many partnering with Talley for a food and clothing distribution on Thanksgiving morning. 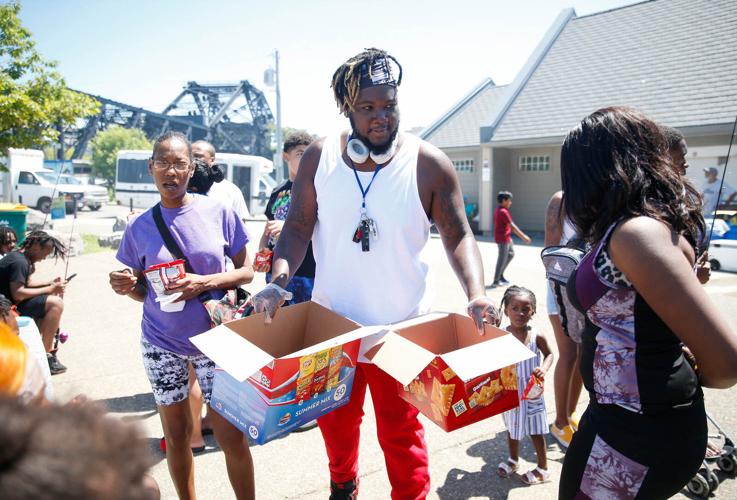 Mark Talley during a volunteer effort at Broderick Park, only weeks after his mother, Geraldine Talley, died in the racist mass murder at Tops Markets on Jefferson Avenue. 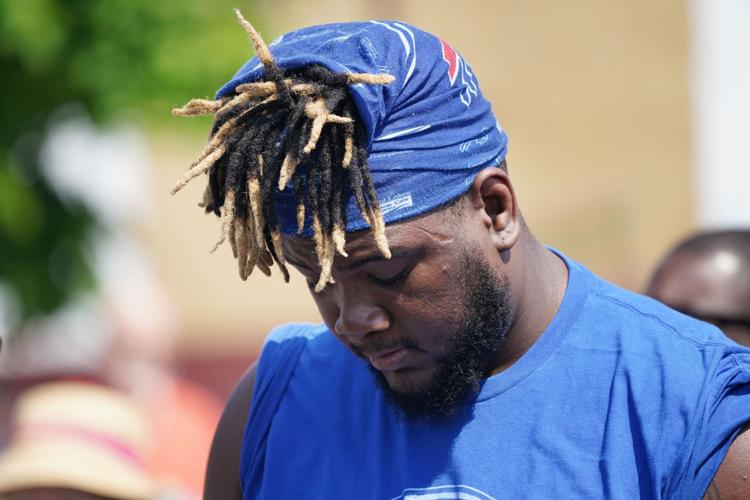 Mark Talley bows his head during a moment of silence outside the site of the Tops massacre. 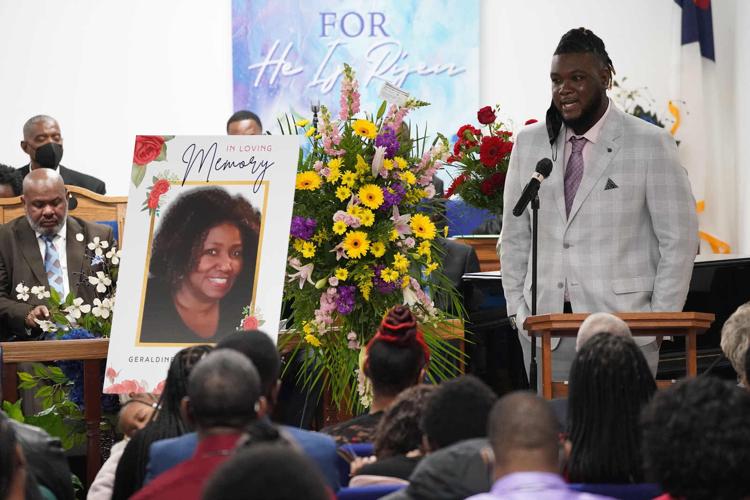 Mark Talley delivers reflections during the Celebration of Life service for his mother, Geraldine Chapman Talley. 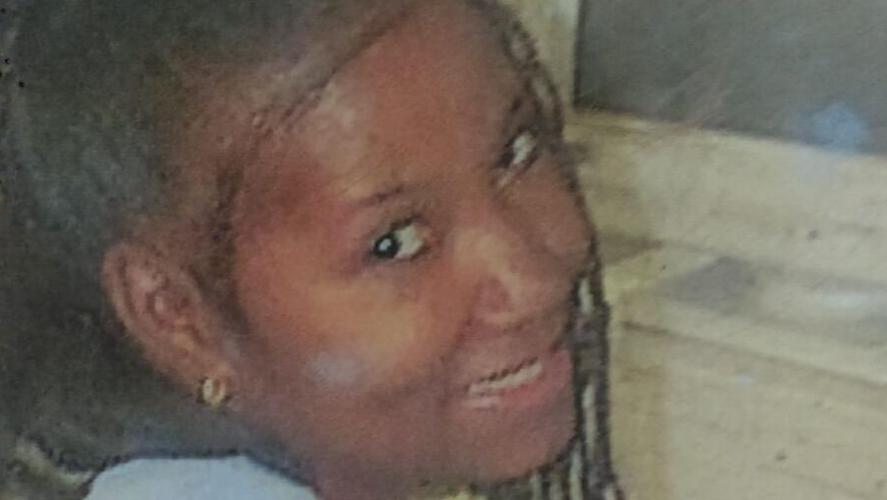