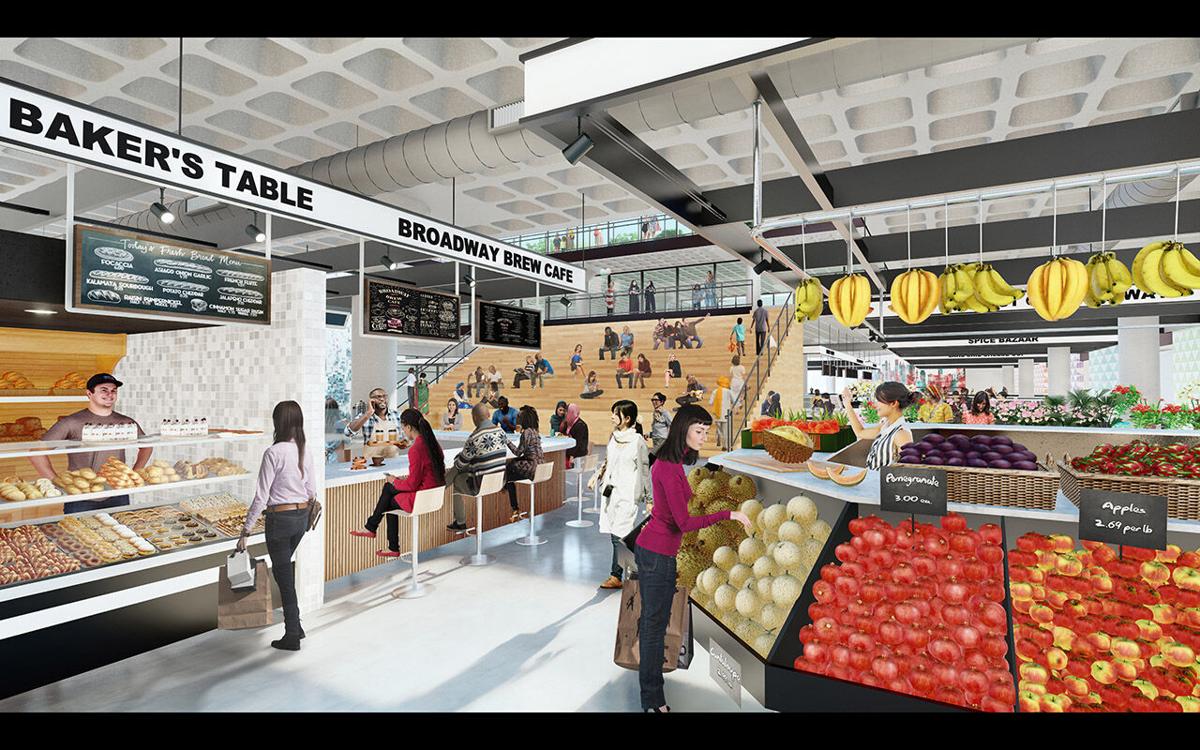 A rendering of how the Broadway International Public Market could look. 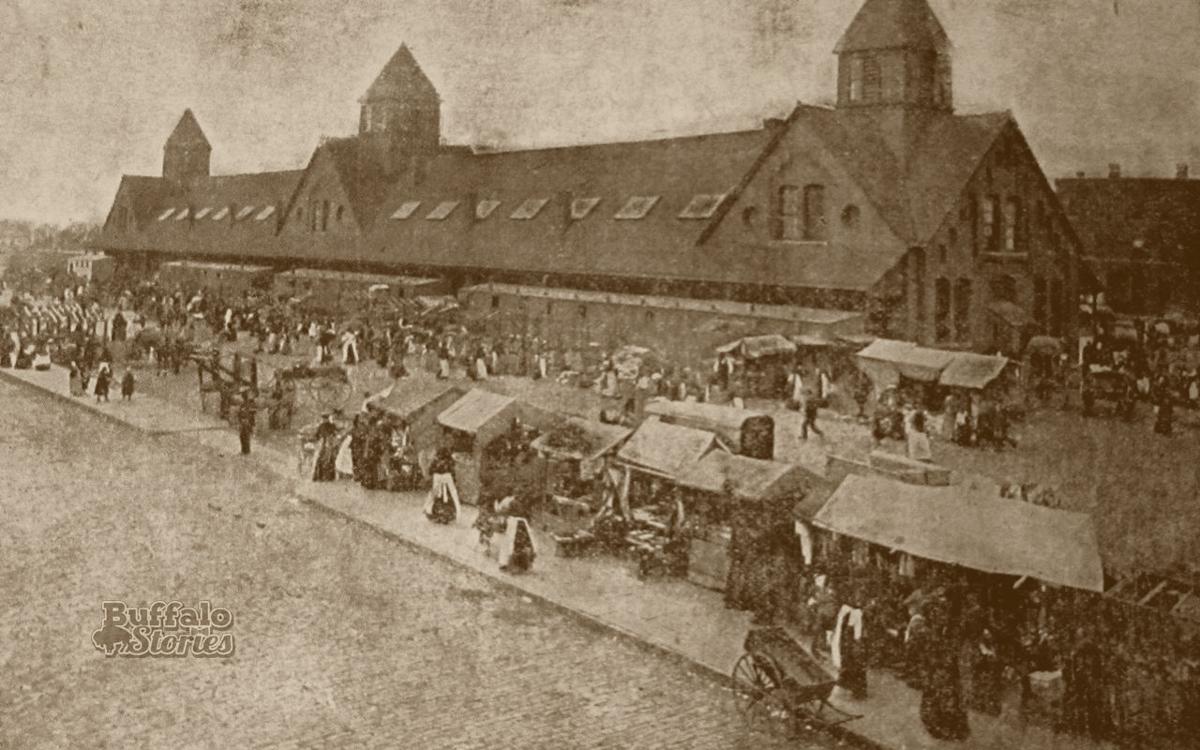 A plan developed by a national expert on public markets recommends big changes to rid the Broadway Market of its feast-or-famine cycle: busy at Easter, but slow the rest of the year.

At a cost of $50 million over five years, the plan from Aaron Zaretsky calls for transforming the market into an international food mecca.

That requires turning the page on what boosted the market in decades past: its Polish identity.

Instead of many tenants still striving to serve those with Polish or German ancestries, who have for the most part long departed the Broadway-Fillmore neighborhood, the renamed Broadway International Public Market would capitalize on Buffalo's rich ethnic communities to create a must-see destination.

"Buffalo has long been a city with lots of different races and ethnic groups and immigrant groups, and it's a way to knit the community together in a way that has never been quite done here," Zaretsky said.

Think food stalls with fresh and prepared foods, international groceries and restaurants, each specializing in foods from Africa, Asia, Europe and Latin America.

The plan spells out a vision: "Strolling through the market, the aroma of fresh ground coffee will mingle with Jamaican jerk chicken and spicy greens sizzling in the pot. The scent of artisan baked hot bread, fresh from the oven, blends with warm, sweet potato pie cooking on the counter. Upon entering, all will be transported to another place, another time.

"Visually, the market will be a feast for the eyes," the plan continues. "Food will be produced in front of the customers, not hidden in the kitchen. Product displays will be works of art. Braided garlic and peppers, giant cheeses and smoked meats will hang down from the upper stall rails. Barrels, baskets and bins will rise from the floor filled with the world's bounty."

The vision inspires hope among some – and skepticism among others, who remember studies over the years to remake the Broadway Market but now sit unused on shelves.

"If they invest that kind of money it would make a drastic change," said Atiqur Rahman, who owns a nearby hardware store and has helped recruit hundreds of Bangladeshis from New York City to live and work in Broadway-Fillmore.

Others such as Sam Hoyt, and former assemblyman and Empire State Development official, favor putting a public market at the former Delaware, Lackawanna & Western Railroad terminal near Canalside.

"There are endless examples of cities that have really cool markets that feature and celebrate ethnicity, have amazing food products and are centrally located in the downtown corridor," Hoyt said.

"I hope they do something, but I don't think so," said Ruban Selva, owner of East West Cafe. "I've been here almost 13 years now, and they always talk but they don't do anything."

Amanda Mays, the Western New York regional director at Empire State Development, cited Zaretsky's track record at public markets around the country, which includes 15 years as a director at the Pike Place Market in Seattle.

"We have to work with our partners in the city and the county, and probably philanthropy, too, to figure out what is achievable," Mays said. "I think we all have to come together at all levels of government to figure out the next step."

Public markets will be as popular if not more so after the pandemic, Zaretsky said.

"Once Covid is a bad memory – and it will be – people will flock to public markets to experience the essence of their humanity and to shop," he said. "Then, places like a rejuvenated Broadway International Public Market will thrive."

The plan's analysis of the Broadway Market, which needed a $111,338 city subsidy last year, identified its shortcomings.

"Sadly, the Broadway Market is unattractive, underutilized and underperforming ... It is an economic drain on the City of Buffalo ... This is a model for failure, not success," the report said. "Neither tepid solutions nor Band-Aids can address these concerns."

"The driver of the idea is that it has enough critical mass and enough exciting things going on that it really will bring people in from the entire region," Zaretsky said. "It needs to be big enough or not at all."

"The parallels to Cincinnati are really spot on," Zaretsky said.

"The Over-the-Rhine neighborhood that surrounds Findlay Market has exactly the same history as the Broadway Market," he said. "German and Polish immigrants who lived there and built it up moved out to the suburbs as African Americans moved in, and they came back once a year, just like in Buffalo."

When Zaretsky put together a master plan for the Findlay Market in the early 1990s, it was down to eight permanent tenants.

A riot in the Over-the-Rhine neighborhood in 2001 following a police shooting proved to be a catalyst to implement the plan.

The revitalized market saw an increase to roughly 100 permanent merchants, and its success helped spark its neighborhood's rebirth.

Zaretsky said the Broadway-Fillmore neighborhood, which has a 55% poverty rate, has less crime than the Over the Rhine neighborhood did when he developed the Findlay master plan.

"The crime is mostly property crime around the Broadway Market," Zaretsky said. "I think it's mostly a perceived problem rather than a real problem."

The plan recommends better lighting and better use of the police substation housed in the market.

Zaretsky, who has done consulting for nearly 60 public markets, said he was surprised by how much the Broadway Market means to residents. Feedback from over 1,000 citizens came through surveys, interviews and community meetings.

"Given all of the problems that are so obvious about the Broadway Market, I was really impressed at how much people still loved it and really cared about it," he said.

"It's a generational thing," said Andrea Cooley, who has shopped at the Broadway Market her whole life.

"It's been here a long time and the community definitely needs it here," Cooley said. "We need some upgrades and anything positive they're trying to do I'm all for."

A key decision, if the plan is followed, calls for creating a nonprofit to manage the market, Zaretsky said. Nearly every successful public market operates in that manner, he said. The market is currently overseen by the city's real estate department.

"The whole idea is to make it more transparent and inviting, and let people see what's going on in there," said Robert Stark of CJS Architects, a Larkinville-based firm partnering with Zaretsky on the project. "Right now it's almost bunkerlike.

"We'd like to make the entrance grand and inviting, with some of the vendors spilling out to activate the street with outdoor eating," he said.

The first floor would be expanded by removing parking, since hundreds of spaces already exist on the second floor. The underutilized basement would be used for walk-in coolers and storage for vendors.

The roof would include basketball courts, seating areas, greenhouses and solar panels.

The plan also recommends a plaza at the South Washington Street end of the property and a seasonal farmer's market on Gibson Street.

The Editorial Board: Broadway Market deserves chance at rebirth with ambitious renovation plan

"A plan put forward by developer Aaron Zaretsky to reimagine the Broadway Market as an international food emporium shows great potential," writes The News' Editorial Board.

The newest wave of immigrants to set up homes on the East Side has started adding dishes to Broadway Market mealtime menus.

Chrusciki Bakery's 33-year run as a year-round vendor in the Broadway Market came to a close at the end of June, owner Ania Duchon confirmed following a detailed update on the business' Facebook page.

There are few institutions that continue to serve Buffalo in mostly the same way since the 1918 Spanish flu pandemic, but the Broadway Market is one. During the 1918 flu, Mayor George Buck shut down nonessential businesses in Buffalo. With a ring of the familiar, taverns and churches were closed to help stop the spread. But then as now,

The Broadway Market bustles every Easter ... but not this year

“We want people to know the market is still here, our vendors are here and we’re open for business,” said Kathy Peterson, the Broadway Market’s

Many shops at the Broadway Market, after experiencing their annual Easter boom, must now contend with business as usual: Few customers, and little hope of that

A rendering of how the Broadway International Public Market could look. 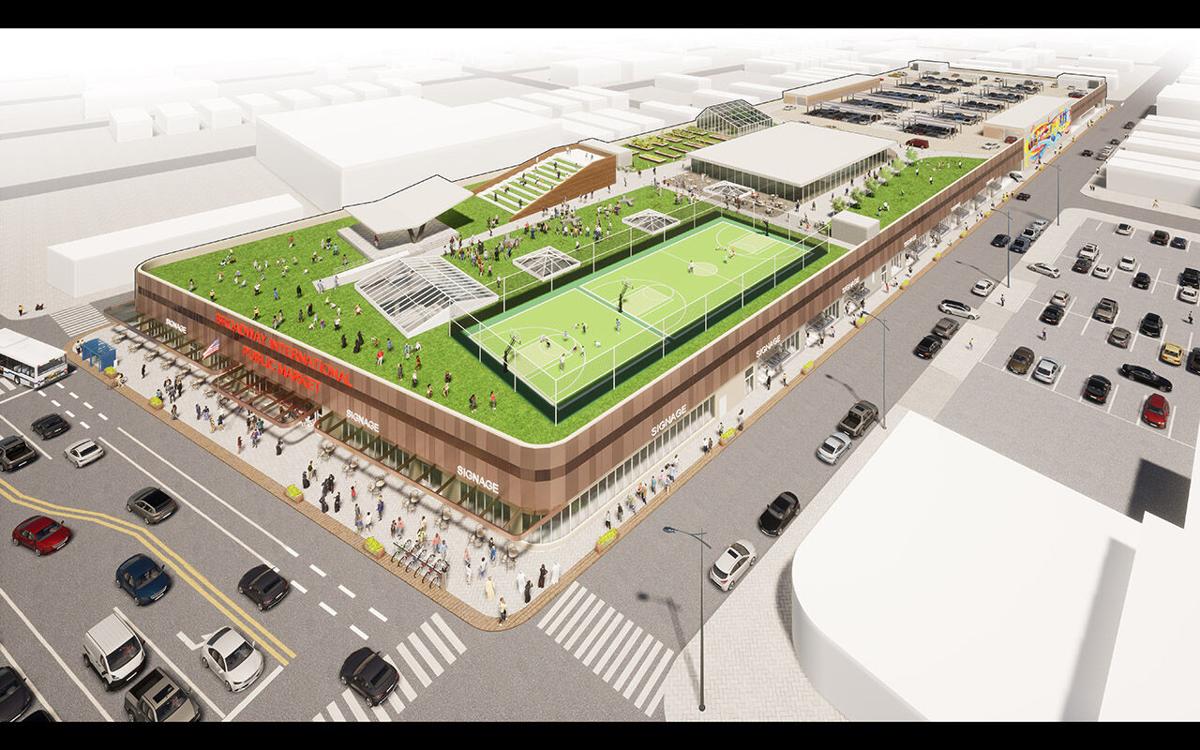 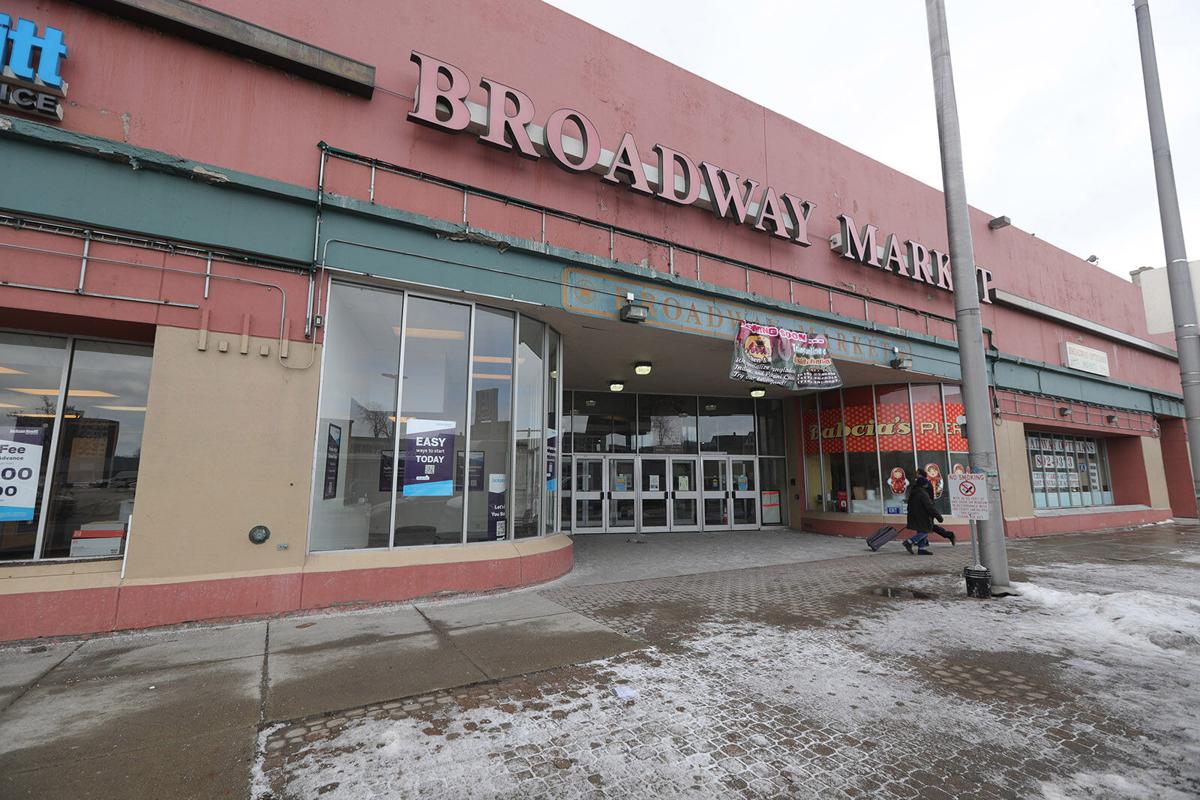 The Broadway Market in Buffalo has been a fixture in the Broadway-Fillmore neighborhood for generations. 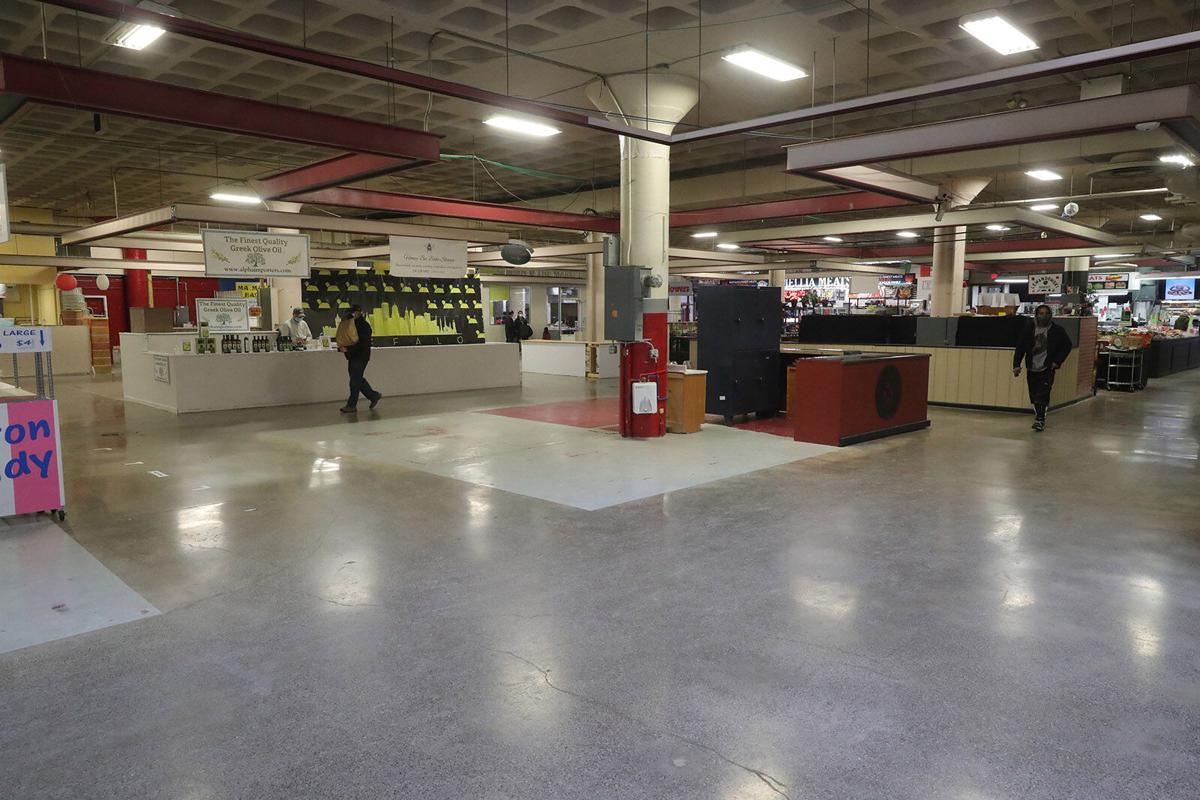 These days the Broadway Market is sparsely attended, with few year-round vendors.