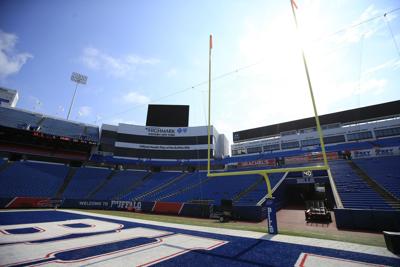 Over the past two decades, no matter the size of the market or the wealth of the owner, communities that host a National Football League team pay toward the cost of a new stadium.

Since 1998, two-thirds of the league’s 32 teams have unveiled new stadiums.

A Buffalo News analysis of available financial information found the public paid an average of 50% of the cost of constructing the 21 most recent new NFL stadiums, with the team covering the rest.

“The vast majority of small to midsize markets have received significant public funding for their stadiums,” said Ron Raccuia, an executive vice president with Pegula Sports and Entertainment, the business entity controlled by Bills owners Terry and Kim Pegula.

Experts say this is because the prospect of relocation, which hangs over many stadium negotiations, strikes particular dread in smaller markets. The threat is real: At least eight of the 21 stadiums were built for a relocated team or for a franchise replacing a team that moved.

“They’re more susceptible to the threat of the team leaving and, also, they are more invested in the team,” said Neil deMause, co-author of the book “Field of Schemes,” who operates a stadium-financing website under the same name.

Declining public share: The late 1990s and early 2000s saw a boom in stadium construction where communities took on a significant share of the stadium costs. The 11 stadiums that opened between 1998 and 2002 received an average public share of 65%, The News found. The 10 that opened since then saw the public pick up 34% of the cost.

There are a few factors at play here, observers said. The more recent stadiums, on average, were built in larger markets such as the New York City region, Southern California and metro Dallas, where owners can more easily recoup their expenses, said Kevin Reichard, editor of Football Stadium Digest.

Also, the rising use of personal seat licenses – which offer fans the right to buy season tickets but require a hefty upfront payment – and an expanded NFL loan program worth up to $200 million give teams more ways to raise private funds toward stadium costs, Reichard and others said.

Pay to play: How 21 NFL stadiums have been financed

Most stadiums were built with a mix of private and public funds.

A caveat: Communities often pay to support new stadium construction in ways that benefit the teams but aren’t included in the accounting of the public costs, experts said.

Teams can receive stadium property at low or no cost, valuable tax breaks, lucrative development rights to surrounding land and tens of millions of dollars in public spending on roads and utilities.

Further, the community may contribute or cover outright some of the costs of operating, repairing and upgrading the stadium as it ages.

“What often happens, and almost invariably happens, is the private share is supported by massive government help, which doesn’t get counted in the 60-40 or whatever the split might be,” said Andrew Zimbalist, a Smith College economist who puts the trend in NFL stadium deals at a 60% public share.

Public support varies: States and counties typically borrow to cover their share of the construction costs and find a recurring source of revenue to pay off that debt.

Elected officials are fond of turning to lottery proceeds and fees that fall heaviest on visitors to a community, such as car rental or hotel taxes.

“When you rent a car in Phoenix, there’s a specific line item for stadiums,” Reichard said.

Sales tax and taxes on activities tied to stadium events, such as tickets and parking, also are popular. They try to avoid tapping into their general budgets but occasionally must do so when the taxes don’t generate enough revenue.

“It’s the ‘tax the guy behind the tree’ strategy,” said deMause, referring to an old saying: “Don’t tax me, don’t tax thee, tax that fellow behind the tree.”

What to expect here: The News and other outlets have reported the Bills owners expect Erie County and the state to cover most of the cost of a $1.4 billion stadium.

“You do not become a billionaire by willingly paying for things that you can get someone else to pay for,” deMause said.

The Pegulas can tap into the NFL loan program but other sources – personal seat licenses, naming rights to the stadium and luxury suite sales – won’t raise as much money here as in a larger market.

And while team and public officials have said the Bills are not threatening to leave this area, Zimbalist said the owners have options because numerous other cities covet an NFL franchise.

“They’re not stuck on Buffalo,” Zimbalist said. “They have a lot of bargaining leverage."

After reading Stephen T. Watson’s excellent article, “25 years of new stadiums: What taxpayers have paid,” my feelings toward a new Bills stad…

"Just do it," said Larry Quinn to whether New York State and Erie County should help the Pegulas construct the $1.4 billion stadium project they are seeking.

"I think a new stadium is what’s needed. I think it’s going to require a public-private partnership," Goodell said Monday while visiting the Jim Kelly Celebrity Golf Tournament in Batavia.