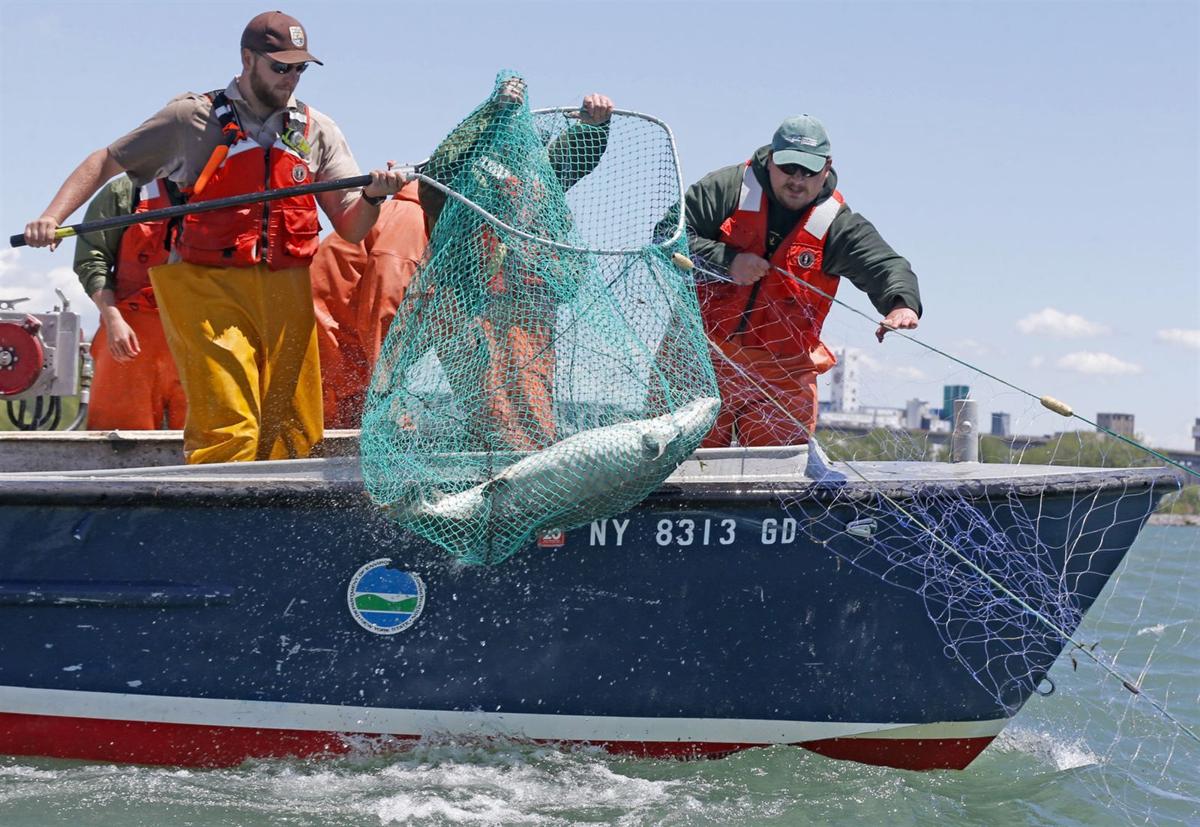 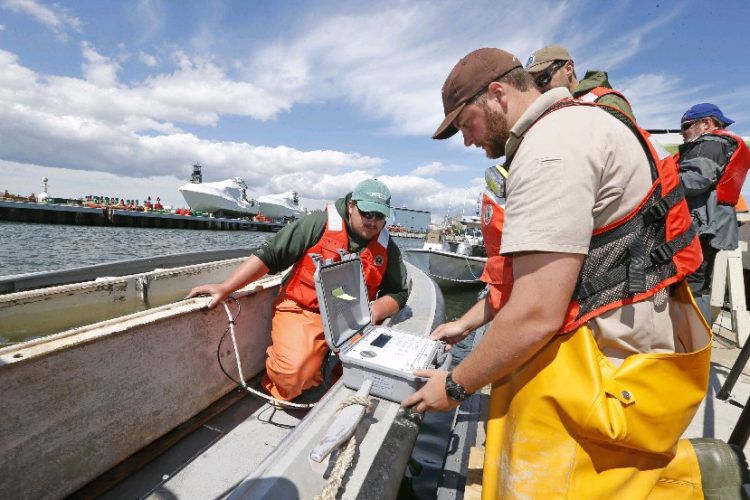 The team tests the tracking devices before the fish are returned to the water. (Robert Kirkham/Buffalo News) 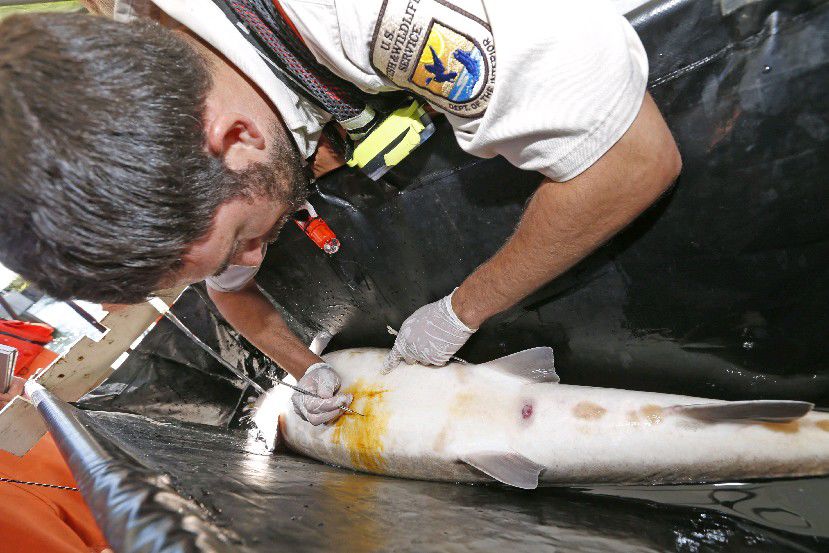 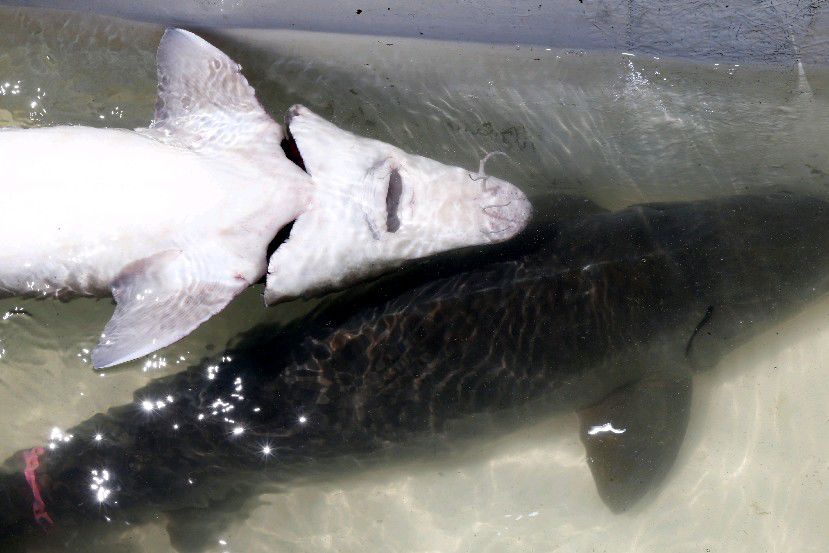 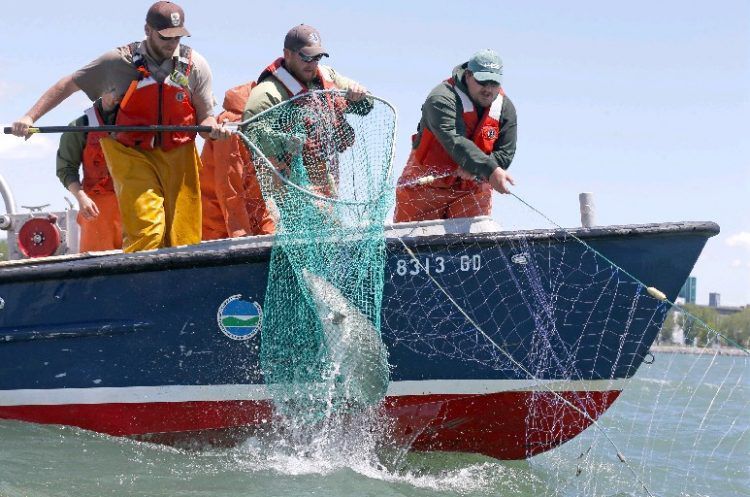 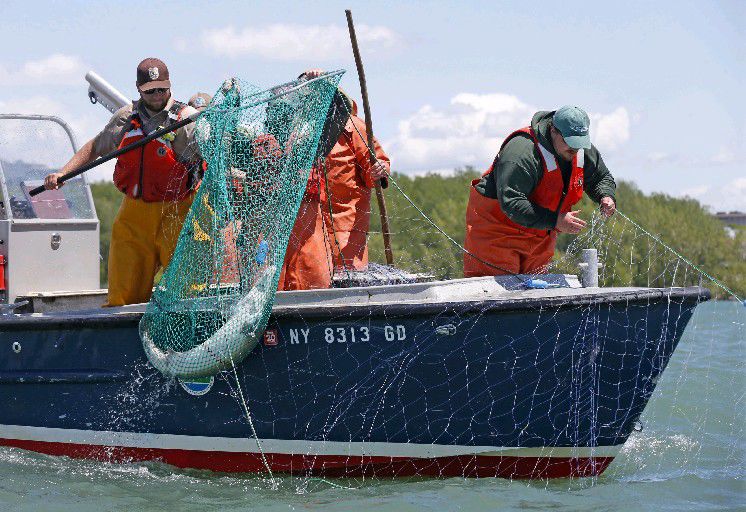 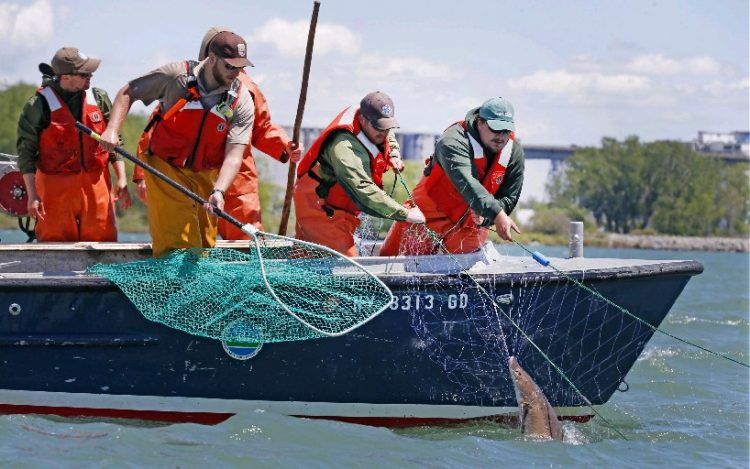 With Nicholas Markley at-the-ready with a landing net, Chris Driscoll, center, and Jonathan Draves, right of the DEC Fish technologies team hauls in a sturgeon. New York state Department of Environmental Conservation and U.S Fish and Wildlife Service were working on a sturgeon tagging study on Lake Erie off shore near the Erie Basin Marina in the breakwall on Thursday. (Robert Kirkham/Buffalo News)

A door opened to scientists six years ago when a fisherman accidentally hooked a dinosaur-looking lake sturgeon in Buffalo Harbor.

It proved that the lake’s longest-surviving native fish species endured.

This spring, state and federal biologists captured and tagged about three dozen sturgeon in the channel between the U.S. Coast Guard Station in Buffalo and the city’s Outer Harbor breakwall as part of their continuing quest to learn more about eastern Lake Erie’s lake sturgeon population. The biologists pulled the last of the sturgeon from nets on Thursday.

“It’s a New York State threatened species that we don’t have a lot of information on,” said Rich Zimar, a fisheries technician at the state Department of Environmental Conservation's Lake Erie Fisheries Research Unit in Dunkirk.

U.S. Fish and Wildlife Service and DEC researchers hope to learn how many sturgeon occupy the harbor, ratios and ages of male and female populations, their habitats, where they go and how frequently they return to Buffalo Harbor to spawn.

It’s an ambitious project for sure, but researchers hope the data they’re collecting will eventually aid sturgeon restoration efforts in eastern Lake Erie.

"Sturgeon species world-wide are purportedly the most imperiled vertebrate group on the planet," said Jonah Withers, a fish biologist with the U.S. Fish and Wildlife Service.

In the late 19th century, millions of pounds of sturgeon were fished from Lake Erie every year. Most of those came from the eastern end of the lake near Buffalo.

Besides massive over-fishing, nearly a century’s worth of industrial pollution and an invasion of dozens of new fish species hurt the sturgeon.

Building research and data on Lake Erie’s sturgeon is literally starting on the bottom of Buffalo Harbor. That’s where the bar-billed, torpedo-shaped sturgeon hang out.

It’s also where they’re caught with a pair of 300-foot-long gill nets deployed by scientists at the entrance to the harbor.

The last nets of the season were pulled on Thursday. That haul produced four sturgeon, including one female.

As each of six 50-foot panels was brought to the surface, biologists used large dipnets, collecting fish and bringing them aboard their boat. Sturgeon were kept in a holding tub of water; other fish species caught were returned to the lake.

After both of the nets were pulled from the harbor, crews returned to a Coast Guard dock with the sturgeon for an expedited but precise individual analysis consisting of a dozen or so steps.

First, the sturgeon was lifted from the boat using a fish stretcher. It was hung on a scale and weighed. Biologists then carried the fish into make-shift tent reminiscent of a battlefield MASH unit.

Withers, clad in orange chest-high fishing waders, his official service shirt and safari hat, led the analysis. The Syracuse native, who got his degree from Queen’s University in Kingston, Ont., specializes in lake sturgeon. He began the procedure with removal of colored rubber-bands from the fish. Those tell scientists which net it came from and where.

Then, the sturgeon’s fork length – from its snout to the fork in its tail – is measured along with its total length and its girth, using a yellow plastic tape measure. At least one was more than four feet in total length.

As Withers used medical scissors to cut a sample from a rear fin for further genetics testing, other biologists used a hand-held electronic scanner to check if the fish had been previously caught and tagged by researchers.

Then, Withers undertook a detailed visual analysis of the sturgeon’s body, including its scutes, dorsal fin and other parts for signs of disease or trauma. In one example, a sturgeon had a scar longer than an inch to its left posterior dorsal from a parasitic sea lamprey.

Biologists used a syringe to insert a “pit tag” – a passive integrated transponder – into the skin of the fish and scanned the unique identification number on the embedded chip using an electronic wand as a second external tag with was affixed near the sturgeon’s rear dorsal fin.

Next, Withers establishes the sex of the fish – or tries to.

Massaging the abdomen of the sturgeon, Withers forced the fish to excrete fluid though an underbelly pore. Then, he tried to make an educated guess. White milt meant it was a male sturgeon. Clearer fluid suggested the fish might be female.

If a fish is suspected to be female, biologists go first to an ultrasound machine.

“Same thing you’d use on a pregnant lady,” said John Sweka, a fish biologist with the Fish and Wildlife Service.

Then, for additional confirmation: minor surgery.

“The only way to be confident is to cut it open and see the gonads or the eggs,” Withers explained.

There was only one suspected female Thursday. Withers, brandishing Betadine antiseptic and a scalpel, opened a roughly 1-inch incision into the abdomen of the fish and made an announcement that drew a small cheer from the nearly dozen gathered biologists.

[Gallery: On the hunt for one of Lake Erie's most ancient fish]

It was only the fourth of 31 sturgeon caught in Buffalo Harbor this year that was found to be female.

There are fewer females than males for good reason.

Female sturgeon, which can live over 100 years, often don’t reach sexual maturity until about age 25. They return to a spawning area every four to nine years, according to the Fish & Wildlife Service. Males, on the other hand, spawn every two to seven years.

Finding female sturgeon is especially important for researchers. They are rarer to find and critical to research.

Withers inserted a separate lip-stick sized acoustical transponder under the skin of the female’s abdomen and stitched the fish up with four clean sutures and some “tissue cement” to hasten healing and keep out microbes.

The acoustic instrument will allow researchers to find out where the fish are going in the eastern end of Lake Erie. There are radio receivers that can pick up signals from the devices implanted in the sturgeon.

“We have slightly over 60 receivers on this end of Lake Erie,” Sweka said. “As the fish swims around, we’ll be able to track the movements of these fish.”

The final procedures performed on the sturgeon included Withers' using a mini-hacksaw to cut a bone sample from a spine on the fish’s left leading pectoral fin and an injection of a fluorescent liquid. Those enable researchers to peg the approximate age of the sturgeon, Withers said.

The team tests the tracking devices before the fish are returned to the water. (Robert Kirkham/Buffalo News)

With Nicholas Markley at-the-ready with a landing net, Chris Driscoll, center, and Jonathan Draves, right of the DEC Fish technologies team hauls in a sturgeon. New York state Department of Environmental Conservation and U.S Fish and Wildlife Service were working on a sturgeon tagging study on Lake Erie off shore near the Erie Basin Marina in the breakwall on Thursday. (Robert Kirkham/Buffalo News)