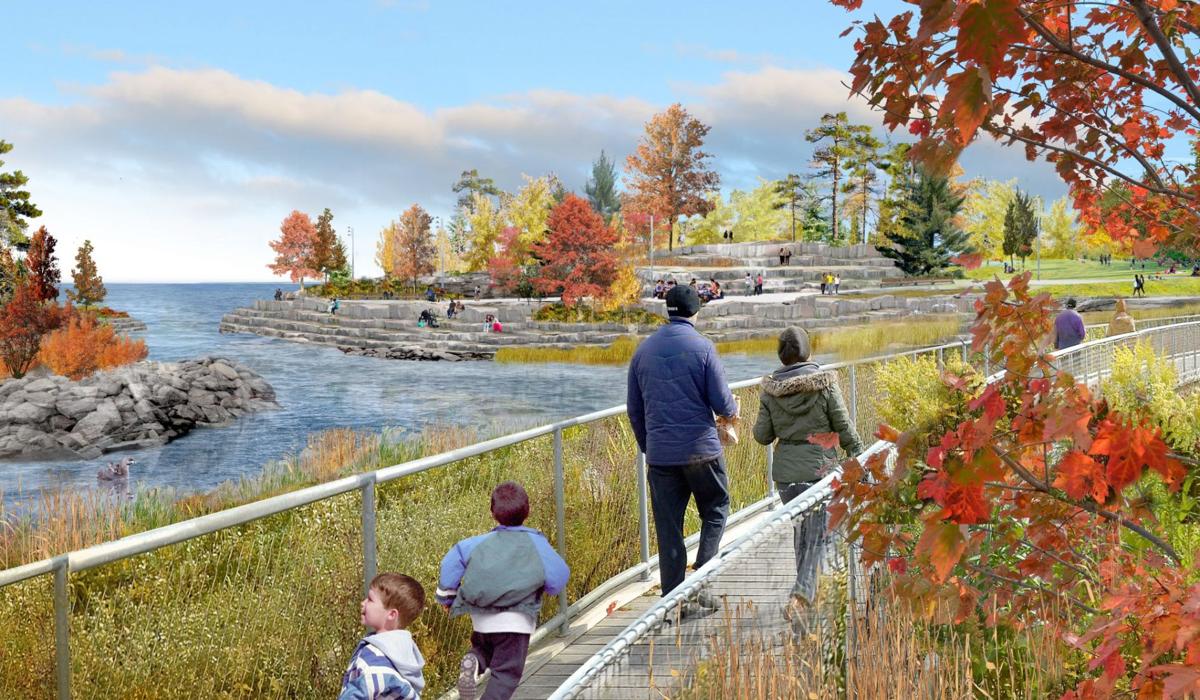 A lagoon is planned for the southern end of LaSalle Park. 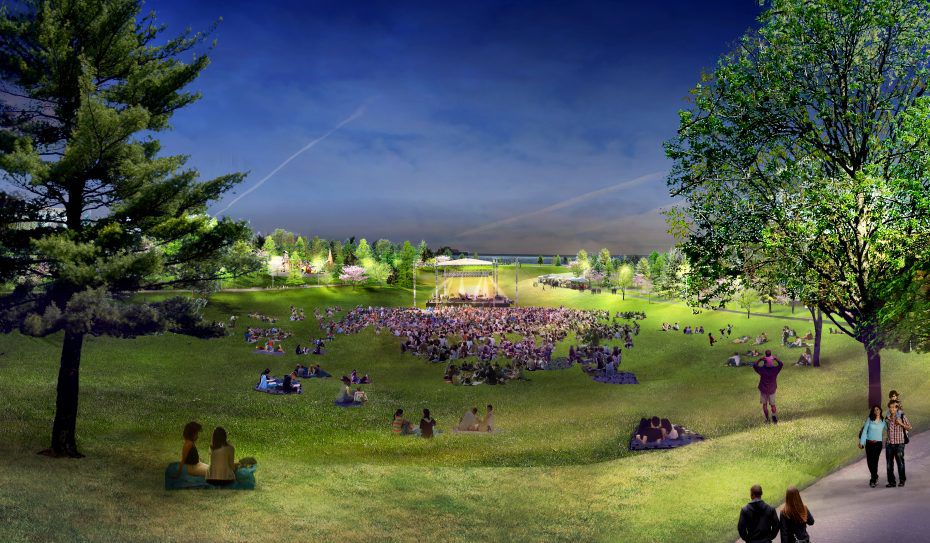 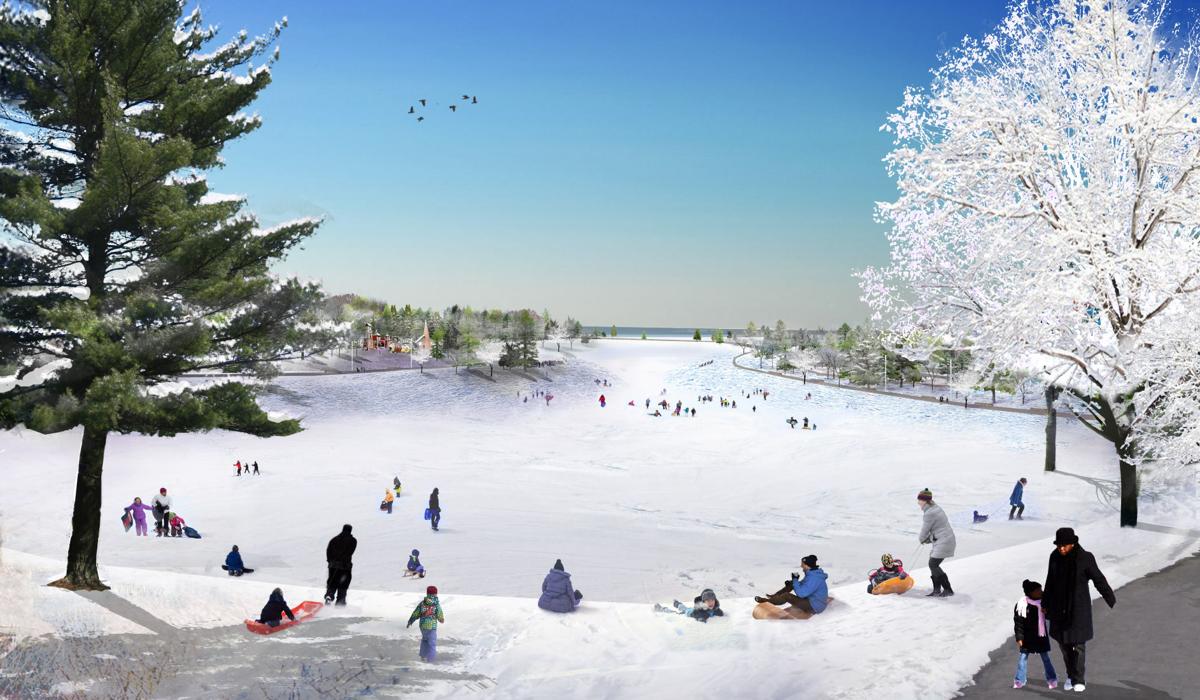 Major changes are planned for LaSalle Park – and you will have to look up to see one of them.

Planners and community members want to add a hill for sunset watchers, snow sledders and concertgoers.

"In our minds, the park is a little too flat," said Michael Van Valkenburgh, whose Brooklyn-based firm is redesigning the park. "Our biggest moves are to add topography and to create the diversity of spaces to make LaSalle a place that is more interesting physically."

There is also plenty more to come for the soon-to-be-renamed Ralph C. Wilson Jr. Centennial Park.

A lagoon providing access to the water's edge. A creatively designed playground. Ecological habitats. And a new pedestrian bridge to replace the overpass that crosses the I-190, connecting the middle of the park to the Lower West Side.

The planned changes to the 90-acre park are part of a "conceptual design" unveiled Friday by the Ralph C. Wilson Jr. Foundation, in concert with the City of Buffalo, the University at Buffalo Regional Institute and other stakeholders.

"In my estimation, it's visionary," Mayor Byron W. Brown said.

The foundation pledged $50 million in October 2018 to build a signature park at LaSalle, along with another $50 million to develop a completed regional trail system. The $100 million is the largest philanthropic gift ever made in Western New York.

The park's redesign drew an enthusiastic reception from Marnetta Malcolm, part of the 21-member LaSalle Focus Group made up of West Side residents and other park users.

"The design I have seen, which includes bringing the lake into the park, is a really good design," said Malcolm, who produces the annual NICYO Buffalo Funk Fest in LaSalle.

"I'm sure it's going to be a fabulous park," she said. "More than anything, I really appreciate that they are really, really listening to the community."

A model of the design will be on view at the Central Library from May 4 to May 8. It will move to Canalside from May 9 to May 14, and then to LaSalle Park between May 16 to May 19. It will then go to the Northland Workforce Training Center from May 20 to May 24. Hours and addresses can be found at www.imaginelasalle.org.

"With the model, people will really understand how significant this park is going to be," said Jim Boyle, the Wilson Foundation's vice president of programs and communications.

The conceptual design may go through some changes before the final design is adopted, with more public input expected.

JJ Tighe, director of the parks and trails initiative, said a groundbreaking is three to four years away.

"We are in step three or four in a ten-step process," Tighe said.

After the first shovel hits the ground, it should take 12 to 18 months to finish, he said.

More money also must be identified, since the cost is expected to go beyond the $50 million allocated by the Wilson Foundation.

That's not surprising: The Wilson Foundation in its work in Western New York and Southeast Michigan seeks partners committed to contributing to and sustaining the projects the philanthropy invests in.

Here are the bigger changes envisioned in the concept design:

Lagoon: Van Valkenburgh said he was struck on his first visit to the park last fall by the limited access to the water.  Plans are to soften the shoreline and create a lagoon.

Renderings show terraced stones for walking on and sitting near the water's edge. A kayak launch is also planned. Buffalo Niagara Waterkeeper and other groups are helping in the planning process.

Great lawn: The new topography will make a portion of the park suitable for large outdoor concerts, with a place for a temporary stage and electrical service.

The hill for sledding and watching sunsets will rise over the train tracks near the park at a height of 25 feet.

Playground: A major playground, yet to be designed, will be located in the center of the park.

"It will draw people in," Van Valkenburgh said.

For parents, one can be with a soccer player and the other with the kids on the playground and still remain in the same area.

"Playgrounds are a magnet for all kinds of people," he added.

Plantings: "The trees there are really in poor shape," Van Valkenburg said. "There will be a major replanting of shade trees, but we are also looking to do a big push for plants that bloom in early April and early May to make it a spectacle," he said, suggesting apple blossoms and cherry blossoms as part of the mix.

"This is going to be an area for people who are looking for quieter activity that complements the active sports elsewhere in the park," Van Valkenburgh said.

Pedestrian bridge: Van Valkenburgh said feedback made clear the current pedestrian bridge over the highway doesn't feel safe, has poor sight lines and isn't designed well for people with mobility impairment, including the use of wheelchairs.

A new bridge would be located slightly north and originate on the West Side at a park on 4th Street.

"We see the park as a gateway to the city and a gateway to America, really," Van Valkenburgh said. "The bridge has the opportunity, coming in from Canada, to be a welcoming landmark."

The bridge will split into two directions in the park. One will lead toward the lake, the other toward new soccer fields and on to the rest of the park.

A wall is also planned on the park's eastern border to deaden the sound from the highway.

Some of the ideas for the park were informed last year by around 400 people who attended public meetings. Nearly 1,200 surveys were filled out. Youngsters from the Belle Center were enlisted to take pictures and write about the park.

Public feedback led organizers to conclude the sports fields, dog park and family cookout facilities should remain at the park but with enhancements.

Focus group members visited three out-of-state parks to expand their sense of what is possible at LaSalle.

"It really gave us some ideas of what we could do in Buffalo that we were below the bar on," Escobar said.

Escobar liked the elevation changes that made it feel like there were different areas of the park to experience.

"We talked about using the views that are there on the waterfront," Escobar said.

Escobar said he's been pleased by how the process has worked.

"The architects and the organizers have done a really good job of engaging people and giving them a chance to give their viewpoints," he said.

Those viewpoints have helped guide the process, said Bob Shibley, dean at the UB's School of Architecture and Planning, of which the Regional Institute is part.

"I think the community, right down to the kids from the Belle Center, brought us a very sophisticated understanding of the strengths of the current park, its limitations and its potential," Shibley said.

"Having the focus group make these trips and then relate their findings to their own critique of the park elevated the conversation and the clarity of aspiration," he said.

Malcolm, the LaSalle Focus Group member, said focus group members agreed on what they want in the park.

Malcolm uses the pavilion at LaSalle Park for her annual music event, as do other groups such as the Puerto Rican and Hispanic Family Day Parade of WNY. She is concerned what the event space will be like if it's no longer there, but she is also believes in the process.

She's pleased the focus group is representative of the community and park users, and appreciates the community engagement that has taken place.

So does the mayor.

"The Wilson Foundation, Van Valkenburgh and the city have gone to great lengths to have this be a community-driven process in many ways, where the public can inform how the design comes together," Brown said.

"Ultimately, this will be a world-class redesign of Ralph C. Wilson Jr. Centennial Park that the residents of Buffalo and Western New York have helped to drive," he said.

Deborah O'Shea, a longtime Waterfront Village resident and member of the focus group who lives on the edge of the park, is encouraged by what she's heard.

"I am excited and looking forward to many of the thing that are conceptually planned," O'Shea said.

But while O'Shea is excited about the big ticket items, she is also concerned about whether "the basics" will be taken care of after the park is finished.

"If you put in all those great amenities but there is no lighting, no safety and no maintenance, then you are throwing money away," she said.

Tighe said a management plan is on the Wilson Foundation's radar.

The Foundation allotted $10 million sustainability endowment for both the park and trails projects to ensure their maintenance and upkeep.

A lagoon is planned for the southern end of LaSalle Park.