Monday Night Football: Scores and updates from Saints vs. Buccaneers

That is the question at the heart of a legal battle among three downstate investors that has left the future of the landmark downtown complex in limbo and put its ambitious redevelopment on hold.

Two different people claim ownership and leadership of Landco H&L, the building's longtime owner. One of those owners sold the AM&A's building, while the other says that was unauthorized. And the purported buyer says she's already invested millions of dollars since February, but is now stuck in flux.

It is a critical issue for lenders and investors, who have provided cash or have been asked to loan money for the project but are no longer sure who is in charge. One investor from China has a separate lawsuit, claiming she was defrauded.

The stakes are high for city officials – and neighbor M&T Bank Corp. – in their efforts to revive the long-vacant building and reopen a section of Washington Street that has been closed because of the building's deterioration.

The only work that can proceed – under a court-approved agreement among the parties – is to fix the underground utility “vault” below Washington Street that has kept part of that road closed for more than two years. That city-ordered work – which involves filling in the gap and constructing two retaining walls underground  – is being performed by Savarino Companies.

"Our priority has been getting Washington Street open," said Louis Petrucci, Buffalo's deputy commissioner of permit and inspection services.

The legal fight revolves around a $2 million sale of the building in late January from Lily Li's Landco H&L to a new investor group, Elena Fu Yiyao's 377 Main Realty, and whether Li actually had the authority  to sell it. It reveals an internal power struggle within the  group that has controlled the building for the last six years, and the difficulty they had bringing their plans to fruition.

But the fight – which began in February but has been delayed by the pandemic – also puts any new financing and development plans by Fu in jeopardy.  No court hearing date has been set, nor has a state judge acted on contrary requests for a preliminary injunction and a motion to dismiss.

The various parties had tried to negotiate a resolution, but 377 Main Realty couldn't agree to any restrictions on further liens on the property because it needs to refinance its current loan before it matures early next year.

That prompted Fu and her attorney in late July to ask a judge to lift a six-month-old temporary restraining order so she can proceed with her new project. Plans call for converting the building to offices and apartments or condominiums, instead of a Wyndham hotel – a change that has been applauded by city leaders.

"The apartments and commercial space seem to fit more at this point in time," said Brendan Mehaffy, executive director of the city's Office of Strategic Planning. "We obviously see that there is a demand for people to live in the downtown area."

In an affidavit, Fu said that, since the closing in January, she has "invested a substantial amount of funds to improve and renovate the property and to market it for rental," including by hiring a broker , installing internet service and hiring an architect to develop plans. But she can't obtain additional financing to continue the project or even maintain the property while the injunction request is pending.

And she argues that the dispute is really a Landco internal matter. "I simply had no knowledge that there apparently was an internal dispute over the ownership of Landco," Fu wrote.

The ownership question also is important for the U.S. Army Corps of Engineers, which was negotiating to occupy two floors of the building and 57,000 square feet of space under a new lease with Fu's company. Now – with the restraining order in effect, and one of the parties still seeking to reverse the ownership change – those lease talks are up in the air.

The fight involves one of Buffalo’s oldest and best-known downtown buildings. The historic 10-story building at 377 Main St. was the longtime home of retailer Adam, Meldrum & Anderson Co. until that company was acquired by Bon-Ton stores in 1994, with the Main Street store closing a year later. Aside from its brief use as an upscale women’s department store in 1998, it has been vacant ever since, with multiple owners.

It was purchased in late 2014 by Landco H&L, a Chinese and American investor group based in Flushing, Queens, led by Li “Lily” Li. Working with local engineer John Schenne, the group unveiled plans for a $70 million makeover, initially into an unbranded 300-room hotel for Asian tour groups visiting Niagara Falls.

That plan for the 375,000-square-foot building later shifted into a general-purpose Wyndham Buffalo Hotel.

The change came along with new leadership and control of the project, which moved from Li to Jinneng “Bally” Bao and Xiaomei “Sally” Lu, a couple that live in Glen Cove, N.Y.

According to court documents – filed as part of a lawsuit in State Supreme Court – Li transferred her shares in Landco to Lu in December 2015. According to 377 Main Realty, Lu was required to pay $300,000 as a down payment to Li, and then either $2 million in four equal $500,000 installments every six months or $1 million when Landco obtained $4 million in financing. Lu was also barred from transferring more than half of Landco's shares without Li's consent.

But six months later, Lu transferred those shares to her own entity, Buffalo Hotel Management. This is where the conflict starts.

The agreement included a provision that 51% of those shares would revert back to Li if Lu breached the contract or “failed to perform.” Li asserts that is what happened, without giving details, and she filed papers with the state listing her as president. But Lu denies that she breached the agreement, and claims she remains the sole owner of Landco.

In her lawsuit, Lu says she has “invested millions of dollars into the remediation and renovation of the property.” She adds that she is “working with investors, business partners and others to bring this project to fruition,” and is seeking historic tax credits that she expects to close on “before long.”

It hasn't been smooth. Landco completed the yearslong, multimillion-dollar asbestos cleanup and environmental remediation of the building . Along the way, it battled with its two asbestos contractors, and has liens against it for remaining bills. It fought with the city over the vault repairs. And it struggled to overcome financing challenges, even defaulting on its mortgage from the prior owner and triggering a foreclosure filing until it cleared that debt.

Landco asserted that Li had improperly claimed to be its president, when she was not even an officer, director or shareholder. It also claimed that 377 Main Realty “should have known” that Li lacked authority, but sought to “gain an advantage.”

Justice Paul B. Wojtaszek granted a restraining order and set a hearing for March 11, but the Covid-19 pandemic delayed court action and further filings for several months.

Fu's 377 Main Realty denied the assertions and said Landco's claims violated the deed. It asked for a declaration of its sole ownership, a lien and damages of $2 million.

Cao said she invested $500,000 into the redevelopment project in early 2017 under the federal EB-5 immigrant visa program. That program enables qualified foreign investors to get permanent U.S. residency by supporting commercial projects that create at least 10 jobs.

But after Cao applied for immigration, she said, Lu and Bao asked her to loan them another $6.5 million to save the project and her “green card,” which she did in September 2017.

The project since faltered, and her immigration application was denied in November 2019 because federal officials questioned the project’s business plan and jobs. She said Lu and Bao admitted that her loan was used for other projects, but they would not repay her $7 million.

A new plan is in the works for the long-vacant AM&A's department store on Main Street.

The goal is not only to meet a need for more affordable housing in the area, but to help those dealing with substance abuse to gain confidence and skills for independent living.

Work is finally underway on repairs to the utility vault underneath Washington Street in front of the former AM&A's department store, pote…

The Army Corps will relocate its headquarters and 250 employees to 55,000 square feet of space on the third, fourth and fifth floors.

The anticipated reopening of a portion of Washington Street in downtown Buffalo will have to wait a little longer.

The southbound portion of Washington between Eagle and Clinton has been closed to traffic because the structural framework under the surface had deteriorated to the point where it could no longer support cars.

A little-known 30-year-old federal program that has pumped more than $100 million in funding into projects across Western New York is in limbo.

The NCIDA cited a lack of progress on the project and a failure by the company to pay even its reduced property taxes to three jurisdictions, totaling $10,000 so far.

Five years ago, Weiping Cao thought she had found a way to obtain an immigration "green card" to come to the United States as a permanent resident.

The Chinese owners of the AM&A’s building in downtown Buffalo have brought in more than $2 million in additional foreign capital to their redevelopment effort, providing more reassurance to their lender and tax credit investor on the project. Queens, N.Y.-based Landco H&L, a group of investors from both the United States and China, is in the midst of a

When contemplating the seemingly endless quest to develop the former AM&A’s department store building in downtown Buffalo, one imperative emerges: Get on with it. A recent Buffalo News story detailed a number of government investigations surrounding a Chinese investment group’s $70 million redevelopment of the 10-story complex. Representatives from state and federal environmental and labor departments, as well as

While city officials say the building is now clean, the structure’s future is still

Editorial: AM&A’s is an unsightly obstruction

The real estate firm that holds the mortgage on the AM&A’s complex downtown is now seeking to foreclose on the property, accusing the Chinese investment group that currently owns the building of defaulting on the

The former AM&A’s store is being converted into a 300-room hotel, along with two first-floor restaurants – one Chinese, one

This historic crown is being readied for King Charles's Coronation Day

This historic crown is being readied for King Charles's Coronation Day 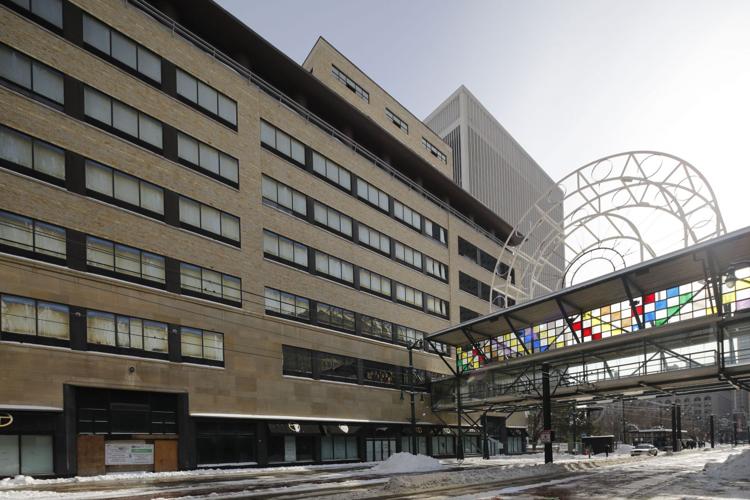 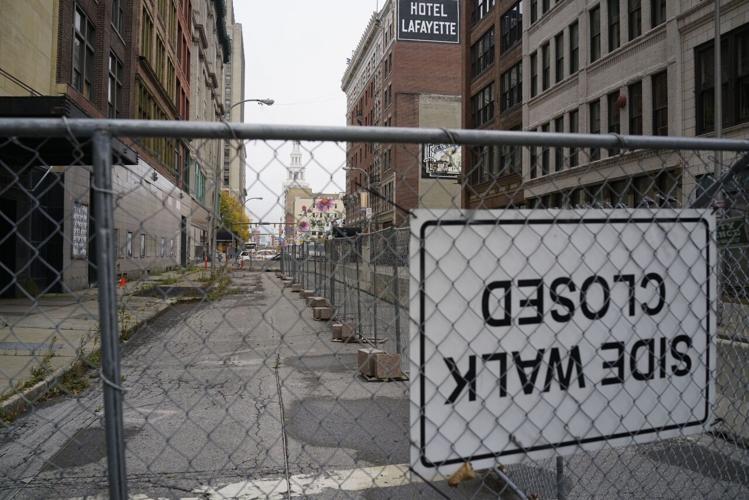 Fencing around the former AM&A's department store has half of Washington Street blocked off to traffic. 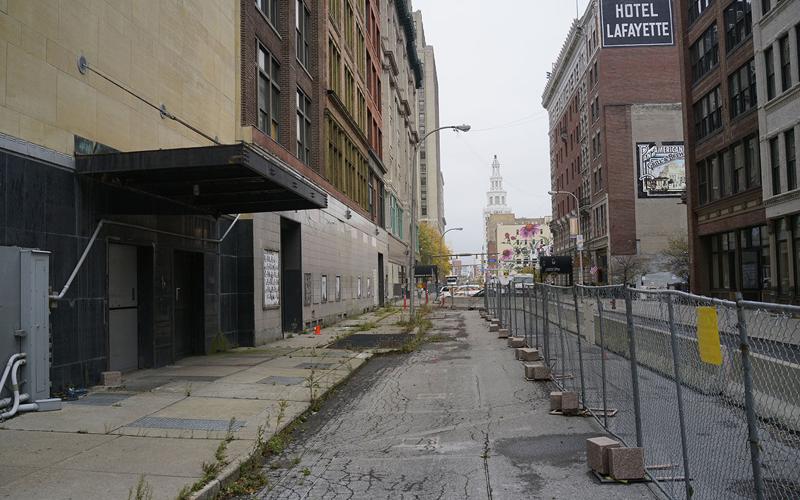 Fencing around the former AM&A's department store, which is in the midst of a conversion into luxury apartments, has half of Washington Street blocked off to traffic.