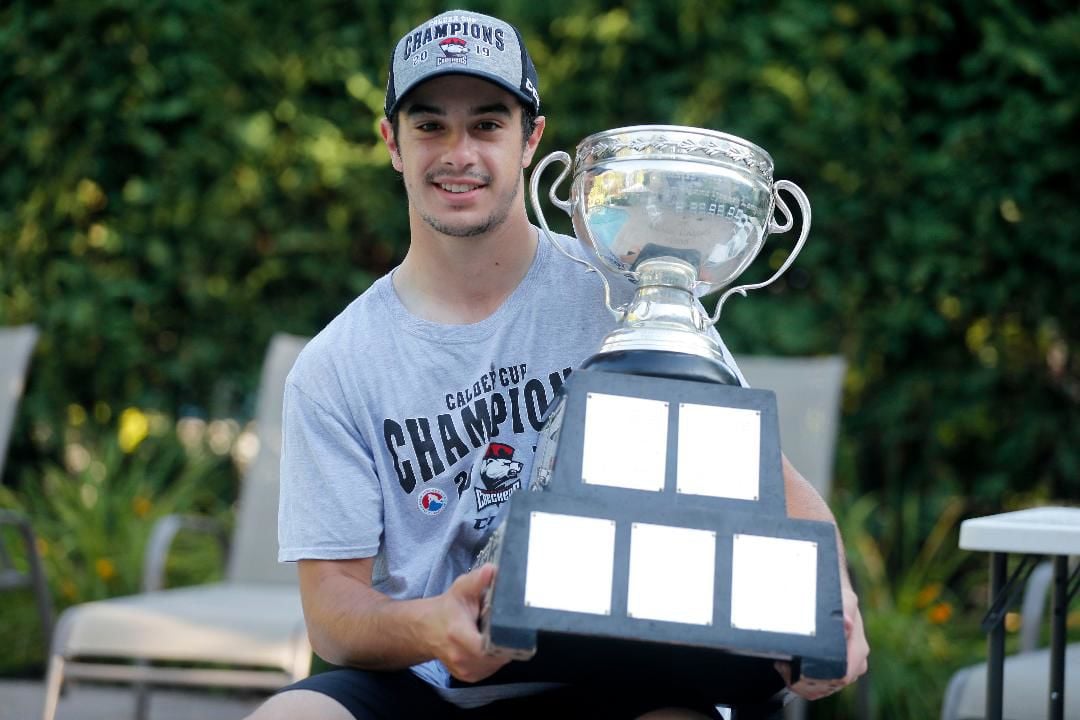 Andrew Poturalski in Snyder Monday with the Calder Cup. Poturalski's Charlotte Checkers won the American Hockey League championship and he was MVP of the league finals. (Mark Mulville/Buffalo News) 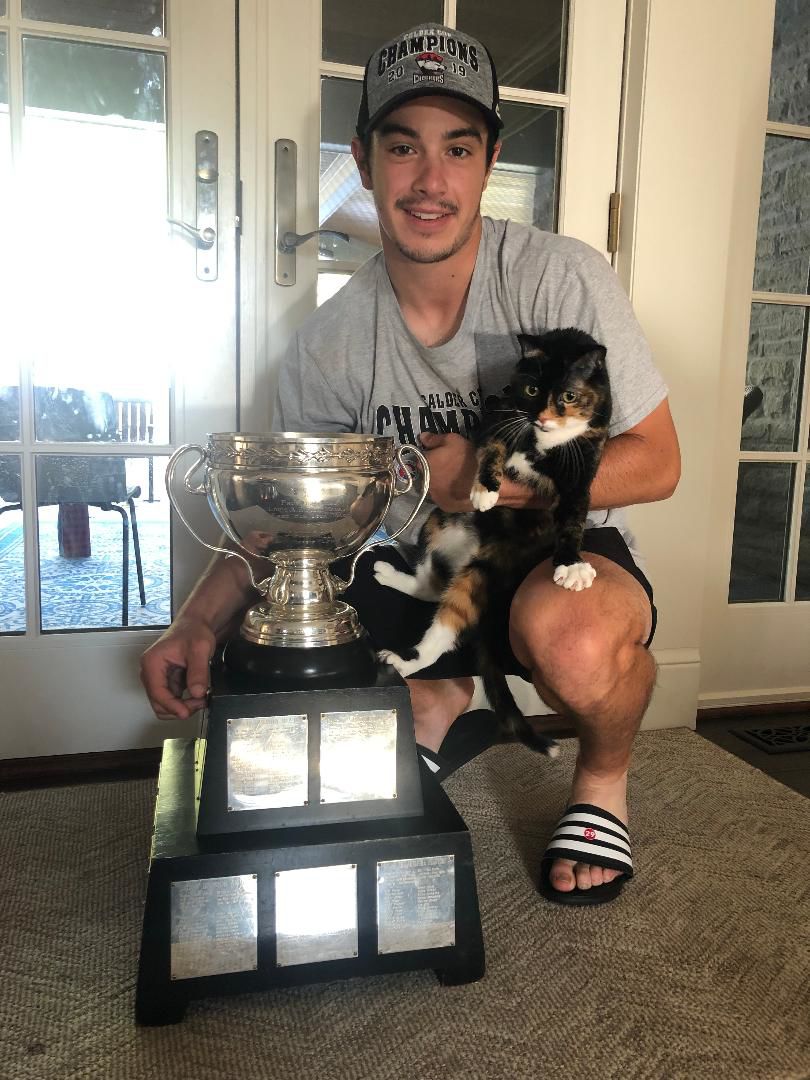 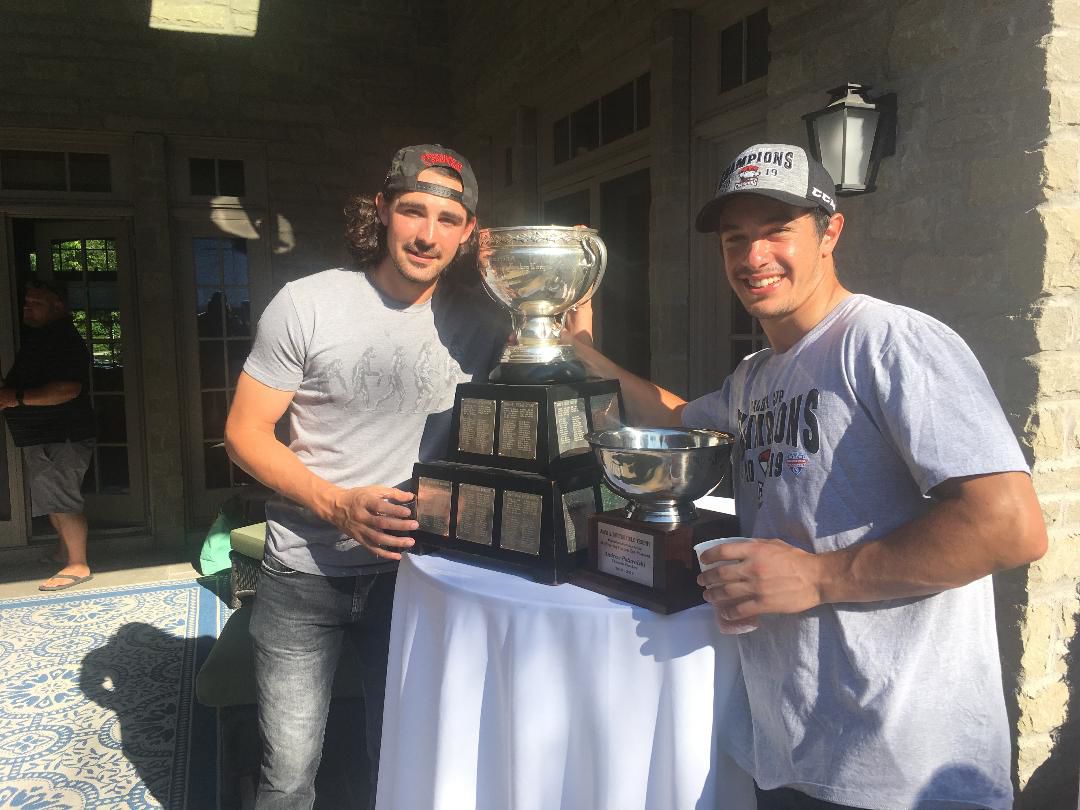 Andrew Poturalski (right) and Trevor Carrick on Sunday in the Fromen back yard in Snyder, with the Calder Cup. (Sean Kirst/The Buffalo News) 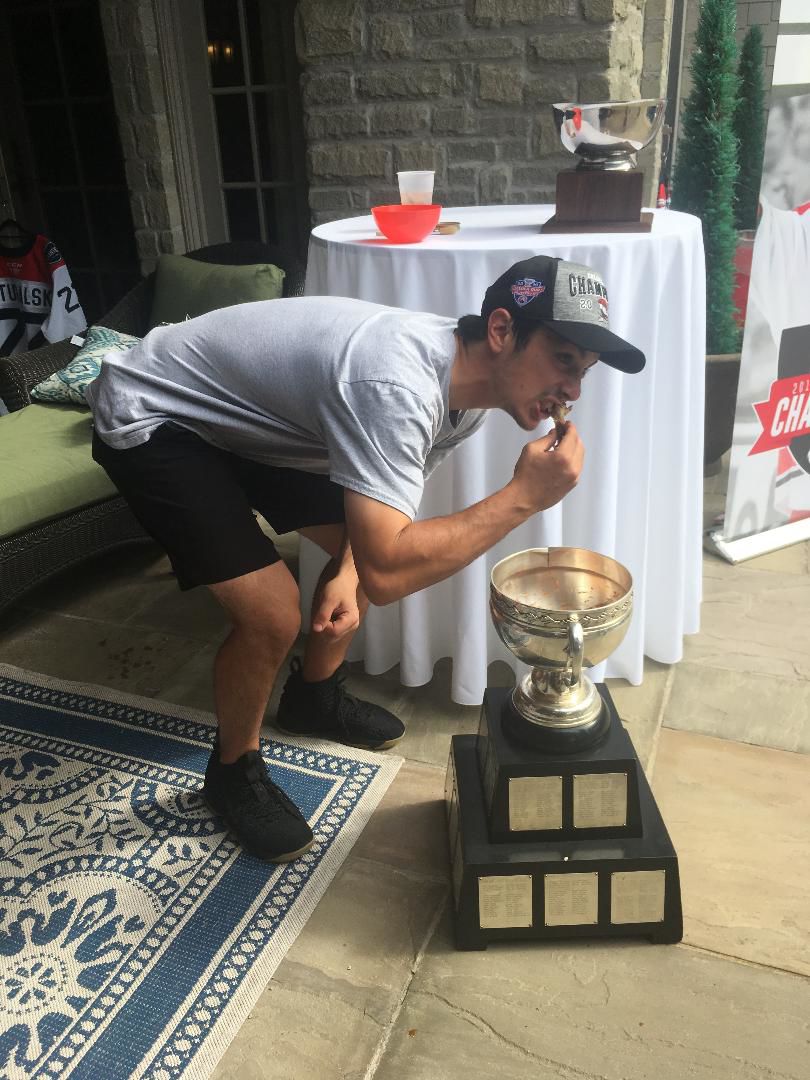 The crossing into Canada was not a problem. Earlier this month, Canadian customs officers barely seemed to notice the old trophy sitting on the front seat next to Donny White, equipment manager for the Charlotte Checkers.

Their American counterparts responded differently. White returned early Sunday from Ontario, and he said a customs guy expressed plenty of curiosity about that big silver bowl.

“It’s the Calder Cup,” White replied, explaining he was on his way to Snyder, where one of the most famous trophies in hockey would serve as a receptacle for championship-level chicken wings.

There was a time, before the creation of the National Hockey League's Buffalo Sabres, when the trophy held powerful meaning for local hockey fans. Created 81 years ago and named for pioneering NHL president Frank Calder, today's Calder Cup – a sterling silver replacement for the original – is emblematic of supremacy in the 31-team American Hockey League, a top-level minor league to which the old Buffalo Bisons belonged until 1970.

White ended up Sunday at the home of Lexie and John Fromen, whose daughter, Haley, is engaged to Williamsville's Andrew Poturalski, 25, a guy she has dated since they attended Nichols School. That was also the last time Poturalski recalls winning any kind of championship before what happened in June, when his Checkers defeated the Chicago Wolves in five games for the AHL title and the Calder Cup.

For his play at center, he was named MVP of the playoffs, symbolized by the Jack A. Butterfield Trophy – a separate award that Poturalski, Haley and friends used as a popcorn bowl Sunday night.

At the party, the Fromens served Ted's hot dogs and chicken wings from Bar Bill Tavern in East Aurora, wings routinely ranked among the best on the Niagara Frontier. "Everyone has their traditions, and I wanted to do something that was special to Buffalo," said Poturalski, whose plan involved eating wings from the cup.

He has been signed by the Anaheim Ducks organization, and he and Haley paused this summer to buy a home near Buffalo – "You always want a place to come back to," Haley said – before heading to California in the fall. Poturalski's mission is a career in the NHL, where he spent a couple of games two years ago with the Carolina Hurricanes.

With the Calder Cup, Poturalski learned of its meaning in the most intimate way.

“To be honest, I didn’t know all that much about it,” Poturalski said of the years before he played in the AHL. He grew up in Buffalo, focused on the Sabres and their quest for the Stanley Cup. His parents remember taking him as a preschooler to games downtown, where his mother, Diane Poturalski, realized something was a little different.

At a time when most kids were interested in Sesame Street, “he’d watch the entire game,” she said.

To host the cup for a day is a time-honored AHL tradition, enjoyed before Sunday by only a few players with Western New York roots, a ritual similar to how every player on an NHL championship team gets to spend time with the Stanley Cup. The Checkers sent the Calder Cup by overnight delivery to players who live out West, while White – a Cincinnati resident – was recruited for a wandering journey of more than a week to deliver it to the guys in the East.

Several players took it golfing, as Poturalski did Sunday morning, with 15 friends and relatives at the Country Club of Buffalo. Defenseman Trevor Carrick, for his part, had what he called a "parade" in Goodwood, Ont., population roughly 600, a tiny community that is setting and inspiration for the "Schitt's Creek" comedy series.

Carrick borrowed his uncle's Jeep and did a one-car afternoon procession through the middle of the quiet town, holding the cup in the air and screaming happily.

Sunday, he drove five hours to be with the buddy everyone calls "Pots" or "Potsy." They recalled how another teammate served a pig roast from the cup, and Poturalski came up with a regional objective.

In Buffalo, he had to fill it up with wings.

The Fromens, feeling the history, invited Joe Crozier, the former Sabres coach who won three Calder Cups while coaching the Rochester Amerks, but he was not feeling well and his family regretfully declined. Other local hockey legends were on hand, such as Peter Scamurra, who reached the National Hockey League and coached and mentored the young Poturalski when he played with the Wheatfield Blades.

Scamurra described Poturalski as the kind of player “who was always the first one on the ice and the last one off,” a kid who would exhaust himself in practice and then skate into the night in the coach's backyard.

"He had a nose for the net," Scamurra said, "and that's something you can't teach."

Like many at the gathering, Scamurra had vivid memories of what happened 50 years ago this coming season, when the Bisons brought the cup home to Buffalo in their final year of existence, for their fifth and final championship just before the birth of the Sabres.

Joe Poturalski, Andrew's father, said his own parents ran a catering service involving Polish specialties. Every Sunday during his childhood when the Bisons were at home, after they brought food to whatever shower or party they were handling, the Poturalskis would hustle to the old Memorial Auditorium to settle into the blue seats and watch the hunt for the Calder Cup.

Almost a half-century later, Joe set up a digital package so his mother, Monica, who is having vision problems at 83, could sit on the edge of her coffee table and watch her grandson play. While Joe could not make it to Chicago for the final game, Diane Poturalski, Andrew's mother, was in the stands to savor the moment when her son raised the cup over his head.

[Sean Kirst: For Sabres legend Joe Crozier, there was glory in coaching – and in stepping away]

To her, for both Andrew and his younger brother, Mike, that matters more than any Calder Cup.

Still, she had to agree: Sunday was one sweet deal. Haley spoke of how Poturalski severely cut his hand on their "taco night," deep into the season – while they laugh about it now, it was not so funny then – and later broke several bones in his foot, yet still gutted it out until his team won it all.

She has known him since they were teens, when all their friends killed time in the Fromen basement. Ask Haley to define Poturalski, and she tells the story of their cat, Charlotte. A few years ago, Poturalski and roommate Haydn Fleury, now of the Hurricanes, wanted a pet, so they quietly went to a shelter and picked out a rescue.

Talk about an upgrade. Not only does Charlotte now have a personal Instagram account, but the cat posed Sunday with paws on the Calder Cup.

"I've watched this kid grow up and become an adult, and I've seen the way he's acquitted himself," John Fromen said. "There's nothing I wouldn't do for him, and I'll tell you this: There's no one (else) I'd rather see marrying my daughter."

Fromen expressed that gratitude Sunday in many ways, including boxes of Bar Bill Tavern wings all the way from East Aurora. Poturalski put a pile of them in the Calder Cup, shook it around with that get-the-sauce-properly-distributed-snap that was all but born into him, then shared the results with Haley, Carrick and a crowd including Myles Fee, a new Sabres video coach and a former Charlotte teammate.

As for the AHL playoff MVP, he lifted a chicken wing from that legendary cup and took a bite, surrounded by the people who matter most to him, offering an immediate appraisal that pretty much spoke to everything in life, at that moment.

For the fully vaccinated, a mask milestone arrives. For everyone else, wariness awaits.

Starting Wednesday, New York State will no longer require fully vaccinated residents to wear masks outdoors or in many indoor settings, but that doesn’t yet mean that face masks are going away.

Learn about the new rules in New York, such as masks will still be required on public transit, in nursing homes, health care facilities, schools, homeless shelters and correctional facilities.

Andrew Poturalski in Snyder Monday with the Calder Cup. Poturalski's Charlotte Checkers won the American Hockey League championship and he was MVP of the league finals. (Mark Mulville/Buffalo News)

Andrew Poturalski (right) and Trevor Carrick on Sunday in the Fromen back yard in Snyder, with the Calder Cup. (Sean Kirst/The Buffalo News)