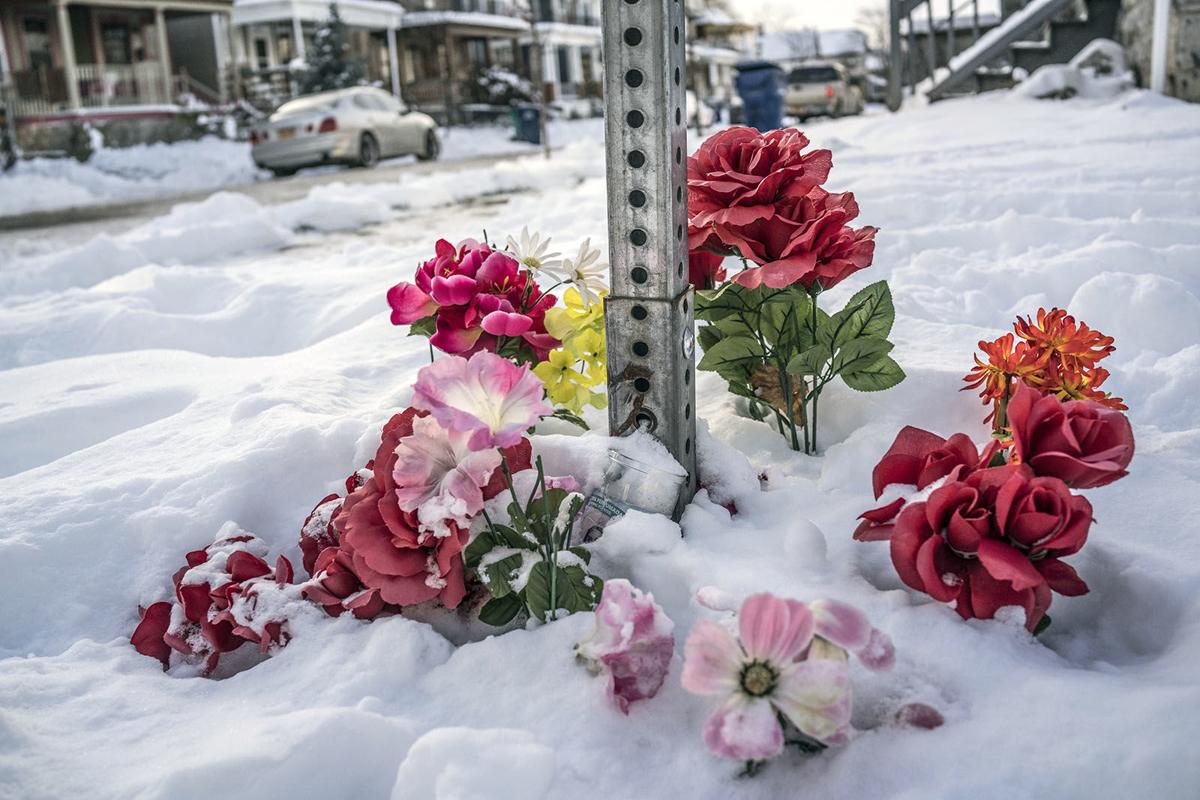 A memorial at the intersection of Hoyt and Arnold near where Wardel "Meech" Davis died on Feb. 7 as he was taken into Buffalo Police custody, Wednesday, Dec. 13, 2017. (Derek Gee/Buffalo News) 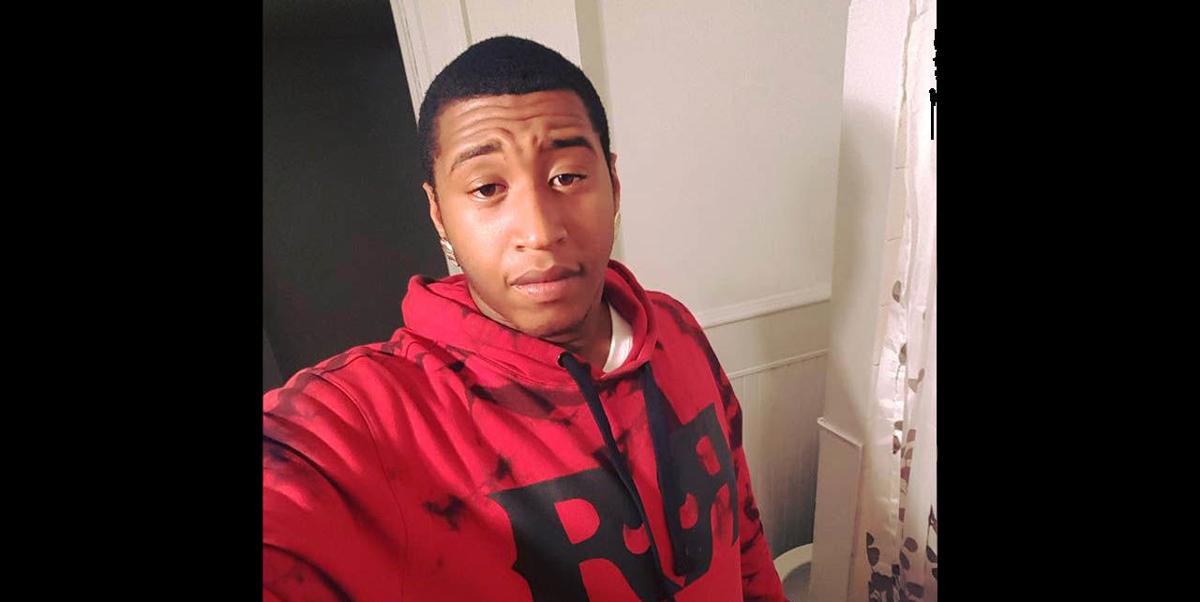 Wardel Davis, 20, of Buffalo, died shortly before midnight Feb. 7, 2017, after he stopped breathing while being arrested by Buffalo police. This photo was provided by his girlfriend, Jashalyn Washington.

Two Buffalo police officers who were arresting Wardel Davis, a 20-year-old unarmed African-American man, when he died will not be charged in connection with his death, Attorney General Eric T. Schneiderman announced Wednesday.

Its report identified policies of the Buffalo Police Department and the Erie County Medical Examiner's Office that the AG's Office said were in "real need of reform," however.

The investigation found that Davis died Feb. 7 of an acute asthma attack exacerbated by physical exertion from when he struggled with the officers. The officers have been on paid administrative leave since the death.

“The death of Wardel Davis was a tragedy, and we send our deepest condolences to his family and loved ones,” Schneiderman said in a statement. “Our extensive investigation uncovered policies in real need of reform by the Buffalo Police Department and the Erie County Medical Examiner. These systemic issues must be swiftly addressed.”

The Attorney General's Office took over the investigation into the death, based on a 2015 executive order by Gov. Andrew M. Cuomo authorizing the attorney general to handle police-involved deaths of unarmed civilians. The goal is to try to provide an independent and transparent process. The probe was led by Chief Deputy Attorney General and Chief of the Special Investigations and Prosecutions Unit Alvin Bragg.

A 61-page report on the 10-month investigation released Wednesday found:

The investigation took 10 months and included interviews with 22 Buffalo police officers, two autopsies, multiple canvasses of the neighborhood and a review of 1,800 pages of Davis' medical records. During the canvasses, investigators found no eyewitnesses to the struggle between Davis and the police officers.

The AG's office also uncovered shortcomings with how the Buffalo Police Department handles evidence collection and documentation. "For example, the officers' radio and flashlight were picked up before being properly documented or photographed and half of Mr. Davis' jacket was never recovered," the report said. Seeking accreditation through a state-run program would help improve "some of the deficiencies" investigators noted. Last week, the Buffalo Police Department appointed a lieutenant to head the accreditation seeking process.

The report also noted that body-worn cameras would have "greatly facilitated the investigation of this case." The report encouraged the department to outfit as many officers and vehicles as possible with cameras.

The recommendation about the Medical Examiner's Office came after the Attorney General's Office said the medical examiner insisted "on speaking with the officers before making a scientific conclusion about cause and manner of death."

The report continues: "Even more worrisome, the Medical Examiner stated to investigators that if the officers did not meet with her, she would deem the cause of death to be “positional asphyxia.” The independent expert concluded that Davis’ death was not positional asphyxia, the Attorney General's Office said.

Erie County officials said they stand by the medical examiner's decision "to seek interviews with the officers involved in Mr. Davis’s death, which is standard practice among forensic pathologists. A complete forensic report and analysis relies not just on a physical examination of the body, but on a complete understanding of the circumstances surrounding a death including eyewitness accounts.”

One unnamed witness said he drove by after Davis was on the ground. On Feb. 10, he told Buffalo homicide investigators that he saw a handcuffed man lying on the ground and two police officers "just standing there." Five days later, he was interviewed by attorney general investigators and gave a different account. He said he saw one officer on his knees with his arms out in front of him on the ground and a second officer lying "across the guy who was on the ground." Investigators also obtained two videos taken at the scene by civilians. Neither showed the confrontation and both showed resuscitation efforts being taken on Davis, one before an ambulance arrives and one after.

Buffalo police officials put out a brief statement about the report: "We thank the Attorney General's Office for their complete and thorough investigation into this matter. We are in the process of reviewing the report at this time. Our internal investigation is proceeding."

Representatives of the AG's Office met with Davis' grandparents Wednesday morning. The Buffalo News' attempts to contact the grandparents were unsuccessful.

Thomas H. Burton, the Buffalo Police Benevolent Association attorney who represented McAlister said the report confirms that his client and Parisi did nothing wrong.

"It is now clear as the newly driven snow that there was no criminal conduct by either of the officers involved which has been unrefutable from day number one," Burton said. "The only question from our end is why it took 10 months to clear these two officers."

Burton said it was his understanding that Buffalo Police Commissioner Daniel Derenda is now evaluating whether the officers should go back to work. "And based on this report there is no reason for them to not go back to full duty in prompt fashion," Burton said.

On the night of Feb. 7, McAlister and Parisi were on a special detail to patrol crime spots and respond to quality-of-life complaints in the neighborhood when they saw Davis, 20, coming out of a house at 19 Hoyt St. on the city's West Side, police officials said. Police records also show that in the previous 10 years, police have been to 19 Hoyt more than 250 times, either in response to 911 complaints or after observing suspicious activities while on patrol. The investigations at the residence have included loud music, threats, irrational individuals, narcotics and weapons.

The officers knew Davis and had arrested him previously on minor drug possession charges three months earlier, records show. Davis was scheduled to appear in court the next day on those charges.

When the officers went to handcuff him, police officials said, Davis tried to flee, and a struggle ensued. Parisi said he punched McAlister several times and placed his "head and neck in the crook of his arm," the report said. After the officers handcuffed Davis, they realized that he wasn’t breathing. He was pronounced dead at Buffalo General Medical Center.

His fiancee, Jashalyn Washington, said Davis was sick with a bad cold on the night he died and that they were planning on going to the emergency room. But she also said he was strong and healthy and regularly played full-court basketball with his friends.

Davis' death, which came amid increasing attention to the deaths of unarmed black men by law enforcement officers around the country, prompted a series of protests in February outside the Buffalo Police Central District office. Demonstrators also interrupted Mayor Byron W. Brown's State of the City speech at the Buffalo Niagara Convention Center.

The mayor's office said Wednesday that Brown was reviewing the report and had no immediate comment.

Cuomo authorized the AG’s Office to investigate all unarmed citizen deaths involving police in 2015 following a public outcry after a grand jury in Staten Island declined to indict the police officer involved in the death of Eric Garner, an unarmed man whose arrest was captured on cellphone video.

Since then, the AG's Office has investigated 13 cases. Seven have been closed. Two cases have resulted in criminal charges against law enforcement officials, including the indictment of Joel Abelove, the district attorney in Rensselaer County, who was charged with a single felony count of perjury and two counts of official misconduct. That case stemmed from the death of a 37-year-old black man, Edson Thevenin, who was shot and killed by the police during a traffic stop in Troy on April 17, 2016.

On Tuesday, in anticipation of the attorney general's announcement, Black Lives Matter-Buffalo, a coalition of community activists and attorneys, called for the Attorney General's Office to prosecute the officers involved in Davis' death. Last week, Schneiderman's office launched a separate investigation of the Buffalo Police Department's use of traffic checkpoints and enforcement sweeps inside public housing developments in response to a complaint filed by Black Lives Matter-Buffalo. The group linked those practices, which they say unfairly and unconstitutionally target communities of color, with Davis' death, as well as that of Jose Hernandez-Rossy, who was fatally shot by a police officer in Black Rock in May.

Before the AG's announcement was made, Washington said she hoped that the officers would face criminal charges but "worried that it isn't going to happen."

"I still think about him every day," she said Wednesday morning. "He's someone I really cared about."

It's at least the third time the 96-foot-tall monument to President William McKinley has been damaged since Black Lives Matter protests erupted in late May.

A memorial at the intersection of Hoyt and Arnold near where Wardel "Meech" Davis died on Feb. 7 as he was taken into Buffalo Police custody, Wednesday, Dec. 13, 2017. (Derek Gee/Buffalo News)

Wardel Davis, 20, of Buffalo, died shortly before midnight Feb. 7, 2017, after he stopped breathing while being arrested by Buffalo police. This photo was provided by his girlfriend, Jashalyn Washington.