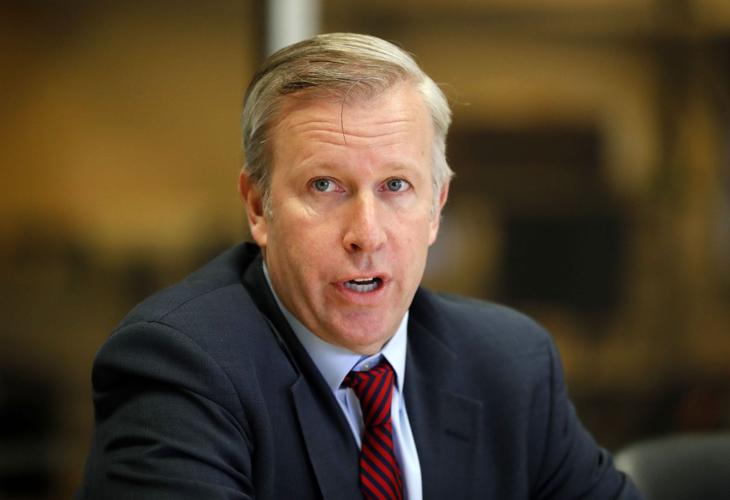 A sign in the Byrncliff Golf Club in Varysburg gives away where the WNY Republican party leaders are meeting Saturday to determine who will be their candidate for the 27th Congressional District. (Robert J. McCarthy/Buffalo News)

Republican party chairs from eight county organizations met at the Byrncliff Golf Club in Varysburg over seven hours Saturday before finally settling on Jacobs in what was termed a close call over a fellow state senator – Robert G. Ortt of North Tonawanda.

"While there was strong support for two candidates, Mr. Jacobs had the most votes," state Republican Chairman Nicholas A. Langworthy told reporters.

Erie County Republican Chairman Karl J. Simmeth Jr. stood with the district's seven other chairs in a show of unity after the selection was announced.

It was a situation the leaders never anticipated in New York's most Republican district. But from the moment Collins was indicted Aug. 8, 2018, on insider trading charges, they've had to deal with a bevy of potential candidates seeking to replace the disgraced former congressman.

On Saturday in the bucolic hills of Wyoming County, it ended – for the moment anyway.

The winner of the special election will serve out the remainder of Collins' term, which runs though the end of this year.

Republicans, however, could resume their intra-party battle to determine who gets the nod to then seek a full two-year term for the 27th District seat. A primary would be held June 23 to determine candidates for the Nov. 3 election.

While Ortt, Stefan I. Mychajliw Jr. and a new candidate  – White House aide Jeff Freeland – all said they will consider their options, former Darien Town Justice Beth A. Parlato vowed to continue her campaign in the June primary. That could set up a major intra-party battle as both try to sell the deep-red district on their conservative bona fides.

The Republican leaders in August 2018 initially interviewed candidates for the 27th District after Collins announced he would not seek re-election following his indictment. But Collins then opted to run, and narrowly defeated McMurray in the November 2018 election. Less than a year later, in September 2019, Collins stepped down before pleading guilty in federal court to launching an insider trading scheme. He was sentenced Jan. 17 to 26 months in prison.

"But at this time we need a steady hand at the wheel to return our voice to Congress," he said, and emphasized that the solid lineup of eight leaders behind him underscored unity behind the Jacobs candidacy.

Jacobs, a former member of the Buffalo Board of Education and former county clerk, emphasized his ability to win over the years as a Republican in Democratic Erie County. He said Saturday that was his main message to the county leaders.

But the show of support late Saturday belied the strong criticism of the process and the people behind it by Mychajliw.  The Erie County comptroller acknowledged his slim chance of gaining the party nomination for a special election, but following his interview he lashed out at what he encountered at the golf club.

Mychajliw charged that "no reasonable person" could expect a fair decision when Langworthy's wife works as a fund raiser for Jacobs.

"The process is compromised by the fact that the state chairman's wife is on the payroll of one of the candidates," Mychajliw said. "A reasonable person could infer the fix is in."

Mychajliw also zinged secret deliberations orchestrated by the leaders on Saturday, which were only revealed by knowledgeable (but not party) sources early in the morning. Though he acknowledged that state election law has saddled the leaders of the district's eight county chairmen and chairwomen with the responsibility of finding a candidate, he bristled at their behind-closed-doors efforts.

"I was very blunt and direct," he said, specifically mentioning Simmeth and Langworthy, who were both in the room. He also said the process should have been conducted in public.

The Buffalo News reported in October that Erin K. Baker, Langworthy's wife and chairwoman of the Erie County GOP's fund raising efforts, worked in a subcontractor capacity for a firm seeking contributions for Jacobs. Langworthy, the former Erie County chairman, said at the time he would not be involved in choosing the candidate and would only facilitate the process.

“My husband has always respected me as an independent political professional and my clients do as well,” Baker said then. “Last I checked, it was 2019 and I highly doubt this would be an issue for a man.”

And on Saturday, Langworthy reiterated what he has always maintained -- that his role in the special election process was only as "facilitator."

"I did not ask one single soul in this room to support a single candidate," he said, calling Mychajliw's charges "petty."

"When candidates don't get their own way they sometimes attack the process," he said. "That's what happened here."

Even the four announced candidates – and a new fifth entrant – seeking the post were kept in the dark until the last minute about where interviews would take place or who will be chosen.

Reporters were barred from the activities at the club Saturday.

"How did you guys find out?" asked one of the chairs of the committee.

The News reported Friday that Freeland, a Lewiston native, St. Bonaventure graduate and White House assistant to President Trump, was expressing interest in running. Indeed, he arrived at Byrncliff Saturday morning to be interviewed for the post. He would not comment, but it is known he spent most of Friday on the Senate floor working on the president's impeachment defense.

Langworthy said he views Freeland as holding "unlimited political potential for us."

The sudden secrecy imposed by the “electorate of eight” surrounding the process did not sit well with contestants.

“If this process is supposed to be open and transparent, then I have no problem letting in the media for interviews and a final vote,” Mychajliw said Friday. “Let the public see what’s exactly taking place, because reasonable people could be distrustful of a process involving eight people in a back room in secret.”

Ortt noted Friday that state election law had thrust upon the eight county leaders the responsibility of naming a special election candidate. But he has harbored “concerns about the process from the beginning.”

“It’s important for the chairmen to think about how their constituents and committee people will view this process,” he said. “My greatest concern is what if I come out of the process winning and I have to defend it.”

Jacobs said after his interview that he had made a good case for his nomination and hoped the county leaders would decide Saturday. When asked about Freeland's late entry, Jacobs welcomed the newcomer but added he hoped the chairs would take into consideration his declaration of candidacy back in May.

"I think they should respect that I have worked very hard. I think that should count for something," he said.

"After a secretive process, the GOP has nominated a congressional candidate who has gone out of his way to align with President Trump rather than the people of NY 27," Zellner said.

Democratic Party leaders are expected to meet in coming days to nominate McMurray as their candidate.

"I look forward to meeting with my fellow county chairs in the coming days to discuss the nomination of Nate McMurray and providing NY 27 with the real representation it deserves," Zellner said.

Summit to choose GOP candidate in NY-27 shrouded in secrecy

A sign in the Byrncliff Golf Club in Varysburg gives away where the WNY Republican party leaders are meeting Saturday to determine who will be their candidate for the 27th Congressional District. (Robert J. McCarthy/Buffalo News)