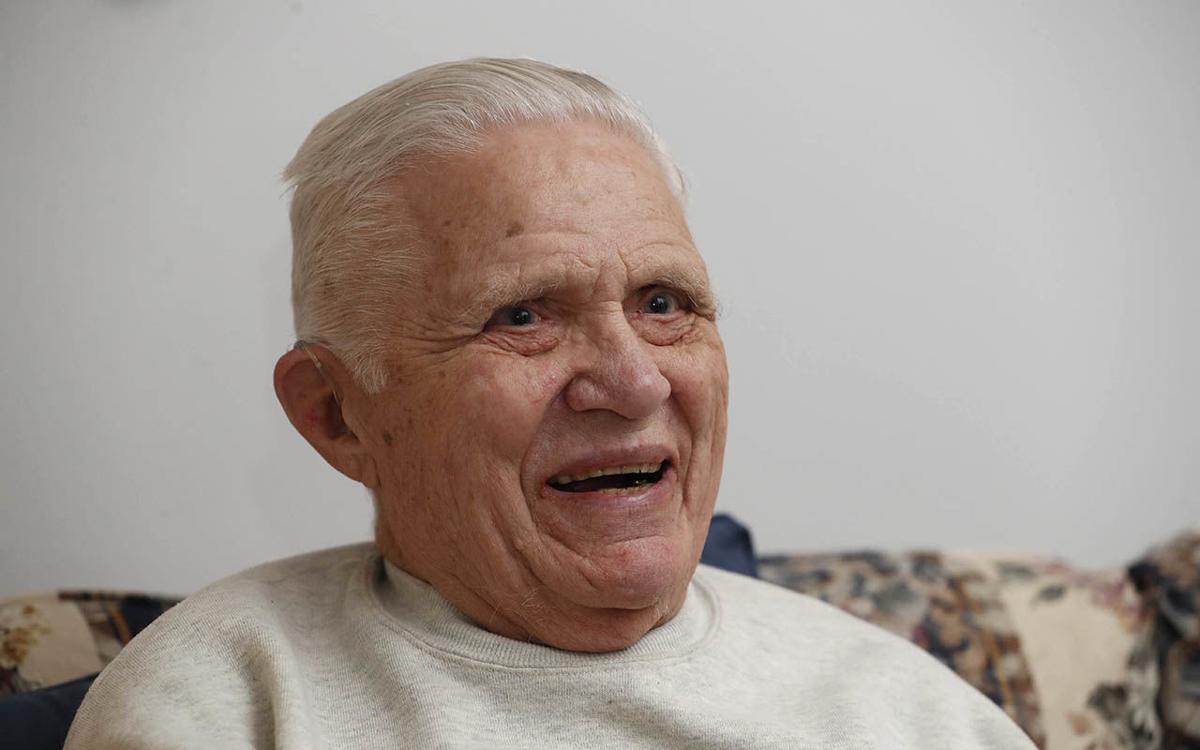 Theodore "Ted" Yochum, 90, didn't reveal to his own daughters until a few years ago that he received the Soldier's Medal for rescuing civilians who were drowning in Massachusetts. (Sharon Cantillon/Buffalo News) 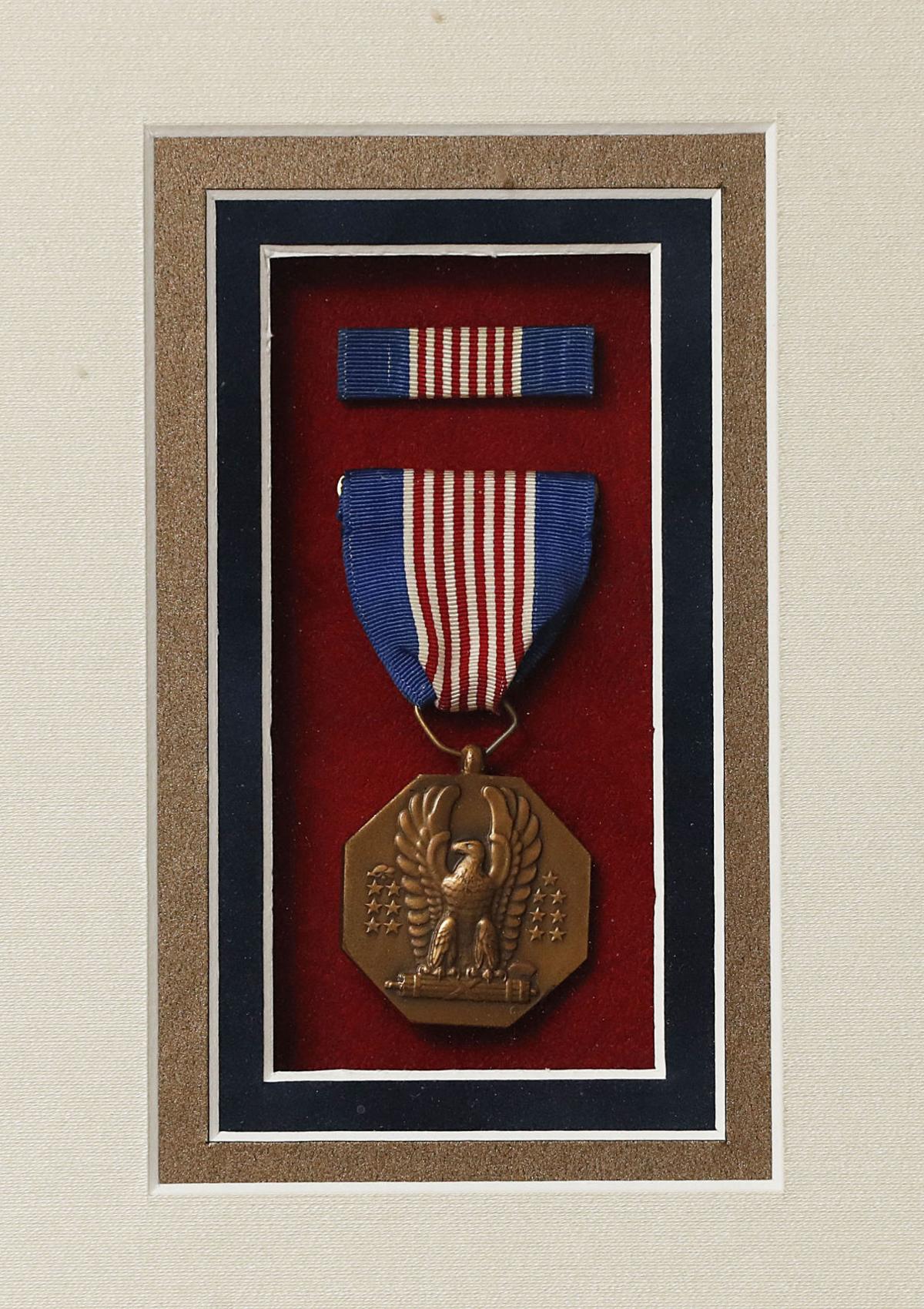 The Soldier's Medal on the wall at Theodore Yochum's home. (Sharon Cantillon/Buffalo News) 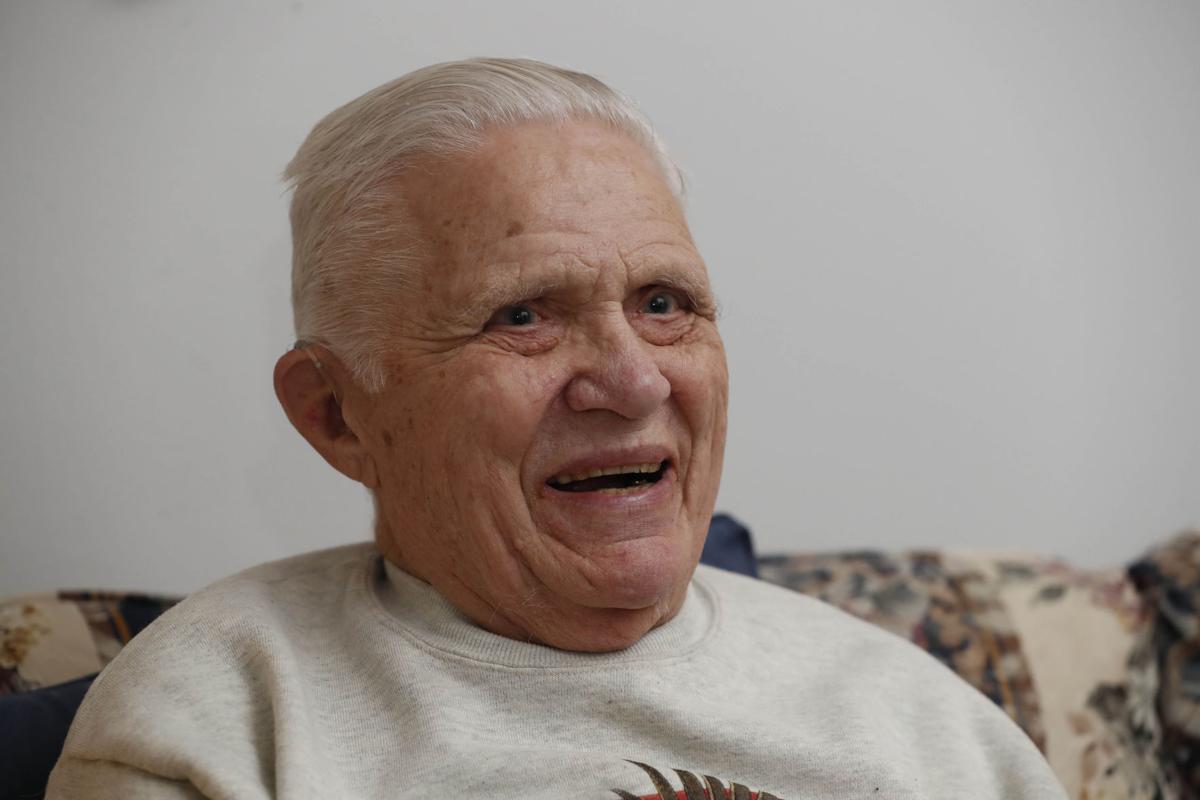 Theodore Yochum, at 90, at his home in Williamsville. (Sharon Cantillon/Buffalo News) 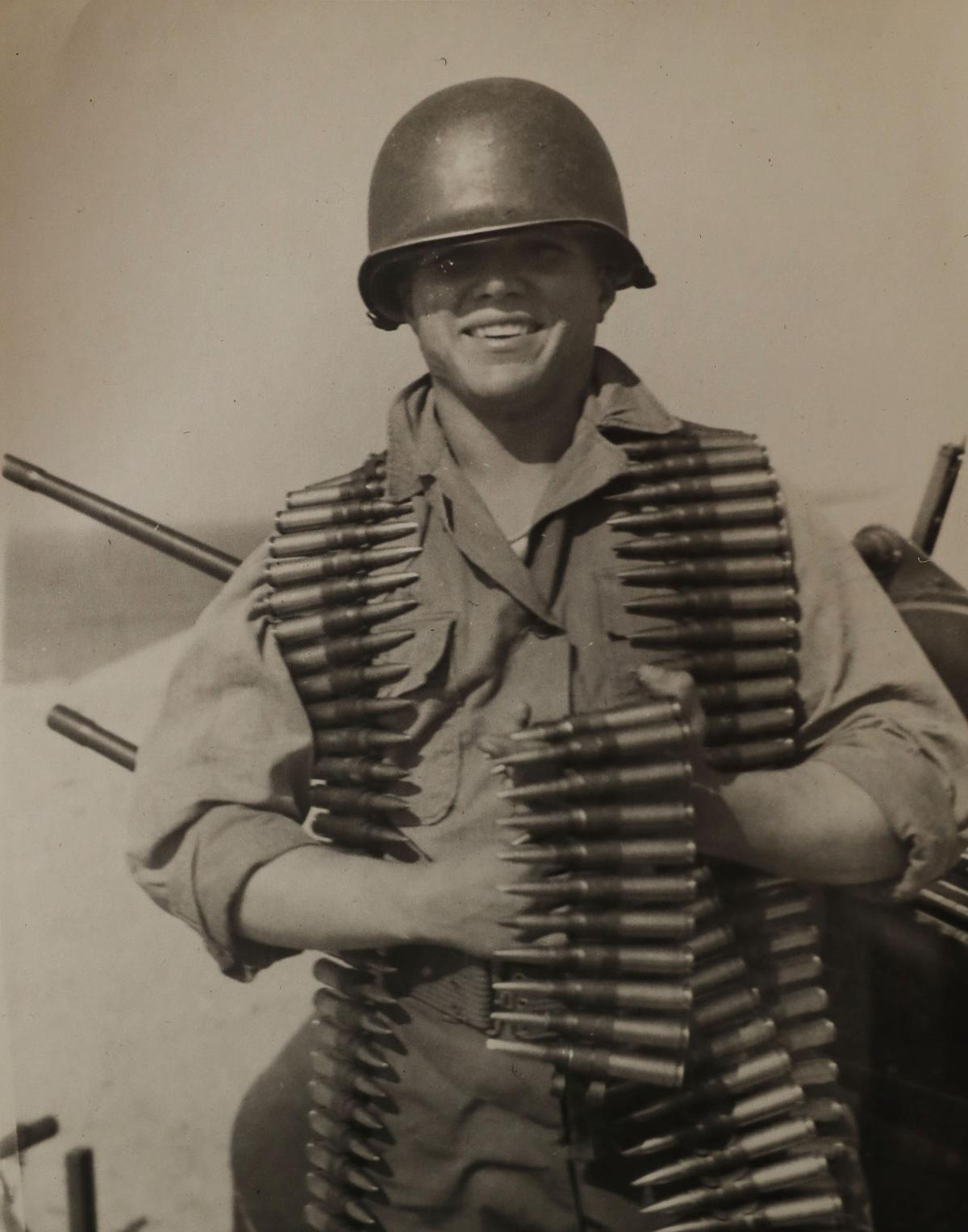 Theodore Yochum, as a young soldier in the early 1950s. (Family photo) 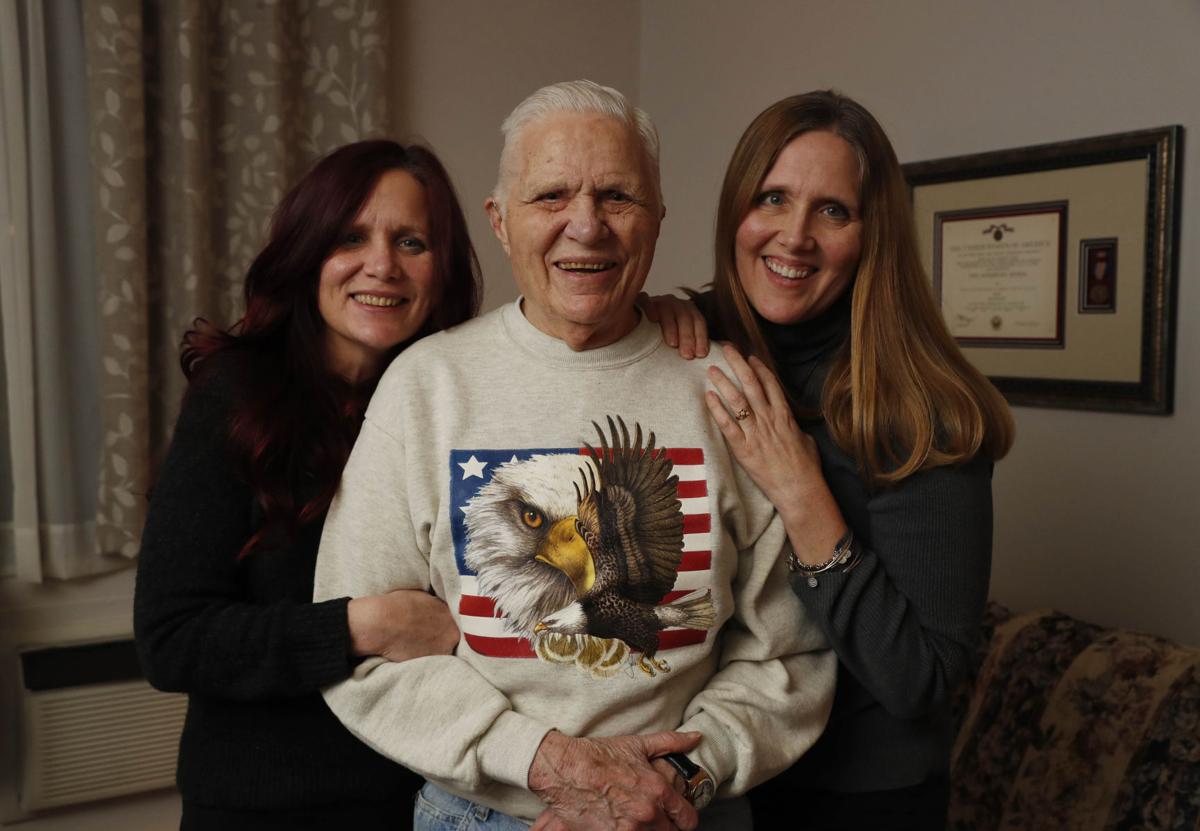 Theodore "Ted" Yochum, 90, with two of his five daughters, Laurie Christopher, the youngest (left) and Elizabeth Swetland, the first-born (right) at his home in Amherst. On the wall behind him is the Soldier's Medal and accompanying certificate that he finally had framed after almost 70 years. (Sharon Cantillon/Buffalo News) 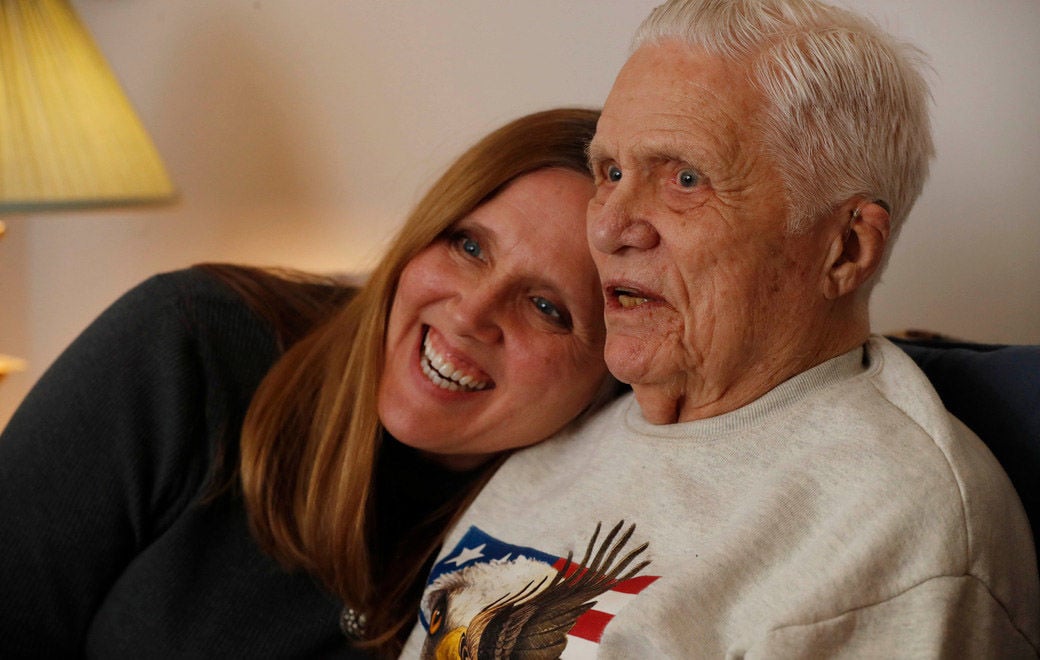 Theodore "Ted" Yochum, 90, didn't reveal to his own daughters until a few years ago that he received the Soldier's Medal for rescuing civilians who were drowning in Massachusetts while he was a Korean War-era soldier in 1952. He's with his oldest daughter, Elizabeth Swetland at his home in Amherst. (Sharon Cantillon/Buffalo News)

Ted Yochum admits he never said much to anyone about the rescue. Almost 70 years ago, he took a medal he was awarded by the Army and stuck it in a dresser drawer. Even his five daughters never knew that it was there.

Besides, he did not believe he deserved the attention. He was drafted into the Army during the Korean War. By sheer fate, he never went to the front lines. He always believed veterans who witnessed combat ought to receive the spotlight, and he used three words to describe what happened on an August day in 1952, at Boston Harbor.

“No big deal,” said Yochum, 90, a Kenmore native now living in Amherst whose daughters say he always underestimates his own importance.

Only if you press Yochum will he describe how he swam toward a weakened man in deep water, a guy who had been clinging to an empty gasoline can for at least 45 minutes. He survived because Yochum and another soldier each grabbed an arm and pulled him to the safety of a Navy boat.

No big deal? It is if you are Debra White, who celebrated her 65th birthday last week in Florida. In Massachusetts, she was the second child of Miriam and Albert White, a roofing and construction worker and a big Boston Red Sox fan who used to delight his kids with spontaneous decisions to bring Debra and her sister to baseball games at Fenway Park.

“The main thing about my dad is that he was the kind of guy who couldn’t hurt a fly, a guy who always had a funny story,” Debra said of her father, who died in 1978. Thinking back, she cannot remember him ever speaking of the day when he was fishing in a boat that flipped near Winthrop, Mass.

Albert, his brother-in-law Morris Gold and their nephew, David Hoffman, were all wearing life jackets when they were thrown into choppy, dirty water, at least 200 yards from shore. According to newspaper accounts, Albert was in deep trouble by the time Yochum reached his side.

In other words, in a cause-and-effect she never realized until just a few days ago, she would not exist except for the rescue Ted Yochum says was no big deal.

“God was on his side,” Debra said of her father, “but so were the people who saved him.”

The revelation came together through a string of chance events. A few years ago, Yochum read in The Buffalo News about military honors for Lt. Col. Patrick Miller, an Allegany native shot in the stomach in 2014 when an Army corporal at Fort Hood began firing on his own troops.

Despite his wounds, Miller managed to lock a door and protect others from the gunman. He later received the Soldier’s Medal, the highest honor awarded for valor in a noncombat situation.

Yochum’s daughter, Elizabeth Swetland, knew Miller’s family from her teaching job at Allegany-Limestone. The next time she visited her dad, they talked about Miller and his medal.

Swetland thought he was kidding. He asked her to hang on. He went into his bedroom, reached into a drawer and came back with the Soldier’s Medal.

Yochum had never told his own daughters about a medal of high national prestige that his children made sure is now hanging on a wall.

Google Yochum's name and the formal military citation pops right up. It notes how “Private Yochum,” while doing some training with the 704th Antiaircraft Artillery Gun Battalion, heard cries for help from three men whose fishing boat had capsized in rough water in the harbor near Fort Dawes.

"Despite the hazards of high winds, strong tide and dangerous cross-currents," the citation reads, "he proceeded to effect the successful rescue, which doubtlessly was instrumental in saving the life of at least one man who was suffering from exposure, shock and immersion.”

That was Albert White, whose daughters Ronna and Debra say he was not an experienced swimmer. I found the two sisters only because Swetland contacted us about her dad's medal. Reaching the children of the man Yochum saved happened through Megan Smolenyak, a nationally renowned genealogist fascinated by the tale.

Among the contacts she came up with was Morris Gold's son, Alan, who said his dad was a terrific athlete and that he and Hoffman probably could have made it to safety, without help. Newspaper accounts say they turned around, putting themselves at risk, when they realized Albert was struggling. Alan's tired father - like Albert, he was the son of Russian immigrants - was soon caught by the current, and he was picked up by the Navy boat 500 yards from shore.

Alan's younger sister, Andrea Gold Buchbinder, now a 65-year-old clinical psychologist, was born three years after the men went fishing. She remains close with her cousin Debra, their birthdays only days apart, and Andrea recently celebrated the birth of her first grandchild.

All of it took on intense new meaning in the last week, as she learned details of the rescue.

“You always live with the idea that the turns you take, whether you go right or go left, those are the microdecisions that determine the outcome, the sum and substance, of your life,” she said.

What keeps sweeping across her, with ascending power: “I’m lucky to be alive, because my dad was saved.”

Yochum, even now, plays down any attention. He came home from the Army to raise his daughters with his wife, Maureen O’Connor, whom he met at a rehearsal dinner before a friend's wedding.

The couple eventually divorced, and Yochum found solace by embracing distance running at Delaware Park. Swetland and her youngest sister, Laurie Christopher, speak of how their dad always prioritized his children, how he loved to draw pictures with his girls when they were small, how he inspired them by returning to college as a young man and building a career as “a graphic artist cameraman.”

Of the rescue, he recalls hearing cries for help, then running toward the water alongside fellow medal recipients Lt. Paul McCauley, Cpl. Joseph Titcomb and Private Robert Stanley. They were all treated afterward for exposure to "pollution," which meant untreated sewage in the harbor.

“I just remember the guy was shaking like a leaf,” Yochum said of the moment when he reached Albert. As for the entire decision to respond, Yochum said it fits with the approach he takes each day.

In Florida, Debra White is hardly so casual. She intends to write to Yochum to express her gratitude, and she and her sister Ronna are talking about the best way to put it into words.

Ronna, who would have grown up without a dad if Yochum did not intervene, advised Debra to lay out the essence of the sudden knowledge that equates to an overwhelming family blessing.

Without Ted Yochum's "no big deal," she would never have been born.

Theodore "Ted" Yochum, 90, didn't reveal to his own daughters until a few years ago that he received the Soldier's Medal for rescuing civilians who were drowning in Massachusetts. (Sharon Cantillon/Buffalo News)

The Soldier's Medal on the wall at Theodore Yochum's home. (Sharon Cantillon/Buffalo News)

Theodore Yochum, at 90, at his home in Williamsville. (Sharon Cantillon/Buffalo News)

Theodore Yochum, as a young soldier in the early 1950s. (Family photo)

Theodore "Ted" Yochum, 90, with two of his five daughters, Laurie Christopher, the youngest (left) and Elizabeth Swetland, the first-born (right) at his home in Amherst. On the wall behind him is the Soldier's Medal and accompanying certificate that he finally had framed after almost 70 years. (Sharon Cantillon/Buffalo News)

Theodore "Ted" Yochum, 90, didn't reveal to his own daughters until a few years ago that he received the Soldier's Medal for rescuing civilians who were drowning in Massachusetts while he was a Korean War-era soldier in 1952. He's with his oldest daughter, Elizabeth Swetland at his home in Amherst. (Sharon Cantillon/Buffalo News)