Admirers hope statue, park remind people that 'Tesla' means more than just a car
0 comments
Share this
Support this work for $1 a month
1 of 3 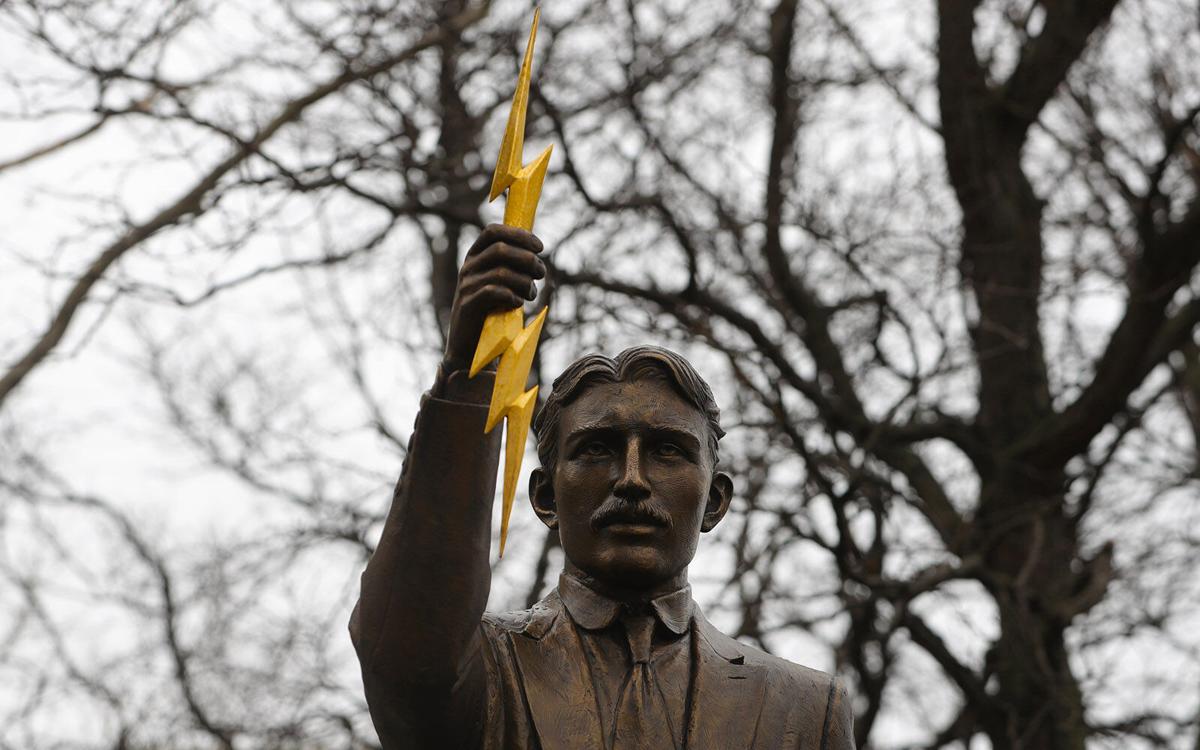 Nikola Tesla statue in park named for him at the corner of North Division and Main Street in Buffalo. 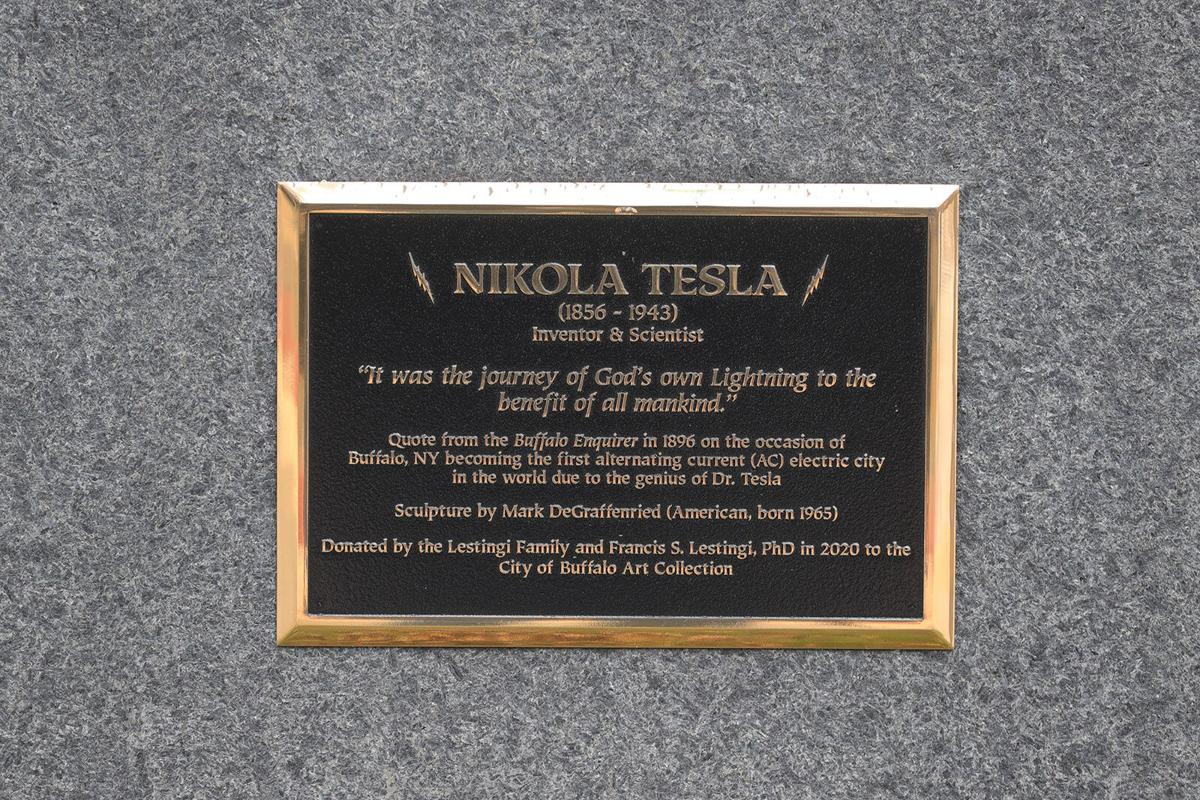 Plaque on Nikola Tesla statue in park named for him. 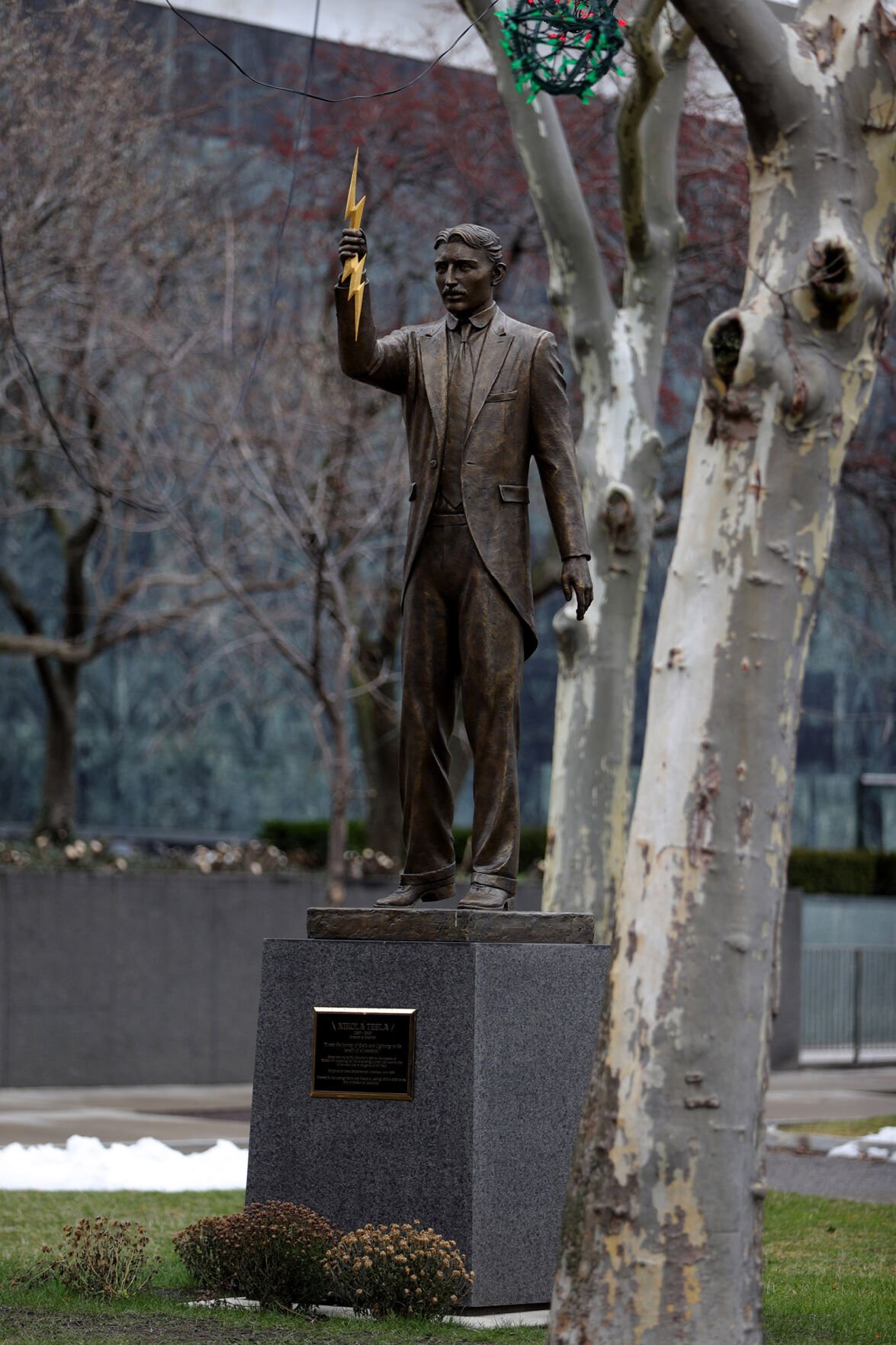 Nikola Tesla statue in park named for him at the corner of North Division and Main streets in Buffalo, Sunday, Jan. 3, 2021.

In a less-than-conspicuous ceremony last September, a statue in the likeness of Serbian American inventor Nikola Tesla was installed in a small green space in downtown Buffalo.

A month later – but no more conspicuously – a few local dignitaries, along with members of the Buffalo Arts Commission, returned to the space for a ceremony commemorating its dedication as Nikola Tesla Park, the only such named park in the nation, according to Paul Swisher, a retired North Tonawanda School District earth science teacher and musician.

"We had it installed in September and continued on trying to get the green space where the statue sits designated as Nikola Tesla Park, because there was no such park in the entire United States," Swisher said in a recent telephone interview.

For Swisher, retired SUNY Buffalo State professor Francis Lestingi – who designed the statue – and Martin McGee, a committed Tesla enthusiast, it was a long time coming.

“There’s (a tribute to Tesla) up on Goat Island that’s been there since the 1970s. There’s also one on the Canadian side that’s been up for some years now. And we were really looking for a way to honor him right in Buffalo,” McGee said of the statue and park at Main and North Division streets.

And why not, McGee said. It was 123 years ago next month that Tesla was feted at the newly opened Ellicott Square Building, during which he spoke about the then-recent electrification of Buffalo, according to McGee.

One of Tesla’s major achievements is that he developed the alternating current power system, and had it installed with the help of entrepreneur George Westinghouse in Niagara Falls, with current transmitted to Buffalo at midnight on Nov. 16, 1896.

“That was the first successful demonstration of that ability to transmit over long distances. It wasn’t long after that before it was extended to New York City, using a system that Tesla developed with George Westinghouse after Tesla left the Edison Co.,” said McGee.

Throughout his life, and even in death, Tesla often wound up in the shadow of his old boss, Thomas Edison, who is often described as America's greatest inventor.

"The primary mission of our whole council was to increase public awareness of who Nikola Tesla was because, most people, when they think of Tesla, just immediately think of the car, and a lot of Tesla's work got overshadowed by Edison, and there's a whole history there," said Swisher.

There were times when the opposite was true, again when Tesla teamed up with Westinghouse, according to McGee.

“Their first big achievement was the Chicago World’s Fair, where they won the contract for the electric system at the World’s Fair, beating out Edison in 1893,” said McGee.

However, generally, Tesla was nowhere near the self-promoter that Edison turned out to be.

"So Tesla was one of those rare humans that was actually more interested in helping other people than he was in his own personal wealth and fame. That really attracted me to the story, as well," said Swisher.

Swisher, who also has a background in music and art, said there are plans to add an art piece to the park in the form of a replica of a Tesla coil.

"It was that technology that actually went into radio and wireless transmission of information," Swisher added, noting that, historically, much of the pioneering work on long-distance radio transmission has been credited to a contemporary, engineer and inventor Guglielmo Marconi.

"Most people think that Marconi got credit early on for being the father of radio, but that was actually changed based on research and some of the patents that Tesla never got credit for. So now he's officially recognized as the father of radio and that all came from his concept of the Tesla coil," Swisher said.

On the origins of his interest in Tesla, McGee said: “I have to say, I was interested in him for some time. I read a biography years ago. I was pretty impressed by everything he had achieved as far as his inventions, and it was really a personal mission that came about from somebody badmouthing Buffalo, and I was looking for vehicles that could help elevate Buffalo’s status,” McGee said.

“I was thinking, what would be helpful for Buffalo’s image, and I said wait a second, Tesla, he’s becoming more and more a hero of the nerds," McGee added.

It prompted him to create a festival as an homage to Tesla.

“There was a festival in 2017 that I was involved with creating, the Tesla Festival, and the statue is sort of an outgrowth of that,” said McGee.

The fanfare that was originally planned had to be tempered amid the coronavirus pandemic, though the principals in the planning and creation of the Nikola Tesla statue and namesake park remained focused.

Swisher said Francis was the leading force in the design and creation of the statue.

"Marty was really instrumental in navigating a lot of the hoops that we had to jump through to get the green space named Nikola Tesla Park," Swisher said.

Swisher described himself as the group's organizer.

"I'm kind of like an organizer type of guy, so that's where I came in," Swisher said.

Nikola Tesla statue in park named for him at the corner of North Division and Main Street in Buffalo.

Plaque on Nikola Tesla statue in park named for him.

Nikola Tesla statue in park named for him at the corner of North Division and Main streets in Buffalo, Sunday, Jan. 3, 2021.