Ryan O’Connor has spent more than a decade handling thousands of calls while working as a volunteer emergency medical technician with the Snyder Fire Department.

Most came evenings and overnights because O’Connor works full-time in the banking field.

The way he sees it, that service didn’t matter much to the state Bureau of Emergency Medical Services last spring, in the midst of a pandemic, after a miscommunication within the all-volunteer department caused O’Connor’s EMT recertification paperwork to be sent six days after his certification expired.

A bureau official barred him from handling emergency medical calls until he repeated a beginner-style refresher course at his department’s expense.

“All the missed time from family and sleepless nights responding to EMS calls apparently means nothing to the New York State Department of Health," O’Connor told The Buffalo News.

Paid and unpaid Emergency Medical Services professionals across New York are well-versed in training, continuing education and filing deadline requirements, state Health Department spokesman Jeffrey Hammond said, and EMTs who needed recertification were given an extra year to get it when the pandemic started.

A closer look at how the oversight occurred, however, shines a light on the demands all first responders face during even the best of times, as well as complications the pandemic added to those burdens.

“The general public has no idea about the effort and the hours that go in behind the scenes to keep everything running,” said Richard Cole, a state certified EMS instructor coordinator who has helped firefighters from almost a dozen Western New York departments, including Snyder, train and understand related rules and regulations.

In uncertain times, EMTs adapted and weathered the pandemic

The pandemic closed most fire stations, limited personal contact within and outside departments and wrought frequent changes in training and treatment guidelines. It also added time, costs and fears for those responding to emergencies.

O’Connor, 39, is among almost 70,000 EMTs, paramedics and other medical first responders statewide. The married father of two children, 9 and 11, has been a volunteer firefighter for 15 years and took his beginner EMT training two years after he joined his department.

He is among 30 EMTs in his department, which has 65 active members. He also has been among the busiest, answering more than half of department emergency medical calls in 2019, 87% of the 370 calls last year and more than half of calls this year before his certification expired April 30.

About a dozen Snyder EMTs handled most such calls during the first several months of the pandemic, said Mark Niedzielski, continuing medical education, or CME, program coordinator with the Snyder department.

“A lot of people didn't respond because they had family and they were afraid to get Covid,” Niedzielski said.

Those who become EMTs – whether paid or volunteer – undergo similar training. It includes classes on obstetrics, pediatrics and geriatrics, trauma, CPR and infection control, treating shock, overdose, mental health and special needs patients, and how to lift, move and transport those in immediate need of care.

Pandemic challenges, an illness within the Snyder department leadership and miscommunication between O’Connor and Niedzielski led to the recertification paperwork being sent after O'Connor's certification expired, the two Snyder EMTs said.

O’Connor originally was certified through April 30, 2020, but the state in March of that year added an extra 12 months for those who needed recertification, including O'Connor.

EMTs are expected to present proof of continuing medical education coursework to the state Bureau of EMS at least 45 days before certification expires, Hammond said. Departments are required to attest to that training.

“Because of the one-year pandemic extension, we are not aware of any other EMTs in New York State who experienced a similar issue,” the Health Department spokesman said, though 3,780 EMTs successfully recertified.

O’Connor provided The News with paperwork that showed he completed most of his coursework before the pandemic, and all of it by Feb. 24 of this year. He signed it on March 1. Niedzielski signed it on March 29, but it sat at the fire station as O’Connor’s certification time ticked away.

“The rub is that all my training was done way before the time frame of my recertification process,” he said. “Only the paperwork, the paper trail, was behind.”

Niedzielski became department CME program coordinator in January, after a fellow volunteer in that role suffered a serious, unexpected illness and needed to step away from that duty. At the time, Niedzielski, who works full time in computer sales, also was helping the department manage its personal protective equipment inventory, as well.

It was the first time Niedzielski served in the CME role. He said he called the Bureau of EMS office twice within the recertification time window as he prepared to send O’Connor’s paperwork, to see if it could be filed electronically or needed to be mailed. He said he never heard back.

As the deadline neared, Niedzielski thought O’Connor had mailed in his paperwork, while O’Connor thought Niedzielski handled the matter. Both discovered otherwise just after the deadline. Timothy Oliver, chief of training with the Snyder department, made a plea for O’Connor’s recertification in a letter sent to the state May 6.

Gene G. Myers is the Health Department Bureau of EMS specialist who administers the CME program. He mailed a letter May 12 telling O’Connor his certification had lapsed and he could no longer handle EMS calls unless he retook the EMT traditional refresher program and a final exam. The decision cost O’Connor 48 hours of class time and 20 hours of at-home study time – after he had completed 46 hours that had been required for his certification. His department, and its fire district residents, paid an extra $550 for the refresher training.

“I take 100% responsibility because I'm the CME coordinator and I understand the state's approach to this,” Niedzielski said, “but I think it needs to be looked at on a leniency side because of Covid and what we were going through. I've worked with Ryan for 10 years. He's an excellent caregiver. And the state just ignores the fact that he's been so active.”

Hammond told The News in an email that state Health Department workers have taken an “all hands on deck” approach during the pandemic.

“Many employees took on added responsibilities,” he said, “such as our EMS personnel who helped staff the state’s testing and vaccination sites and helped with patient transfers as part of hospitals’ surge and flex plans.”

Cole, the EMS instructor, said the Bureau of EMS continued during the pandemic to keep fire departments, ambulance services and other first responders up to date through online presentations and emails, but may not have had time to address individual concerns.

Further complicating matters, Niedzielski, O’Connor and other first responders have told The News that new EMS treatment protocols changed quickly during the first several months of the pandemic and continue to evolve at a quickened pace that has challenged all first responders in the state. The state also delayed, but has resumed, plans that will require all EMS responders to file patient care reports online, instead of on paper, on proprietary computer equipment that all providers must purchase and learn to use.

The state has sent a small number of similar decertification letters to other departments in the region over the years, said Cole, also a veteran Niagara County firefighter, EMT, and life member of Tri-City Ambulance.

A different Snyder firefighter who 2 1/2 years ago forgot to mail his recertification packet to the state inside the 45-day time window was forgiven for filing late. The Bureau of EMS warned the department not to do it again.

Myers handled that case, too.

Cole helped the department navigate special dispensation in the previous case and said he believes that helps explain the lack of state leniency in the current case.

Regardless, it disappoints two of the busiest Snyder volunteer EMTs, one who took all the required continuing education courses on time, and both who said they made an honest effort during a pandemic – and an honest mistake.

O’Connor has finished his coursework and needs to take a final exam before he can handle medical treatment during fire calls.

He said he wants people to know what happened to him in the hope that others may be forgiven in such a challenging emergency medical care climate.

“When Jane Doe needs help at 3 in the morning, she doesn't care if you've failed to send in paperwork for six days,” O'Connor said.

He and Niedzielski said the decision the state made in their case also could send a chilling effect – and compromise emergency care – especially in small departments and communities with few EMTs.

“That could happen because everybody's busy and it gets to be where you say, ‘Enough is enough, I'm giving my time away,’ ” agreed Cole. “I can see where an all-volunteer agency could do that. But I have mixed emotions. If I'm busy and don't re-register my truck and I get a ticket, do I blame the officer for giving me the ticket or do I say, ‘Dumb me for not re-registering my truck?’ It's a toughie.” 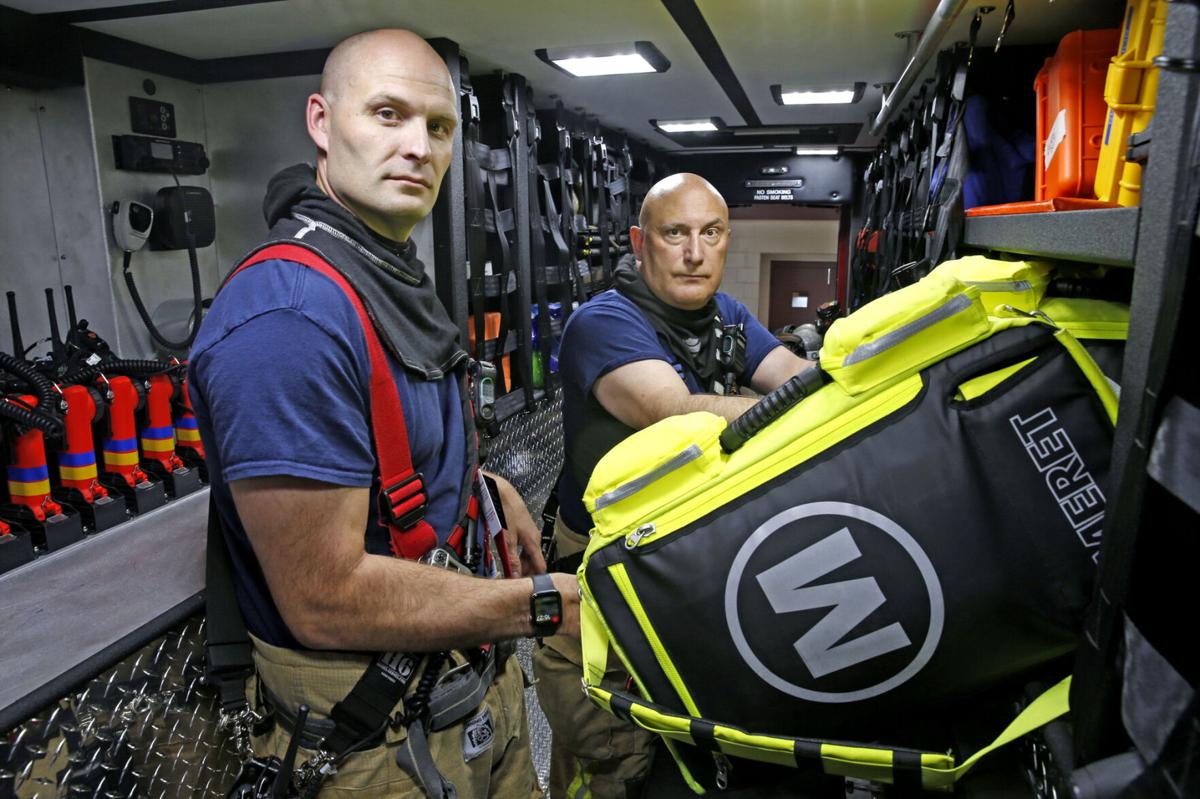 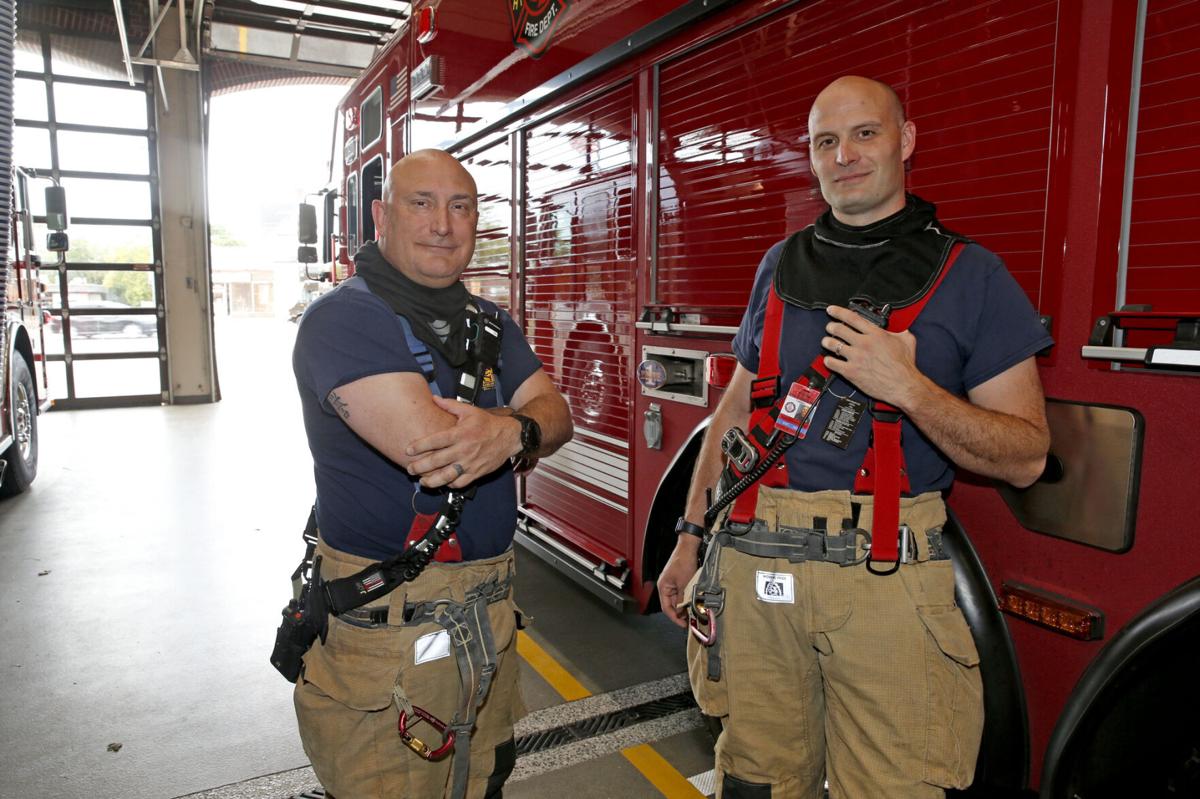 "I think it needs to be looked at on a leniency side because of Covid and what we were going through," Snyder Emergency Medical Services Capt. Mark Niedzielski, left, says of the state Bureau of EMS taking Ryan O'Connor, right, off the department EMT force until he completes a refresher course and exam.