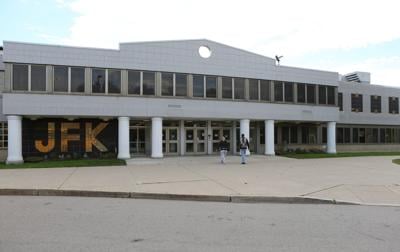 All it took were two words – an admonition from a school counselor trying to silence the auditorium full of restless students at the end of a test.

"Be quiet!" she said into the microphone.

And so set off a yearslong legal battle over a student's complaint she has suffered ringing in her right ear ever since the counselor spoke into the microphone on Nov. 20, 2015, at John F. Kennedy High School in Cheektowaga. In the latest development, an appellate court last week reversed a jury verdict that favored the student and threw out the $130,502 personal injury award.

The counselor later recounted to lawyers that she used her "stern voice – not elevated, but stern, because I didn't elevate my voice ever."

But one student testified the counselor "screamed" the two words into the microphone. And the injured student said the counselor "yelled" to be quiet, according to court records.

Her mother eventually filed a personal injury lawsuit on her behalf against the school district. The appellate court, in a unanimous ruling, reversed State Supreme Court Justice Paula L. Feroleto, who presided at the trial, saying she erred in denying the school district's request for a directed verdict dismissing the case.

It's a crushing ruling for the student, whose trial testimony convinced a jury she deserved the money for past and future suffering and medical expenses. The Cheektowaga-Sloan Union Free School District sought the reversal on the grounds the jury verdict was based on "impermissible speculation" and because Feroleto refused to set aside the verdict that its lawyers said went against the weight of evidence.

The crux of the case for the five-judge appellate panel turned on knowing what is "too loud" and whether the student's injury was foreseeable.

The student, then a 16-year-old varsity athlete involved in student government and the National Honor Society, was 75 to 100 feet away from the counselor, Victoria Coyne, at the time of the incident. Some two-thirds of the 110 high school juniors in the auditorium at the time were closer to Coyne than she was, and no one else suffered a hearing injury, the appellate judges said.

"Although the proof at trial reflected that a school faculty member had 'yelled' ... into a microphone and 'was really loud' in doing so, there was no proof presented that those words were spoken in a manner or at a volume that was unreasonable, foreseeably unsafe, or in violation of any applicable standard of care," according to the ruling.

The school district declined to comment on the appellate ruling. During the 2019 trial, Arthur Smith, one of the lawyers representing the district, said the counselor had done nothing wrong.

"She told a bunch of kids to be quiet and that's all she said," Smith said. "She didn't even rant. She said two words.

"This is not negligence," he said. "This is somebody doing their job."

For the student, her tinnitus, or ringing in the ears, will be a permanent condition, said Paul Bender, her attorney.

"She’s dealt with it and had to battle it for years," Bender told The News this week.

He's unhappy with the reversal because he said jurors grasped the common sense of the case.

"It’s common sense that when someone yells into a microphone and creates a loud noise it could damage someone’s hearing," Bender said. "You don’t need an expert to say that could hurt someone’s hearing."

The junior class was finishing up taking a three-hour vocational test administered by the military in the auditorium, with some students standing up and starting to walk away for their lunch period even though they were supposed to stay seated until all of the tests had been collected.

Another guidance counselor was telling them to stay seated, Coyne said at the trial.

"They weren't listening, so I came over to the microphone and said quiet," she said.

"I did it in a stern voice, yes," she replied when asked about her tone by the student's lawyer.

"I figured a change in voice would get them to listen," she said in her court deposition. "They weren't listening to him."

The student heard her differently.

The student said the counselor's amplified voice hit her with "a sudden-like jolt."

"Right after she screamed, my ear went muffled and then about thirty seconds later it started to ring," she said.

Another student in the auditorium later recounted at the trial how "really loud" the counselor was.

"Others were still taking the test. It definitely got loud in there, so they kept trying to tell us to ssshh! or be quiet," the student said. "And then eventually Ms. Coyne went up to the microphone and she screamed 'be quiet' in it."

The high school's other guidance counselor, Jerome Wysocki, testified about what he heard.

"It was forceful," said Wysocki. "It was demanding, you know what I mean, but nothing out of the ordinary."

'I still have it'

In the days after the incident, the ringing persisted, despite medications and doctor visits.

At first, her hearing was "muffled, like it went blocked and I couldn't really hear anything out of that ear," she said. "And then I started to regain my hearing – but it was ringing. It wasn't the way it was before."

Her teachers and coaches made accommodations for her.

The principal allowed her to each lunch away from the cafeteria, where it could get too loud for her.

Her advanced placement biology teacher let her watch assigned videos on her laptop without headphones in the back of the classroom.

Her basketball coach let her wear earplugs during games.

"It sounds so silly," she told jurors of the earplugs. "But I wore them because I was afraid that the buzzer, when it would go off, it would make my ear go really loud, and whenever my ear goes really loud, I get so paranoid that it's not going to come back down."

Her headaches and pain during the first six months have lessened.

To this day, she said, she copes with the constant ringing.

"I still have it, the same sound today," she told jurors.

After the incident she avoided loud sounds in her home, too, such as the vacuum cleaner, the washing machine or even running water, whatever she felt would make her tinnitus get louder.

A licensed clinical audiologist who examined the student testified at the trial that exposure to the loud sound caused her condition, and that it will be permanent in some form. Over time, patients can manage tinnitus so it becomes less disturbing, but it doesn't go away.

"When you expose people to loud noise, you're going to damage their hearing, and that's exactly what happened here," Bender told jurors at the trial.

"She's going to live with it for the rest of her life," he said. "It's not going away."

In my 24th year at The News, I rely on spreadsheets for stories and maps. So I like data. A lot. Still chasing stories at courthouses. A Missouri and Syracuse grad.

Schools have updated their protocols with an eye toward making sure all students can safely return.

The Editorial Board: It seems to us – The Josh Allen food fight, stupidity at Zoar Valley and rising to the top

So, which is it going to be: Buffalo Wild Wings or Bar-Bill? That’s the question set up – and how could it be inadvertent? – by Buffalo Bills…

A lawyer succeeded in having two tickets issued as part of the City of Buffalo's now-defunct school speed zone camera program thrown out on procedural grounds.

“The autopsy indicates that if he had regular medical care, he never should have died,” said an attorney who filed suit against the county, the Sheriff’s Office and the Holding Center on behalf of Gail Bialaszewski, the inmate’s mother.