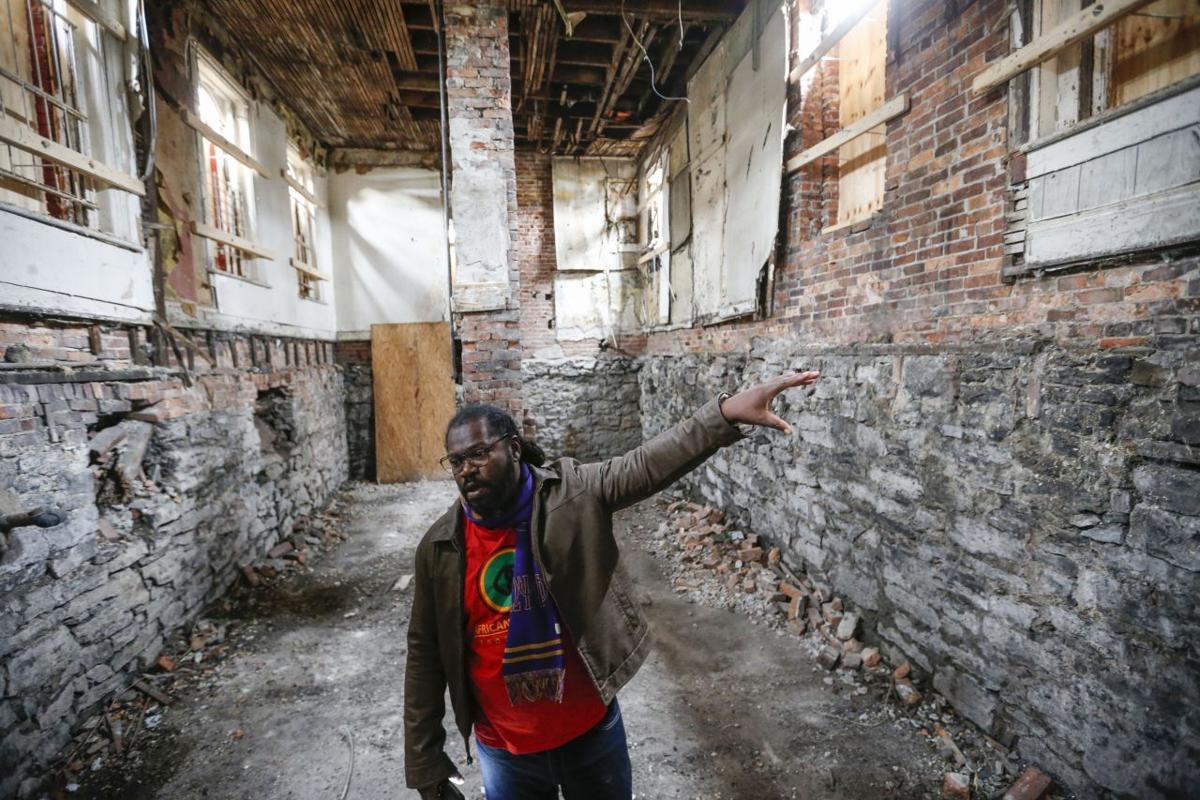 Alexander Wright points out some of the windows that have been boarded up to stabilize the Carlton Street building his African Heritage Food Co-Op is converting into a store. The co-op is a key component in the collaborative effort to build a “new food economy” in Buffalo. (Derek Gee/Buffalo News) 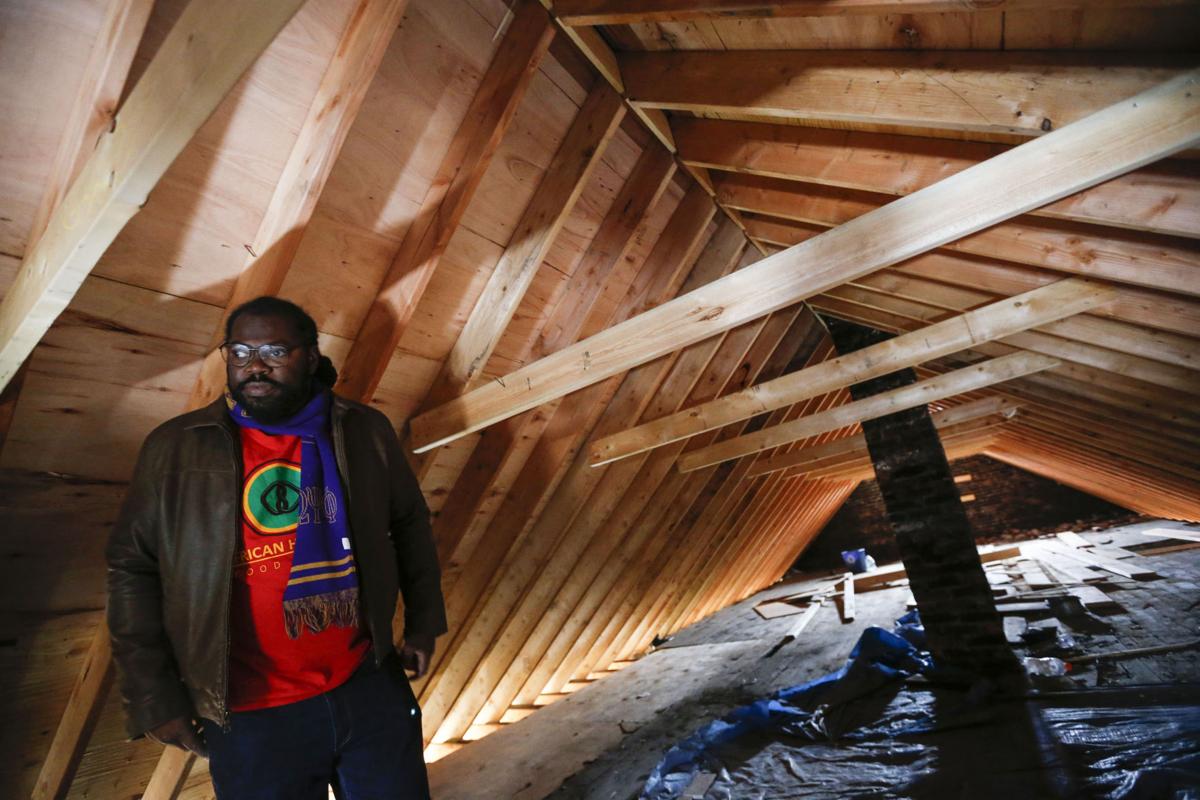 We know that food can bring people together, especially around the holidays.

But can it bring together Buffalo organizations that want to use food to empower people and build a new economy that benefits working-class residents?

Advocates from four organizations who spent a weekend on the West Coast this month learning how to collaborate, organize and mount effective campaigns – political and otherwise – think it can.

They were among 11 activists from around the country on three teams participating in the HEAL Food Alliance’s School of Political Leadership, a nine-month program to forge "a blueprint for inclusive, democratic food and farm systems that are accountable to all of our communities."

In plain English, that means food systems that put community needs over corporate profits and that supply healthy, affordable food grown in ways that sustain the environment. It also means food that is grown by workers paid a living wage and who take part in the decision-making.

The importance of food as an economic development tool is summed up in one pithy observation from Alexander Wright, founder of the African Heritage Food Co-Op in Buffalo and Niagara Falls and one of the program participants:

That might sound overly dramatic – until you think about the politics of food and its economic implications for those struggling to get a seat at the table. As one example, Wright recalled that President Franklin Roosevelt’s New Deal left out black farmers, who couldn’t get loans to buy tractors and other necessities. The result was that many ended up having to sell their farms, depriving them of the opportunity to build wealth and be producers rather than consumers.

In addition, "access without ownership is temporary ... and it’s extractive," Wright said, with money from shoppers in black and Hispanic neighborhoods ending up in the pockets of store owners who may not live there and who take the profits back to their communities instead of letting those dollars recirculate in the neighborhood.

Along with Wright from the Food Co-Op, the Buffalo group includes Gail Wells from the Community Building Team, Allison DeHonney from Urban Fruits and Veggies and Bryana Hassan of CoNECT: Community Network for Engagement, Connection and Transformation (formerly the Community Health Worker Network of Buffalo).

They submitted a joint application and spent a weekend in Lindsay, Calif., at the first training session figuring out "what is your story" and how to communicate that, said Wells, who also has undergone National Coalition Building Institute training in diversity and inclusion.

Buffalo’s story is the "new food economy," Wells said, noting the four were selected because of what already is goingon  here, including a food policy lab at the University at Buffalo and the Buffalo Food Equity Network, which had an Agricultural Pavilion at the Juneteenth Festival to educate about African Americans’ role in farm science and entrepreneurship.

One vision for this new food economy, Wright said, could involve having the Food Co-Op buy from Urban Fruits and Veggies, which runs wellness programs for businesses in addition to growing and selling produce to businesses and organizations. DeHonney’s business could then grow produce specifically for the co-op at its urban farm in the Ferry-Jefferson area as well as a second farm that will open soon along with greenhouses and hydroponic systems it plans.

Incorporated into that collaboration could be using DeHonney’s urban farms to educate young people about agriculture and the power inherent in it, while CoNECT and the Community Building Team educate about effective organizing as part of a comprehensive approach to community building to make sure residents are in control.

In California, the team began learning some of the concrete steps to make all of that happen. It learned about HEAL – a multi-ethnic, multiracial coalition focused on health, environment, agriculture and labor – while also visiting farms and hearing from groups out there taking on the pesticides issue. Those advocates passed on advice about how to assess the political culture and other challenges such groups have to contend with. In Buffalo, that often means a culture in which people of color vote for candidates because, in Wright’s words, "somebody comes to our barbecue and gives us a pack of hot dogs."

One of HEAL’s goals is to teach advocates how to break free of that trap and equip them to mount campaigns around issues important to particular communities. The sessions teach skills such as electoral and workplace organizing, as well as how to analyze who holds the power in a community and how to effectively pressure those people.

"What does electable and accountable leadership look like?" Marla Larrave, HEAL’s political education manager, said in a phone interview, describing one topic the program addresses.

DeHonney was buoyed by the chance to sit down with leaders of color who care about communities of color and hear "how they’re campaigning, how they’re strategizing, so that we can have a foundation to shape our respective projects."

The nine-month program will include three more in-person sessions in local communities – with a Buffalo session tentatively slated for June – with other teleconferencing sessions in between.

Meanwhile, the Buffalo groups will keep developing their approach to building a food economy run by and for residents, an economy that truly reduces poverty rather than subsidizes it by handing out benefits that keep people dependent.

"We need to have ownership of all the things our community needs," said Wright, whose co-op has about 160 members and is raising funds to develop a permanent Buffalo location on Carlton Street in the Fruit Belt, eliminating one of Buffalo's food deserts. "If we spend money on it, we should have ownership of it."

To that end, the groups are honing their collective effort, which can not only yield the new food economy they envision, but be a template for other efforts.

DeHonney, who previously worked in insurance and finance, said her corporate experience showed her that "collaboration is everything." Yet that cooperation too often has been missing among grassroots groups in Buffalo, each operating in its own silo.

"Maybe this collaboration can be an example of that," she said.

Alexander Wright points out some of the windows that have been boarded up to stabilize the Carlton Street building his African Heritage Food Co-Op is converting into a store. The co-op is a key component in the collaborative effort to build a “new food economy” in Buffalo. (Derek Gee/Buffalo News)