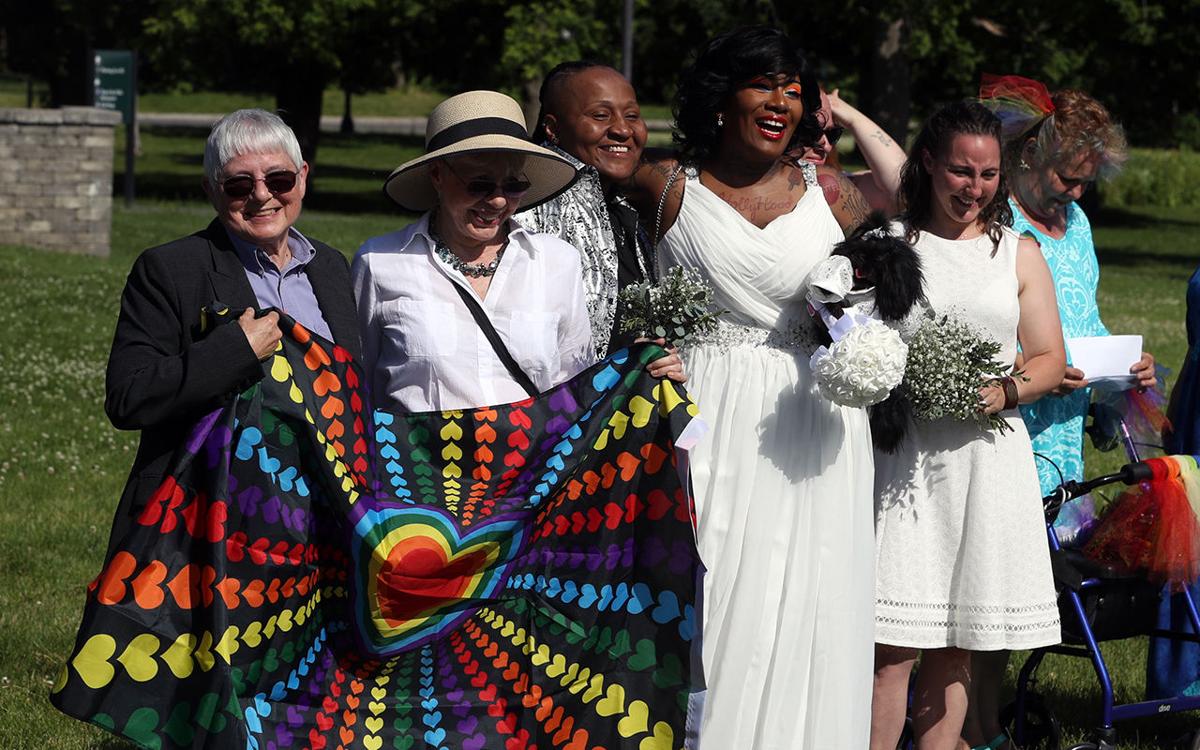 Bonnie Strunk, left, and her longtime partner, Karen Salsgiver, both of suburban Syracuse, got married in a wedding and vow-renewal ceremony for LGBTQ couples Sunday on Goat Island in Niagara Falls State Park. (John Hickey/Buffalo News) 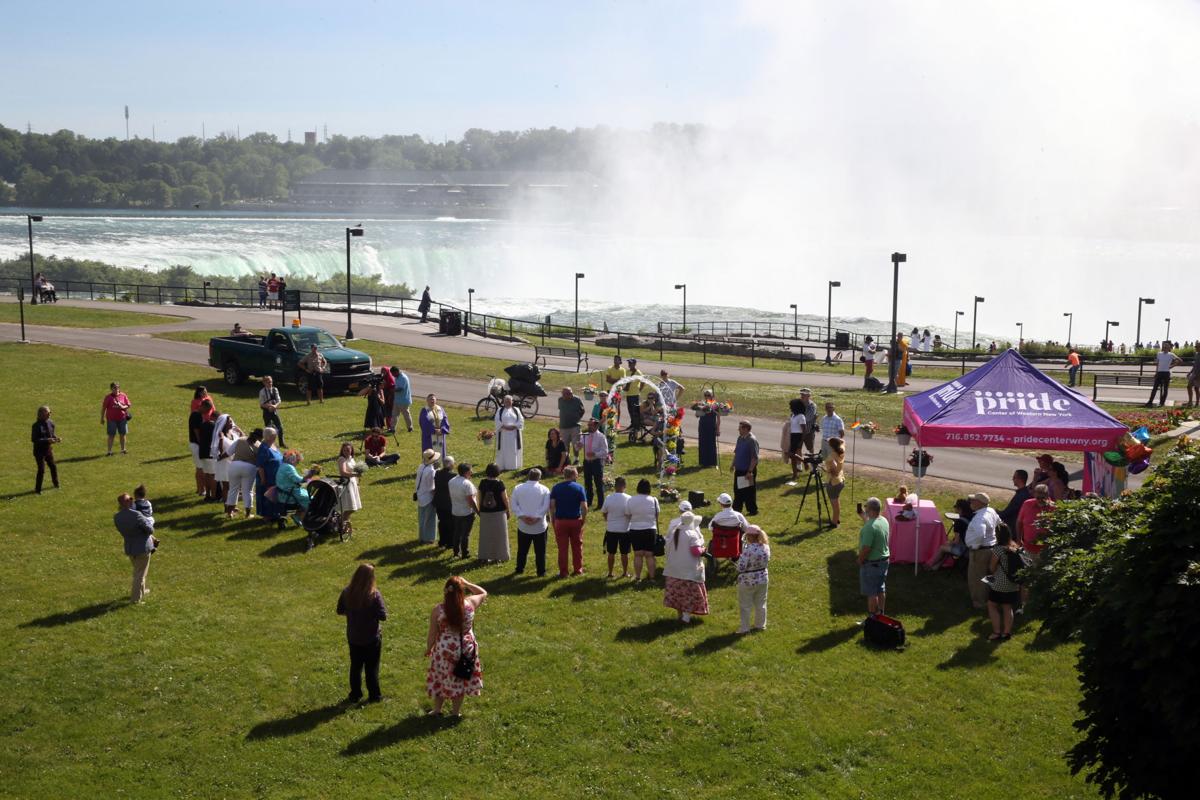 Karen Salsgiver and Bonnie Strunk figured Sunday was the right time to get married – 43 years after they began their relationship.

With the mist from Niagara Falls rising in the distance, Strunk wrapped a flag dotted with rainbow-colored hearts around Salsgiver's shoulders and gently patted her back as the couple from suburban Syracuse listened to officiant Kitty Lambert-Rudd expound on love and pride.

Salsgiver and Strunk joined 10 other LGBTQ couples who renewed their marriage vows under bright sunshine and blue skies on Goat Island in Niagara Falls State Park.

The ceremony, called Married with Pride, was held as part of WorldPride events and to mark the 50th anniversary of the riots at the Stonewall Inn in New York City, widely considered the beginning of the gay rights movement.

The couples and the speakers who helped them celebrate the occasion talked about their gratitude for the advances the LGBTQ community has made – and their belief the fight isn't finished.

"It's just an amazing moment," Lambert-Rudd, who married her wife, Cheryle, in July 2011 in Niagara Falls precisely when legal same-sex marriage took effect in New York State, said before the ceremony. Kitty Lambert-Rudd was 14 when Stonewall took place, but she didn't come out until she was in her 30s and married to her then-husband.

A number of volunteers worked through the Pride Center of Western New York and its Niagara County Pride affiliate to bring the event to life, aided by the City of Niagara Falls, Niagara Falls State Park and other sponsors. A highlight of the day's planned events included the lighting of Niagara Falls in rainbow colors.

The event began around 4:30 p.m. in front of Goat Island's Top of the Falls Restaurant, with 11 couples lined up, some in matching outfits, some with children and one with a dog in a dress.

"I hope the couples that are participating today feel accepted, they feel validated, they feel empowered, by the fact that we live in a state and in a time where their right to love each other is affirmed and endorsed," Steve Jagord, the Pride Center's program manager, said before the ceremony, "and they shouldn't feel like they have to hide who they are and who they love."

David Bandish and José Correa will celebrate their 14th anniversary next week. The Lancaster couple came because they wanted their children – Jayden, 10, and Jada, 5 – to share in the vow renewal.

"Just to let them see what it's all about and that we're all part of a big family," Bandish said.

"I'm just coming along for the ride. I was hoping to get a new ring out of it," Correa quipped. Bandish and Correa wore matching black T-shirts that said "Groom." Jayden's read "Best man" and Jada's read "Maid of honor."

Watrobe, 61, grew up in Niagara Falls and said she couldn't imagine an event like this taking place in her hometown when she was younger.

"This, for me, brings my life full circle," said Watrobe, briefly overcome with emotion.

They've been together nearly 44 years and married since 2011.

"I feel very relaxed, and I know there was a time in my life, right after Stonewall, that I didn't feel relaxed at all. This just marks a major milestone change to be around all these people," said Van Heusen, who was in the Army when he learned of the riots.

Tibet Hafii, in a wedding dress, and Michelle Hafii, in black shirt, black pants and a shiny silver-and-black jacket, renewed their vows of two years ago with their Shih Tzu, Barbie.

"We are living history," Michelle Hafii said as they posed in front of the Falls for a family photographer.

Moments after the ceremony, a reporter asked Salsgiver and Strunk whether anything felt different for the couple now that they were married.

"Actually, no," Salsgiver said, laughing as she held a bouquet of baby's breath flowers.

"No, our love was very strong for 43 years. It's going to remain very strong," Strunk said. "We're going to love, cherish and honor each other for the rest of our lives."

A law firm is trying to prod Cheektowaga to pay a Kaisertown woman a jury award, now valued at nearly $1.1 million, that it owes her.

Nichols is one of four schools across the region to shut down in-person instruction to varying degrees over the past several days due to Covid-19.

Body of sewer contractor who fell into well has been recovered

The body of a sewer contractor who had fallen into a well on Bird Island Thursday was recovered overnight, the Buffalo Police Department said …

Bonnie Strunk, left, and her longtime partner, Karen Salsgiver, both of suburban Syracuse, got married in a wedding and vow-renewal ceremony for LGBTQ couples Sunday on Goat Island in Niagara Falls State Park. (John Hickey/Buffalo News)