WASHINGTON – The independent commission that is supposed to draw up New York's new legislative districts divided along partisan lines Wednesday, delivering competing district maps: one set aimed at benefiting Democrats and the other intended to aid Republicans.

And the commission's divisions foreshadow the fact that the Democratic State Legislature is likely to take over the process – to the benefit of Democrats – early next year.

The proposed maps mark the beginning of the redistricting process that will redraw the legislative lines for the 2022 election. After a round of public hearings this fall, the New York State Independent Redistricting Commission will try again to come together on new maps for the state's 26 U.S. House seats, as well as for the State Senate and Assembly.

But the commission's first stab at drawing up new district lines did not prove to be very encouraging.

"I've gone from being very hopeful to being supremely disappointed," said Ross Brady, an independent on the redistricting commission. "I regret the fact that we weren't able as a commission to actually put a single product together."

With Democrats tasked with shrinking the state's number of House seats from 27 to 26 under new census numbers released Monday, Democrats in Albany are likely to use their monopoly on power to try to bolster the size of their delegation.

While none of the maps produced Wednesday are likely to be adopted, the Democratic maps at least provided some clues as to a path the Democrats in the State Legislature may take in shrinking the state's number of congressional districts from 27 to 26.

That move, mandated by the state's slow population growth in the 2020 census, will be the most important of the entire New York redistricting process.

And in the plan adopted by Democrats on the independent commission, the Southern Tier district off retiring Republican Rep. Tom Reed – which extends from Chautauqua County east to Ithaca – would be chopped up.

The westernmost part of Reed's district would become part of a district that wraps around metropolitan Buffalo like a reverse C. It would include Chautauqua, Cattaraugus and most of Allegany Counties, while the rest of Reed's current 23rd district would be split among three other districts.

"Niagara Falls has a lot in common with the City of Buffalo," Zellner said. "They're like-minded communities, which is what we should be striving for when we are doing redistricting. So I think it's a mistake" to separate them."

The Republican map differs with the Democratic version in several significant ways. The GOP plan extends Higgins' district eastward to the town line between Clarence and Newstead, thereby giving him more Republican territory and making the district more competitive.

Republicans to target Rep. Brian Higgins in 2022, with eye toward reapportioned seat

And it preserves a Southern Tier district – one that extends all the way from Lake Erie to Binghamton.

Both maps include some bizarre moves. The Republican map extends Jacobs' district eastward all the way to the western shore of Cayuga Lake, and it creates a Utica-based district that stretches from the shores of Lake Ontario and the St. Lawrence River southward to the Pennsylvania state line.

And the Democratic map includes a meandering blob of a district that somehow stretches from Hornell to Utica.

Instead, there are two Senate and two Assembly maps, too – each drawn up to benefit the party that drew them.

Higgins, a Buffalo Democrat, collected more than twice as much money as he raised in the same period two years earlier.

At a meeting Wednesday, commission members vowed to try to come together on unified plans after public hearings on the partisan proposals, including one at 4 p.m. Oct. 20 at the Burchfield Penney Art Center in Buffalo.

But the partisan division in the earliest and presumably easiest part of the redistricting process doesn't bode well.

"Makes it quite likely the commission won't come to an agreement and the Dem-controlled NY legislature will eventually take over the process," tweeted redistricting guru Dave Wasserman of the Cook Political Report.

The law allows the legislature to take over the process and reject any plan the commission approves. That's why there's been a longstanding assumption in Albany that the governor and the legislature would end up drawing district lines that benefit Democrats.

Gov. Kathy Hochul, a Democrat, did nothing to dampen that speculation with her answer when New York Times reporters asked her last month if she would use her influence to expand her party's majority in the House through the redistricting process.

"Yes," Hochul replied. "I am also the leader of the New York State Democratic Party. I embrace that."

A Democratic gerrymander of the state's House districts could reduce the number of Republican-held seats from eight to three, Wasserman said in May. Democratic House leaders would likely encourage that move in order to counter Republican gerrymanders that will likely cost Democrats House seats in Texas and other GOP states.

But any Democratic gerrymander of the state's districts will likely end up in the same venue that drew up New York's current congressional districts: the courts.

Democrats "are going to stonewall and drag this process out, hoping New Yorkers aren’t paying attention so partisan legislators can draw their own maps," said State Republican Chairman Nicholas A. Langworthy. "We intend to employ every legal and political tool in our arsenal to stop them and ensure New Yorkers are fairly represented.”

But the Democratic map puts Orchard Park, where Jacobs lives, into a Buffalo-based district where he would have to run against Rep. Brian Higgins, a Buffalo Democrat.

New York to lose a congressional seat in 2022

If New York had counted just 89 more people in the census, Minnesota would have lost a seat and New York would have continued to have 27 members of the House.

Correction: Because of incorrect information provided to The Buffalo News, an earlier version of this story said that the Democratic congressional map placed Rep. Chris Jacobs, an Orchard Park Republican, in the same district as Rep. Brian Higgins, a Buffalo Democrat. In fact, the homes of Jacobs and Higgins would be in separate districts under both the Democratic and the Republican maps. In addition, under the Republican map, Higgins' district would be extended eastward to the Clarence-Newstead town line, not the Erie County line.

Body found in Wyoming believed to be Gabby Petito

Authorities say a body discovered Sunday in Wyoming is believed to be Gabrielle "Gabby" Petito. 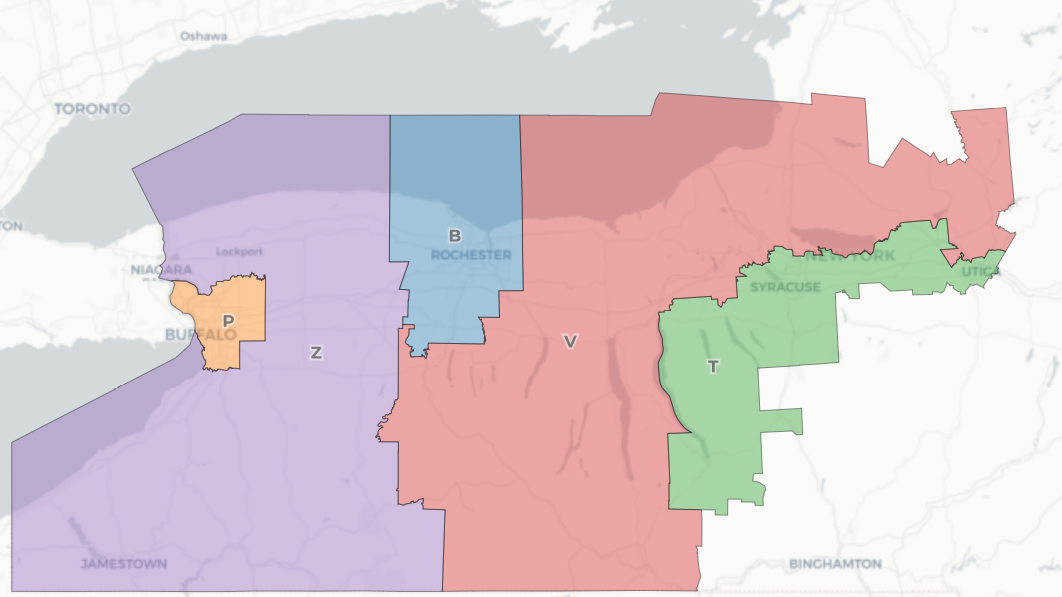 A map drawn by Democrats on the state's redistricting committee. (Contributed image) 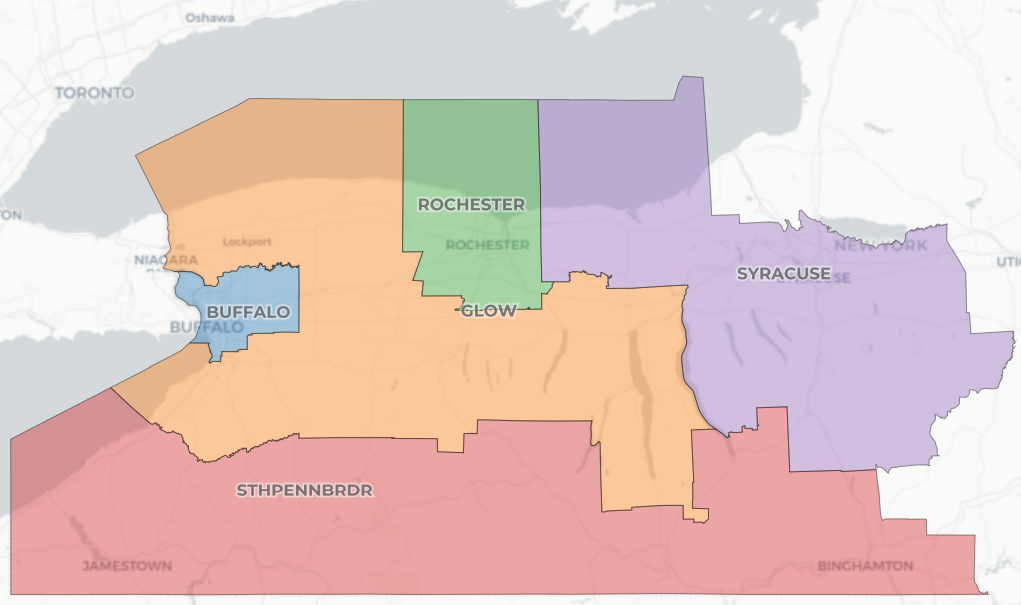