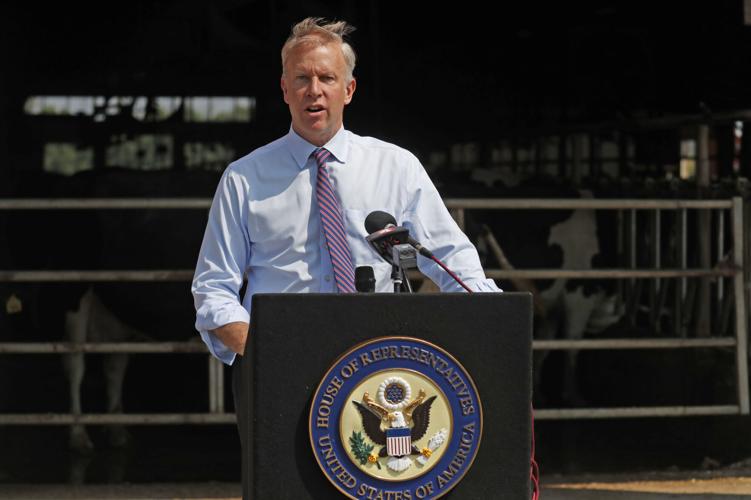 Rep. Chris Jacobs, an Orchard Park Republican, said he plans to run for re-election in the newly drawn 24th district, a heavily Republican enclave that would meander from the northernmost shores of the Niagara River to the Thousand Islands region – a driving distance of 256 miles – while bypassing most of metro Rochester. 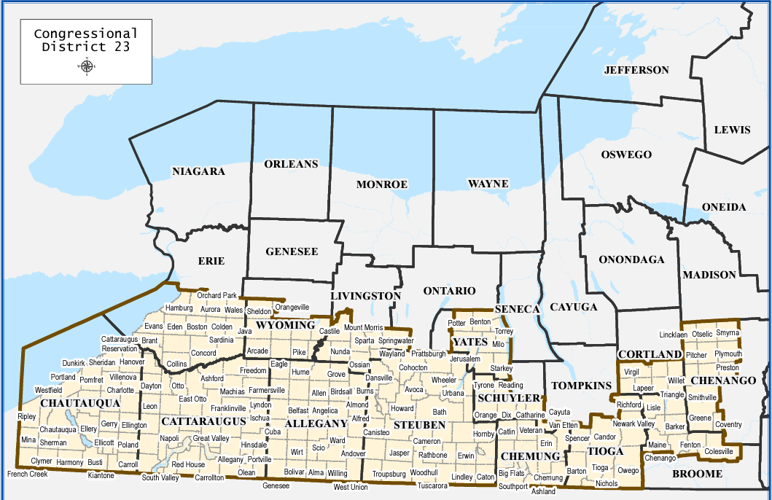 Those once-fanciful scenarios started to look possible – and maybe even likely – on Monday, as two upstate Republican members of Congress made their accommodations with a new district map drawn by Democrats to minimize the GOP's chances.

Erie County would be split among three congressional districts under remap

While the Buffalo-based district in the proposed plan would be largely Democratic, the other two districts including parts of Erie County consist largely of smaller communities and rural territory and are most likely to be represented by Republicans.

Rep. Chris Jacobs, an Orchard Park Republican, said he plans to run for re-election in the newly drawn 24th district, a heavily Republican enclave that would meander from the northernmost shores of the Niagara River to the Thousand Islands region – a driving distance of 256 miles – while bypassing most of metro Rochester. Jacobs, who moved to Orchard Park two years ago to run in a district vacated by former Rep. Chris Collins, would have to move again to run in the 24th district because Orchard Park is in the district to the south.

That district, the 23rd, will be getting new representation, too – and it may well come from someone who has to make an even bigger move. Democratic mapmakers eliminated the Utica-based district served by Rep. Claudia Tenney, an Oneida County Republican, so she announced Monday that she will be running for re-election in the heavily Republican, Southern Tier-based 23rd district.

Here's a look at the two new districts and the incumbent lawmakers who want to represent them:

Chris Jacobs to run in district stretching from Lewiston to Watertown

Two sources close to Jacobs said early Monday that Jacobs plans to run for re-election from the newly proposed 24th District, which would meander from the northernmost shores of the Niagara River to the Thousand Islands region – a driving distance of 256 miles – while bypassing most of metro Rochester.

This district, the 24th, is the one that most closely resembles Jacobs' current district – yet it's also a district unlike any that upstate New York has ever seen, running the length of Lake Ontario, save for a carve-out for a Democrat-dominated district in metro Rochester.

The new district includes some of the most populous communities in the current 27th congressional district, such as Lancaster and Clarence in Erie County, Lockport in Niagara County and Batavia in Genesee County.

"The renumbered NY-24 contains over 400,000 constituents I currently represent, and I am excited to get to better know a few new communities," Jacobs said in a statement.

In contrast, the redrawn 23rd District in the Southern Tier consists mostly of territory Jacobs has never represented, either in Congress or as a state senator.

The new 24th District, however, also includes plenty of new territory for Jacobs, given that it runs from Porter to the Thousand Islands region. It is one of four largely Republican districts in the Democrat-drawn map. 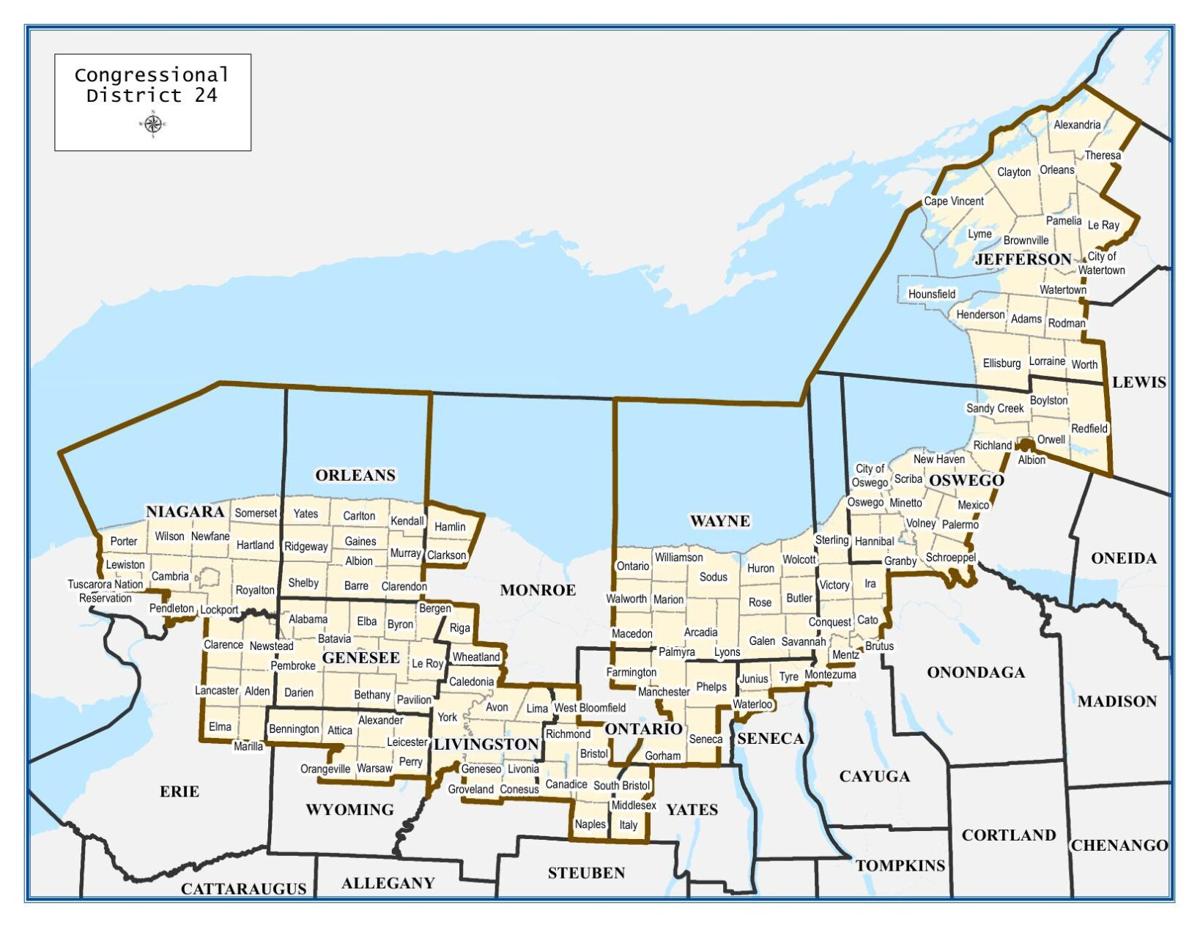 Jacobs made sure to cater to those Republicans in announcing his election bid.

"The coming elections are a chance for conservatives to elect majorities in Congress who will check the Biden administration’s disastrous policies, re-implement the successful policies of the Trump administration, and put our country on a solid foundation once again," he said in his statement. "I am committed to fighting for your constitutional rights, your economic prosperity, and our future – just as I have for the past two years.”

Jacobs had $334,154 in cash on hand at the end of September, but will likely have to raise considerably more to run television ads in a district that now spans the Buffalo, Rochester and Syracuse television markets.

Jacobs announced his plans to run in the 24th before other candidates could jump into the race, said a Republican political consultant who asked not to be identified by name.

"He was smart to get ahead of this thing," the consultant said.

Rep. Claudia Tenney, a Utica-area Republican whose district was divided up in a redistricting plan released by Democrats on Sunday, said Monday that she plans to run for re-election in the newly redrawn district that stretches from southern Erie County nearly to Binghamton.

Like Jacobs, Tenney said she fits in with the new district she has chosen, even though she's not from there.

"I have a strong conservative record of advocating for our upstate values, fighting for our small business community – including our local farmers – defending election integrity, fighting for our Second Amendment rights, supporting the natural gas industry, and holding the Biden Administration accountable," said Tenney, 60, of New Hartford, in Oneida County. "I look forward to meeting and earning the support of even more New Yorkers and getting to work for our region in Congress."

Tenney, an attorney and small business owner, won the congressional election in New York's current 22nd District in 2016, only to lose it two years later. But in 2020, she reclaimed the seat in a narrow victory over Democratic Rep. Anthony Brindisi.

The current district Tenney serves stretches from Oswego in the north through Binghamton and to the Pennsylvania line. 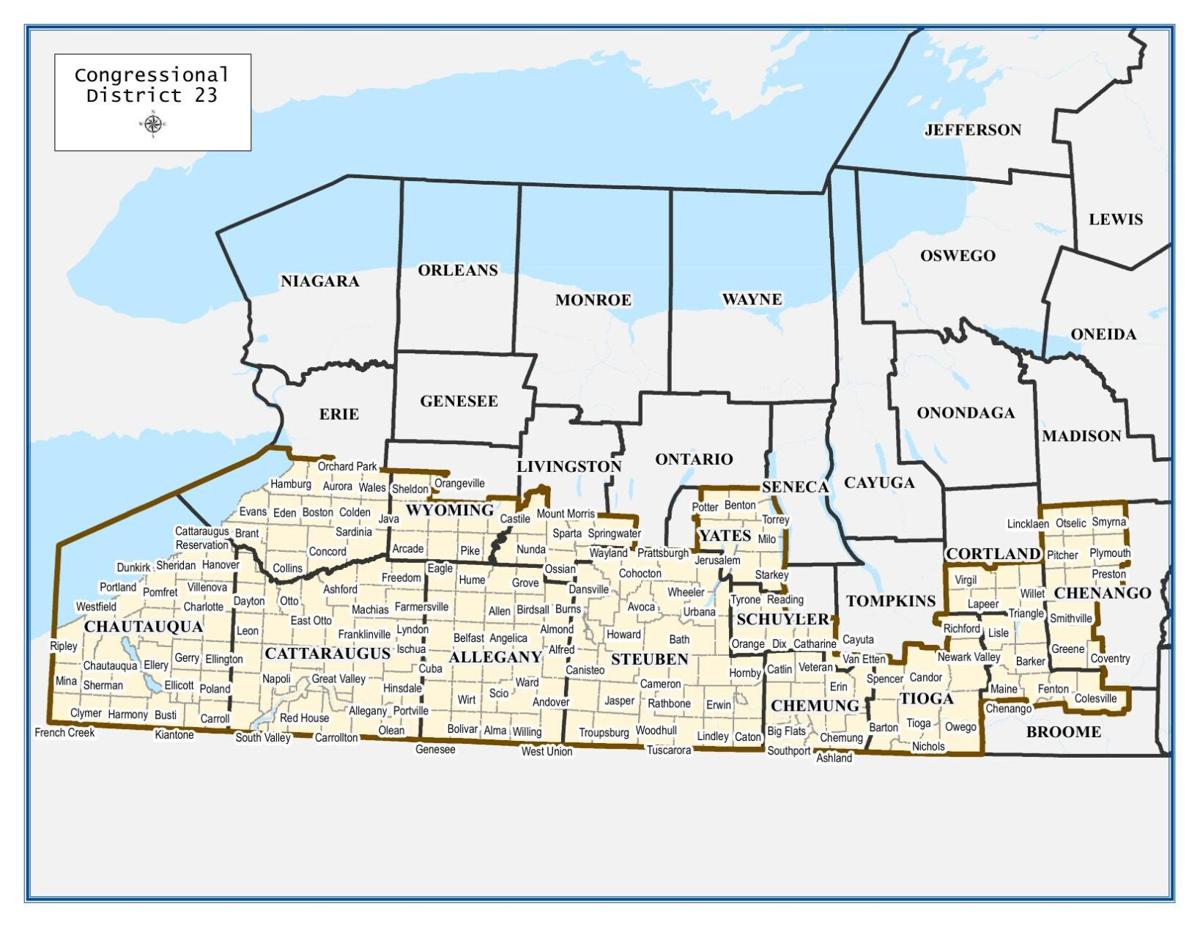 The new 23rd District, in contrast, is a horizontal Southern Tier district similar to, but larger than, the current 23rd District served by Rep. Tom Reed, a Corning Republican who is retiring from Congress. The new district includes Hamburg, Orchard Park and the rest of the Erie County Southtowns.

And while it might seem surprising for a Utica-area representative to want to serve the Southern Tier and the Buffalo suburbs, Tenney noted in a statement that she has ties to the eastern end of the new district.

"My family business has been owned and operated in Chenango County since 1946, creating jobs for hundreds of people in our community over the years and contributing to our Southern Tier economy," Tenney said.

Tenney is the co-owner of Mid-York Press, a commercial printing and manufacturing firm that employs about 80 people in Sherburne, in Chenango County. Sherburne is in the proposed 19th District, a heavily Democratic enclave that stretches from Binghamton eastward all the way to the state line.

Tenney enters the 23rd District race with one huge advantage: money. She has $1.15 million in her campaign account.

That may help ward off other potential candidates in the heavily Republican district.

"If this is the map, I'm not going to primary Claudia," said Joe Sempolinski, a former aide to Reed who announced his candidacy for the seat several months ago.

State Sen. George Borrello, an Irving Republican, said he was interested in running for Congress, but he added: "Now that Claudia Tenney has announced, all I would say is that we will have to see what the final district maps look like. Things may change."

Cattaraugus County Republican Chairman Robert Keis said he spoke to former State Sen. Cathy Young of Olean on Monday, and that she continues to weigh a candidacy. He expects her decision by the end of the week.

Keis said he backs Young, but acknowledged that Tenney's cash advantage could scare off Young.

“Unfortunately, money counts almost as much as votes,” Keis said.

"The fact that New York could end up with such an egregious congressional map represents a failure for the state’s new redistricting process," wrote Nathaniel Rakich, a senior elections analyst at the FiveThirtyEight election blog.

While the maps don't violate the federal Voting Rights Act, "the rest of the lines are so heavily gerrymandered they will be non-competitive," said Susan Lerner, executive director of Common Cause New York.

Fourteen Republicans from around the state who have served as presidential electors submitted the suit, marking the start of a legal challenge to district maps that Republicans say unfairly target many of the GOP's six New York seats in the House of Representatives.

Despite precedent, GOP hopes for success in reapportionment challenge

Though the New York GOP is reduced to almost afterthought status in Democrat-controlled Albany, the party harbors at least a glimmer of reapportionment hope through its suit slated for arguments Feb. 24.

“Claudia Tenney is a fantastic Representative for the Southern Tier, and a great Member of Congress," Trump said in a statement.

Some hot topics for a cold Sunday:

The woman who would be the Southtowns' congresswoman lives near Utica, but she wants you to know that will soon change, and that she knows Buffalo and points south and a thing or two about being a hometown Republican representative in the Trump era.

Democratic leaders appear to be coalescing around Max Della Pia, a three-decade Air Force veteran who narrowly lost the party's congressional nomination in a primary in 2018, as their chosen opponent to challenge Rep. Claudia Tenney.

Rep. Chris Jacobs, an Orchard Park Republican, said he plans to run for re-election in the newly drawn 24th district, a heavily Republican enclave that would meander from the northernmost shores of the Niagara River to the Thousand Islands region – a driving distance of 256 miles – while bypassing most of metro Rochester.