For representatives of the Haudenosaunee Nationals men's 21-and-under lacrosse team – arriving in Ireland earlier this week for world championship competition in Limerick – the warm feelings began only moments after the team was on the tarmac in Dublin.

The players saw it as a gift: They had been given a chance, in a global sports spotlight, to respond on behalf of the Indigenous world, Kirst writes.

Irish customs officials formally acknowledged and accepted Haudenosaunee passports that represent the people of the Six Nations, providing an international courtesy that Nationals board member Rex Lyons said has not been offered with such grace and respect at other destinations in the past. In 2010, in the most prominent example, a team consisting of players from the Six Nations was unable to compete in the lacrosse world championships in Great Britain because those passports were not accepted.

"They treated us the way anyone would hope to be treated," Lyons said of officials from the Republic of Ireland.

Twenty-three nations are gathered at the University of Limerick for this "21U" tournament, but the goodwill over passports only underlines the larger meaning for the Haudenosaunee: Last month, they were able to send their men's and women's teams to the World Games in Birmingham, Ala. – a major step toward their dream of appearing in the 2028 Olympics – because players and administrators with Ireland Lacrosse, upset that the originators of the game were initially excluded, gave up their own spots so the Haudenosaunee could take part.

"This was a chance to show our respect and gratitude toward the Irish players and Ireland Lacrosse and the people of Ireland," said Leo Nolan, executive director of the Nationals, whose U21 roster includes five players from Seneca territories in Western New York. During the opening ceremonies, the Haudenosaunee presented Michael Kennedy, CEO of the Irish lacrosse organization, with a handmade basket, a traditional wooden lacrosse stick, and a letter of thanks and communion from Sid Hill, the Tadadaho - or spiritual leader - of the Six Nations, accompanied by a Two-Row Wampum, which symbolizes how different cultures and nations can exist side-by-side in harmony and peace.

“This is about peace and friendship, about respecting differences and seeing each other as full human beings, and that’s what lacrosse can show you,” said Claudia Jimerson of the Cayuga Nation.

For his part, Lyons said, Kennedy – on behalf of Irish officials, including the mayor of Limerick – presented the Haudenosaunee with such mementos as a stick and ball from the traditional Irish game of hurling. Lyons noted it was only the latest reminder of a growing connection: In March, representatives of the Haudenosaunee Nationals and Irish lacrosse marched together at St. Patrick's parades in both Buffalo and Syracuse.

Nolan and Lyons said the Haudenosaunee players added an emphatic exclamation point to the celebration with their opening performance: They defeated England, 14-3, before they lost Saturday to Team USA 13-2 as the tournament continued. 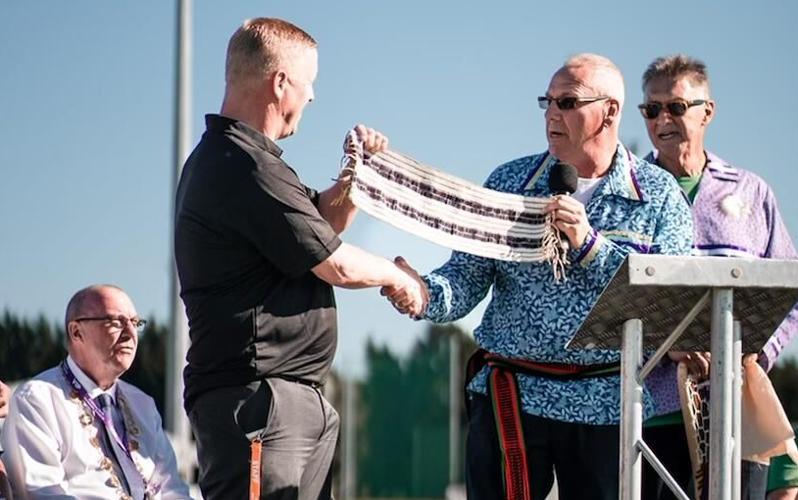 Rex Lyons (right), a board member of the Haudenosaunee Nationals, presents Ireland Lacrosse chief executive officer Michael Kennedy with a Two-Row Wampum, symbolizing the friendship between their programs and their nations, during the opening ceremonies this week for the 21-and-under national tournament at the University of Limerick. Leo Nolan, Haudenosaunee Nationals CEO, is behind Lyons. 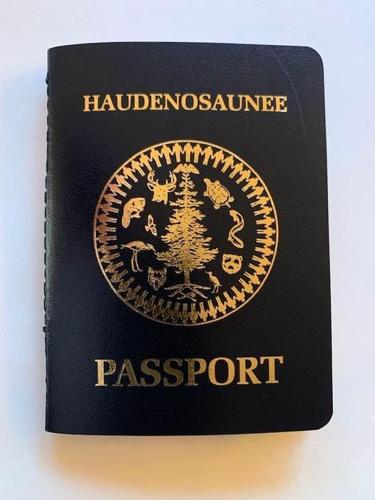 The Haudenosaunee passport, used this week by players and officials from the Six Nations to enter Ireland.