Subscribe for $1
Read Today's E-Edition
Share This
Watch now: How a remotely operated vehicle has aided the rescue of USS The Sullivans
0 Comments
Share this
Support this work for $1 a month
Ben Tsujimoto

Finding holes in the USS The Sullivans was the first goal toward righting the World War II-era Fletcher-class destroyer that began to list April 13. But when divers couldn't enter the water to assess the damage to the 80-year-old vessel due to high winds, the eyes of a drone meant time wouldn't be wasted.

Underwater drone footage taken April 20 and 21 by the U.S. Coast Guard's Deep Trekker remotely operated vehicle (ROV) shows how some of the work on the vessel is being completed without sending humans underwater.

The video clips, released via the Buffalo and Erie County Military & Naval Park and available on BuffaloNews.com, offer a firsthand look at the Sullivans' hull below water level and the murky, underwater environment around it.

The Deep Trekker's DTG3 model used by the U.S. Coast Guard is about 13 inches wide, 10 inches tall and 11 inches long. It's operated manually from above water, with the drone connected to a control apparatus with a 250-foot tether, said Lt. Ian Johns, chief of the Incident Management Division of the Coast Guard's Buffalo sector.

"It can go in places where divers can't," he added.

The Deep Trekker was dropped three times into the Buffalo River during the first week of the rescue operation.

"The biggest thing we were looking for in this specific case was the stability of the vessel, where it's resting on the lake bed, but also to check for pollution," Johns said of the Deep Trekker's purpose in Buffalo. "With the lighting package, we could see – is there oil not just on the surface but below it?"

Before water could be pumped from the listing ship, contaminants – oily waste and debris remaining in the ship's hull after it was decommissioned by the U.S. Navy – needed to be removed. The Deep Trekker's LED flood light came in handy for that mission. The lights can help distinguish oily waste from pure lake water. As of Friday, 7,510 gallons of oily waste and 42 cubic yards of debris had been removed from The Sullivans' site.

Capt. Lexia Littlejohn, commander of the Buffalo sector, said last year was the first time in her more than 15 years working for U.S. Coast Guard sectors, that she's had an ROV at her disposal – the Coast Guard used contractors for underwater drones in the past.

"It's absolutely higher-end technology," Capt. Littlejohn said. "I think speed, efficiency and accuracy, it's helped with all of those things."

Remotely operated vehicles have been used in underwater missions since the 1960s, according to ROV.org, but recent advances in technology – better battery life, low-light vision and high-definition cameras – have made it a viable tool for U.S. Naval and Coast Guard tasks.

More than anything, the underwater drone serves as a scout to "get eyes below water," said Andre Clansy, public affairs officer for the Buffalo sector of the Coast Guard. The drone serves as a complement to – not a replacement for – divers working to repair the naval ship.

After showing its value at a training exercise in August, the Deep Trekker was summoned for the Oswego Harbor Power Plant oil spill in March and then in the environmental cleanup stage of the USS The Sullivans.

The ROV's use for The Sullivans extends beyond pollution identification, though. When sharp winds deterred divers from entering the water, the Deep Trekker helped rescue teams gather information about the ship's location in respect to the pier, areas at which it touched the river bottom and a basic sense of the hull's status without jeopardizing workers' safety.

The drone's value in identifying holes in a ship is somewhat limited. The videos did reveal areas of corrosion, sections of the hull covered by plant-life and zebra mussels and a rough sense of how far divers would be able to see. Littlejohn said much of the divers' work on The Sullivans was done by feel in the murky water, but in clearer water conditions, the Deep Trekker could potentially be used to identify breaches in a ship.

For the Coast Guard, one challenge is navigating the drone underwater.

"It takes a little bit of getting used to as far as the controls ...," Johns said.

From left to right, corresponding to the image above, the day and time of the video are listed, followed by the brand and then a series of locational data: the camera angle (-13), with positive numbers representing angle upward, and negative showing angle down; the temperature of the water in Celsius (4C); the heading, or compass direction of the bow of the ship, in degrees from due north (127); finishing with the ROV's depth in the water, in meters.

Watch now: How a remotely operated vehicle has aided the rescue of USS The Sullivans

Sullivan granddaughter thanks ship's responders, calls for accountability for sinking

"I think there's a call for an investigation," said Kelly Sullivan. "It's been taking on water since the '90s. People don't understand that this is a long time coming."

In his first assessment below deck, Shane Stephenson, director of museum collections, called the damage to the ship's interior "considerable," but he remained optimistic that restoring the museum ship would be key to its "living history." 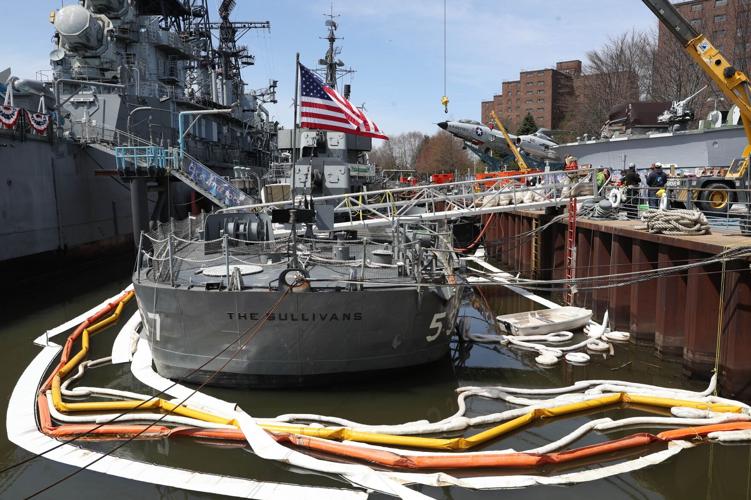 The U.S. Coast Guard's remotely operated vehicle, or ROV, has been an important part of USS The Sullivans' recovery. The decommissioned naval ship's list had decreased to 4 degrees as of Friday.

Explaining the data listed atop on the Deep Trekker video.