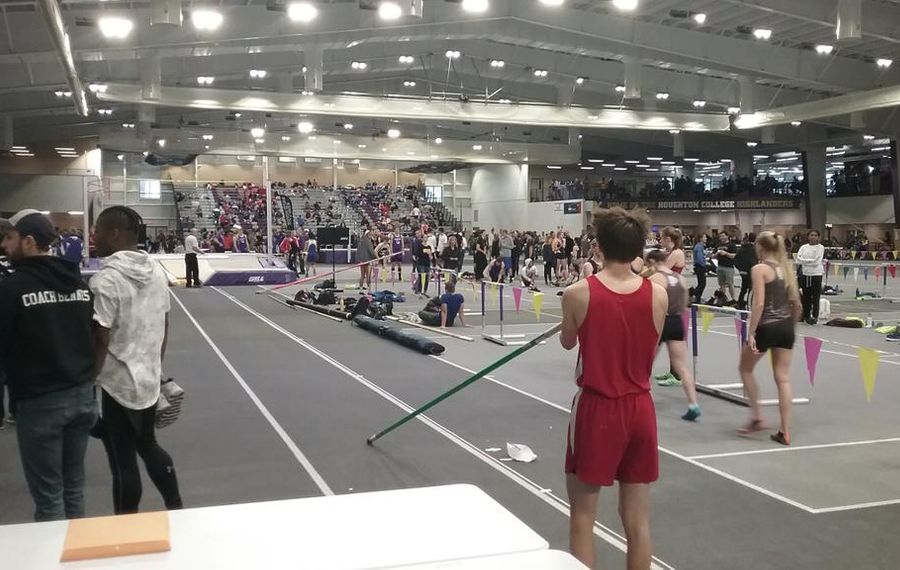 HOUGHTON – Two of the most anticipated races of the girls side of Section I Indoor Track and Field state qualifier at Houghton College on Thursday were at the ends of the running spectrum: the 3,000-meter run, and the 55-meter dash.

The long and the short of it was that athletes from Lockport won both events.

Much of the attention on the dash was on Jada Kenna, a talented seventh-grader from Tapestry, and Jenna Crean, the Section VI record holder from Orchard Park. That made it easy to overlook Kahniya James of Lockport, who had the fastest qualifying time at 7.24 seconds.

“They are very good competition,” James said about Crean and Kenna. “They push me a lot.”

There isn’t much strategy at that distance. James said it’s simply a matter of putting your head down and running as hard as you can. But there’s a reward at the end for the first two finishers – a trip to the State Championships in Staten Island.

James took part in that event last year, but it doesn’t get old.

“I’m very excited about it,” she said.

Kenner can pack for New York City as well. She won the 300-meter dash in 39.56, which ranks with the best times in the state. Not only is Kenner good now, but she has five more years to perform on her performances. In the meantime, she’s not intimidated.

“Ever since I started track when I was nine, I wanted to make it big,” Kenner said. “If you have a small mindset, you can’t make it big.”

In the 3,000, Sydney Nowicki of the Lions got a good jump on Megan McLaughlin of East Aurora/Holland, and raced to a victory in 10 minutes, 32.77 seconds. Nowicki pulled away rather quickly.

“It took a couple of laps,” she said. “I didn’t see her shadow after that. She’s always there with me, but that happens to the best of us.'

The two have been good rivals this season with plenty of respect between the two of them.

“Megan is a really strong competitor,” Nowicki said. “She’s beaten me a couple of times, and I’ve beaten her a couple of times. She’s definitely my favorite person to run against, because she pressures me to do my best. I just wanted to get to the States, but there’s nothing wrong with a win.

“Last season in cross country was really tough for me, so it’s really good to come back and change everything up. I’ve been working on my kick in indoor, working on longer distances. It was rewarding to come back to win.”

Both Nowicki and McLaughlin are off to States in Staten Island – the second straight trip for Nowicki.

“It is so much fun, because they give you extra time to interact with people from outside the section,” she said. “When you get to meet people who have the same love for running that you do, it’s special.”

McLaughlin is part of an East Aurora/Holland program that has produced quality and quantity in recent years. The quantity was apparent in the relays. Both the 4x800 and 4x400 teams won their races to advance to States.

Coach Walt McLaughlin couldn’t have been more pleased about how those teams did.

“Pretty awesome,” he said. “That was the plan. They knew what they had to do. At the end of the day, the competition is great and they had to execute. That’s what they did.”

The 4x800 team consisted of Celia Cocca, Megan McLaughlin, Maggie McLaughlin and Ava Danieu. In the 4x400, the runners were Olivia Ranalli, Cocca, Paige Hoffman and Danieu. The toughest part might be trying to figure out who goes where in the relays, There are a lot of moving parts to the equation.

“We worked it out during the season – the strengths and weaknesses of each lineup,” Walt McLaughlin said. “We just had to figure out what worked the best.”

The top two finishers in each event automatically go to States, and third-place finishers also head to Staten Island if they put up a time or distance that meets the State standard. That means Section VI could make some noise on March 2.

“It will be really exciting to see how we do as a section next weekend,” Walt McLaughlin said.