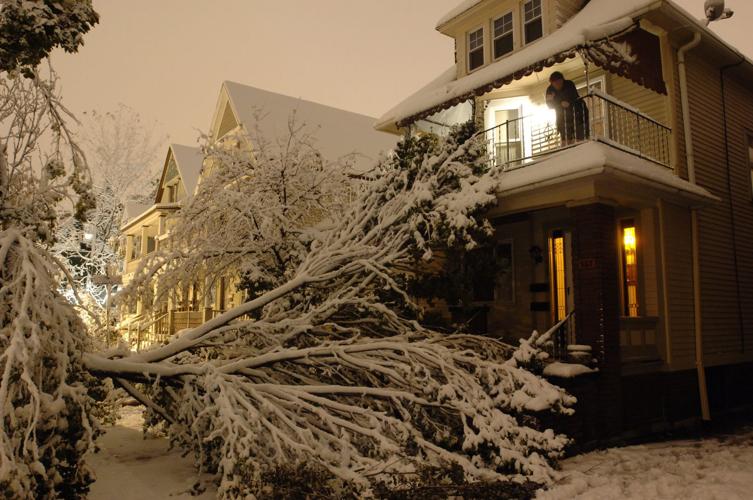 The top half of a large box maple tree rests on the home of Joan Casey (on porch) after a bizarre October snowstorm Oct. 12, 2006. (Derek Gee/Buffalo News) 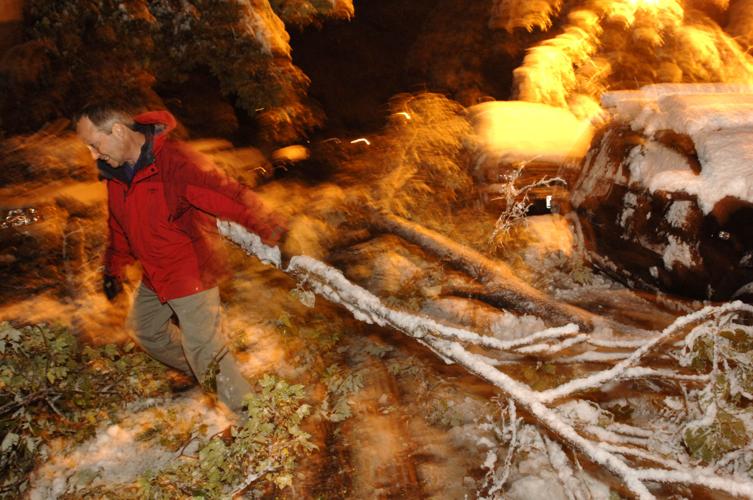 Remember the devastating snowstorm 10 years ago?

The freak storm took its greatest toll on the trees.

Some 57,000 trees were lost on public streets and in parks – 11,100 in Buffalo alone, including the Olmsted parks.

Amherst and Williamsville were right behind with 11,000 downed trees.

In all, 18 municipalities faced the sudden loss of canopy cover on public streets and lush vegetation in parks.

“The biggest part of the populated areas of the metro Buffalo area were hit really hard,” recalled Paul Maurer, the radio executive who responded to the calamity by founding Re-Tree WNY, the all-volunteer group he chairs.

The actual damage when including privately owned trees, Maurer estimated, was three to four times that much.

Re-Tree WNY began with the goal of planting 30,000 trees, with an equal amount to be matched by each municipality.

Ten years later, that number stands at 28,112, and each municipality with the exception of Buffalo has reached its goal, with Buffalo well on the way, Maurer said.

In addition, Re-Tree WNY gives away seedlings to residents from a Department of Environmental Conservation nursery, which aren’t reflected in the total. The group also started its own tree farm.

During the past 10 years, Re-Tree WNY has raised $1.4 million to buy trees, far less than the cost to plant that many using contractors rather than volunteer labor, Maurer said.

David Colligan, who helped start Re-Tree WNY, attributed fundraising success to cooperation instead of competition. “It’s the only example I know in Buffalo’s history where an incident occurred where three not-for-profits were able to raise $1 million from a cold start for the same purpose in one year’s time,” Colligan said, referring to Re-Tree WNY, the Buffalo Green Fund and the Buffalo Olmsted Parks Conservancy, of which he was on the boards of all three at the time.

Colligan was involved for two years, before leaving to chair the conservancy.

“Paul’s been going for 10 years,” Colligan said. “He built a great team, but his passion has kept up for eight more years. I’m so impressed with that.”

Some 50 organizations have given money, with the largest sums coming from the Buffalo Sabres Foundation, National Grid, Dore Landscape Associates, Fisher-Price and The Buffalo News.

Another $150,000 is still needed to finish the plantings.

Maurer praised the response made by several cities and towns, but singled out Town of Tonawanda’s efforts.

“They did the best of everybody,” Maurer said. “They really embraced our idea, and started their own tree farm.”

Jack Schifferli, Tonawanda’s forestry supervisor, said the town evaluated every tree and was particular about what was removed. FEMA guidelines on tree removal weren’t always followed, he said, if it was felt the tree was salvageable.

“We pruned a lot of the trees instead of removing them, because we knew we could always go back and do that if we had to,” he said.

“Since then, we have replanted every single tree removed from the storm. Then we’ve had a very aggressive trimming and a pretty aggressive planting, using a lot of state Department of Environmental Conservation grants for the planting.

Trees grown in Tonawanda’s tree farm were put in what Schifferli called an “environmental justice area” in a low-income section of town. The town Boys and Girls Club earned a first-place community service award from New York State for their work in raising and planting the trees.

Buffalo has had the greatest challenges, Maurer said. Re-Tree WNY gave the Buffalo Olmsted Parks Conservancy close to $100,000 for planting, he said.

“The city has been very cooperative, but they had a major task ahead of them,” Maurer said. “It’s not the same kind of situation. There are more rental properties, and people generally are not going to be as willing to get involved with a project like this. Also, many properties on the East Side are abandoned or have been torn down.”

Andy Rabb, Buffalo’s deputy commissioner for parks and recreation, said the city is in surprisingly good shape considering the devastation 10 years ago.

A citywide street inventory conducted in 2014 found 2,000 more trees than were counted in 2003, three years before the October storm.

“That’s hugely positive news,” said Rabb, a former city forester. “We were hit with a really unique and all-encompassing storm. Every single tree was affected by that. The community really pulled together to say an urban forest was important.”

Maurer said a variety of trees are now planted on streets to reduce the risk of pest infestation or disease.

When Re-Tree WNY began, the goal was to reach its target in five years.

But Maurer said the Great Recession put replanting on the back burner for awhile when it came to funding priorities. Now, as the finish line nears, the emerald ash borer is threatening to destroy all of the region’s ash trees.

How much of a problem is that? One in five trees is an ash tree, compared to the statewide average of 1 in 10, Maurer said.

“This could be worse than any storm that has hit the area,” Maurer said.

He said Re-Tree WNY plans to stick around to help address this problem, too.

“We would like to be a factor in helping out with this,” Maurer said. “It’s a much bigger lift than anything we’ve done before.”

"Heavy lake-effect precipitation would be inevitable, with thunder, but the extreme cold aloft would be modified by the surface warmth, or so we thought."

Study: COVID-19 remains alive on some of these foods for up to a week

PennyWise Episode 89: 5 tips for donating your time or money this holiday season

PennyWise Episode 89: 5 tips for donating your time or money this holiday season

How to keep your pet safe during winter

How to keep your pet safe during winter

Survey: Senior adults are not excited about going to the doctor

Survey: Senior adults are not excited about going to the doctor

The top half of a large box maple tree rests on the home of Joan Casey (on porch) after a bizarre October snowstorm Oct. 12, 2006. (Derek Gee/Buffalo News)