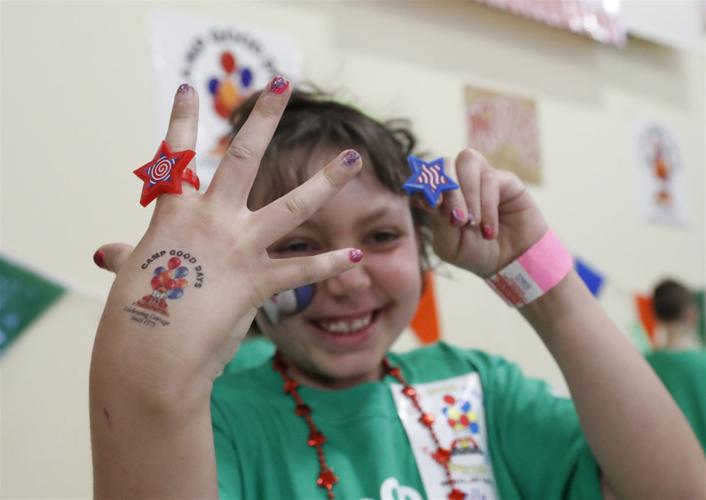 Bella Phelan shows off two of the many prizes she picked out at the Junior Camp Good Days carnival, one a ring for herself and the other a ring for her sister Peyton. Peyton was the donor for Bella's bone marrow transplant. (Sharon Cantillon/Buffalo News) 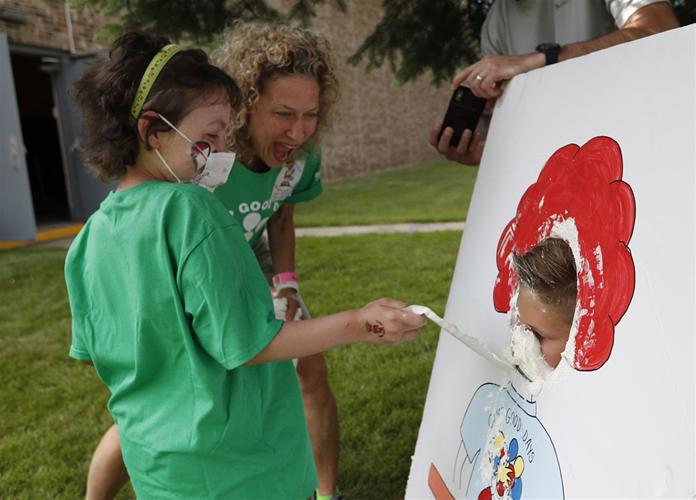 During the kids carnival, Bella Phelan puts a pie in the face of volunteer Max Glamuzina, 9. Looking on is her camp counselor Colleen Collins. (Sharon Cantillon/Buffalo News) 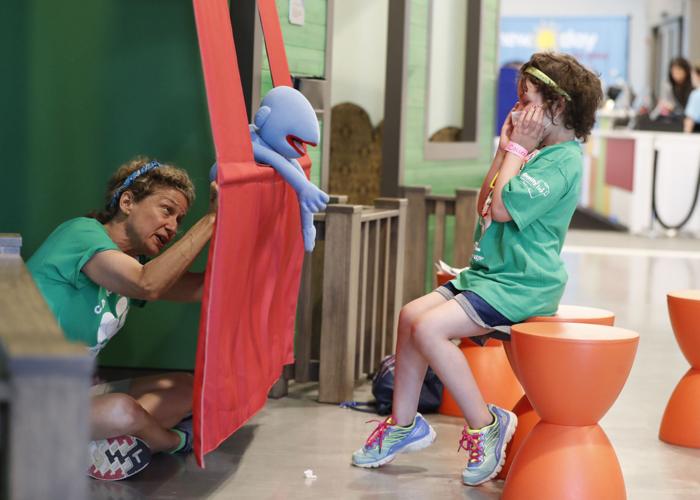 Isabella “Bella” Phelan, 7, squeals with delight as Junior Camp Good Days counselor Colleen Collins introduces her to a puppet character at the Explore & More Ralph C. Wilson Jr. Children’s Museum. Bella was on a field trip for kids with cancer or who have survived it. (Sharon Cantillon/Buffalo News)

Support this work for $1 a month
By Maki Becker

Screaming on a roller coaster, or splashing your feet on a splash pad

A red, white and blue heart painted on your cheek.

Being a regular kid.

Isabella "Bella" Phelan's 7-year-old body has gone through so much already, after beating back B-cell acute lymphoblastic leukemia three times.

Last week, she was among 54 children ages 4 to 7 who either have cancer or have survived cancer who were treated to four delightful, carefree days at Junior Camp Good Days.

No thinking about chemo. Or radiation. Or needles or any of that stuff.

"She hasn't stopped talking about it," her mother, Jamie Phelan, said Saturday in a phone interview before picking her up from her final day there.

Bella has come home every day a little tired, but elated about all the fun she has had at the camp based at St. Philip's the Apostle Church in Cheektowaga, where just shy of 100 volunteers were on hand to make sure every kid had a memorable time.

"I rode all the rides at Fantasy Island!" Phelan said her daughter gushed after that field trip.

It was just over three years ago when Bella was first diagnosed with leukemia.

"She had been sick off and on for a couple of months," her mother recalled. In the week or so before they learned what was ailing her, Bella was fatigued, pale and complaining of body aches.

"She was low energy, and that was not like Bella," her mother said.

Tests revealed it was leukemia and she began chemotherapy. She went into remission and attended her first Junior Camp Good Days that summer.

But last year, the cancer came back and she underwent a more intensive form of chemo to prep her for a bone marrow transplant. Her donor: her big sister, Peyton, who was 11, at the time.

"She was a perfect match," Phelan said.

"She did really good with that," Phelan said. After one more round of the new therapy, Bella was declared back in remission – and that meant Bella could go back to Junior Camp Good Days.

Bella had to wear a face mask when she went outside, and the staff paid extra attention when she complained of a headache. But none of that stopped her from enjoying the camp. She raced from one carnival activity to the next, gathering as many tickets as she could so she could collect prizes like little plastic rings for herself, her sister and her counselor.

The organization has been great to the whole family, Phelan said. It has offered a special camp for siblings of cancer patients, like Peyton, and provided family entertainment for the whole family.

"Our life has changed so much with this 'new normal,' " Phelan said. "They help us get away from it and be a family again. They're just amazing."

An estimated 60% of people with dementia will wander and become lost at some point, as they lose their ability to recognize familiar places and faces,

When it comes to picking the best exercise to lose weight, there is no one right answer; but variety is key. Get that and more recent health news here.

After a pandemic-related surge, behavioral telehealth is losing momentum

Patients and politicians hailed telemedicine at the beginning of the pandemic — first for its safety but also for its increased convenience and potential to extend care to rural areas and neighborhoods without specialists — but hints of skepticism are creeping in.

A common nail salon tool may cause DNA damage and mutations in human cells, research finds

Radiation from nail dryers may damage DNA and cause cancer-causing mutations in human cells, a new study has found — and that might have you wondering whether your regular gel mani-pedi is worth the risk.

Eating smaller meals and cutting calories is a more effective way to manage weight than intermittent fasting, when consumption is restricted to a narrow window of time. That’s the conclusion of researchers from Johns Hopkins University School of Medicine who studied the eating, sleeping and waking patterns of 547 adults over a six-month period.

Officials say a 32—year-old mother in Massachusetts is expected to be charged in the killing of her two children and the injuring of her infant son. Authorities arrived at a house in Duxbury on Tuesday night after receiving reports of a woman jumping out of a window. They found her and the children unconscious with obvious signs of trauma. Plymouth District Attorney Timothy Cruz says the mother, Lindsay Clancy, remains hospitalized and will be arraigned on homicide charges after she is released. He says it appears the children were strangled. Police and firefighters responded to the home after getting a 911 call from a male resident who reported the woman jumped out the window.

Scientists say delivering gene therapy directly to the brain holds great promise. The first brain-delivered gene therapy on the market was recently approved in Europe and the U.K. for a rare genetic disorder called AADC deficiency. It causes developmental delays and movement disorders in kids. New Jersey drugmaker PTC Therapeutics plans to seek approval for the treatment in the U.S. this year. Meanwhile, about 30 studies in the U.S. are testing gene therapy directly to the brain for other disorders, including Alzheimer’s and Parkinson’s. Challenges remain, especially with diseases caused by more than a single gene. But scientists say the evidence supporting this approach is mounting.

The family of a student who died from alcohol poisoning while pledging a fraternity will receive nearly $3 million from Bowling Green State University to settle its hazing-related lawsuit. A copy of the agreement announced Monday says the family of Stone Foltz and the university will work together to eliminate hazing on college campuses. A university investigation found that Foltz died of alcohol poisoning in March 2021 after a fraternity event where there was a tradition of new members attempting to finish a bottle of alcohol. Both sides say the settlement will allow them to focus on ending hazing.

Is Your Gas Stove Making You Sick? Experts Weigh In

AP sources: Biden to pick Zients as his next chief of staff

President Joe Biden is expected to name the man who ran his administration’s initial response to the COVID-19 pandemic as his next chief of staff. Word of Jeff Zients' hiring comes from two people familiar with the matter who spoke to The Associated Press on condition of anonymity. Biden’s current top aide, Ron Klain, is preparing to leave the job in the coming weeks. Since his role as the administration’s COVID-19 response coordinator, Zients has returned to the White House in a low-profile position to work on staffing matters for the remainder of Biden’s first term.

Bella Phelan shows off two of the many prizes she picked out at the Junior Camp Good Days carnival, one a ring for herself and the other a ring for her sister Peyton. Peyton was the donor for Bella's bone marrow transplant. (Sharon Cantillon/Buffalo News)

During the kids carnival, Bella Phelan puts a pie in the face of volunteer Max Glamuzina, 9. Looking on is her camp counselor Colleen Collins. (Sharon Cantillon/Buffalo News)

Isabella “Bella” Phelan, 7, squeals with delight as Junior Camp Good Days counselor Colleen Collins introduces her to a puppet character at the Explore & More Ralph C. Wilson Jr. Children’s Museum. Bella was on a field trip for kids with cancer or who have survived it. (Sharon Cantillon/Buffalo News)