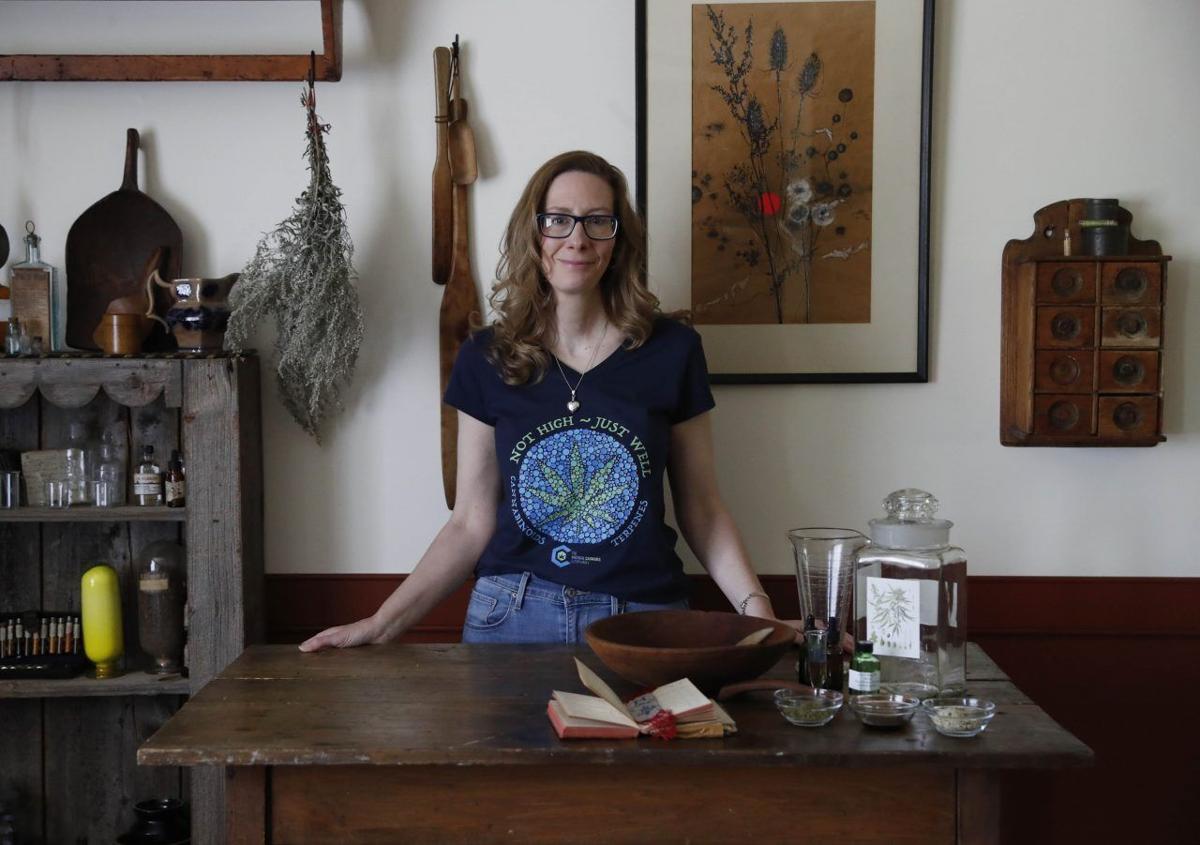 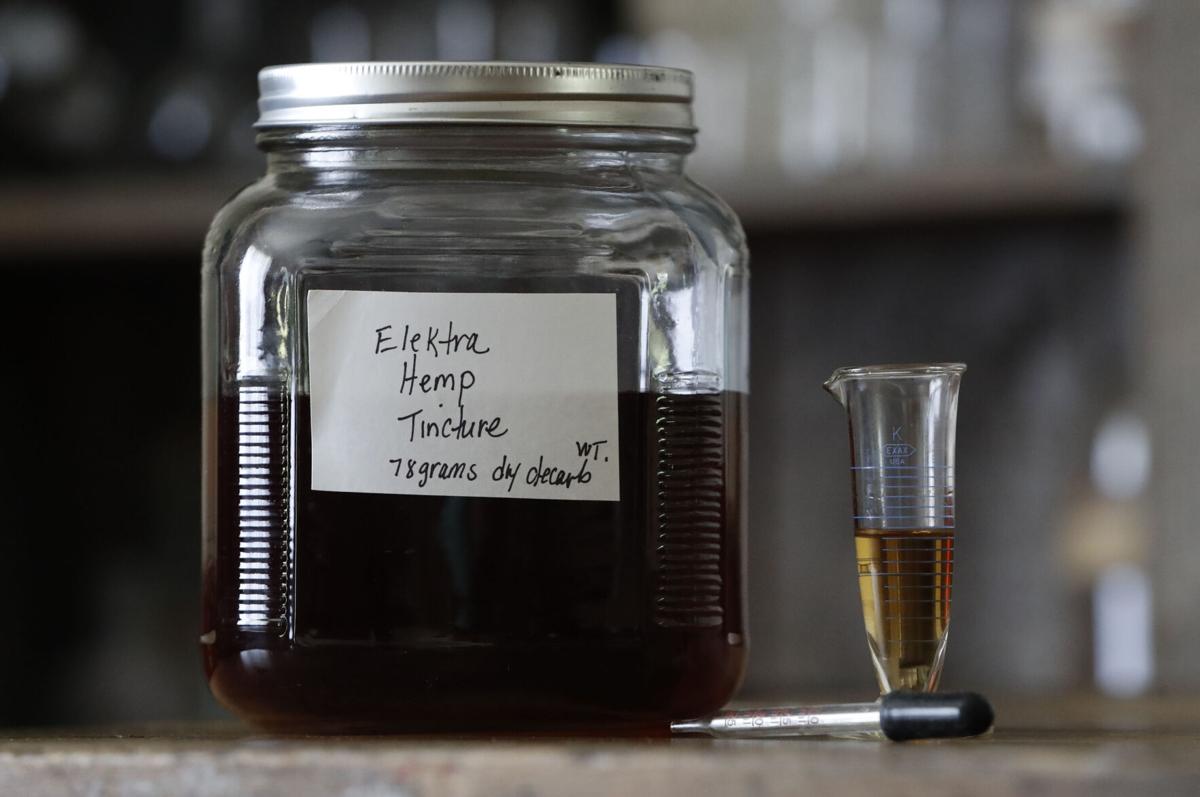 Penelope Crsecibene, of East Pembroke, is a medical marijuana advocate who has studied home growing. She is the New York administrator for The Medical Cannabis Community and will be making educational videos for online courses on how to prepare the herb as medicine and understanding how it works in the body. She makes a hemp tincture with industrial hemp which contains CBD and the legal limit of .29 percent of THC. She said the tincture would work much more effectively with a higher THC level for those suffering with severe chronic pain and other ailments. Photo taken at her home, Friday, June 7, 2019. (Sharon Cantillon/Buffalo News)

An Albany bill that would legalize the recreational use of cannabis would allow up to six marijuana plants to be grown in a person's home or yard.

That's a key difference from the legalization plan Gov. Andrew Cuomo proposed earlier this year as part of his budget package. Cuomo called for allowing only patients enrolled in the state's medical marijuana program to be allowed to grow up to four plants at a time. The governor eventually dropped his legalization proposal from budget talks.

The fate of the Marijuana Regulation and Taxation Act remains unclear in the final days before the New York State Legislature session ends June 19.

Advocates are still pushing for legalization but have encountered resistance from some suburban Long Island and Westchester lawmakers, as well as upstate Republicans, who say marijuana legalization will worsen problems of people driving while high and harm the public’s health. Cuomo said the opposition is based on politics. A Siena poll on Monday found marijuana legalization has the support of 55% of New Yorkers, compared with 40% who oppose it.

So how would home growing work?

The Buffalo News turned to Penelope Crescibene of East Pembroke for some insight. She is an advocate with the Western New York chapter of the National Organization for the Reform of Marijuana Laws and a medical marijuana educator with TheMedicalCannabisCommunity.org. She has studied the health and wellness benefits of cannabis through the Cannabis Training University, a Denver-based online school. She uses hemp flower, which is legal, to make tinctures and lotions that contain CBD but not THC.

How much bud, or flower, do you get from one marijuana plant?

That depends on the kind of plant, Crescibene said. Regular seeds can be planted indoors or outdoors and can produce big plants – but only the female plants, she said. There are auto-feminized seeds that are basically guaranteed to be female and grow quickly and well without too much fussing about how much light they get. But they don't produce as much as the regular seeds.

"Every individual has a different cannabinoid receptor system so they process it so differently," Crescibene said. "For my medical needs I probably wouldn't need more than six plants a year of even a small yield, like less than a pound. But I've heard from other medical patients who say there's no way six plants would get them there because of the pain they're in."

"The learning curve is huge," she said. "They might be lucky to get a couple of ounces."

Can you grow marijuana outside in a climate like Buffalo's?

Yes, Crescibene said, but "you're not going to get a 12- or 13-foot plant like you see in pictures like in California or Colorado."

Like many crops, marijuana is planted in the spring and generally harvested in the fall. Some people manage to turn around two crops in one season. But it's much easier indoors, although you need an indoor grow tent, LED grow lights and exhaust fans, a setup that can cost several hundred dollars.

"It's quite technical if you want quality medical, but the average guy might just throw a seed in a pot on a porch," she said.

Can you smoke or otherwise consume the flower right off the plant?

"There's a harvest process," she said. "If you're going to smoke it, there's a curing process you need to do."

That entails taking the flower or bud and "letting it sit in a jar" for a minimum of 30 days. You have to open the jar up from time to time to let some of the moisture out or it can get moldy.

It's a shorter process for making tinctures using cannabis – alcohol-based extracts – or other products that are infused with cannabis, she said. For such purposes, the flower only needs to dry about seven days.

Is it cheaper to grow your own?

It definitely would be. Buying a monthly supply of medical marijuana through New York's medical marijuana program can cost from $300 to $700. That includes products like lotions infused with cannabis, which patients use for pain relief. A container of such a lotion bought through the program costs about $200.

Is it risky to be growing marijuana at home?

"You're going to have to keep your mouth shut, legal or not," Crescibene said. "You don't go around advertising it."

Heavy use of marijuana by teens and young adults with mood disorders is linked to an increased risk of self-harm, suicide attempts and death, a study found.

A team of University at Buffalo researchers has received a nearly $1 million grant from the Foundation for Food & Agriculture Research (FFAR) to test inclusive urban agriculture.

'Fat but fit' is a myth when it comes to heart health, new study shows

The negative effects of excess body fat on heart health can't be canceled out by maintaining an active lifestyle, according to new research.

Some cold-weather wisdom is light on facts. This season, don’t let these winter health myths get the best of you.

Here are a few great ways to make dealing with cabin fever a little easier.

Tips on how to quit smoking for good

How to eat healthy when ordering takeout

How to eat healthy when ordering takeout

Penelope Crsecibene, of East Pembroke, is a medical marijuana advocate who has studied home growing. She is the New York administrator for The Medical Cannabis Community and will be making educational videos for online courses on how to prepare the herb as medicine and understanding how it works in the body. She makes a hemp tincture with industrial hemp which contains CBD and the legal limit of .29 percent of THC. She said the tincture would work much more effectively with a higher THC level for those suffering with severe chronic pain and other ailments. Photo taken at her home, Friday, June 7, 2019. (Sharon Cantillon/Buffalo News)