Meditation is an ancient religious practice, dating back thousands of years as a religious tradition in faiths like Hinduism and Buddhism. And while Western health and wellness traditions have promoted meditation for decades, business is booming the last few years, especially for meditation apps.

“Bodhisattva” is a key idea in Buddhism. The word is constructed from the Sanskrit root bodhi, meaning “awakening” or “enlightenment,” and sattva, meaning “being.” The core meaning of the word is “a being who is on the way to becoming enlightened.”

As I explain in my book “Buddhism: A Guide to the 20 Most Important Buddhist Ideas for the Curious and Skeptical,” the word bodhisattva is understood in divergent ways by different groups of Buddhists.

Who is a bodhisattva?

In Theravāda Buddhism, which is most prevalent in Southeast Asia, the term is exclusively used to refer to Siddhartha Gautama, as the Buddha was known before he became enlightened. In this school of thought, the word bodhisattva can also refer to Gautama in one of his previous rebirths as he worked toward enlightenment through numerous lifetimes as animals, people or other types of beings.

According to legend, Gautama was born as the crown prince of a kingdom in far northeastern India, but he gave up his throne and all of his riches in order to pursue enlightenment. Eventually, he fulfilled his destiny and transitioned from a being who is on the way to becoming awakened to a fully enlightened person – in other words, a Buddha.

In Mahāyāna Buddhism, practiced widely in East and Central Asia, the term bodhisattva can be used in a similar way. However, this form of Buddhism says that there are many more than just one Buddha; indeed, the ultimate goal of all true believers of Mahāyāna is to become a Buddha themselves. Most serious followers of this path take the bodhisattva vow to become recognized as bodhisattvas.

Additionally, in Mahāyāna belief, there are certain highly evolved bodhisattvas who have been practicing Buddhism for so many lifetimes that they have become superhuman divine beings. These so-called “celestial bodhisattvas” are said to have accrued immense merits and powers. However, they have intentionally chosen to delay becoming Buddhas in order to dedicate themselves to compassionately helping others. 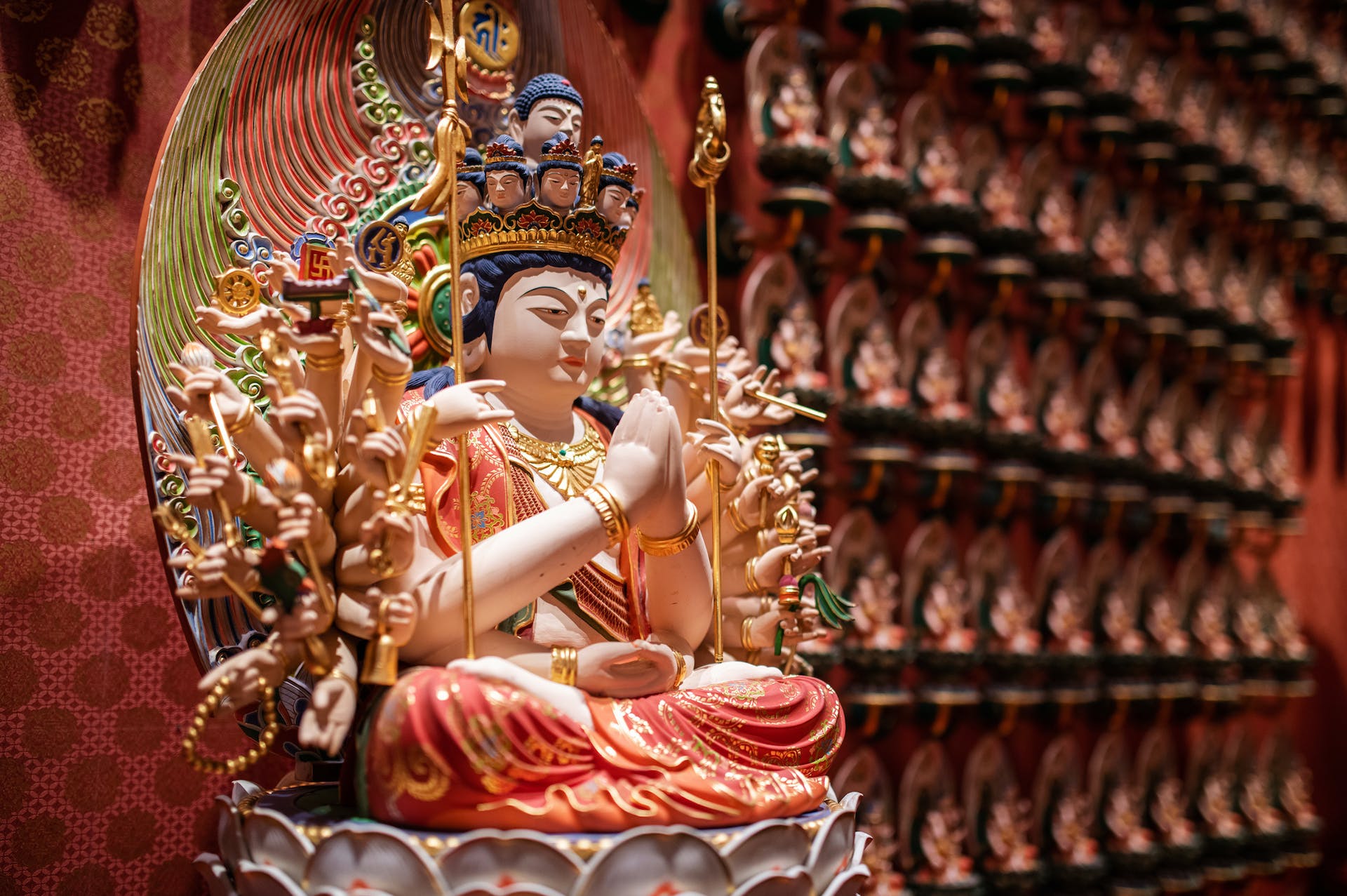 Boddhisatva Avalokiteśvara, considered to be a compassionate protector, is believed to regularly visit Earth. taikrixel/ via iStock Getty Images Plus

Why do bodhisattvas matter?

Some of the most famous advanced bodhisattvas, such as Avalokiteśvara, Kṣitigarbha, Mañjuśrī, Samantabhadra and Vajrapāṇi, are regularly prayed to and given offerings. Texts and mantras associated with most of them are regularly chanted in temples around the world. Devotees hope that the bodhisattvas, in their infinite compassion, will hear these calls and respond by sending blessings of health, good fortune and happiness.

Buddhists believe that celestial bodhisattvas reside in heavenly realms called Pure Lands located in faraway dimensions of the cosmos. The bodhisattva Maitreya, for example, is said to currently live in the Tuşita Heaven, where he is awaiting rebirth as the next Buddha of our world.

Because they can manifest in different bodies simultaneously, bodhisattvas can also appear on Earth disguised as humans, animals, or other types of beings. For example, Tibetan Buddhists believe that the Dalai Lama is a manifestation of the bodhisattva Avalokiteśvara, called Chenrezig in Tibetan, who regularly comes to earth to spread his message of compassion among humanity.

Pierce Salguero does not work for, consult, own shares in or receive funding from any company or organisation that would benefit from this article, and has disclosed no relevant affiliations beyond their academic appointment.

Our Lady of the Rocks, Kotor Bay, Montenegro

Meditation is an ancient religious practice, dating back thousands of years as a religious tradition in faiths like Hinduism and Buddhism. And…

This sunscreen for your scalp has been recalled

What to gift yourself this Valentine's Day

What to gift yourself this Valentine's Day