Subscribe for $1
Read Today's E-Edition
Share This
Good Morning, Buffalo: As U.S. swelters, some turn to Buffalo for the weather
0 Comments
Share this
Support this work for $1 a month

Bob Madden hasn't lived in Buffalo since 1994, but he's just about ready to move back. The St. Joe's graduate lives now in Austin, Texas, which is on track to set its record for most 100-degree days in a year.

"I've just about had it with this summer," Madden said earlier this week.

Madden's experience with oppressive heat in Austin mirrors that of several recent visitors to Buffalo and Niagara Falls who escaped from their sweltering summers to bask in our moderate July weather.

Climate change experts have pointed to Western New York's moderate temperatures – a product of winds of the Great Lakes – as one reason why the region could serve as a climate refuge city.

New Era gets new funding as major sports leagues take minority ownership stakes: New Era Cap Co. has long had close ties with its biggest customers in professional sports leagues. Now, the Buffalo-based sports apparel company is making those ties even tighter by bringing in Major League Baseball, the National Football League and the National Basketball Association as minority owners under a new investment deal that also gives the private-equity firm that is its largest minority owner an even larger stake. Read more

Five burglaries and a second chance. Then two more burglary charges: Police arrested a Buffalo man Sunday and charged him in connection with two burglaries that morning on Kensington Avenue. The suspect had pleaded guilty to five burglaries about a month earlier, and his case was diverted to mental health treatment court. Read more

Two Buffalo men charged with threats connected to Tops Markets mass shooting: The two men were charged Thursday in separate incidents for threats related to the racist mass shooting in May at the Tops Markets on Jefferson Avenue. Read more

Joaquin Phoenix supports Newfane sanctuary owner in cow dispute: A lifelong vegan, the Oscar-winning actor stands in solidarity with the sanctuary owner who was arrested after she refused to return two cows that ended up on her property. Read more

Court order changes rules in party enrollment ahead of New York’s Primary Day this month: The window for New York voters to change political party affiliation before the Aug. 23 primary is closing fast after a court decision Wednesday set a new deadline for Aug. 11. Prior to the reversal by a judge in Steuben County, voters would have had the unprecedented opportunity to change parties through Primary Day. Read more

Bikeshare stations installed across Buffalo, including at Darwin Martin House: The installation in Buffalo’s Parkside neighborhood came about through a partnership between REDDY Bikeshare and Independent Health to expand to locations that did not have a bike station before. Read more

Gusto’s Look Inside: Griffon Brewery and Gastropub: The Lewiston establishment offers the most dramatic views of the lower Niagara River you can get from a restaurant table. Read more

Debra Meyerson, stroke survivor and ex-Stanford professor, bikes across America bringing lessons and hope: Meyerson was a healthy, active professor of organizational behavior at Stanford University in 2010 when a stroke blindsided her. As she tried to grasp the enormity of her physical condition, another reality soon emerged. Her new circumstances would also take an emotional toll. She and her husband, who now live in Astoria, Ore., are on a cross-country biking mission called “Stroke Across America” to help others navigate the physical and mental dimensions of recovery. They will ride into Larkin Square next weekend for a talk before they continue their journey toward the East Coast. Read more

What’s the plan? Development officials have some ideas: Erie County has a new five-year economic development plan aimed at tackling the challenges the region faces in today's business climate. Those challenges include attracting and retaining workers in a tight labor market with record-low unemployment. Read more

Erik Brady: Curse of the Bambino’s connection to Buffalo: Joseph J. Lannin is a forgotten man of Boston Red Sox history – and Buffalo Bisons history, too. Lannin owned both teams at the same time. Read more

In his fifth season, Bills cornerback Taron Johnson 'getting better and better': Johnson is now entering his fifth year with the Bills after signing a three-year extension in October. The nickel cornerback has been a key part of the Buffalo defense, even in a quieter role. It’s a testament to the team's trust in Johnson that the Bills played more nickel defense than any other team in the league last season. Read more

Camp observations: Tempers flare again, but Josh Allen likes feisty practices: “When you bring in the guys that we've brought in, there's competition all over the place,” Allen said. “There's competition on their side of their ball, on our side of the ball. And then when we play against each other, guys are trying to fight for a spot on this team." Read more

Bills fans won't stop sending toilet paper to Von Miller: On the first day of training camp, linebacker Von Miller spoke for close to 10 minutes. But three words stood out from the rest. Three words reverberated across the region. Three words rallied a fanbase into immediate action. “Toilet paper’s different,” Miller said. He did not say it was bad. He did not say he was in peril. Nevertheless, Bills fans leapt to accomplish what was only a dream during shortages of the vital resource in March of 2020. “Four days later, I got all types of toilet paper in the mail,” Miller said Thursday. Read more

'4-8 is not a good look': Why UB linebacker James Patterson chose to return for fifth season: “Since I’ve been here, we’ve always been to a MAC championship game or to a bowl game, so that’s the expectation. We want to keep rising, and try to go to a New Year’s Six bowl. That’s always been the goal, to be a top 25 team, and to make it even better,” Patterson said. Read more

• The Buffalo Zoo has been a popular after-dark attraction this summer – so popular that officials have extended the colorful nighttime exhibit, Zoomagination. Check out Derek Gee’s photo gallery.

• The final days of a senior shelter dog in Niagara County are being filled with exciting adventures, Spectrum News 1’s Brianne Roesser reports. Roesser shares this touching tale about 12-year-old Lloyd, who, despite dealing with kidney failure and a tumor on his leg, has had time of his life.

• Are you game for a couple days of hell-raising (and hair-spraying) rock at Highmark Stadium? News contributor Michael Farrell previews back-to-back nights of “head-banging nostalgia” in Orchard Park. On Aug. 10, the quadruple bill of Mötley Crüe, Def Leppard, Poison and Joan Jett & the Blackhearts hits the Highmark stage. On Aug. 11, it’s Metallica’s turn.

• “Sunflowers are like people to me,” Joni Mitchell once said. The legendary singer-songwriter would be in her glory if she visited a Niagara County farm. Sunflowers of Sanborn is in bloom for the fifth summer, WIVB’s Hope Winter reports.

Have a great weekend!

It is not the first time that Feliciano has been critical of the Bills coaches.

'Return of Blue & Red' practice a taste of Bills Mafia for new players: 'It’s easy to fall in love with this place'

It was good, man. I really felt at home right when I walked out the tunnel," defensive end Von Miller said. "So today was a good day for me.”

Gabe Davis was the receiving star, and the Buffalo Bills’ offense put on an entertaining show for a big crowd Friday night at Highmark Stadium.

A jury awarded $3.9 million to Jazmon Morrison, who suffered a traumatic brain injury and bulging disc after slipping on a floor at Williamsville Suburban Safire Nursing and Rehabilitation Center.

Bills Mailbag: Opinions on the Wall of Fame, Josh Allen, the OL and Tom Brady

One thing that must be considered in Wall or Hall of Fame debates: If we let this guy in, are we swinging the door a lot more wide open?

The quartet of Luke Tenuta, Derek Kerstetter, Tanner Owen and Alec Anderson appeared to sing as part of a rookie ritual. 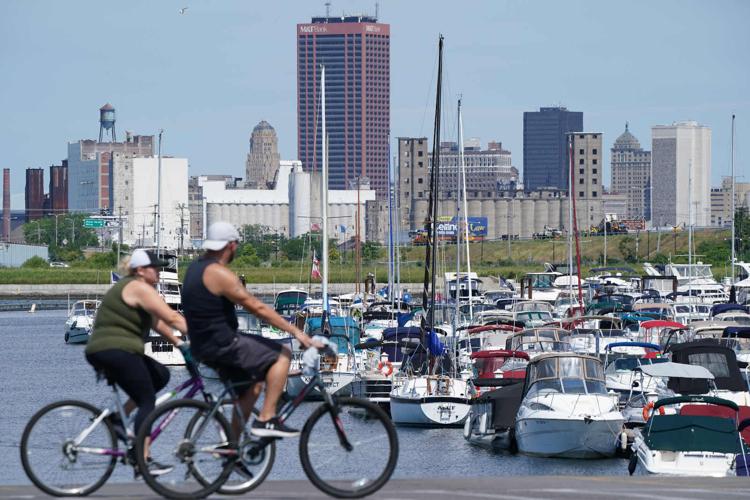 A pair of cyclists ride on the path past the Sun Life Marina in Outer Harbor State Park. 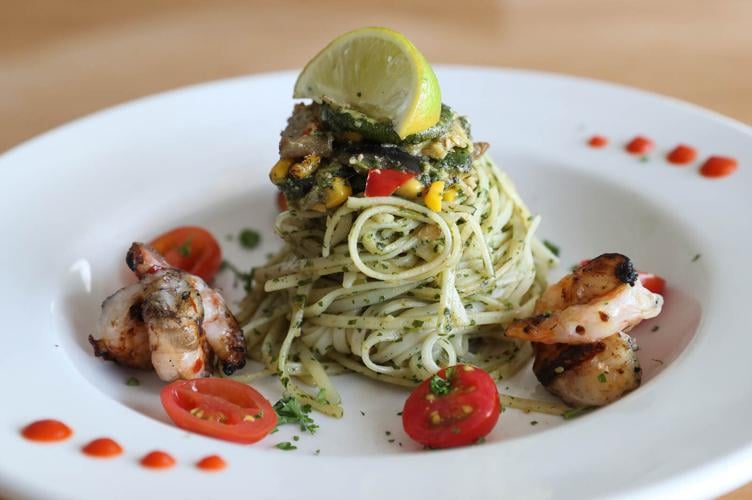 Farmer's Market "Pasta" Salad with shrimp at the Griffon Brewery and Gastropub. 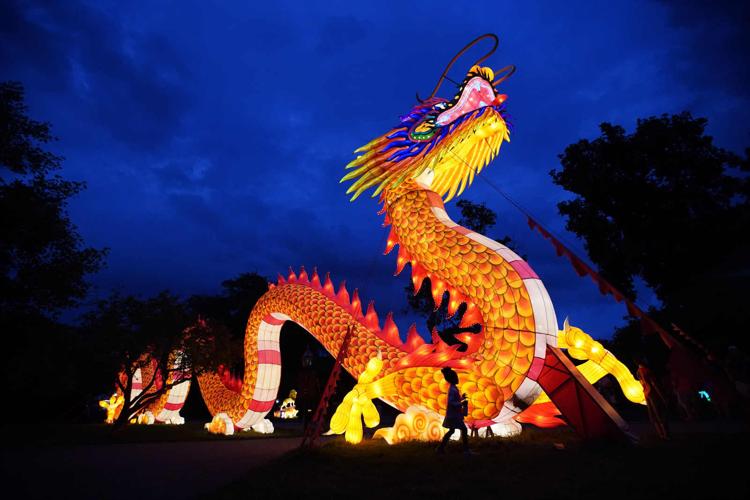 Matea Kuest, 5, is dwarfed by the giant dragon at "Zoomagination: Festival of Lanterns and Lights" at the Buffalo Zoo.