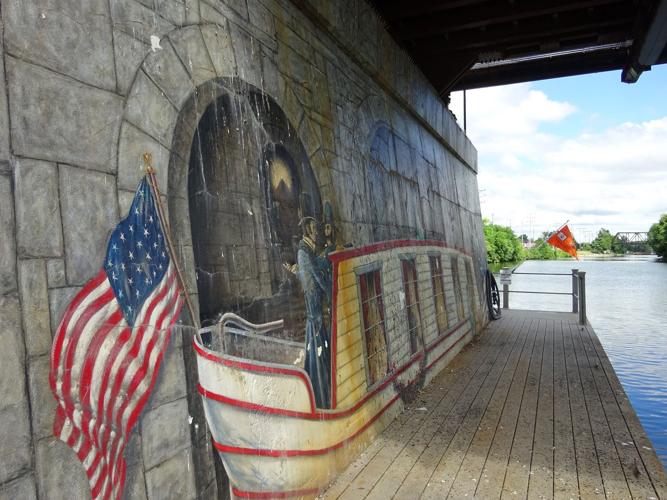 One of the murals in Newark 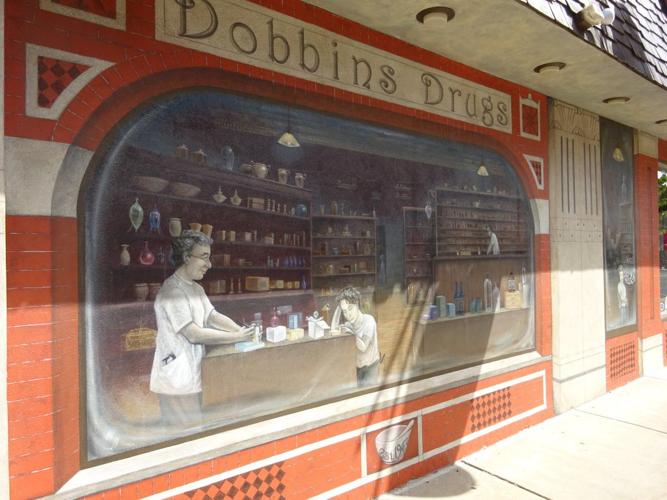 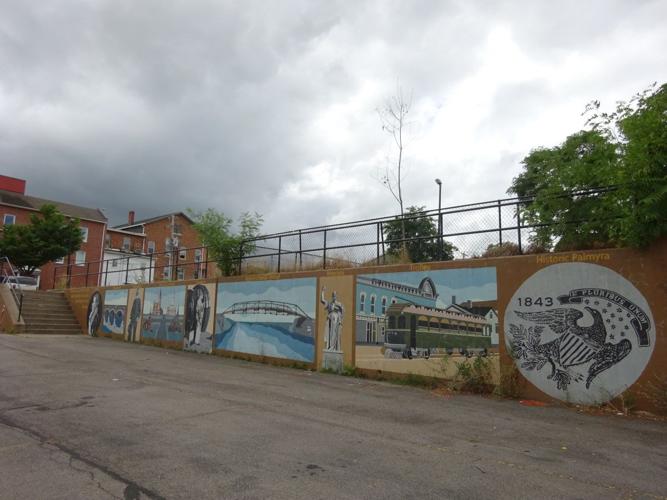 Support this work for $1 a month
By Christine Smyczynski

Public art in the form of murals has become popular in recent years. The trend is particularly noticeable just east of Rochester in Wayne County.

I’ve always wanted to visit this area of the state but never had the opportunity to do so until this past summer, when my daughter and I were doing research for a travel guidebook. We ended up making a couple visits to this area to see all the murals, but if you got an early start, you could probably see them all in one day.

Mark DeCracker had the idea for what came to be known as Mural Mania in 2007, when he wanted to have a few murals painted in the village of Lyons to help revitalize the downtown area and to tell the history of the area through public art. Along with mural artist James Zeger and the late Noel Dobbins, the idea was to install more than 50 miles of murals to communities along the Erie Canal.

Our first stop was Macedon, about 90 minutes from Buffalo, home to two murals. The first, titled “They Walked Before Us,” on West Main Street, shows a 1910 view of Macedon’s Main Street.

The second is around the corner on the side of a picnic pavilion in Lock 30 Canal Park. The mural, titled “Historical Presence in the Village,” depicts "Old Betsy," an 1864 fire pumper that was restored by the fire department in 1983. Also shown in the mural is Elmer Clark, the longtime fire chief for whom the picnic pavilion is named. The mural also shows a canal boat moving through the canal.

Follow Route 31 east toward Palmyra, referred to as the “Queen of the Erie Canal Towns.” Besides the two large murals, the village is home to several museums and other attractions.

The first mural is on the wall of a parking lot at 133 Market St. Titled “Palmyra’s History,” it depicts significant people and places in Palmyra’s history, including General John Swift, the founder of Palmyra, William Sampson, a Spanish-American War hero who was a resident of Palmyra, and Moroni, the angel said to have given Joseph Smith, the founder of the Mormon church, ancient records on nearby Hill Cumorah.

Places depicted in the mural include the four churches on the corner of Main and Church Streets. Palmyra is believed to be the only city or village in the United States to have four churches at a four corner intersection facing each other.

Also on the mural is Garlock Sealing, founded in Palmyra in 1887, which played an important role in the village’s economy. The Aldrich Change Bridge, located by Erie Canal lock 29, is also depicted in the mural, as are trolleys, an important means of transportation which served Palmyra between 1906 and 1931.

If you have the time, there are several historic museum sites located across the street from the mural, including the Palmyra History Museum, the Erie Canal Depot, the William Phelps General Store Museum, and the Print Shop. Around the corner, the Alling Coverlet Museum, open seasonally, has the largest collection of hand-woven coverlets in the United States. The village’s second mural, “Palmyra Main Street,” which depicts Main Street past and present, is painted on a fence near the Port of Palmyra Marina.

Our next stop was Newark, where we checked out the Hoffman Clock Museum in the Newark Public Library. This museum is the collection of watchmaker and jeweler Augustus Hoffman (1858-1945). It is one of the largest collections of New York State made clocks in the country.

Murals in Newark include a large mural on the side of the Alex Eligh Community Center, which depicts young people participating in sporting activities. There are also murals located along the Erie Canal in the T. Spencer Knight Canal Port. Be sure to walk all the way to the bridge, as there is a canal boat scene painted on the wall right under the bridge.

Lyons, the next town along the canal, has numerous murals. Winston’s Dream,” the first of the murals to be painted, can be seen from the Leach Road bridge. Formerly a garbage pit, this area was transformed into a park and the mural painted by community volunteers.

On the corner of Leach Road and Water Street is the H.G. Hotchkiss Essential Oil Building,  now a museum operated by the Lyons Heritage Society. Lyons is referred to as the “peppermint village,” because of the peppermint oil industry founded here in 1841 by Hiram Hotchkiss. The company was one of the world’s largest producers of peppermint oil. Outside the building, a mural titled “The Hotchkiss,” has scenes that depict the peppermint oil business in Lyons.

We parked in the large lot on Montezuma Street and walked to see the rest of the murals in the downtown area. From the parking lot you will see a huge mural located in an alleyway on the side of a building at 28 Canal St. Titled “Believe All That You Can Achieve,” the mural reflects the goals of the youths participating in the Goal Chaserz program, which helped paint the mural.

Across Montezuma Street, “Steamer Hose No. 2,” features a 1936 pumper from the Lyons Fire Department. On the other side of the street, “Street of Dreams,” portrays downtown Lyons in 1915.

We headed to The Old Pharmacy Gift Shop & Dobbins Drugs on William Street. The mural on the front of the store, “Generations,” shows an old-fashioned apothecary with three generations of the Dobbins family depicted.

In an alleyway directly across the street, “Generations of Smiles,” commissioned by dentist Randy Mitchell, memorializes another dentist, Dr. Arthur Santelli, who had his office in this area.

Another mural titled “Canal Town Mural,” located on a building on Forgham Street, depicts local scenes from the 1800s. It is best viewed from the adjacent McDonald’s parking lot.

There are several more murals located in Clyde. The mural on the front of the Clyde-Savannah library depicts the Clyde Trolley Station in the early 1900s. Murals on the side of the Clyde Hardware Store offer windows into the past of what one might have bought at the hardware store in the late 1800’s. Around the corner, “Citizen’s Bank,” on the former Citizen Bank building, shows the interior of the bank as it appeared in the 1930s.

On the side of the car wash on Sodus Street, “Lincoln’s Visit to Clyde,” memorializes the stop by Lincoln’s Inaugural Train in Clyde on Feb. 18, 1861, the only stop the train made between Rochester and Syracuse. Another mural, located on the side of the Clyde Grange Building, shows a number of scenes from Clyde’s history.

Eagle is an excellent play-by-play announcer with a high excitement level on key plays, a good sense of humor and apparently a deep understanding of pop music and the chaos theory.

It is a little surprising since Pittsburgh is 1-3 at this point but the decision was made before the Steelers lost to the New York Jets Sunday.

The restaurant, 370 Seneca St., features a seasonal menu of dishes from Fabio Consonni and Rita DiTondo in sun-washed surroundings.

The three-screen theater was an independent art house for upscale and foreign films before the pandemic.

The increasing stardom of Bills quarterback Josh Allen is exemplified by how many advertisers now want him to hawk their products in commercials, Pergament says.

Harlan and Green were perfect for a strange game that saw the Bills dominate in yards and time of possession and still lose.

At Gypsy Parlor, a genuine West Side neighborhood restaurant

Since opening in 2013, Gypsy Parlor offers food and drink to a West Side whose hungers and thirsts have become more diverse over the decades.

Loretta Lynn, the "Coal Miner's Daughter" whose frank songs about Appalachian womanhood made her a pillar of country music, has died at age 90.

“I was this little Black girl from a small town,” MacInnis says. “And that’s when I thought, ‘I can do this.’ ”

One of the murals in Newark