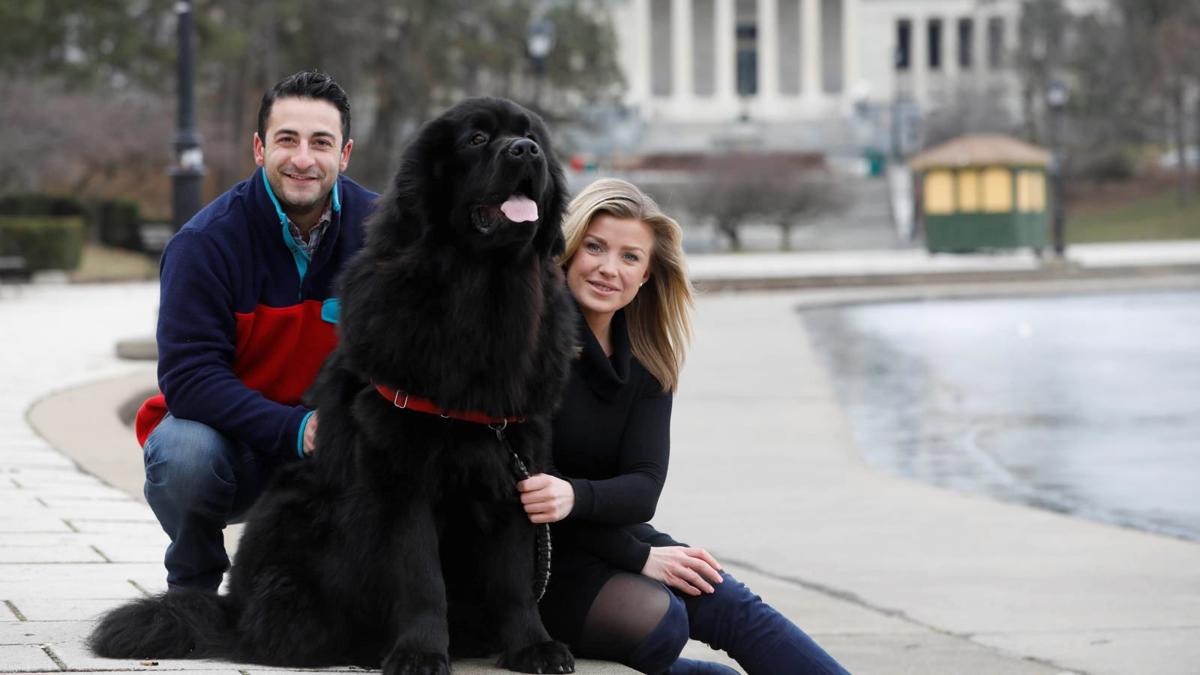 Jonah Javad and Nalino Shapiro with their dog Bogey, whom Javad says is "their 160-pound engagement ring." (Derek Gee/Buffalo News) 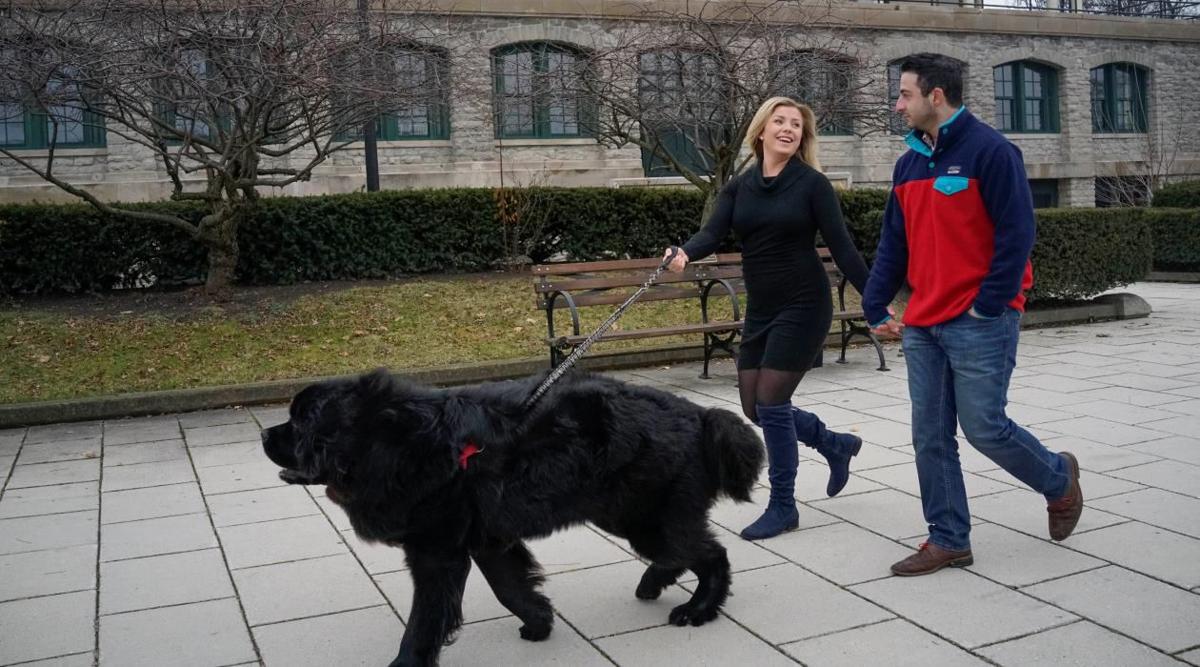 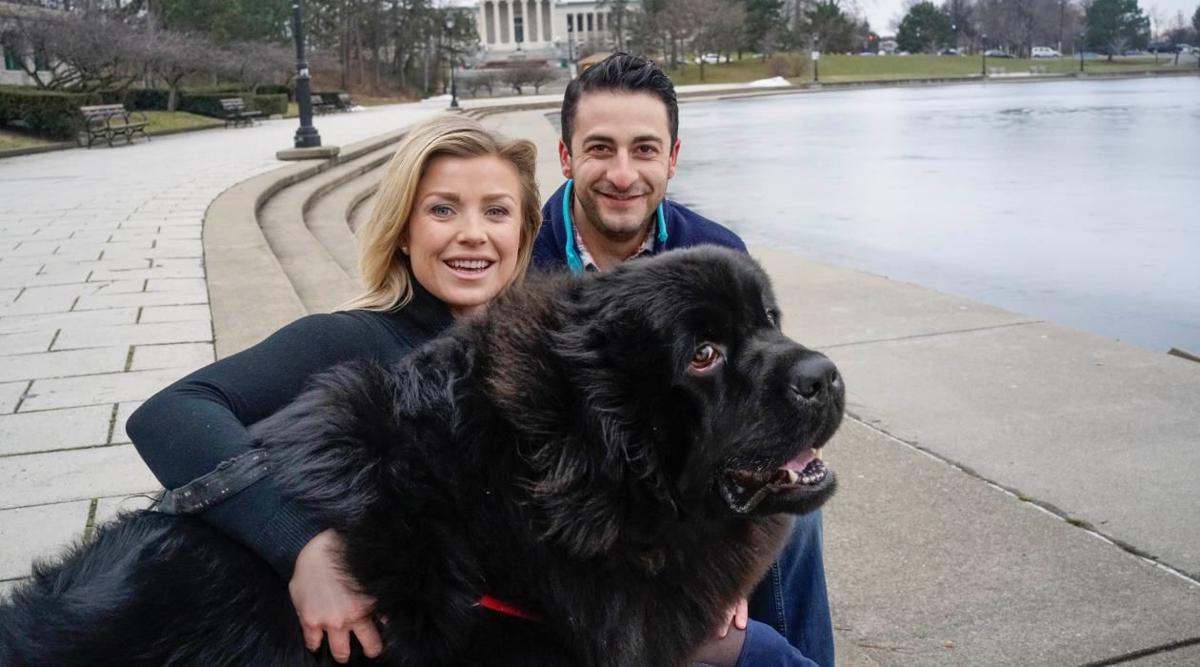 On their second date, Channel 4 anchor Nalina Shapiro and Channel 2 sportscaster Jonah Javad took a five-hour ride to an Of Monsters and Men concert in Columbus, Ohio.

Before the trip, Javad's father gave unsolicited advice about being "stuck in a car" with someone you barely know for a 10-hour round trip.

"He said, 'Well, son, you will know if you are right for somebody if you are forced to spend 10 hours right next to them in a car'," Javad said in an interview, as Shapiro sat next to him at a local coffee shop.

Two and a half years later, they will be driving separate cars for 21 hours from Buffalo to Dallas before Javad starts his job at WFAA-TV in March in the country's No. 5 TV market. They plan to leave Thursday. Javad's last on-air appearance here will be on Sports Talk Sunday, while Shapiro works through Wednesday.

They both expected to spend only a few years in Buffalo upon arriving in their early 20s. WIVB-TV's Shapiro, 29, spent eight years here; Javad, 27, five and half years.

"She hates it," smiled Javad, of his mentioning that he is younger.

The two were set up by a Channel 4 producer from Javad's alma mater, the University of Missouri, and both admit they did not have high expectations.

"I don't want this to come across the wrong way but before I met him, you have this idea here is a good-looking guy who is very confident, comes across as cocky, an immaculate dresser," Shapiro said. "I stereotyped him. ... Everything I thought was completely different. He is an incredibly thoughtful person who cares deeply about social issues, is well-traveled, has family in Europe. … He comes from an incredibly colorful and diverse background that you don't get sometimes from the sports guy you see on TV."

"I read her bio that says she rides horses and plays the violin and here I am going, 'This is going to be a snoozer of a setup," Javad said.

Upon meeting at a bar, Shapiro answered that misguided view with a simple question: "Do you want to do a shot?"

So they gave it a shot.

Shapiro sees Javad as a softy, unlike his sometimes arrogant TV persona.

"Jonah is thoughtful, extremely loving, concerned, always wants the best for everybody," Shapiro said before an embarrassed Javad interrupted her.

"You reading my horoscope?" he cracked.

"He is romantic," said Shapiro, continuing, "He is really good at planning things. He is very organized. He is a great cook. He is into health and wellness, keeps me in check. He is a good influence. … And he is fun. We have a lot of fun together."

Javad sees Shapiro as a good influence, too.

"I've never met someone who breaks me out of my comfort zone," he said. "I like people who bring that positive energy. From the first day we met there was kind of that instant connection."

There are no written rules about dating people from rival stations, but Javad said the unwritten rules were understood without discussion.

"We'll vent our frustrations about work," said Javad. "We'll air our grievances like in 'Seinfeld,' but we won't go in depth into what our stations are working on."

"We're also very competitive and we want to be the best at what we do," Shapiro said. "We just happened to fall in love."

Shortly after they moved in together, they discussed what they would do if either received a great out-of-town opportunity.

"I think it came up pretty early in our relationship, once we knew that we really loved each other and we wanted to make this work," Shapiro said.

She calls the move to Dallas, where Javad will work with legendary sportscaster Dale Hansen, a no-brainer.

"He just lit up when he got this opportunity in a top-five market working under someone he has always looked up to," Shapiro said. "His happiness makes me happy. I know that sounds really corny. It all clicked for him and I knew that he is the person I want to be with. I don’t care if we're not married or engaged. We talk about these things."

"I don't like societal pressure telling me when I need to put a ring on," added Javad, who refers to their Newfoundland dog, Bogey, as "their 160-pound engagement ring."

"We don't like to be confined to what people think we should do," added Shapiro. "We really want to do what makes us happy."

They gave up opportunities here. Javad, who matured from his early cocky days, had a chance to become Channel 2's sports director. Shapiro, who grew in the anchor seat, looked like the eventual heir apparent to Jacquie Walker as Channel 4's main female anchor.

"I thought I was finally ready for a move," said Javad before revealing something that might surprise Channel 2 viewers.

"It was similar to college in that right when I was doubting myself and doubting the career I was in, this opportunity came," he said.

Now there's a headline: Jonah Javad had self-doubts. Why?

"Because this business is so competitive and the future is so unknown," Javad said.

Javad said he would have moved with Shapiro if she had gotten a similar offer. She has a job in Dallas outside TV news.

"If she had gotten some huge job that would have uprooted me from my career, I would have done it in a heartbeat," Javad said. "I told her that in the first year of dating."

They appreciated their time in Western New York.

"I'd be lying if I said I accepted Buffalo from Day One," Javad said. "I thought it would be a stepping stone. I thought I would be here for two years. … But life gets in the way. I think anybody who is from here, or not from here and still lives here, knows that this place becomes part of you. It is infectious. I never lived in a place that has such a strong sense of community as Buffalo. … While Buffalo wasn't my first choice to spend five and a half years in my 20s, I'm thankful that it was."

"Buffalo has taught me a lot about myself," Shapiro said. "It has made my skin thicker. It has definitely stolen a piece of my heart. … It does feel like a home to me. I know I'll be back. I have a lot of friends here. I've made a lot of memories here, good and bad. But I don't have any regrets because it led me to where we are today. I am going on a new adventure with Jonah and I am so thankful for that."

Jonah Javad and Nalino Shapiro with their dog Bogey, whom Javad says is "their 160-pound engagement ring." (Derek Gee/Buffalo News)