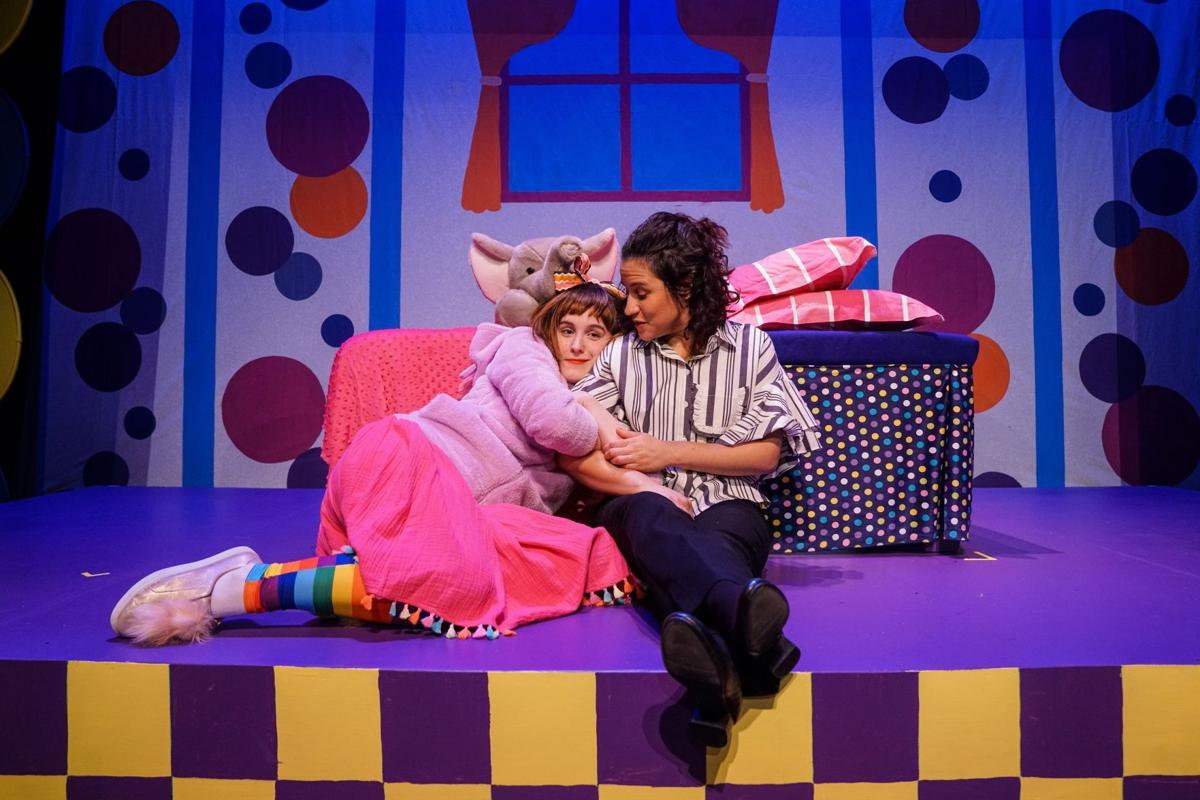 Renee Landrigan plays Junie B. Jones and Melinda Capeles is her Mom in "Junie B. Jones is Not A Crook" at the Theatre of Youth. (Photo by Benjamin Richey) 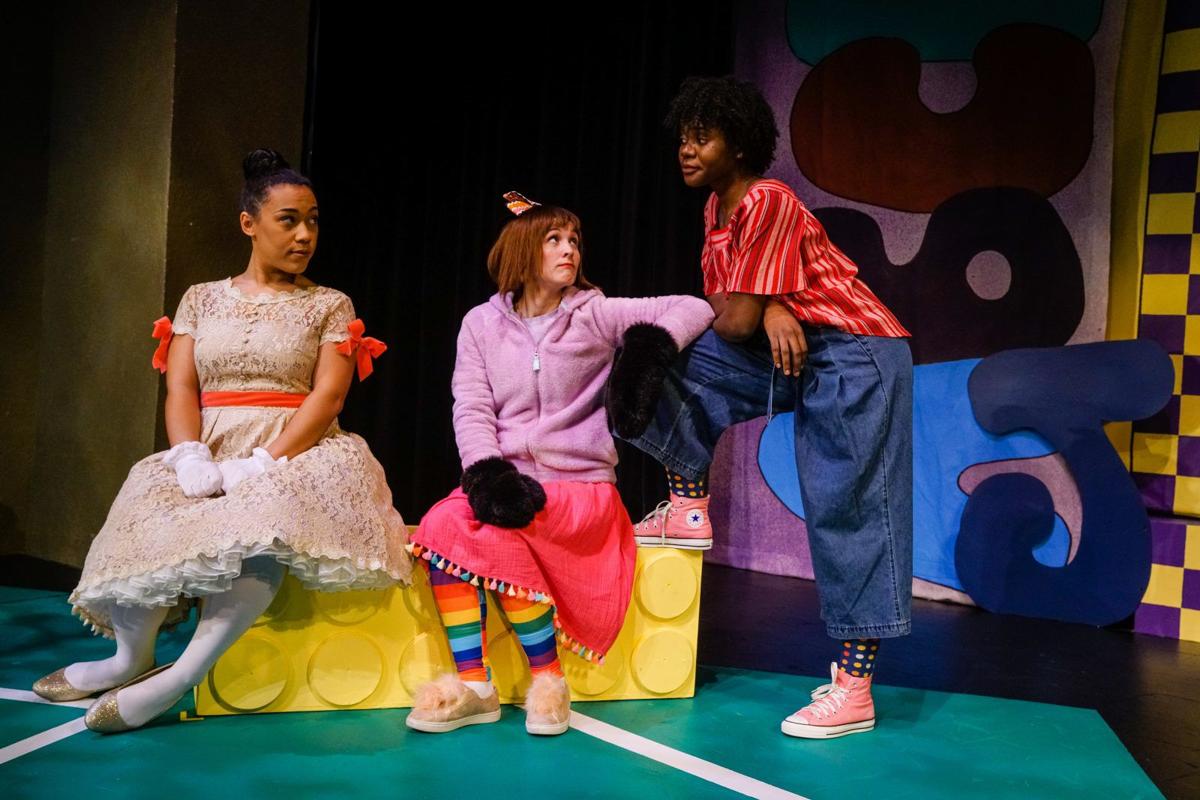 Junie B. Jones is back, and going through a rough patch.

She’s lost her favorite fuzzy mittens. The black ones that give her comfort, that she wears proudly, that she uses to gain the attention of friends and romantic interests. But now they’re gone, and her carefree kindergarten days just aren’t the same.

With “Junie B. Jones Is Not a Crook,” the latest from Theatre of Youth, young audiences will learn not just about the pain of losing something so important, but the coping mechanism they can reach for – and a few to avoid – in the healing process.

Parents, know this: Whereas some productions here cater to the sensibilities of both children and adults, with silly humor for the little ones and wry wit for the grown-ups, some shows work in a more instructive way. Education by way of a goofy case study. Though this does not push the artistic needle with its writing or presentation, it serves an important purpose that’s worth the time. You should enjoy this just fine, or even just the sweetness of your kid sitting in your lap for a good view, but this one’s for them. And at just over an hour, everyone is happy.

If there’s anything the world of children’s theater knows about its audience, it’s that kids are keener about mature emotions than adults sometimes give them credit for. They know what’s up, what makes them tick, what agitates their comfort zone and makes them feel uneasy. (It’s the same things that make adults feel such feelings.) Any smart children’s theater, such as TOY, knows when and how to speak to them in a way that meets them where they’re at, and nudges them along toward maturity.

The production does a good job with its material, which at times feels too procedural: This thing happens, and then this occurs, and then another thing takes place. But this fine cast fills in the gaps where necessary.

Renee Landrigan returns to the leading role after last season’s “Jingle Bells, Batman Smells” holiday show. She’s effervescent and inviting in the role, speaking to kids with an inviting wink, signaling a nonverbal code of trust. Landrigan also infuses Jones with just enough of a punkish attitude – ambition, let’s call it – to activate their own pursuits.

Her eyes are on the prize (those mittens) but they’re also on the new boy in class: Handsome Warren, played with cool and charm by Connor Graham. When Jones is suspected of stealing a fancy pen from the lost and found, where her mittens were nowhere to be seen, she learns the hard truth about possession and sharing. Sometimes you lose what you love, and can’t have what you want.

Landrigan and Graham are in good company. Dominique Kempf and Christine Seshie are perfectly quirky as Junie’s classmates, each with their own perspective on material happiness. Kempf adds a quietly hilarious turn as the grumpy office secretary, her posture humorously aged. Brendan Didio serves a number of small roles with a bursting adorability; he’s a lot of fun to watch, and sure to incite some guffaws in those tiny critics. Daniel Torres brings a calm demeanor to the class as Junie’s voice of reason, and a nerdish appeal to an adult administrator. Melinda Capeles plays their teacher and Junie’s mother, both with polished personality and timing.

The production understands its story very well, and delivers on its emotions with ease. Emma Schimminger’s patterned lighting excites with texture and depth, and Chester Popiolkowski’s sound design evokes the raging energy of an elementary school. But Ken Shaw’s set – or rather, the art direction of his design – normally a shining star on the TOY stage, looks inconsistent in spots, as if rushed through. What he does upstage with a false proscenium, offering quick scene changes for imaginary spaces, is inspired and wonderfully decorated, but the main stage of action has less cohesive a design.

This won’t be enough to distract the little ones, however. This is a smart trip to the theater.

“Junie B. Jones Is Not a Crook”

Alan Pergament: Rick Jeanneret suggests his future is up to Sabres; Buffalo Bills primed to get some night games

At the end of Saturday's MSG telecast, Jeanneret thanked the behind-the-scenes personnel who have worked with him before adding: “I hope to have the opportunity to work with them again.”

Jeff Miers: Farewell, for now, to the consecrated ground of the Tralf Music Hall

The sacred space upstairs at 622 Main St. will be missed by generations of Buffalo music lovers and musicians, Miers says. But it will never be forgotten.

Tawny Kitaen also starred as the fiancee to Tom Hanks' character in the comedy "Bachelor Party," and as Jerry Seinfeld's girlfriend in a 1991 episode of "Seinfeld."

Even as restrictions loosen and more events are held, these markets – already underway in some communities – haven't lost their luster.

Jeff Simon: Basking in the bombast of sports spieler Stephen A. Smith

It's important to understand that Smith is no mere performer or prejudiced pundit slinging witless affections around at bruising volume, he's a longtime ultra-knowledgeable sports reporter

Renee Landrigan plays Junie B. Jones and Melinda Capeles is her Mom in "Junie B. Jones is Not A Crook" at the Theatre of Youth. (Photo by Benjamin Richey)