It's no secret that I dislike sitcoms. I've felt that way since my family literally had the first TV on the block (an RCA bought by my father to keep my older brother occupied while he was laid up after corrective foot surgery).

I've been declaring my distaste since I first started subbing for News TV columnist Gary Deeb in 1969.

So why then am I telling you gleefully that my favorite shows on television in the past year have been sitcoms – "Hacks" on HBO/Max and "The Kominsky Method" on Netflix?

Note that both are from the brave new world of digital TV, rather than networks or cable. Both can be watched in segments of a half hour or so. They can also be binged in large clumps that will take up a good part of your day.

One of them –"The Kominsky Method" – featured one of the most surprising but logical and satisfying plot wrenches I've ever seen on a TV show. In a cold, brutal opening, we learned of the death of one of the show's most compelling characters when we were told of it in the fatuous funeral eulogy of his grandson, the grisly Scientologist.

It was a wallop of a plot point. But it wasn't presented that way. It was presented as a simple side-eye gag about the off-putting language of Scientology. It's brilliantly true to the show in every way – it's an ultra-professional, gag-rich sitcom about show business, old age and mortality. Some of the most realistic stuff about being old and male I've seen on TV has been on "The Kominsky Method," a show about a Hollywood acting teacher. Almost all of it is very funny about the way so many real people tend to be. Jolly rue about physical decline is the elementary subject of so much senior social life.

An old colleague once told me that when he and his buddies got together for a catch-up lunch, they'd kick it off with an "organ recital" – a recounting of the latest conditions and maladies afflicting them, all those prostates, hearts, colons and glands that had been recently examined and found wanting. Those first steps on the road to mortality are so often treated as funny. Since they are irresistible in the most dramatic way, humor becomes the first refuge of the suffering (Robert Frost: "God, please forgive my little jokes on thee and I'll forgive thy great big one on me.").

As if that weren't enough to impress you about the final season of Michael Douglas and Chuck Lorre's "The Kominsky Method," there was one stunning cast addition in its final season. Added to the cast in a prominent role was a former Douglas co-star in some of his most successful films – Kathleen Turner, whose voice is now pitched an octave lower and whose physical appearance, due to medication, is vastly different from her most ascendant years.

Once she played roles as Douglas' glamorous inamorata and vengeful wife (in Danny DeVito's pitch black "War of the Roses," her final gesture ends the film with one of the great moments in American film comedy). Now she plays Kominsky's ultra-sardonic ex-wife, a doctor in "doctors without borders" whose life wisdom, after all her years and experiences, now approaches totality.

Seeing the perfectly apt casting of the mature Turner in "The Kominsky Method" was an exciting reminder of what is possible in television if you've got producers with the clout of Douglas and Lorre who can tell scaredy-cat executives to go away and leave everyone alone. (No broadcast or cable network in our era would try to get away with the senior Turner in such a major prominent role. They're just not built for that much reality in their fictions.)

Turner is still a terrific actress. And "The Kominsky Method" was a beacon of truth in a TV world of pervasive juvenilia.

At the same time that "The Kominsky Method" and "Hacks" are completely au courant in their origins (Netflix, HBO/Max), they are both ancient in the TV sitcom world. That's because they are TV sitcoms about show business itself.

They were some of the first comic stories told on television. That's because they came directly from radio, which featured them all the time to carry people from nightclubs and theaters into living rooms and bedrooms.

Think of George Burns and Gracie Allen playing themselves. Or Danny Thomas playing nightclub comic Danny Williams in "Make Room for Daddy." Or Jack Benny playing Jack Benny. And Ozzie and Harriett playing Ozzie and Harriett (somehow transplanted to the Midwest). And Dick Van Dyke fictionalized as a writer for the star played by Carl Reiner as a funny fictional version of neurotic tyrant Sid Caesar. Think especially of the smash hit "I Love Lucy" where Lucy Ricardo played the zany wife constantly trying get into bandleader Ricky Ricardo's nightclub act.

And now on "Hacks" – a great sitcom about women in the comedy business – Jean Smart plays Deborah Vance, a queenly Vegas comic who's a hallucination somehow registering as Joan Rivers if she'd been as successful a comic as Celine Dion had been a singer.

In other words, she's a female comic with all the money in the world, a taste for antiques and a frequent berth on QVC where she can go to hawk God knows what. She has a lot of plastic surgery and does the occasional lucrative gig on the road in places she not-so-secretly deplores.

Hannah Einbinder – the very real daughter of Laraine Newman – plays the 25-year-old comedy writer Ava who has been hired to punch up Deborah's act so that it resembles something from the era of Beyonce, if not exactly Cardi B. Christopher McDonald plays the seductive casino chief who sleeps with Deborah the night before he tells her he's bumping her off her lucrative weekend shows.

"Hacks" is an incredible TV rarity – a genuinely sympathetic look at showbiz "hacks" as ultra-pros who have lost younger generation fans forever but whose place in the hearts and memories of their own generation is immutable.

Grown women are blown away by both the insight into real female society and the uncanny accuracy of women in generational conflict. These "Hacks" are too smart and soulful to be anyone's idea of social refuse.

So what you watch on the show is the first season of the life of a hugely wealthy female comic who somehow devises a truth-telling act about her life rather than the rhythmic machine-gunning of gags from her chronological era.

I've always thought that the real self-destructive descendant of Lenny Bruce's troublesome defiance wasn't George Carlin or Richard Pryor but rather Joan Rivers who always said she was an actress playing a comedian.

As terrific as "Hacks" is, that's where, I think, it can't begin to measure up to its most obvious source material.

By all means, don't miss "Hacks" on HBO/Max's streaming site. But the film to see is Ricki Stern's and Annie Sundberg's "Joan Rivers: A Piece of Work" documentary, a haunting, lacerating portrait of the very real Joan Rivers,  who tells us that anger is her constant fuel and "in this business, you're mud for your whole life."

The real Joan Rivers – who began life as Joan Molinsky – was weirdly believable when she claimed a one-night stand with Robert Mitchum and another with Johnny Carson that began her life as Carson's regular fill-in when he went on vacation.

Rivers was always ahead of her time, for better or for worse. You see that right now when her status as fame's nastiest troll proved to pave the way for the internet world we're living in. Rivers, a lifelong Republican, also paved the way for both the woke world that her truths made necessary and a recent president you may still remember.

If only Rivers had lived a few more years. As it was, she died of one too many surgeries (this one on her throat) in an America whose future reality she'd have understood perfectly, unlike the rest of us.

Smart is, far and away, the right actress for "Hacks," even if in its next season they decide to hew things a bit more closely to the real Rivers.

It's more than good enough now. But its future possibilities are mind-blowing.

Jeff Simon: Thanks to Simone Biles, 2021 was the year the Olympics finally grew up

She performed in one event – the balance beam – where she won a bronze medal Tuesday. That's baby stuff for a fabled medal collector like Biles. But what she accomplished was much bigger.

Jeff Simon: In praise of the $6.50 T-shirt and the man who made it cool

I will always be grateful to Don Johnson for being the original TV model for the male fashion I've found to be infinitely useful in my semi-retired maturity, writes Jeff Simon.

"I feel no guilt whatsoever about my categorical affection for the 'F and F' fantasias," Simon says.

Jeff Simon: You're in the writer's room. Should these six season finales end this way?

There is nothing "kind" about making other people laugh by dunking you in a water tank. Nor is there anything kind about scaring people – just for fun, of course.

"How could I resist the film I'd have most wanted to take my 11-year old grandson to? The one film, in fact, that seems perfect for 11-year olds of all ages, as the dreadful cutesy cliche goes," writes Jeff Simon. 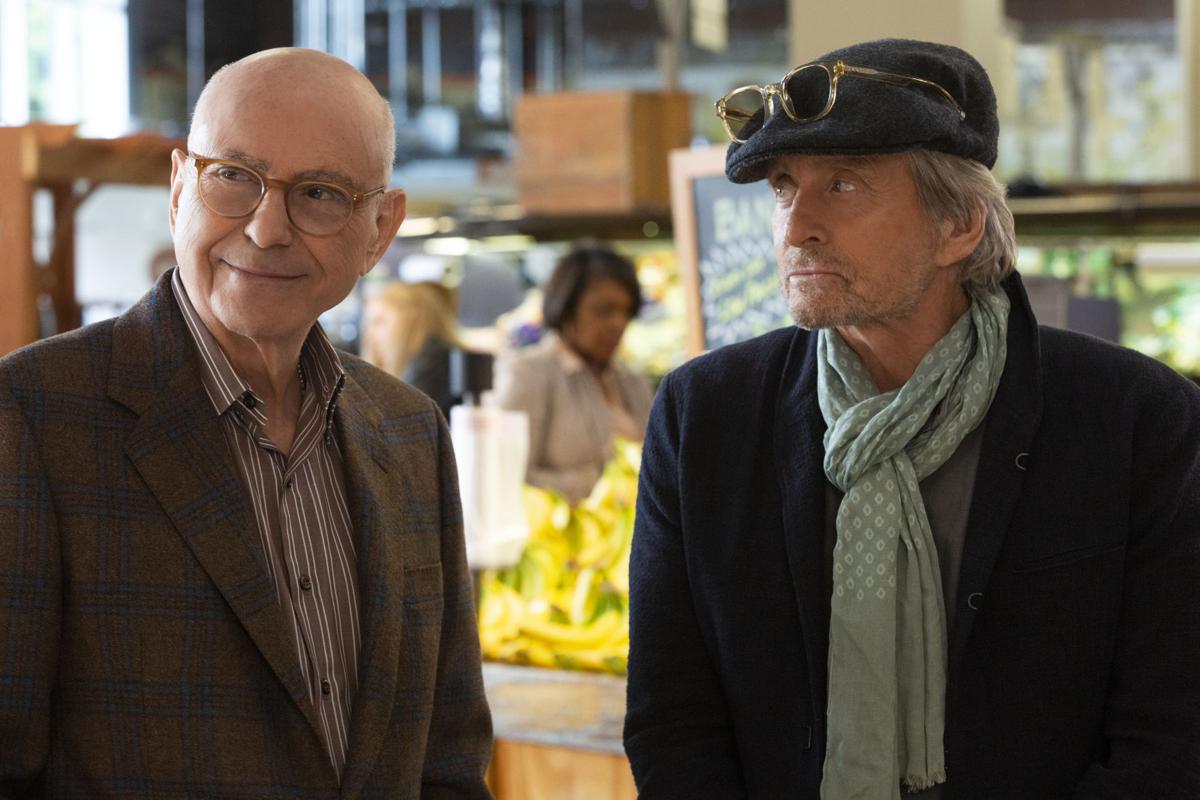 Alan Arkin and Michael Douglas in the Netflix series "The Kominsky Method."

Jean Smart plays a woman who lives for her work in "Hacks," a new HBO Max comedy.